Last update, 10/08/2021 – In 2022, the Erasmus programme celebrates its 35th anniversary. The European Commission has published the 6 competition designs still in the running for the joint €2 commemorative 2022 Erasmus 2 euro coin. The coin will be issued in amost of  the 19 Member States of the euro area.

Coins will be issued from july the first 2022

A modified design, since its first presentation

A second modified version was presented at the time of the announcement of the 2022 €2 ERASMUS issued by Cyprus.
In the design of this second version, the mention of the country is moved to the bottom right.
the words “1987-2022 ERASMUS PROGRAM” are written in a bolder font with the letters tighter.
The text block creates a certain heaviness that covers the character of Erasmus much more. But this new design leaves more space for the mention of the issuing country.
Moreover the initials of the engraver J.J. (Joaquin JIMENEZ, Engraver in chief of Monnaie de Paris -french mint) were added on version 2, under the top of the pencil that Erasmus holds.

First version (left) and second version (right)
The country mention was originally in the center of the coin.

The Netherlands have not minted €2 commemorative coins for several years. The country is following the recommendations of the european institutions who ask that €2 strikes should be greatly reduced given the stocks of genuine €2 coins that are still in the vaults of European central banks.

Nonetheless, Erwin, one of our dutch readers indicated us on 08/22/2021 that dutch Ministery of Finances did confirm him the decision of issuing a dutch €2 commemorative coin ERASMUS in 2022. It is confirmed by UE on 08/27/2021.

At time, only the mintages of the coins minted by the following countries are known:

BELGIUM
– 1 000 000 coins (850 000 for circulation + 150 000 for collectors – BU version)
ESTONIA
– 988 000 coins for circulation and 12 000 coins for collectors (numismatic quality not specified)
A first project of coin without the signature J.J. (for Joaquin JIMENEZ) had been proposed.
But finally, the final project integrates the signature of the Engraver in chief of the “Monnaie de Paris” (french mint)

FINLAND
– 800,000 coins for circulation, with no further details on a coin quota for the collectors’ market.
The mention of the issuing country “FI” appears in the center of the coin and the mintmark of Mint of Finland is engraved at 6 hrs. The words “OHJELMA” and “PROGRAMMET” are the translation of the word “Program” in Finnish and Swedish. The coin will be issued on 07/01/2022. 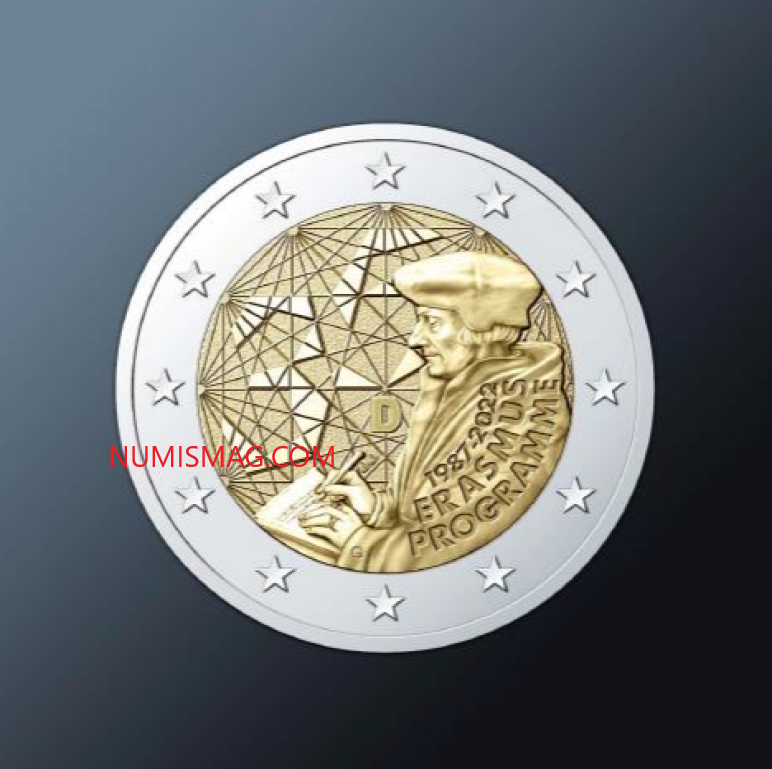 In the heart of the coin appears the name of the issuing country, “LIETUVA” for Lithuania. The mintmark of the Mint of Lithuania also appears on this face of the coin. The mintmark of the Monnaie de Paris as well as the mark of its engraver in chief, JAQUIN JIMENEZ, will also be engraved on this face. The two initials of the engraver “J.J” are also engraved under the pen held by ERASME. 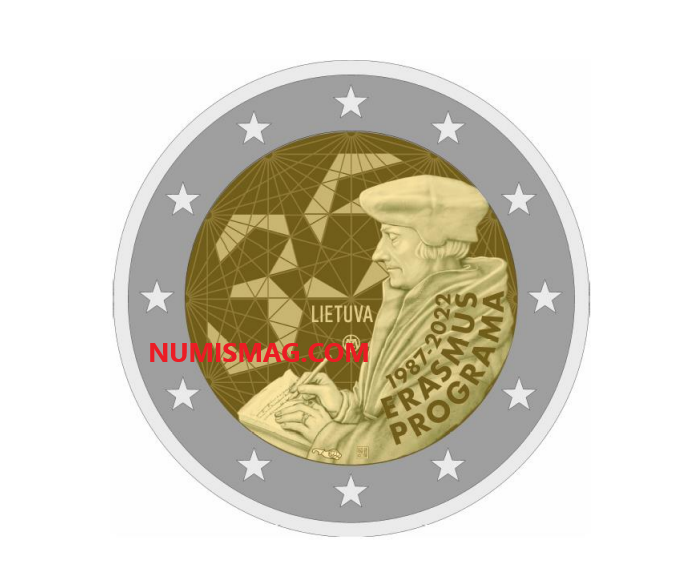 First version
A second version was presented to the European authorities on 09/17/2021. The name of the issuing country is no longer in the center of the coin but at the limit between the insert and the crown. The marks of the Monnaie de Paris (french mint) and J. JIMENEZ (engraver) have disappeared. The two initials of the engraver under the pen of ERASMES (J.J.) are also missing. These two letters appear on all the other designs presented by the countries that will issue a €2 ERASMUS coin in 2022. This is probably an oversight…

Even if one can have a doubt, the possibility that the dutch coin would be struck by another Mint than the KNM (Mint of the Netherlands) is thus considered by the Dutch government. It would be surprising if another national mint was chosen to mint a coin dedicated to an emblematic figure of the Dutch philosophical literature, worldwide known!

It seems that the signature J.J. (JOAQUIN JIMENEZ) does not appear on this visual. This is probably an error that will be rectified before the coin is struck. 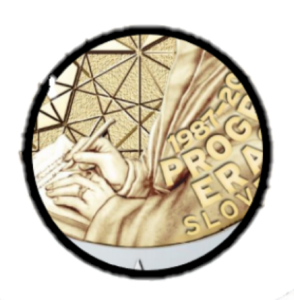 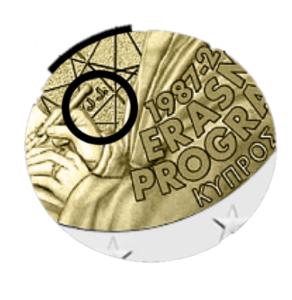 This coin was designed by artist Thomas SERRES for GERMANY.

The overlapping silhouettes of the heads of young people facing in different directions contain numbers and letters dispersed across the whole coin that spell out “ERASMUS PROGRAMME 1987–2022”.
The design is reminiscent of a map and symbolically represents the international European exchange of students and trainees and the network of educational establishments and training locations.

This project was presented by Belgium and designed by the artist Iris BRUIJNS (click here to read IRIS project dedicated article).

It is not Luc LUYCX (the father of the common sides of the euro circulation coins) who designed this coin, whereas generally it is the engraver who designs the entire Belgian annual numismatic program.

The Erasmus programme gives all participants such as students, teachers and organizations the opportunity to gain a unique experience.
On the one hand, there is the acquisition of knowledge, represented by a book as a sign of education and training.
Erasmus is a European programme, but it spreads not only within Europe through the Programme countries, but all over the world through the Partner countries.
Erasmus mobility offers exceptional opportunities. This is symbolised in the design by the arrows over the globe, which represent the numerous ways in which exchanges can take place: physical, educational and cultural exchanges.
There are also people on the globe who make the link with learning, travelling, sports and friendship, all elements that are covered in the programme.

The design represents how the Erasmus program, during these 35 years, gave a great opportunity, to all the citizens, to challenge themselves. The design illustrates the youth and the desire to get involved in a new adventure. The route is the path of personal growth, represented by different symbols: sport, education, travel, independence, freedom, equality and job opportunity; values that this program always embraced. Erasmus is an all-round experience that wants to lead to a higher empathy and inclusion level to make democracy every day more efficient.

The design shows the bonding between young people, their arms extended around each other’s shoulders and the word Erasmus, like an umbrella, above them. In the artist’s opinion, this is what the Erasmus programme is all about.
Under its umbrella, Erasmus gives young university students from all countries in Europe the opportunity to immerse themselves in an academic and cultural environment other than their own, and to broaden their minds and horizons by getting to know other countries, other cultures and other students just like them.
Our old continent has a vibrant youth, on which it pins its hopes of becoming an inclusive and diverse place to live and work, free of stereotypes, where all people can forge ties of friendship and prosper in peace, equality and democracy.

This design is a homage to connections. It hopes to materialize the union in diversity and the global growth to which the Erasmus program has led.
The small circles symbolise the countries and the schools, but most of all the communities that embrace the emissaries of new ideas and hopes that are the youths and the students. The elliptical curves represent the exchanges, communication and contact in proximity for which the information era, which has shortened time and space, has not found a substitute.

This design is a mix of two major elements of the Erasmus programme: the original intellectual inspiration, Erasmus himself, and the allegory of its influence over Europe. The first one is symbolised by one of the most known depictions of Erasmus. The second one is symbolised by a beam of links going across the coin from a beacon to another, representing the numerous intellectual and human exchanges between the European students. As a reference to Europe, some of these links form other stars, born from the synergy between the countries. Figure 35, for the 35th anniversary, comes out from the stars in a contemporary graphical style.

This design is the artwork of Joaquin JIMENEZ, engraver in chief of “Monnaie de Paris” (french mint).