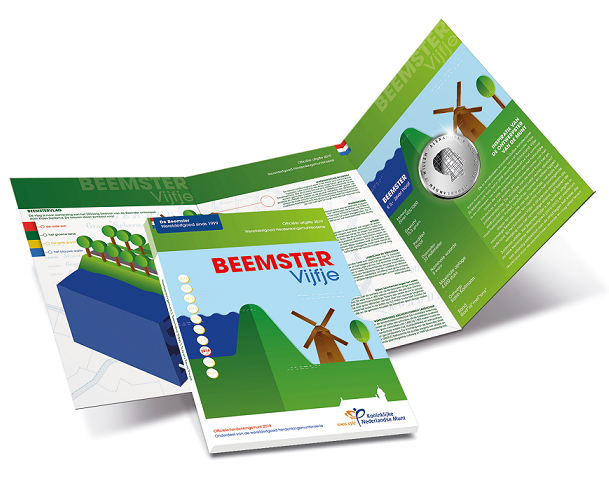 Every year, since 2012, special commemorative coins have been issued by KNM (dutch mint) celebrating Dutch World Heritage. The Kingdom of the Netherlands currently has ten UNESCO world heritage listings, of which the Royal Dutch Mint has immortalized seven of them on a commemorative coin. This year the KNM issues the Beemster 5 Euro coin. This coin tells the story of the historical polder in the North Holland province, where the Dutch drained lands and converted it to fertile agricultural land. This year marks the 20th anniversary of The Beemster, as part of the world heritage.

On May 21, 1607, the States of Holland granted a concession for the reclamation of The Beemster. A 42-kilometer long dike and a ring canal were constructed around the wild Beemsterlake, after which more than 40 windmills began pumping the lake empty.

After a major setback in 1610 – the lake filled up again after a breakthrough of the Zuiderzee dikes – The Beemster finally fell dry in 1612.

Roads and rows of trees were laid, ditches and plot ditches were dug and bell-shaped farms were built. The layout of the new land was planned on the map according to a tight geometric pattern based on large squares.

This example of spatial planning was of unprecedented scale – The Beemster has an area of ​​72 square kilometers – it made the new polder world famous. Here, people live and work below sea level and that is a strange idea for outsiders. The Beemster has therefore served as a model for many polder areas.

Are you standing under water?

The design of the packaging features a section of the landscape of The Beemster.

The image tells us that everyone in The Beemster lives and works below sea level. This unique perception is a symbol for the draining of The Beemsterlake and the importance of our Dutch embankments. If the dams break, there’s a chance your city could be under water. If you order one of the Beemster 5 Euro Coins, you will receive a free sea level map, which shows the Netherlands and the various sea levels per city. 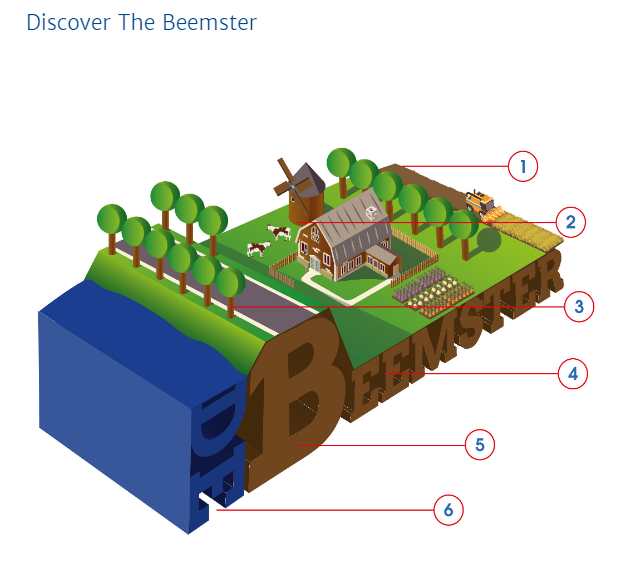 The new agricultural land was sown with rapeseed in the first year after the reclamation. Later a substantial crop of wheat, barley and oats was also brought in. With the mills, however, the land could not be kept sufficiently dry. That’s why agriculture disappeared in favor of grassland and livestock cultivation. The cows on the green meadows of The Beemster polder deliver the milk for the famous Beemster cheese. In addition, the fertile Beemster clay lends itself very well to bulb cultivation. The tulip fields are a feast for the eyes from mid-April to early May.

At the beginning of the seventeenth century, the Beemster was still a big lake. In 1607, the States of Holland granted permission to create land out of that lake. With more than forty mills, the water was ground away. On May 19, 1612 the Beemsterlake was dry.

In The Beemster, a network of roads and ditches is set up according to a tight geometric grid. The long rows of trees along the roads emphasize the straight lines that cut through the polder floor. The plants consist of ash trees, poplars, elms and here and there fruit trees. The dikes are planted with trees, it clearly distinguishes The Beemster from the surrounding old land. From the air, the difference catches the eye immediately.

The Beemster has an area of ​​72 square kilometers and the lowest point is 3.9 meters below sea level. The pattern of straight roads and watercourses is unique. This seventeenth-century innovative and visionary landscape, with its orderly and sleek geometric spatial layout, had a major impact on other land reclamations, both nationally and internationally.

In the spring of 1608, the construction of the 42 km long ringcanal and ringdike around the lake began. This work was divided into 400 sections, which were put out to tender. Everything was done by hand, of course. During a severe storm in January 1610, the dike broke and was destroyed over great distances. They could start again. In the lowest measuring area, the water in the ditches measures 5.0 meters below sea level. The residents can’t keep their feet dry without the dike and pumping stations.

The Beemster marks a crucial moment in landscape architecture. The spatial planning of the new polder was designed strictly on the drawing board based on principles of classical antiquity. A grid of large squares of 1,800 by 1,800 meters forms the core of that design. The result was a landscape in which utility, sustainability and beauty were combined into an unprecedented harmonious whole. The interior of The Beemster nowadays resembles the whole world. UNESCO awarded the polder for its unique and pioneering urban design in 1999 as a world heritage site.

A coin designed by Katrin … Katrin Korfmann grew up in Berlin, but lives and works in Amsterdam since 1995. Her work, spanning various media – ranging from photography to video and installations – reveals a new perspective on social dynamics. Strongly aesthetic, her images present an abstract of human interaction bound by the grid of everyday life. The recent work questions documentary and narrative aspects of photography, as well as its reputation being “witness to the truth”.  Using a bird’s-eye view she stages the event’s ephemerality in the centre and creates a suggestion of distance and closeness at the same time. By simultaneously zooming in and out, Korfmann depicts mysterious realities, which neither the eye, nor the artist’s camera could have grasped.
Katrin studied Photography at the Gerrit Rietveld Academie and continued her research during her residencies at the Rijksakademie, both in Amsterdam. Since the late 1990s her work has been exhibited internationally in galleries, museums, alternative art and public spaces. In addition to a practice as a visual artist, she is a tutor at the Royal Academy of Art in The Hague.

Katrin Korfmann, who lives in Amsterdam, is the designer of the Beemster 5 Euro Coin. She also signed for the Schokland 5 Euro Coin, published in 2018. In the designs of both coins, she emphasizes the contrast between the free, organic form of the natural landscape and the sleek, constructed grid of the polder landscape. 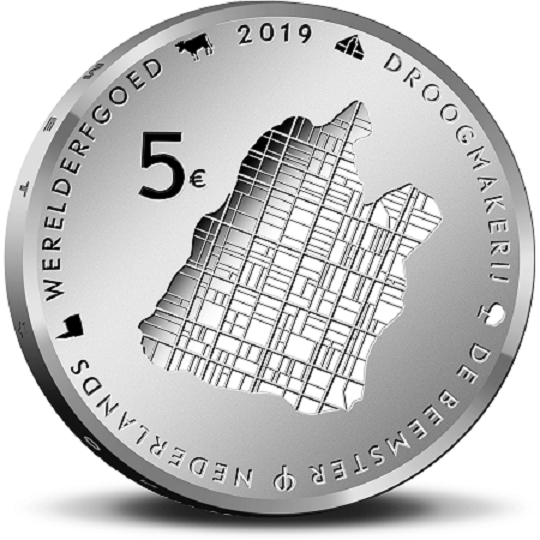 The obverse of the coin shows the profile of the King, looking to the right: abstract but recognizable. Portrait, landscape, icons and letters are deeper in relation to the landscape, just like the former Beemsterlake was in relation to the surrounding old country. On the Schokland 5 Euro Coin this was exactly the other way around as a reference to the former island, which stood out above the Zuiderzee. Korfmann worked with Céline Hurka for typography. 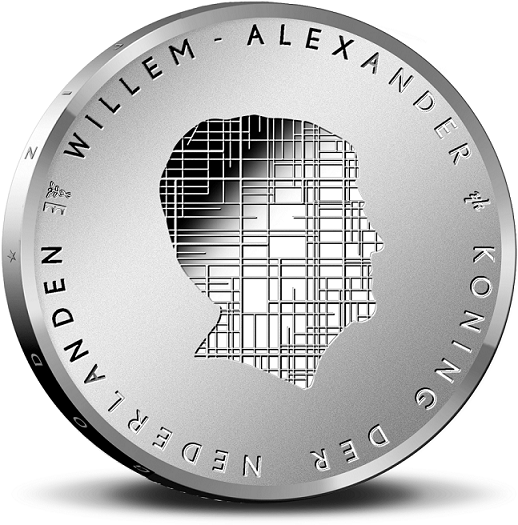 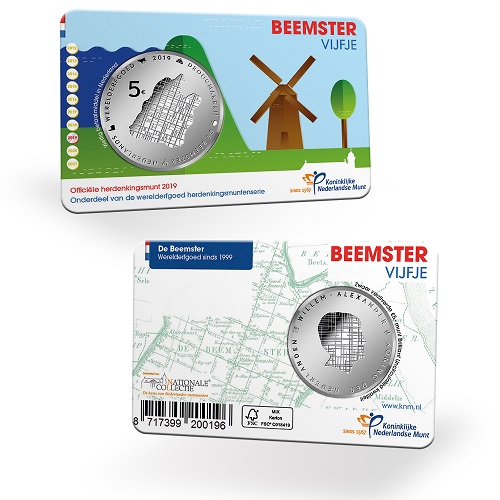 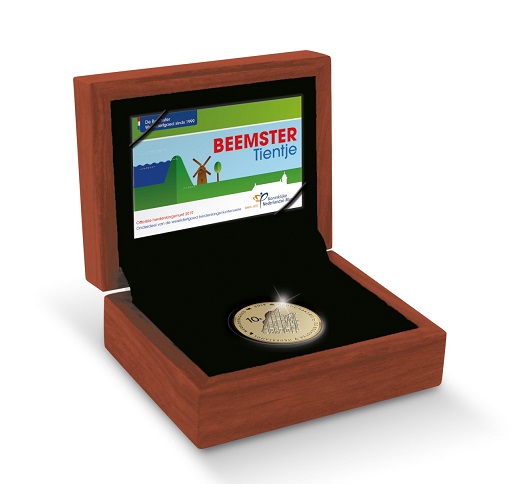 The design of the packaging features a section of the landscape of The Beemster. You can see the water being held down by the dike. Next to the dike, you can see a mill.

Mills were used in the 17th century to help drain the lands. The image tells us that everyone in The Beemster lives and works below sea level. This unique perception is a symbol for the draining of The Beemsterlake and the importance of our Dutch dikes.

If the dikes break, there’s a chance your city could be under water. If you order one of the Beemster 5 Euro Coins, KNM will send you a free sea level map, which shows the Netherlands and the various sea levels per city.