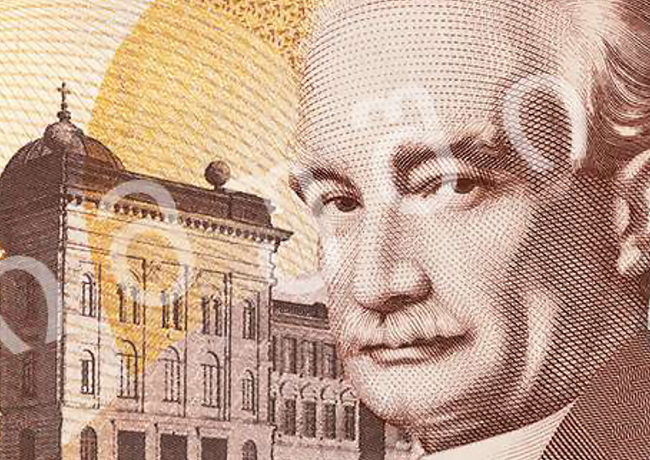 The series of banknotes issued by the georgian NCB will be updated starting from September the1st 2017 with the issue of the first banknote of the updated series, with a facial value of 5 laris. On the obverse, Ivane Javakhishvili (1876-1940) is represented. It is a Georgian university teatcher who was one of the TBILISSI University founders. He was professor of history and its main work is the work entitled “history of the georgian Nation”. The faculty of TBILISSI is represented on the rear.

On the reverse of the banknote appears the famous Niko Pirosmani painting “the fisherman out of red shirt” and a scene of the rural life in Georgia, “the Tresching”. It is about an operation where pets, here a couple of oxen, pressed wheat in order to separate the grains from ears. This method is also used in the south of France (Aveyron).

Niko PIROSMANI is a Georgian nave painter (1862-1918). He is autodidact and its paintings often represent scenes of the daily life.  He was poor and often paid landlords of TBILISSI taverns by painting their signs, against the list and cover. Currently, he is regarded as one of the greatest painters of the Georgian art history.

The signs of security on this banknote of 5 laris are the following:

– A watermark with the portrait of Ivane Javakhishvili

– a hologram with the portrait of Ivane Javakhishvili (latent image)

– Use of iridescent ink

– partial Impression in relief, in order to allow identification of the banknotes by the blinds.