The Bank of Lithuania offers to purchase litas banknotes that have never been put into circulation. The exclusive set of banknotes consists of three denominations of LTL 1,000 and LTL 500 banknotes of the 1991 issue as well as the LTL 100 of the 1994 issue. The first sets of banknotes will be available for sale already during the electronic auction to start on Monday December the 4th. Lituanian NCB has been constantly asked about the possibility of purchasing rare banknotes that have never been put into circulation. That ‘s the reason why, the lituanian NCB offers to purchase a rare portion of the Lithuanian monetary history’s mosaic. Residents will be able to purchase nearly 5,000 sets of banknotes. One-tenth will be sold during the auction to be held on Monday. A week after the auction the sale of the other portion will start at the Bank of Lithuania Cash Offices. 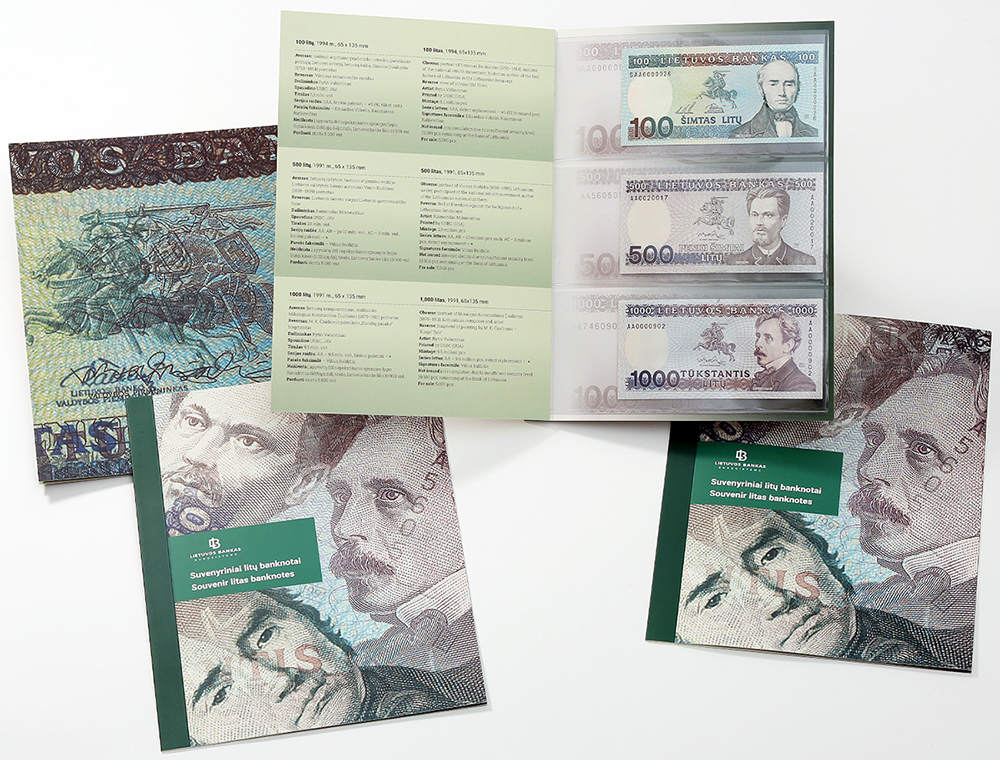 These sets of banknotes are unique in several aspects. First, part of them is overall the very first printed litas banknotes, and this was done a couple of years prior to the introduction of the litas. Second, these banknotes have never been in circulation. Third, the LTL 1,000 is the only denomination in the entire history of Lithuanian money, it features one of the most prominent personalities of our state – the artist and composer Mikalojus Konstantinas Čiurlionis, whose creation achieved huge recognition and has its fans not only in Lithuania but all over the world,’ said Vidmantas Laurinavičius, Head of the Bank of Lithuania Money Museum.

The LTL 1,000 denomination was designed by Rytis Valantinas.

He also designed the LTL 100 banknote, depicting on it Simonas Daukantas, the author of the Lithuanian history in Lithuanian, a fosterer of folklore and educator.

The LTL 500 banknote of the first issue was designed by Raimondas Miknevičius. He perpetuated one of the most eminent figures of the Lithuanian national rebirth movement, a writer and a public figure, Vincas Kudirka. Subsequent issues of banknotes in this denomination were improved by the artist Giedrius Jonaitis.

A week later, residents will be offered 4,484 sets for the average price of the auction.  As of 12 December 8:00 these sets will be available for sale via the Bank of Lithuania’s pre-ordering system https://lb.lt/uzsakymai/, while as of 13 December – at the Bank of Lithuania Cash Offices (Žirmūnų g. 151 in Vilnius or Maironio g. 25 in Kaunas).

Litas banknotes never put in circulation have never been recognised legal tender, thus they cannot officially be exchanged into euro. They are just a souvenir.

16 sets will be allocated for the representation needs of the Bank of Lituania.

Source: Bank of Lituania and NUMISMAG.