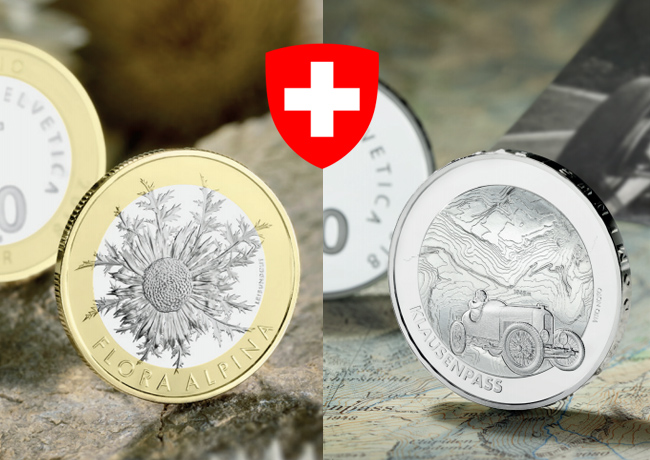 On 25 January 2018, the Federal Mint Swissmint will launch two new commemorative coins for coin enthusiasts and collectors. The bimetallic “Carline thistle” coin is the last in its three-part FLORA ALPINA series. At the same time, the “Klausen Pass” silver coin starts a new series on Swiss Alpine passes.

The Federal Mint Swissmint produces the country’s coins for use in everyday payment transactions. The Federal Mint also regularly issues commemorative coins and coinage of a higher standard for the numismatic market. Coins in bimetal, silver and gold bear an official nominal value and are available in various minting qualities. Swissmint is also the official authority for public authorities seeking authenticity checks.

Protected in some areas, the stemless carline thistle is one of the best-known and most popular Alpine plants. Its prickly beauty, with its large silvery-white corona and disc florets, is a popular photo opportunity. The plant’s poisonous taproot use to be used as a remedy for many illnesses. Nowadays, the beautiful flower is a decorative highlight for any rock garden. The stemless carline thistle (carlina acaulis) is a type of thistle belonging to the Asteraceae family. The hardy, herbaceous plant has virtually no stem. Depending on location, it can grow to 40cm in height. The spiny, pinnatilobate leaves grown in a basal rosette. The underside of the leaves is bald to cobweb-like. The stemless carline thistle is common in Europe but is treated and protected as an endangered species in many countries. It prefers chalky soils and sparse pastures or lightly wooded areas at altitudes between 800 and 2,600m. Its flowering time is between July and October. The stemless carline thistle is also known as the weather thistle. In the past, they were nailed on doors where they acted as natural weather stations. If an area of high pressure was on its way, the flowers would open and when the weather was moist, they would close again. Swissmint ends its three-part FLORA ALPINA series with the “Carline thistle” commemorative 10-franc coin. The graphic artist Jenny Leibundgut, from Bern, again provided the design for the new bimetallic 10-franc coin.

core made of copper-nickel

The 1,948 metre-high Klausen pass is 46km long and links the valley of Schächental in the canton of Uri with the rear of Linthal in the canton of Glarus. As a non-transalpine route, the Klausen pass was of no significance during either Roman times or the Middle Ages. However, no later than the High Middle Ages, a simple cattle track existed which was mostly used for moving cattle to the Alpine pastures on the Urnerboden. A customs post in Bürglen monitored the insignificant local trade. Following Alpine disputes concerning the border between Uri and Glarus on the Urnerboden (it runs through the side of the mountain pass away from Uri), an agreement was reached in the 12th century. Commercial interest in a road over the Klausen pass grew with the opening of the Gotthard railway line in 1882 because the new north-south route was reliant on link-roads. After the project received the armyʹs support, it was quickly built between 1893 and 1899. The big day came on 15 June 1900: the first stagecoach drove over the mountain pass and opened up the magnificent landscape between Linthal and Altdorf to tourism. The Klausen pass gained fame from the legendary Klausenrace, a historic mountain race for cars and motorcycles. The silver Klausen Pass 20-franc coin launches Swissmintʹs three-part commemorative series on Swiss Alpine passes. It was designed by industrial designer Vito Noto from Cadro. 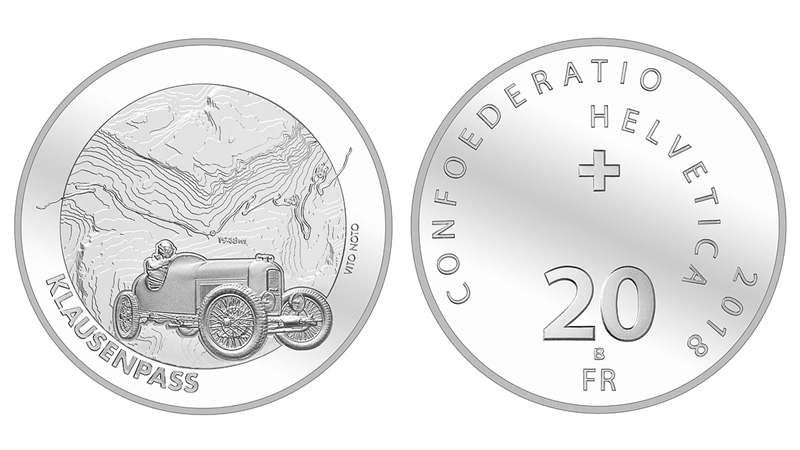