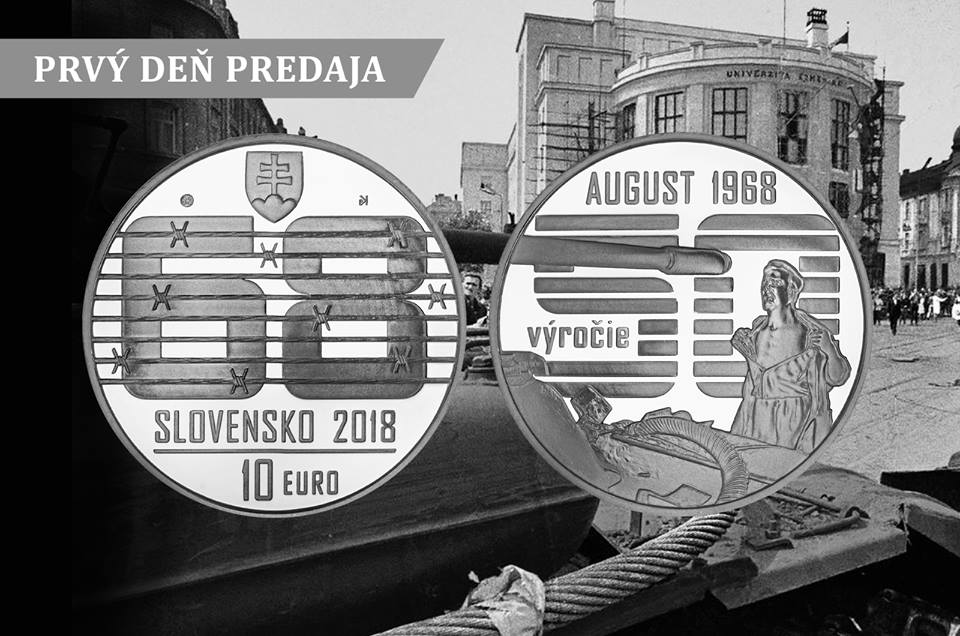 Slovakia Mint, the Mincovna Kremnica, issued on August the 9th 2018 a coin commemorating the Prague Spring and its 50th anniversary. While in Western Europe several countries commemorated the events of May 1968, we must not forget the events that marked the former Eastern Bloc countries in that same year.

Causes of the Prague Spring

It was undoubtedly DUBCEK’s arrival at the head of the Czech Communist Party in January 1968 and his desire to set up a communism “with a human face”, marking a break with Stalinism, that was at the origin of this major event, precursor, with the uprisings of BUDAPEST in 1956, of the  communism  collapse.

DUBCEK wanted to reintroduce political pluralism and press freedom in his country. In economic terms, he wanted an outright abandonment of planned Stalinist doctrine based on the priority given to heavy industry, in favour of more advanced activities producing more added value.

The situation is very contrasted and much less clear-cut than we might think. In the Soviet Union, the “politburo” is divided between the modernists who are rather in agreement with the reforms envisaged by DUBCEK and the old Stalinist guard. Yugoslavia, Hungary and Albania are more on the side of the reformers. The same is true of Nicolaï Ceausescu’s Romania. On the other hand, East Germany pushed for military intervention by Warsaw Pact troops since April 1968 to put an end to what the East German government considered as a dangerous drift of the Czechoslovak government.

A massive military intervention in August 1968

On August the 21th 1968, troops from five Warsaw Pact countries invaded Czechoslovakia. The ground troops were preceded by parachutists, some of them in civilian dress, arriving by regular Russian flights. The intervention of communist troops meets no resistance from the Czechoslovak army and  population. The DUBCEK government had asked the population not to react and to remain calm. 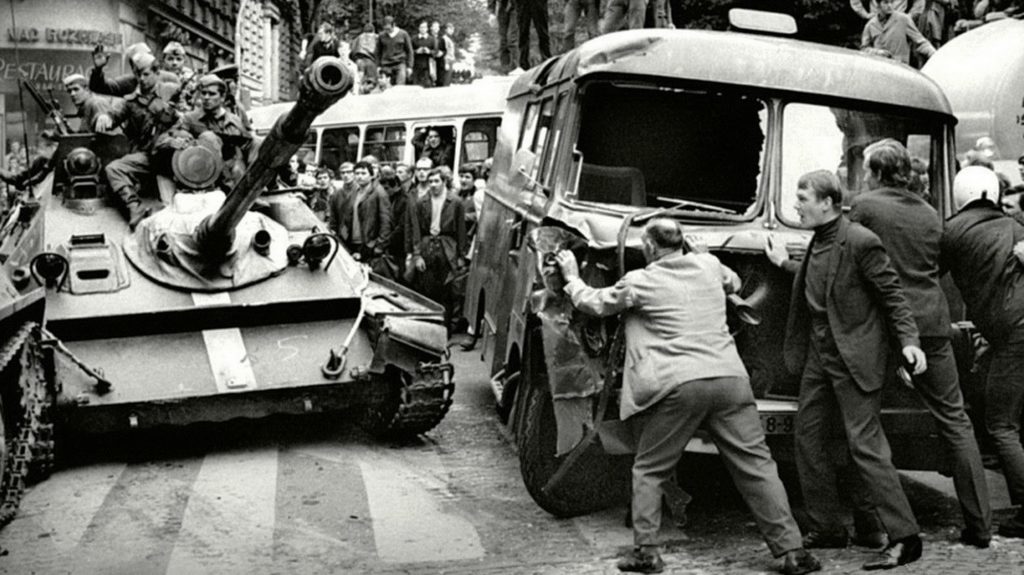 A few isolated incidents have been recorded and Czech historians estimate that the intervention of the Warsaw Pact troops did cost less than 100 deaths.

The Czechoslovak high command was probably aware of Russian intentions  as early as April 1968. But trained in Russian war schools and working in an integrated command dominated by the Russian army, Czech generals remained passive. Perhaps they also feared an unnecessary bloodbath among the Czech population faced to over 6,000 tanks deployed by the Warsaw Pact…

It is undoubtedly the image which will have most marked the minds during the intervention of the communist troops. In protest, a young student, Jan PALACH, sets himself on fire. 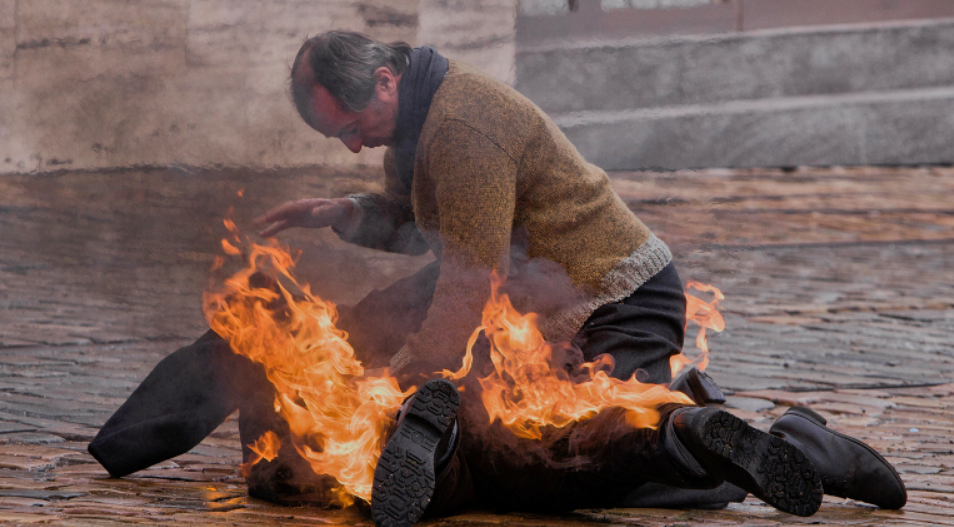 It was at this time that communist leaders had a real fear of a massive uprising in all Eastern bloc countries. The rejection of the communist system by the populations of these countries was indeed proven.

At the international level, several communist countries contested military intervention, such as Romania, Yugoslavia and Albania. This last one even left the Warsaw Pact after these events.

The Italian Communist Party led by BERLINGUER condemned this intervention which marks the beginning of the break with Moscow. The French Communist Party, held by neo-Stalinist leaders, did not condemn anything or anyone…

The consequences of the end of the Prague Spring

About  70,000 people emigrated as a result of the military intervention. This number  is rather low compared to a total population of 15 million people. DUBCEK was gently removed from power in 1969. The army and the administration were purged.

But the most significant effect was the appearance of fundamental disagreements between the communist leaders of WARSAW PACT countries and one of the first breaches in the communist political system of the Eastern bloc.

The issue of MINCOVNA KREMNICA, full of symbols

On the obverse, we see a man spreading his shirt in front of the barrel of a Russian tank, a provocative and symbolic gesture, meaning “Go ahead, shoot the people, we are not armed!”.

The number 50 indicates that 2018 marks the 50th anniversary of the Prague Spring and the military intervention of the Warsaw Pact countries. “August 1968” is the day of this intervention. 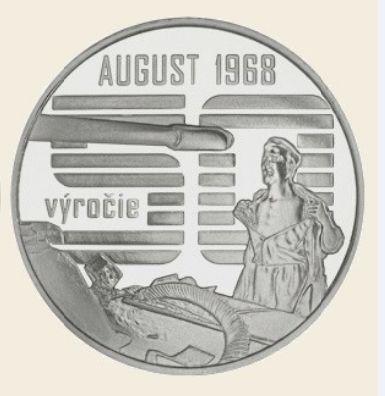 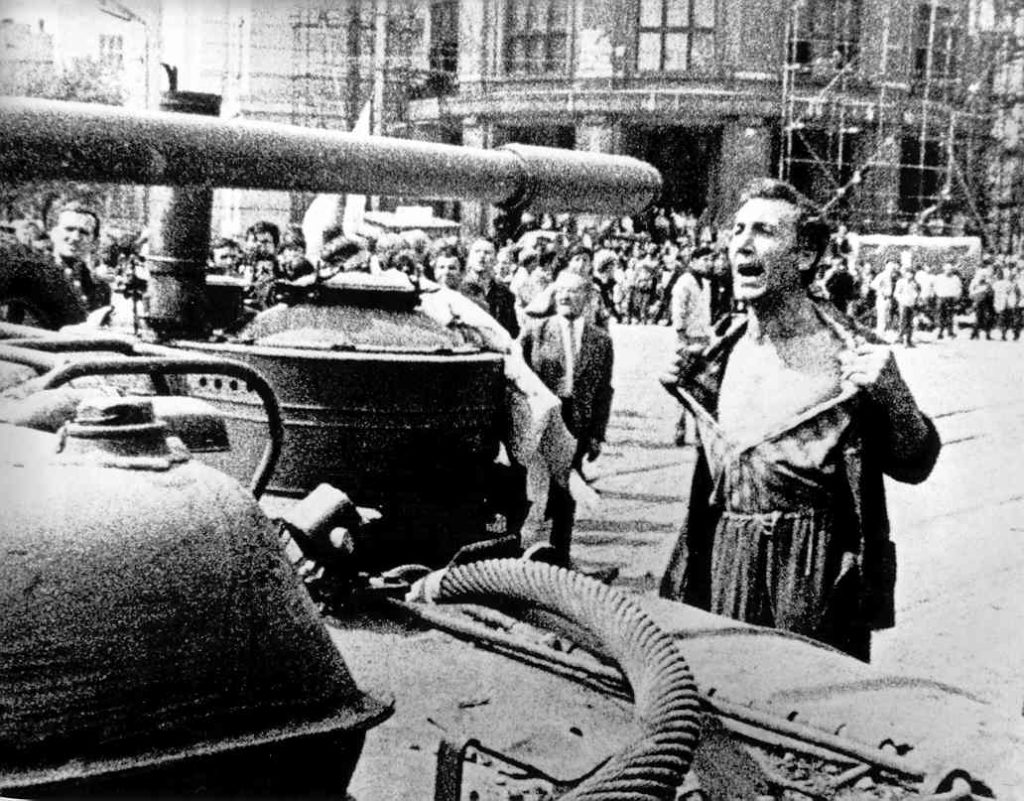 In August 1968, a man baring his chest to Warsaw Pact troops

on Šafárik Square in Bratislava

On the reverse, the number 1968 surmounted by barbed wire symbolizes the end of freedom in Czechoslovakia, with the military intervention of the Eastern Bloc countries.

The mintmaks of the engraver and of the Slovak Mint were engraved in the upper part of the reverse of the coin. 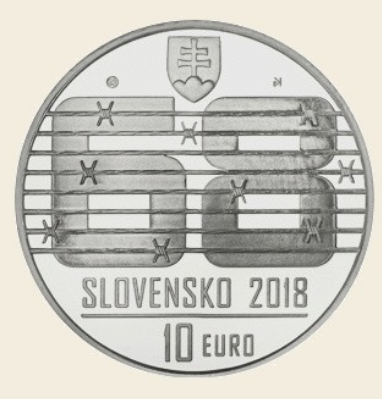