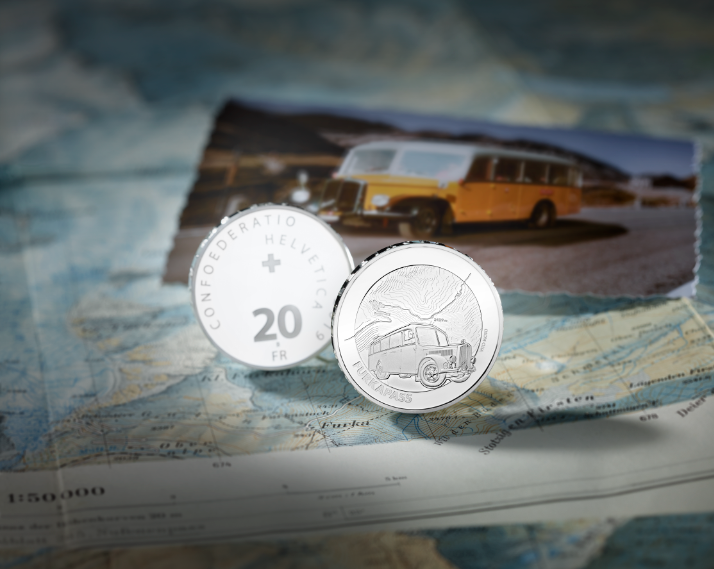 At an altitude of 2,429 meters above sea level, the Furka Pass is one of the highest and most impressive Alpine passes in Switzerland. It connects the hamlet of Gletsch in the canton of Valais with Andermatt in the canton of Uri and, together with the Oberalp Pass, forms a eastwest link within the Alps. The area is one of the snowiest in Switzerland. The European watershed runs along the pass: the Rhone flows southwest towards the Mediterranean, while the (Furka-)Reuss sweeps northeast into the Rhine and the North Sea. Swissmint is honouring the Furka Pass with the second silver coin in the “Swiss Alpine passes” series.

Bronze Age finds in Upper Valais and the Vorderrheintal indicate connections and cultural exchanges between Goms and Raetia. The first landmark event in Furka Pass traffic to be documented was around the 12th century, when hundreds of German-speaking Walser people settled with their families in the Urseren Valley or even further east in Raetia. In the 14th century, the route over the

pass summit at 2429 metres a.s.l. gained in importance for the Walser people because it granted them direct access to the transalpine axis via the Gotthard. The road tolls, which were levied both in the cantons of Uri and Valais until the 19th century, were used to maintain the mule tracks and roads, among other things. Between 1864 and 1866, the almost 40-kilometre-long and at least 4.20 metres wide road from Hospental to Oberwald was built by the cantons of Uri and Valais.

The Confederation paid for two thirds of the costs for military reasons. From 1867 to 1920, tagecoaches operated on the new road, transporting more than 19,000 people over the pass in 1914. In 1921, yellow Postbuses replaced the coaches. In 1907/08, the Federal Council granted licences for a Brig-Furka-Disentis railway link (BFD company); the opening of the line to Gletsch was celebrated in 1914, but the official commissioning only took place in 1915. However, in 1916, further construction work had to be suspended for financial reasons during the First World War; the BFD company went bankrupt in 1923. The Furka-Oberalp-Bahn (FO) company, newly founded in 1925, completed the work and started operations in 1926 as far as Disentis. The high Alpine route was electrified in 1942. The Furka Base Tunnel, opened in 1982, enabled year round operation including car transport.

After the opening of the Furka base tunnel, the Furka mountain line was discontinued and the contact line was removed after closure. Thanks to the private initiative of railway enthusiasts and the founding of an association, the mountain route was reopened in stages and operated with steam locomotives. 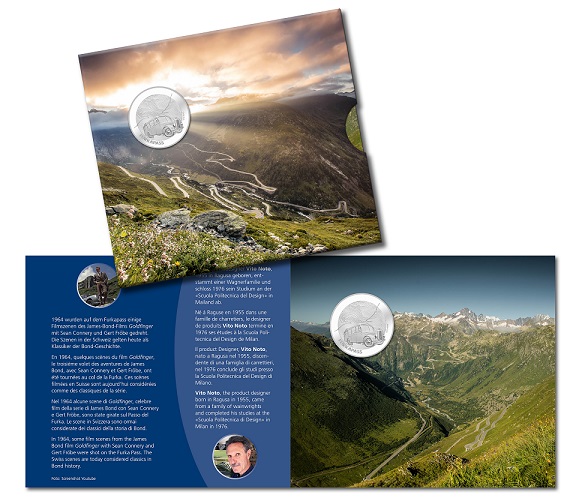 The first inn in Gletsch opened in 1830 and was one of the pioneering businesses in the whole Alpine region. From 1856, the Seiler family of hoteliers and other entrepreneurs expanded the choice available to tourists. In 1882, on the initiative of then 24-year-old Josef Seiler, the small Hotel Belvédère was built on a prominent bend in the new Furka road. The new guesthouse in its most beautiful panoramic setting was the ideal place to meet guests’ desire for accommodation which offered a special panoramic view and also close to the Rhone glacier. Unfortunately, the Hotel-Restaurant Belvédère is currently closed for an undetermined period of time.

Today, more than 250,000 people cross the Furka Pass every year. Whether by bicycle or motorbike,  car or Alpine postal bus, or on board the historic steam train on the cogwheel mountain route.

The Rhone Glacier itself has lost some of its spectacular size due to global warming: As late as 1850,

the ice stream reached far down into the valley floor. Today, the glacier tongue lies at the height of the Belvédère hotel. Nonetheless, the glacier and its species-rich foreland, as well as the unique alpine granite world with the 3586-metre-high Galenstock, are more than ever a magnet for hikers and climbers, and in winter for ski tourers and snowshoers. It is also worth making a detour to the glacier grotto, an ice chamber that is rehammered into the glacier every year.

A nature trail starting in Gletsch brings you closer to the diversity of the glacier foreland with its pioneer plants and the dynamics of a glacier river, the Rhone. The Furka Pass and its winding roads gained additional worldwide fame in 1964, when some scenes from the James Bond film Goldfinger with Sean Connery and Gert Fröbe were shot there. The Swiss scenes are today considered classics in Bond history. 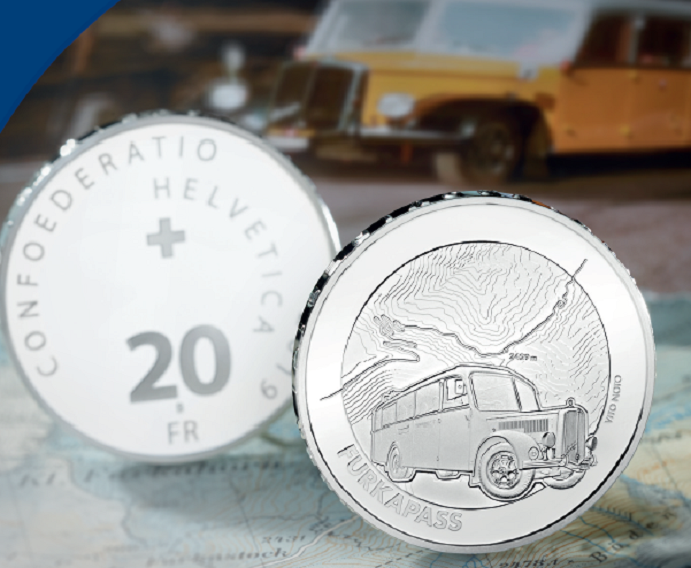 The postal bus depicted on the coin was based on a 1950 Berna/Seitz 1UP142 R1 Alpenwagen I. The Berna brand is still based in Olten, continuing on from the days of Motorwagenfabrik Berna Although it was taken over by Saurer in 1929, the Berna brand was retained.

The 5322cm3 bus with 55 seats is now owned by the Giardino Hotel Group in Ascona and continues to be used for events. 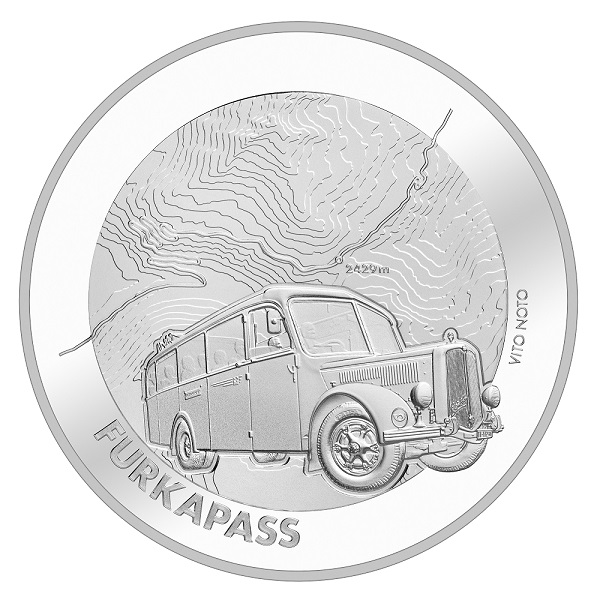 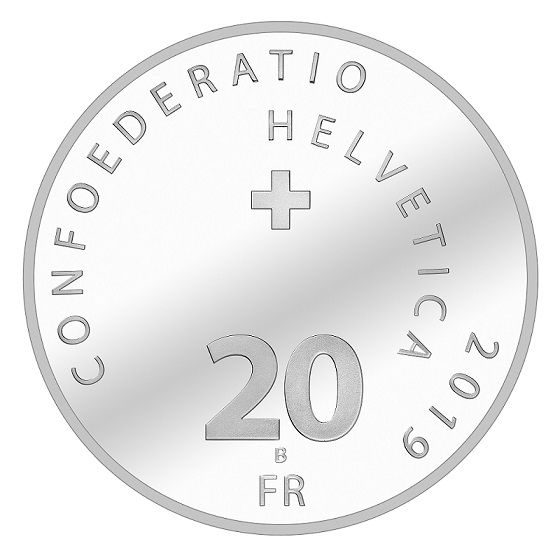 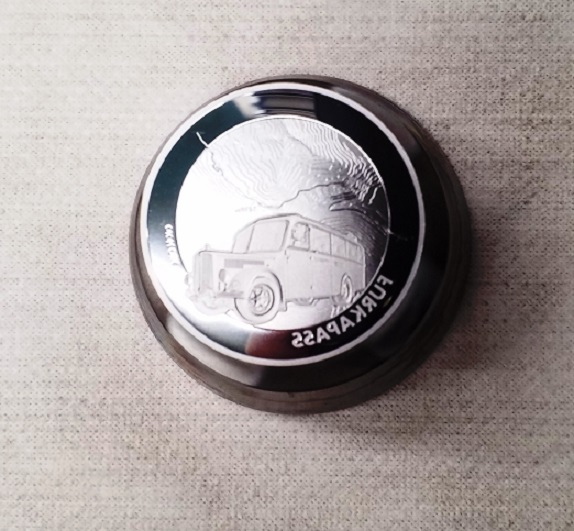 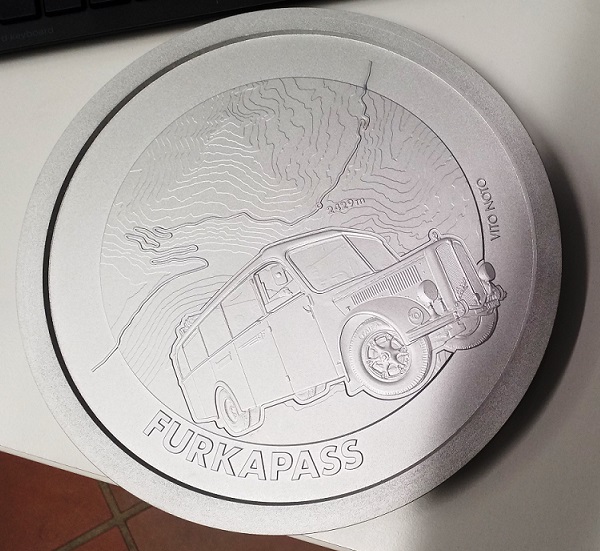 A coin designed by VITO NOTO

and engraved by REMO MASCHERINI

The coin was designed by the artist VITO NOTO.

Vito Noto, the product designer born in Ragusa in 1955, came from a family of wainwrights and completed his studies at the “Scuola Politecnica di Design” in Milan in 1976. His teachers and lecturers included famous Italian and international design names. After his studies, he gained extensive experience with designers in Zurich, Hamburg and Paris. Swiss resident Vito Noto’s wide-ranging project work means he is always in search of diversity and the meaning of the values of the things which surround us. He designs home and office objects for internationally renowned brands. He also designs machinery and equipment for a wide range of industrial purposes. Vito Noto has received many international awards, including the Compasso d’Oro and the 1995 Design Prize Switzerland.

The 20 francs FURKA collar was engraved by REMO MASCHERINI of SWISS MINT. 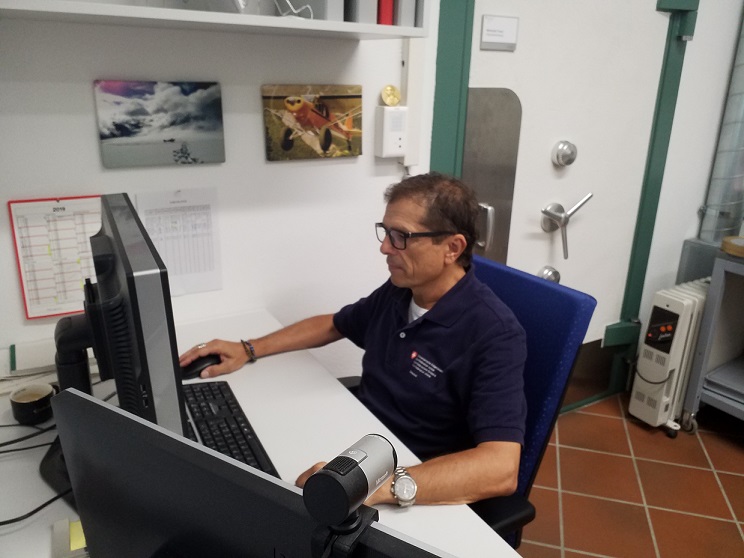 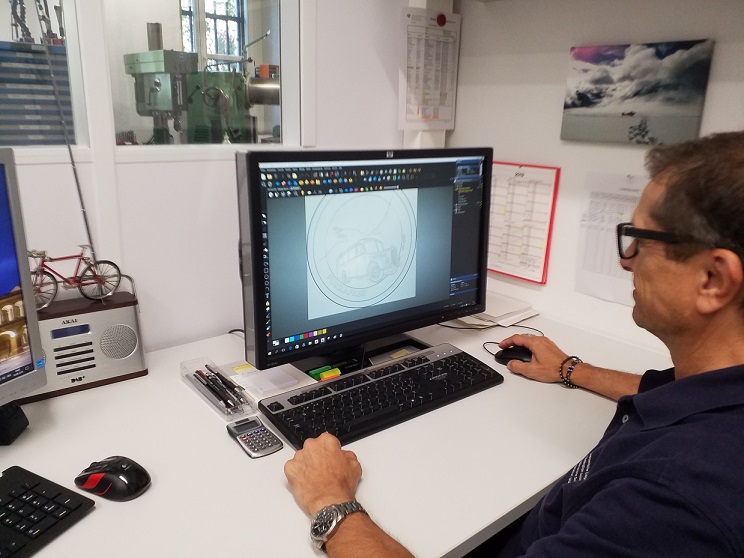 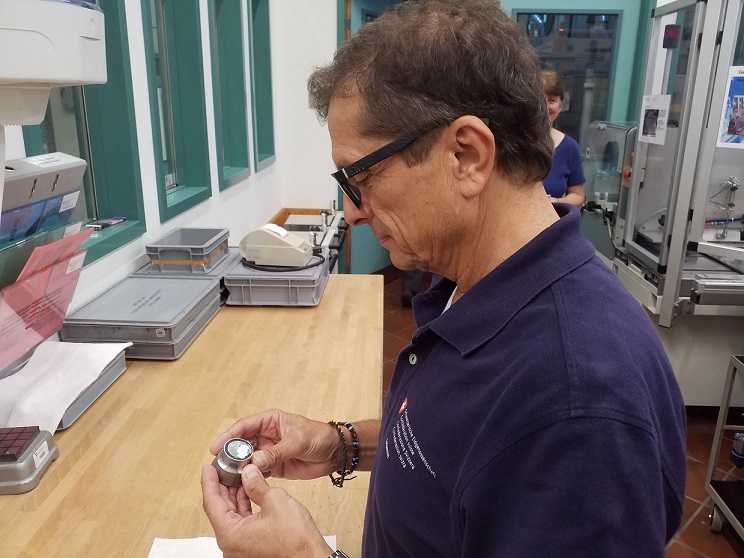