A collectors’ 19zł banknote has been issued by the National Bank of Poland to commemorate the 100th anniversary of the Polish Security Printing Works (PWPW).

The construction of a new building at Sanguszki Street in Warsaw began in the same year. It continues to serve as the head – quarters of PWPW to this day. The company’s history is inextricably linked to the history of the newly-reborn Polish state and the fate of its citizens. The years of the Second World War turned out to be a particularly challenging period.

The PWPW building was seized by the Nazi occupiers, but still served as the seat of the underground resistance group known as PWB/17/S. It consisted of PWPW’s workers, who risked their lives to continue the production of banknotes and documents for the needs of the Home Army.

During the Warsaw Uprising, the building of the Polish Security Printing Works became one of the most important insurrectionary redoubts used by the Polish freedom fighters. After the war, production was resumed in the rebuilt headquarters and the subsequent generations of employees worked to ensure the company’s continuous development and modernization.

For 100 years PWPW has been guaranteeing the security of the Polish state and the identity of its citizens. PWPW produces perfectly secured banknotes, identification documents, postage stamps and dozens of other types of security prints. At present PWPW is one of the world’s most advanced companies involved in the production of security paper, banknotes and secured prints. While remaining in the service of the Polish state, the company successfully implements domestic orders and dynamically expands its export production.

The history of PWPW is strongly associated with the figure of its patron Ignacy Jan Paderewski, an exceptional politician, pianist and philanthropist, and one of the founding fathers of independent Poland. He was an ardent patriot, engaged in political and social activities both at home and abroad. This statesman’s character and his great love for his country are best reflected by his own words: “Poland shall not perish! It shall not perish, but it will live forever in greatness and glory. For you, for us, and for all of humanity”.

The presented banknote is yet another collector item from the “Independence” series. The date printed on the banknote, 25 January 2019, falls on the 100th anniversary of the establishment of PWPW.

Its face value of 19 zł is also a reference to the year in which PWPW was originally created. The banknote was produced on a paper substrate. The watermark depicts the image of the eagle from the first Polish banknote produced at PWPW after Poland regained independence. A new feature found here is a holographic stripe located over a see through window in substrate. 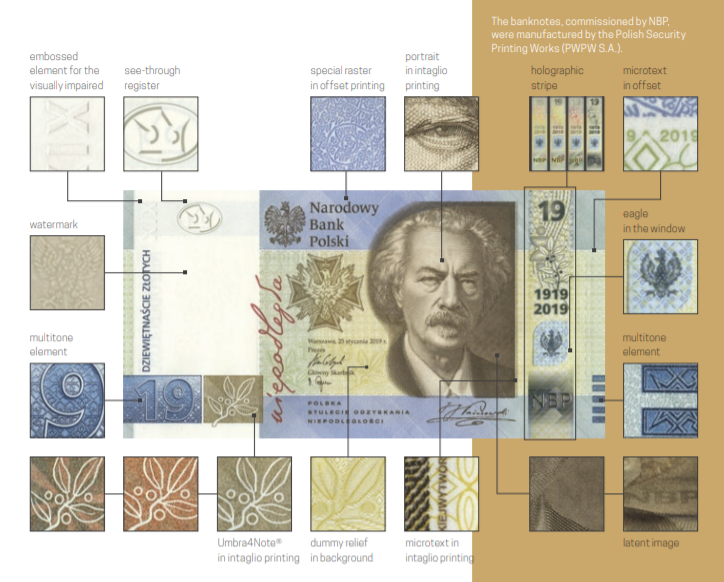 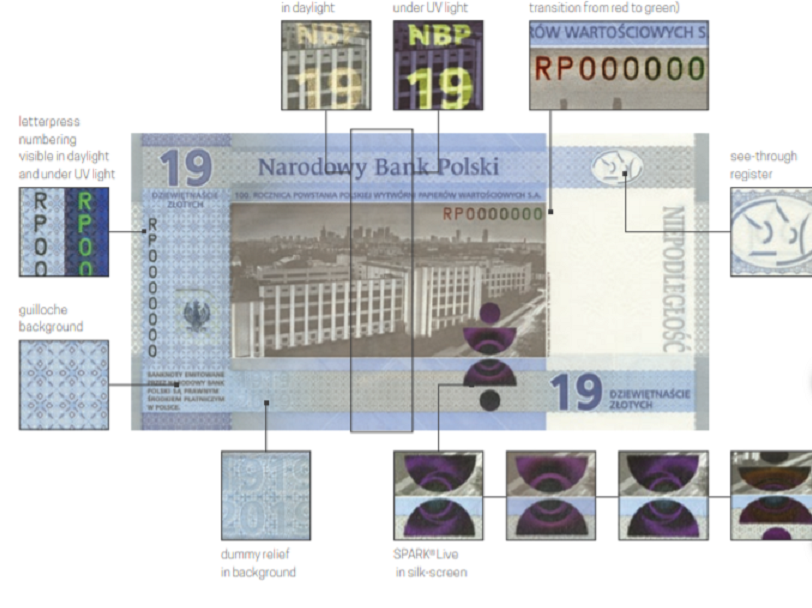 The front side of the banknote carries a portrait of Ignacy Jan Paderewski, and a stylized image of the Order of the White Eagle is presented next to the inscription “niepodległa” (“independent”). This inscription, reproduced from Józef Piłsudski’s manuscript, serves as the logo of the official celebrations of the 100th anniversary of Po – land regaining independence. 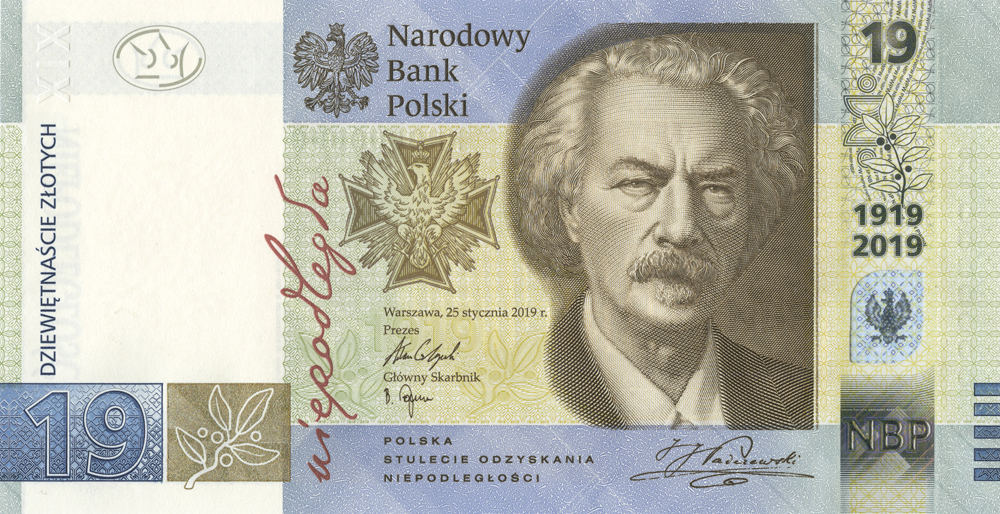 A special kind of latent image developed by PWPW, known as Umbra4Note, is incorporated into the image of a laurel branch symbolizing brotherhood and victory.

The back side of the banknote carries the image of the PWPW building, presented against the backdrop of a panoramic view of contemporary Warsaw. 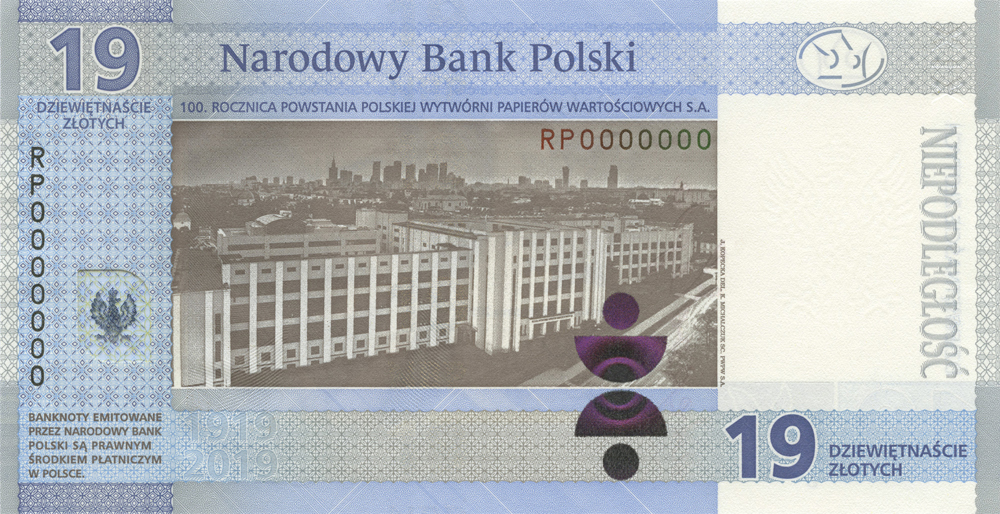 Next to the image, there is the PWPW logo printed in the SPARK Live technology and an iridescent stripe, also visible under UV light, in the form of the number “19” and the abbreviation “NBP”, repeated alternately.

The issue of the collector banknote commemorating the 100th anniversary of the establishment of the Polish Security Printing Works emphasizes the special role that PWPW plays in relation to the Polish state and its citizens.

Banknote designer Justyna Kopecka said: “We start the design process with collecting materials. We always read a lot. We need to learn as much as possible about the banknote, we collect photographs, search the Internet, go to libraries, look for inspiration from the environment.

This is the same creative process as any other design. The design of banknotes is, however, specific because it takes into account the complex technology of making banknotes.” 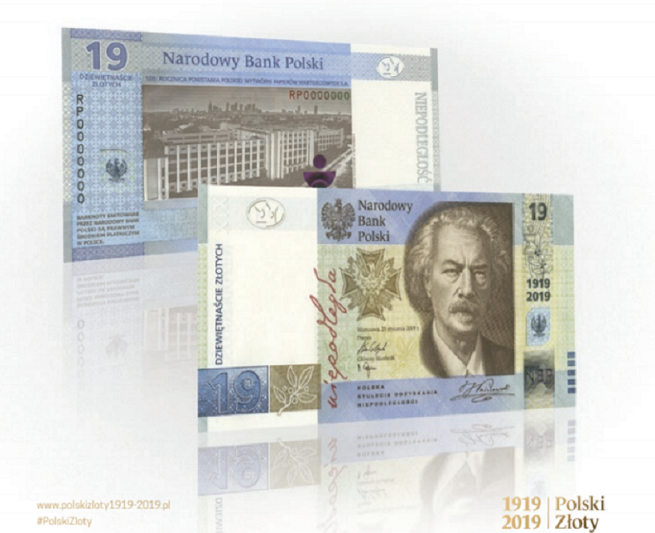 The banknotes, commissioned by NBP, were manufactured by the Polish Security Printing Works (PWPW S.A.).

All coins and banknotes issued by NBP are legal tender in Poland.