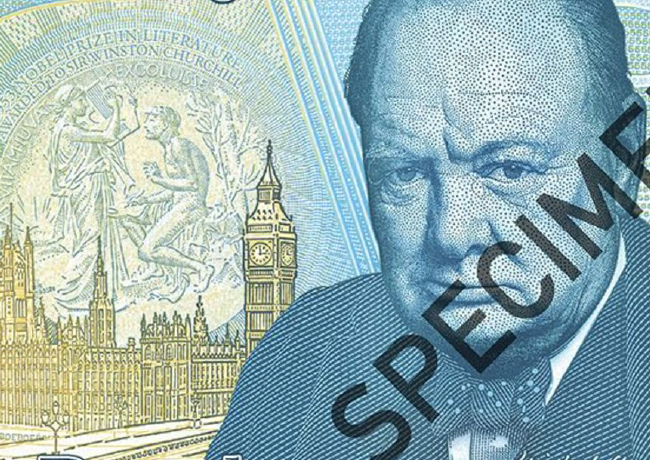 The British press has stessed on top prices on Ebay for several weeks ,obtained by the salesmen of £5 banknotes, on which figures the portrait of Winston CHURCHILL , on the reverse. The infatuation especially goes on the currencies with a “AA01” prefix number.

The classification of the new banknote:

This banknote is rather simple to decode, contrary to the euro-banknotes of the Europa series, for example. The banknote carries only one code which starts with two letters, followed by two digits, that is to say a “LLNN” (L for letter and N for Number) combination. This one represents the number of pulling, the first pulling being “AA01”. 440 millions of banknotes were printed, according to the Bank of England (BoE). That represents 440 pullings, of a million banknotes each, given that only six digits follow the pulling number in the full code. A pulling goes from 1 to 999,999.

Except some very particular combinations, the pulling banknotes “AA01″ are the most expected.

Beyond, the prices are not significant and should very quickly approach the facial value (NB: 5,85€) and in any case they should not exceed 10 to 20€.

Why such a passion? Quite simply because this banknote is the first English polymeric currency. It is printed on “plastic” and either on paper. Although one would have rather to say, in the past, fabrics and not paper. This last indeed consisted of cotton fibers. It is thus a historical emission which marks a technological rupture with the English currency printing tradition.

2016 new fiverwhat worth winston churchill banknote?worth of a 2016 5 pounds banknote
No Comments
Share: