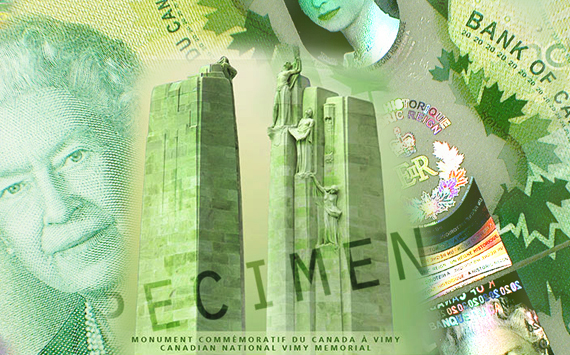 2017, April the 4th, marks the 100 years of the battle of VIMY, which took place during the first World War. A Canadian circulation polymer banknote of 20 dollars face value, put in circulation in 2015, is illustrated by a drawing representing the canadian memorial of VIMY which commemorates the first military commitment in which the canadian army was implicated in 1917 on the western european battlefront, in France.

Four divisions were committed under the orders of general BYNG with like objective the catch of the peak of VIMY and “cote 145″, its summit. The French and English troops had failed on this objective during several months and that had cost more than 100,000 deaths. After a preparation of serious artillery with shells which explode when they strike the ground, the network of barbed wires of the german fortress had been seriously damaged. The Canadian troops counted specialists trained with the use of  German artillery guns. That did afford to the canadian troops to gain much time, being able to turn over against the German troops their own equipments as soon as they were taken. The canadian strategy also sliced with the doctrines of combat of the other committed countries.

Rather than to use all their resources against the German points of resistance and to stop the total projection of the troops while waiting for the reduction of these pockets of resistance, the canadian army systematically proceeded by  “wrapping” movements around these points of resistance, without to stop its forward move. Finally, the canadian army took the “cote 145″ at the cost of 3,500 deaths and more than 7,000 wounded soldiers. The peak of VIMY and the grounds neighbouring were yielded to Canada which set up a memorial in order to commemorate these hard combats.

Taking into account the historical importance of these engagements in the history of the First World War and in the modern history of Canada, it is completely legitimate that a banknote is dedicated to this historical event. An exhibition is organized with the Canadian War Museum, from 2017 April the 6th to November the 12th, which marks the hundredth birthday of this battle.