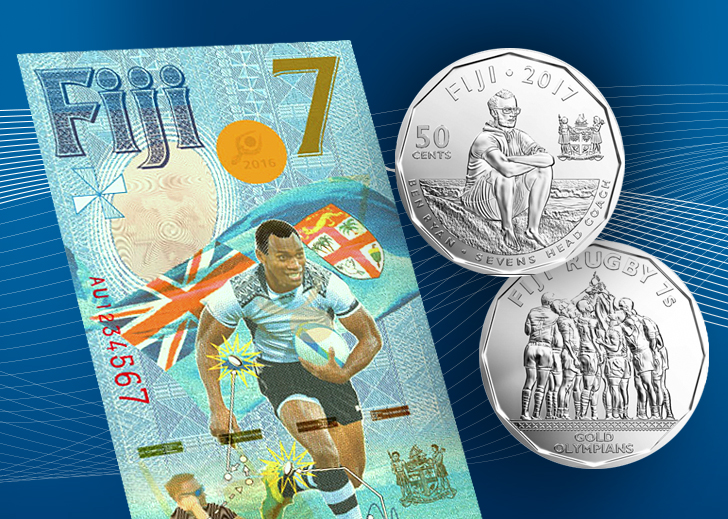 The gold medal win was one of the stories of the Olympic Games, as Fiji became the first men’s side to win gold as the sport returned to the Olympic program. Since returning home, the players and coaches have become national heroes.

In recent months, the team has been widely lauded at home. Last weekend, their immortality was assured when the Fijian Government released a $7 note. It is the first known note of that denomination in existence.

Two million of the $7 face value (about €3.10) banknotes were released by banks last weekend. Moreover, one million 50 cent coins commemorating this event have been minted and will be put into circulation.

Ben Ryan, coach of the Fidji island rugby team, who has been given pride of place on the 50 cent coin.

Barry Whiteside, Governor of the Reserve Bank of Fiji, said plans were made to release the note, as soon as Fiji won gold last August.

While adding that the process of designing and adding new notes or coins takes between a year and 18 months, Whiteside felt the need to get the money into circulation as quick as possible.

As the only $7 bills in the World, Fiji’s new bank notes are sure to become collector’s items for sports fans and currency fans alike.

Governor Whiteside said that only a limited number of this commemorative banknote and coin have been produced. They will be issued through commercial bank branches from 21 April 2017, while special numismatic collector sets will be available through the Reserve Bank.

The primary colour of the $7 commemorative banknote is blue, synonymous with the Fiji Flag. The front of the note is vertically oriented to complement the front designs. Fiji Rugby 7s Olympic Captain Mr Osea Kolinisau OF is featured as the main image with the Fiji flag in the background, a reminder not only of our national identity but also that Mr Kolinisau was Team Fiji’s flag bearer at the Rio 2016 Olympics. Fiji Rugby 7s Olympic Coach Mr Ben Ryan CF sitting on the Sigatoka Sand Dunes in pensive thought mode is featured as a sub-image. The Fijian Coat of Arms is also depicted together with the signature of the Governor of the Reserve Bank of Fiji. The word ‘Fiji” appears on the top left hand corner of the note while the denomination numeral is present on the top right hand corner in gold font and in blue font in the bottom left hand corner. The denomination in words also appears on the bottom right hand corner.

A special Optically Variable Ink (OVI) is also used on the front of the note in the form of a round golden patch, depicting the gold medal but with the RBF logo, the tagaga, inserted together with the year 2016. There is also a see-through feature in the form in designs that complement the backdrop as well as designs from the reverse of the note. A watermark feature is also present depicting Fiji Rugby 7s Olympian Mr Savenaca Rawaca OF, a leading ball carrier, in motion with a rugby ball. The watermark is oval-shaped with white rings around it depicting a rugby ball in motion. The serial numbers of the banknote are vertically and horizontally oriented in red and blue fonts respectively with the prefix AU, the chemical symbol for Gold. A STARsheen® 2mm security thread has also been incorporated with the words ‘FIJI 7s GOLD OLYMPIANS’. When viewed at an angle, the numeral ‘7’ and a rugby goal post with a rugby ball can be seen. These designs, together with a gold medal around Captain’s neck, fluoresce to green when viewed under an ultra violet light. The reverse of the banknote features the Fiji Rugby 7s Gold Olympians with the Prime Minister of Fiji, Hon. Josaia Voreqe Bainimarama and team officials. The Prime Minister is also recognised as the President of the Fiji Rugby Union. The word ‘Fiji” appears on the top left hand corner of the note while the denomination in words appears on the top right hand corner with the RBF logo. The denomination numeral is present on the bottom right hand corner of the note in gold font. The watermark and the see-through feature are also visible on the back of the note with Fijian masi designs across the note complementing the design elements. When placed under an ultra violet light, the gold medals around the players necks and the RBF logo fluoresces to green.

The front of the 50 cents coin features the word ‘FIJI’ and the issuing year ‘2017’ with the denomination ‘50 cents’ and a representation of the Fijian Coat of Arms. The main image is that of Fiji Rugby 7s Olympic Coach, Mr Ben Ryan CF, sitting on the Sigatoka Sand Dunes with arms folded with the ocean as the backdrop and the words ‘BEN RYAN SEVENS HEAD COACH’ inscribed around the coin in a semi-circle.

The reverse of the coin features the words ‘FIJI RUGBY 7s’. The main image is that of Fiji rugby 7s team in their pre-game iconic bonding mode with the words ‘GOLD OLYMPIANS’ inscribed on the bottom of the coin. The coin is round shaped with milled edges with do-decagon inside edges.