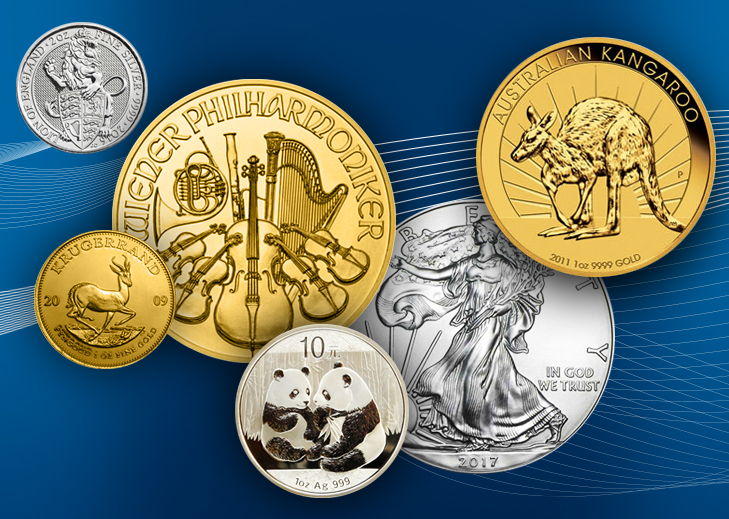 Bullion coins, according to its common definition, are struck to investors who wish to hoard strong value in a very small volume of precious metal. The measurement of reference in term of fine metal is in general the Troyes ounce (i.e. 31,8g in our system of weights and measures).

The Troyes ounce finds its origins in France. This measuring unit of precious metals, born in the town of Troyes, was of use in the Middle Ages during fairs or larger markets. The eligible coins as “ bullion” coins or coins for investors may vary from a country to another.

We are however able to establish several common characteristics concerning the minting year, the fine metal title and the kind of coin.

The coins considered as bullions coins are in theory relatively recent. They must be struck after 1900 under the USA regulation or after 1800 under the french regulation, for example.

In many countries, the law considers indeed that older coins in precious metal may have a numismatic value, a collection value, more important than the investment value (metal value).

The title must be the finest possible. Expressed in thousandth, it must approach 999/1000 as much as possible. In many countries, the bullion coins or investment gold have a title which cannot be lower than 900/1000. The French regulation on investment gold fixes, for example, the threshold with 800/1000.

Many national Mints in the world strike each year series of bullion coins. For example, it is the case of Canada, Australia or New Zealand. The gold producer countries are the first who have bet on the  bullions coins sector.

But other gold non producer countries Mints did follow the way. In Europe, it is the case in particular of the Austrian Mint which broke records of sales of gold and silver bullion coins with series “Vienna Philarmonic”.

The last financial report, published by the Austrian mint for the 2015 fiscal year, indicates that the mint sold gold and silver bullion coins for an amount of over 900 million euros!

In 2016, the Royal Mint also indicated to have carried out sales record of investment coins.

The gold world demand is 5 to 9 times stronger than before 2008, beginning year of the financial crisis. 2016 year was one of the 5 best years in term of financial results for the Mints striking bullions.

The Mints sell these coins at a higher price than the value of precious metal contained in coins. This variation is called “premium”. It is justified by manufacturing, marketing and distribution costs added to the cost of the gold material used for coins.

The main international bullion coins are:

– American Eagles of the United States

In many countries, bullions may be coins for circulation or tokens. For example, the Austrian coins  Vienna Philarmonic are in fact silver and gold tokens. Admittedly they have an exchange-value in euro but which is much lower than the value of precious metal.

Moreover, these coins are not regarded by the Austrian regulation as circulating coins.

On the opposite, the gold 20 francs coins struck from 1808 to 1914 are considered as bullion coins and effectively circulated in France.

A long time the “bullion coins” were regarded as a gadget. However, for several years this market has been in full growth in a context of economic and world politics crisis. To sum it up, two circumstances which worry private investors and push them to be interested in the bullion coins market. This fact may seem paradoxical insofar as the economic context is deflationary. It seems well that the main motivation of private investors is a persistent distrust to the banking system, in general. That encourages them to hoard money in form of bullion coins.