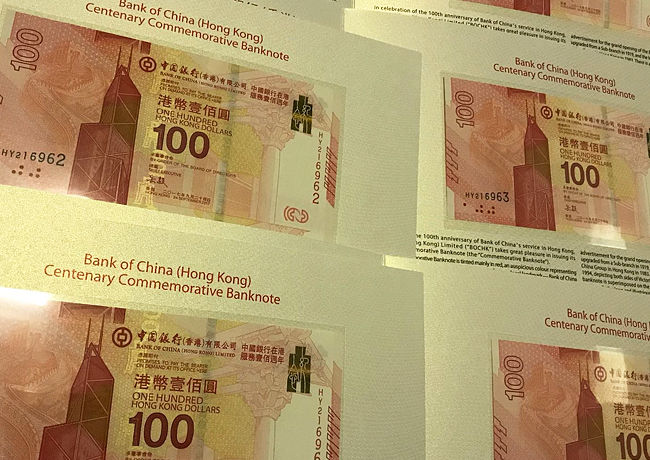 The Bank Of China (BOC) – HONG KONK Branch, is one of the four state banks of continental China. It was at time China central bank, but nowadays, it is the people’s Bank of China that fills this function, since 1949. Shareholding was opened to private investors since 2006. 26% of shares are marketed on stock exchange. It has a powerful subsidiary in HONG KONG, the BOC- HONG KONG. This one is held with less than 30%  of stocks by Bank of China – BEIJING. The rest of the stocks are quoted on the stock exchange of HONG KONK. The bank of China Limited (“BOC”) established its presence in Hong Kong on September 24th, 1917. After one century of development, it sets up a network of retail bank agencies. It wishes to develop on the international level, in this part of the South East Asia. This subsidiary of BOC has since 1994 the right to issue banknotes having legal tender on the territory of the HONG KONG special administrative region. To celebrate the 100th birthday of the BOC – HONG KONG, this one issues a commemorative banknote to celebrate centenary of its creation. 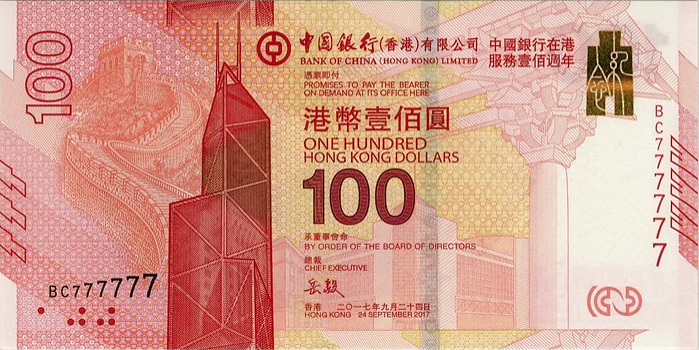 OBVERSE of the Banknote:

The front side of the Banknote features a famous local landmark — Bank of China Tower — superimposed by the image of the Bank of China Building, with the old Bank of China Hong Kong Branch and Bank of China Head Office in Beijing on the side. These buildings symbolise the glorious history of BOC’s centenary of service to Hong Kong. Also shown are the spectacular Great Wall of China and an ancient building pillar, which represent BOC’s strength. These images signify the contributions made by the Bank to maintain Hong Kong’s financial stability and promote its economic growth and prosperity. In addition, there is an antique gold coin embedded with the word “commemorate” written in Chinese Zhuan calligraphy (Seal Style), with the phrase “the BOC’s centenary of service to Hong Kong” adjacent to it.

REVERSE of the Banknote:

It features an image of a newspaper advertisement for the grand opening of the Bank of China Hong Kong Branch, which was upgraded from a sub-branch in 1919, and the logos of 12 of the member banks of the Bank of China Group in Hong Kong in 1983. There is also the first HKD banknote issued by BOC in 1994, depicting both sides of Victoria Harbour viewed from the Peak. The image of this first banknote is superimposed on the centre of the Commemorative Banknote.

Source: Bank of China and NUMISMAG©.