26 April 2018 marks the centenary of Fanny Blankers-Koen’s birth in Lage Vuursche. The Fanny Blankers-Koen five-euro coin is created by the Royal Dutch Mint to commemorate the woman who was named the best female athlete of the 20th century by the International Association of Athletics Federations (IAAF) in 1999.
The flying housewife
Not long after the end of the Second World War, Fanny Blankers-Koen put the Netherlands on the world map when she won four gold medals at the 1948 Olympic Games in London. She triumphed at the 100 m, 200 m, 80 m hurdles and 4 x 100 m relay. By way of thanks, she was presented with a bicycle by the local authorities, ‘because she had done more than enough running’. As Blankers-Koen was already 30 years old and a mother of two during the 1948 Olympics, she earned the nickname ‘the flying housewife’. In addition to four Olympic medals, Blankers-Koen achieved 58 national titles, 5 European titles and 21 world records during her active career from 1935 to 1955. She competed in the sprint, hurdles, high jump, long jump, shot-put and pentathlon. Following her active career, Blankers-Koen served as Olympic team leader in 1960, 1964 and 1968. She died in Hoofddorp on 25 January 2004 at the age of 85.
Inspiration for the designers

The designers of this official commemorative coin are visual artists Suzan Drummen and Monique Wijbrands. They produced a twisting, dynamic line silhouette of King Willem-Alexander on the obverse. The dynamic style is a reference to the speed and strength of athlete Fanny Blankers-Koen, who is bounding across the coin’s reverse. This repetition lends the coin the quality of a celebratory flower or medal. The thin lines convey some of Blankers-Koen’s signature features: her long stride, loose arms and muscular body. This use of lines unifies the obverse and reverse of the coin. The time factor – a crucial aspect of her performance – is expressed by a circle of lines similar to the seconds on a clock face. The Fanny Blankers-Koen five-euro coin, the second commemorative coin issued in the series of Dutch sporting icons (following the Johan Cruijff five-euro coin), is a tangible reminder and a fitting tribute to our athletics legend of the 20th century.

The Royal Dutch Mint will strike the commemorative coin in special minting qualities. The coin will be available in various versions, including in Silver Proof in luxury packaging with background information, and in BU quality in a numbered coin card. A limited number of exclusive 10-Euro commemorative coins in Gold Proof will also be minted and a Silver Fanny Blankers-Koen Colour Set with the very first Dutch coin in Rose Gold will be issued. The Fanny Blankers-Koen 5 Euro Coin is also available in UNC quality. 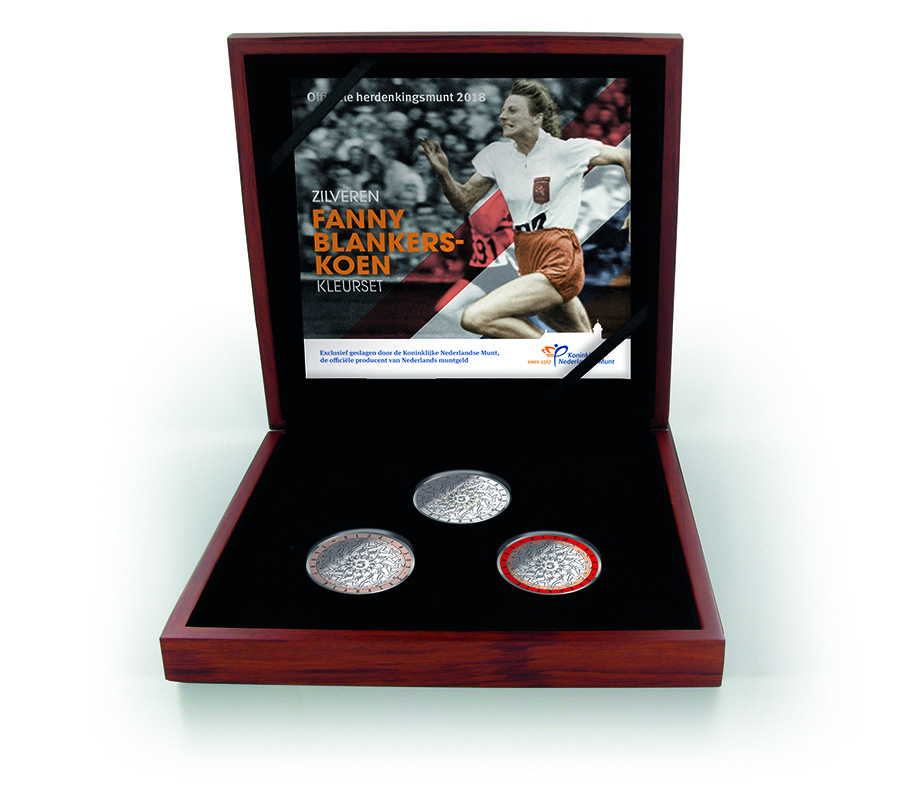 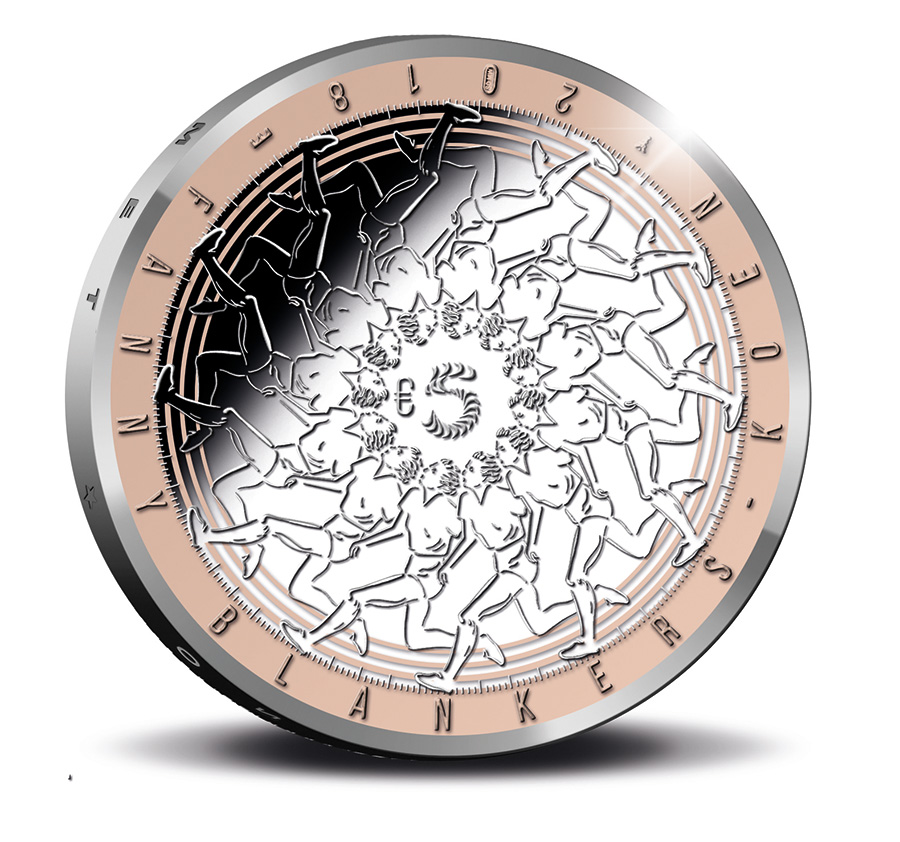 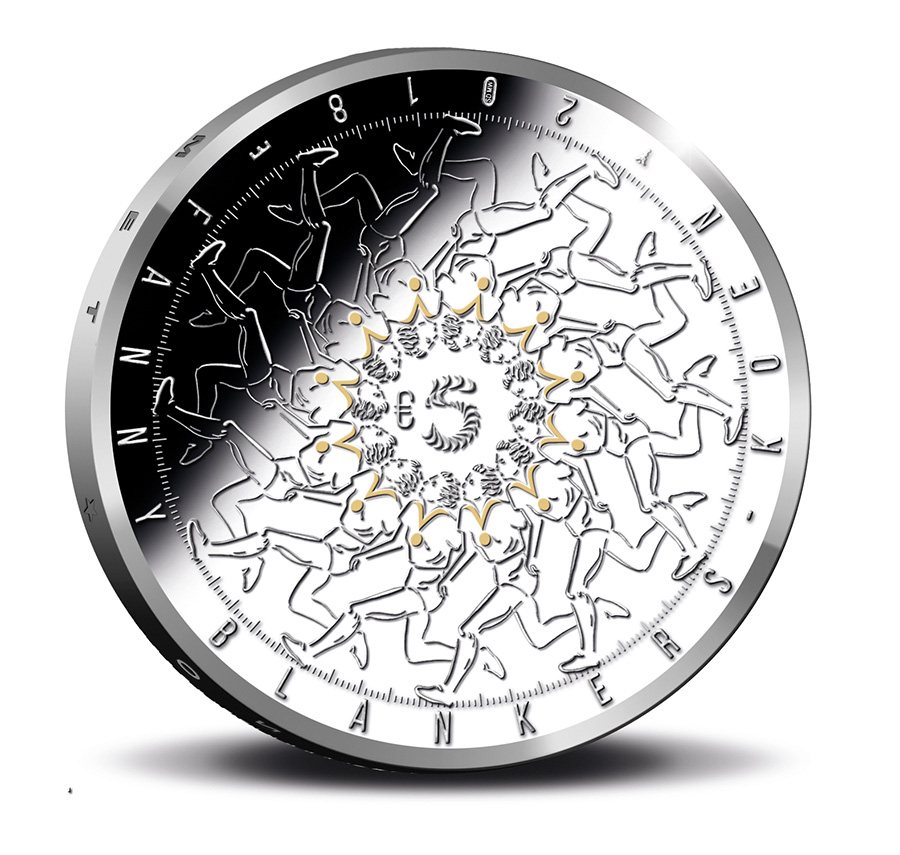 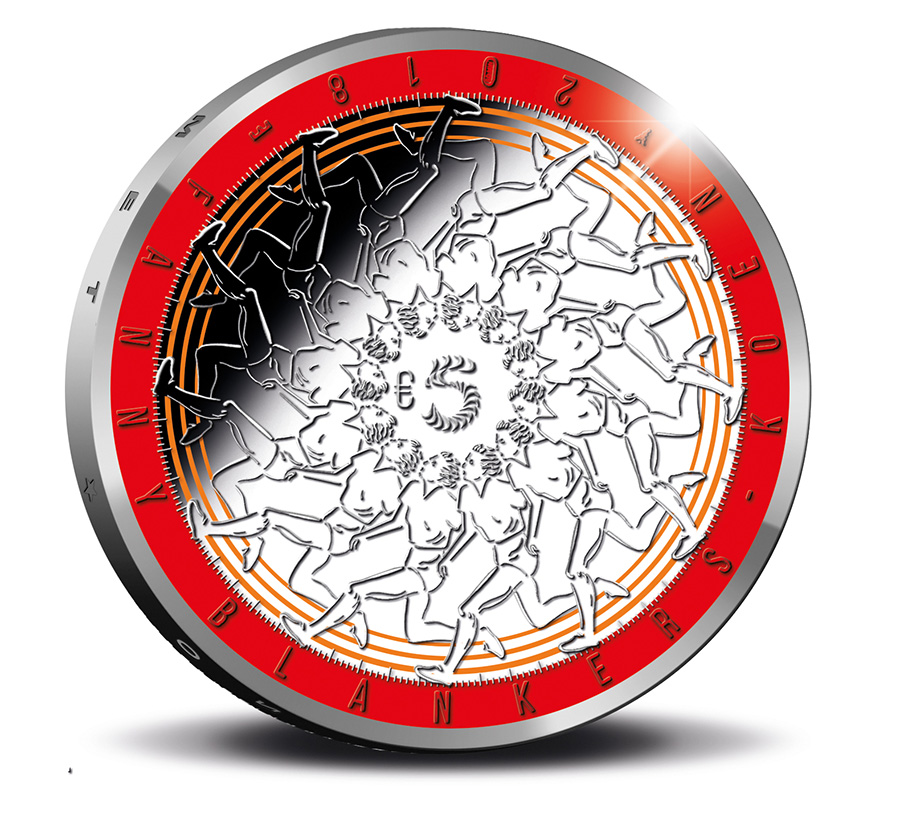 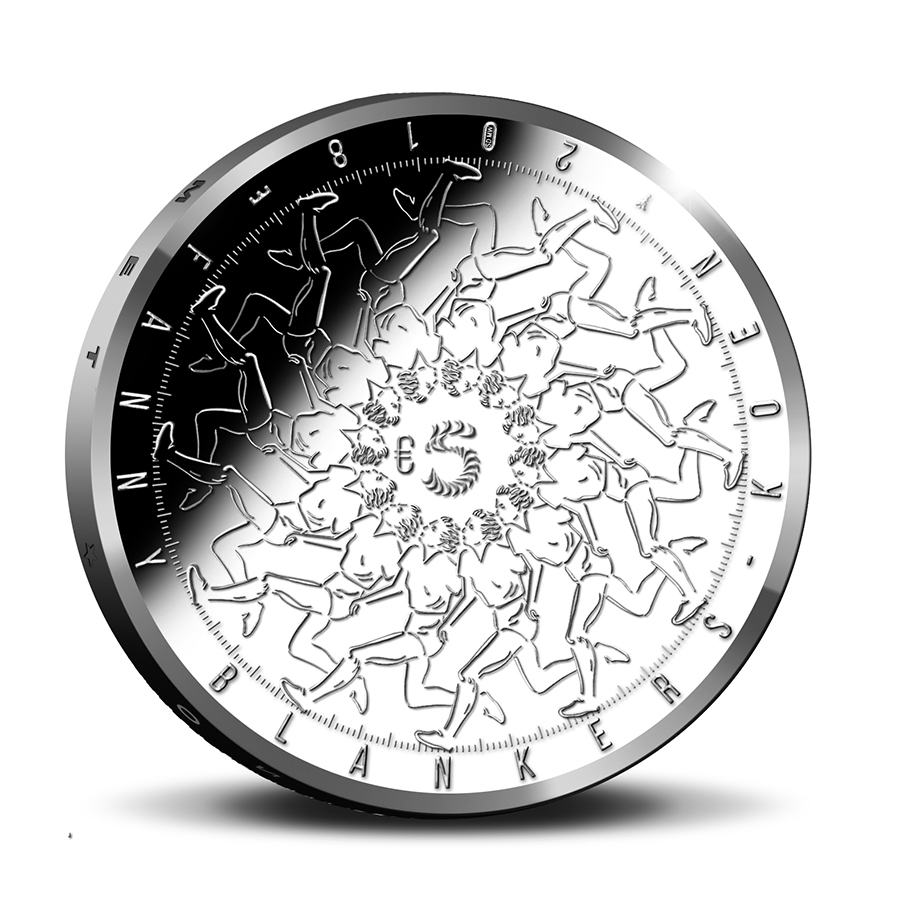 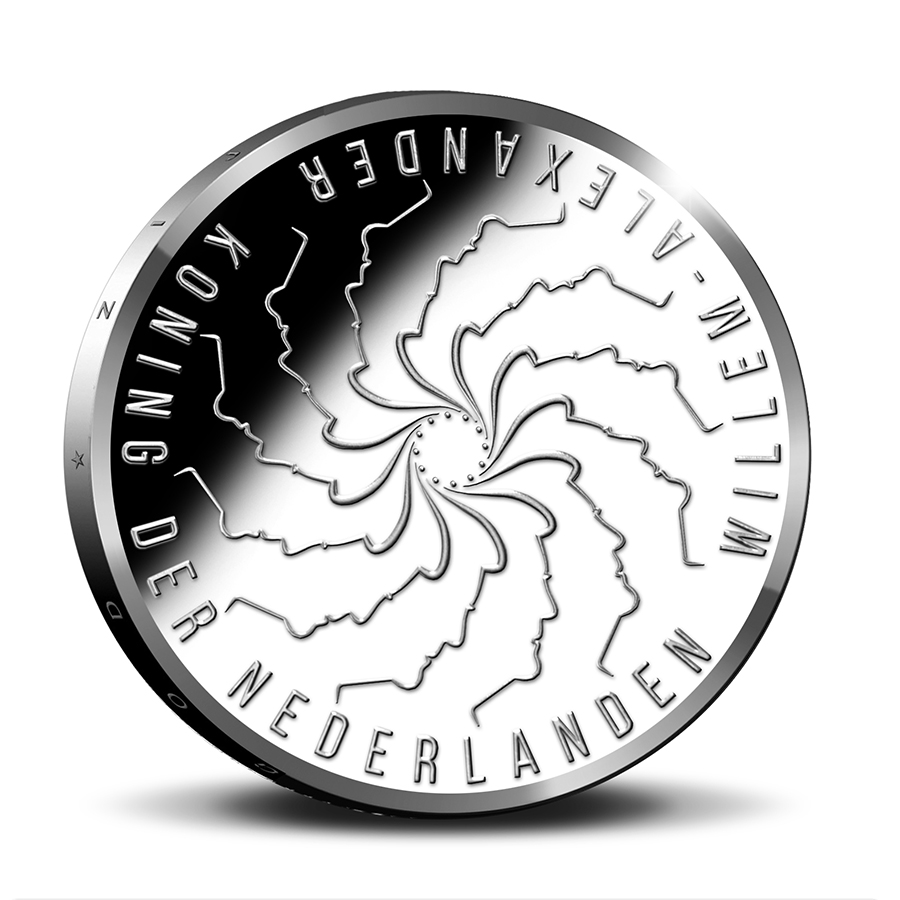 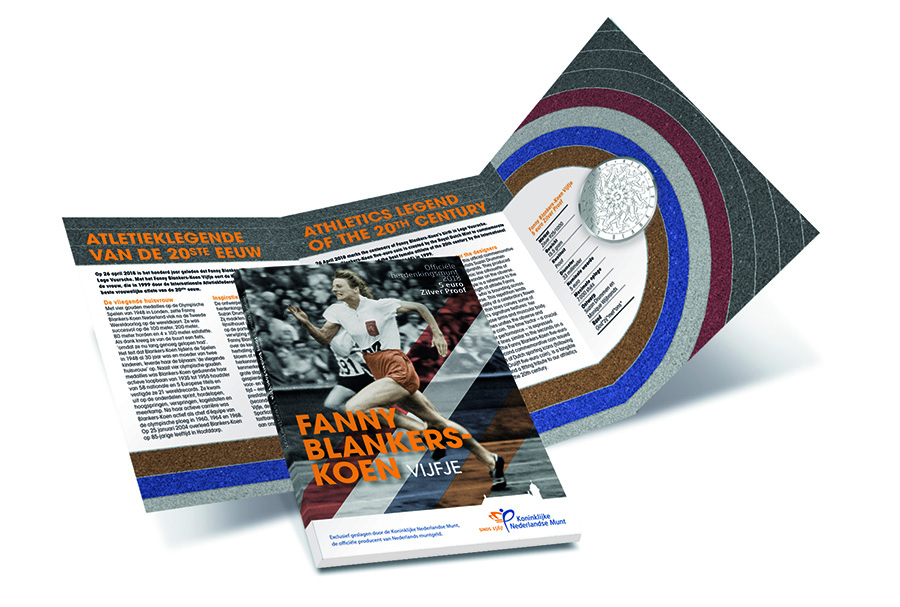 Part of the National Collection®.

Numbered issue, included in the official Coin Card Catalogue. Since 2016, the BU quality commemorative coins have been completely sold out at the Royal Dutch Mint. Part of the National Collection®. 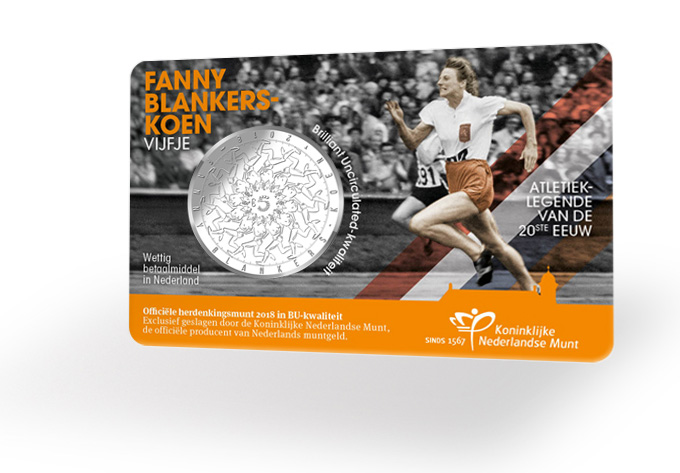 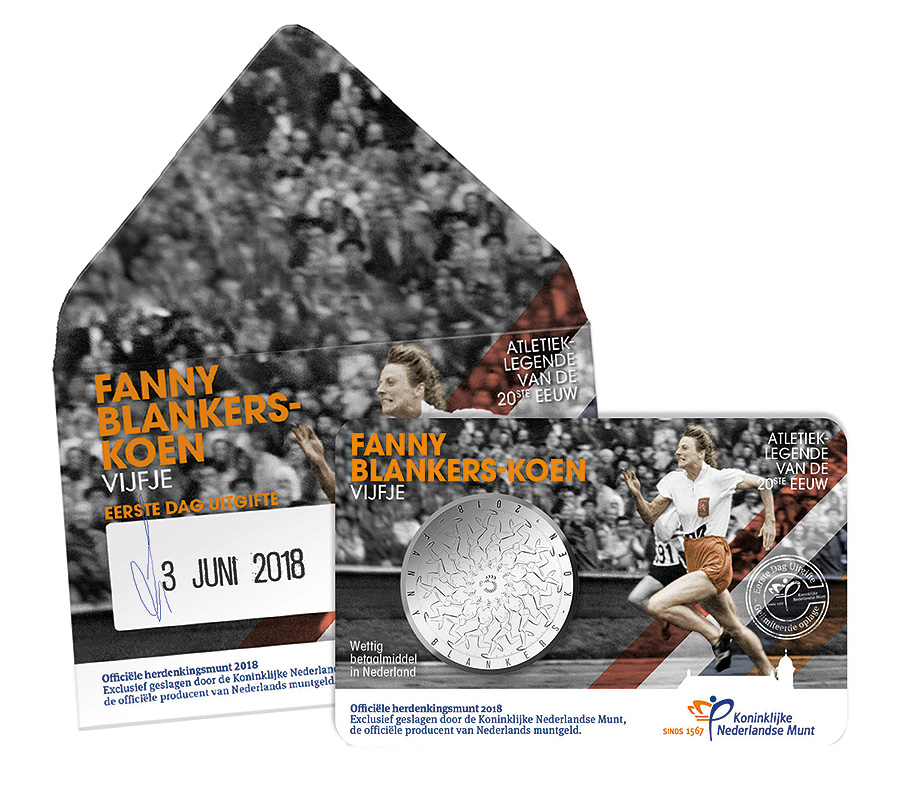 The Royal Dutch Mint will be striking a number of limited and very exclusive themed medallions in honor of athletics. The luxury 5 oz medal. The Silver medallion is made with glass enamel, has a diameter of no less than 60 millimeters and is handcrafted by the Silversmiths of the Royal Dutch Mint. The maximum mintage is 100.

Special feature: made with glass enamel

The Fanny Blankers-Koen 5 Euro Coin is a coin exemplifying speed. The design is dynamic and refers to Fanny Blankers-Koen’s momentum and power. Her very fast times are reflected in a circle of second indicators. Even King Willem-Alexander’s rotating line silhouette on the front shows movement and speed. 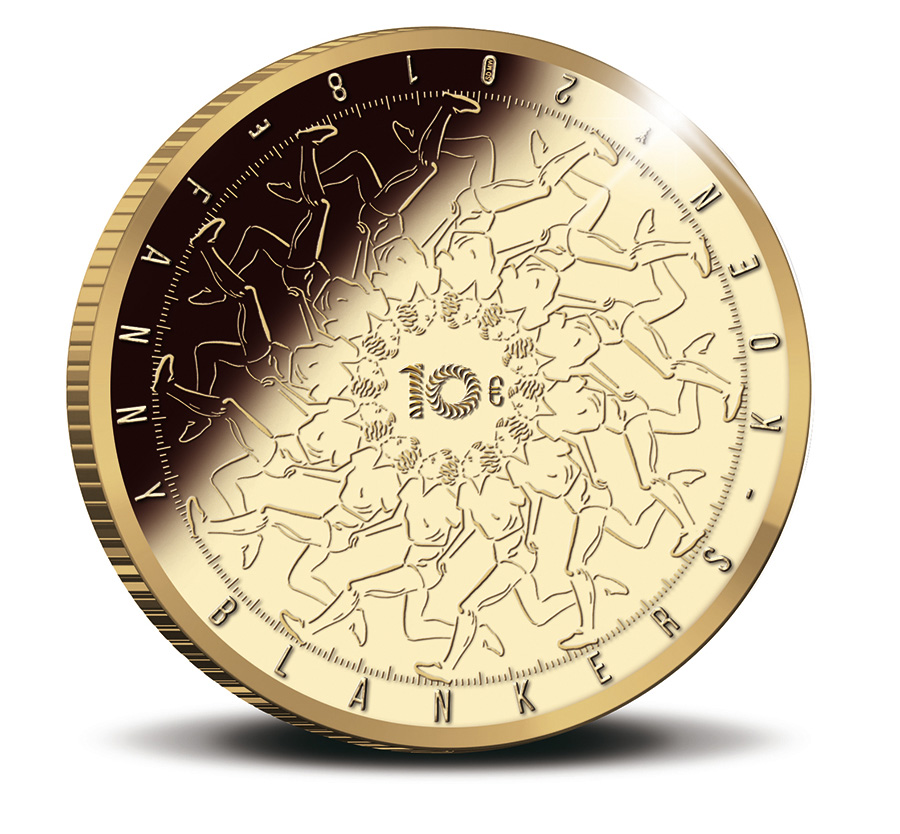 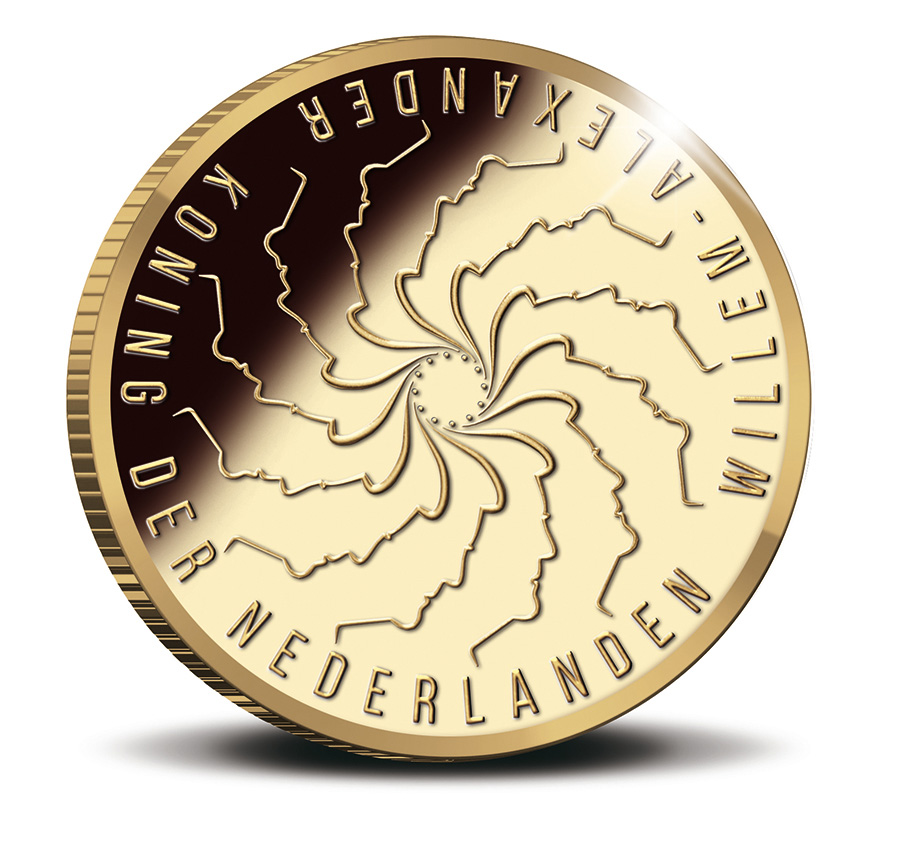 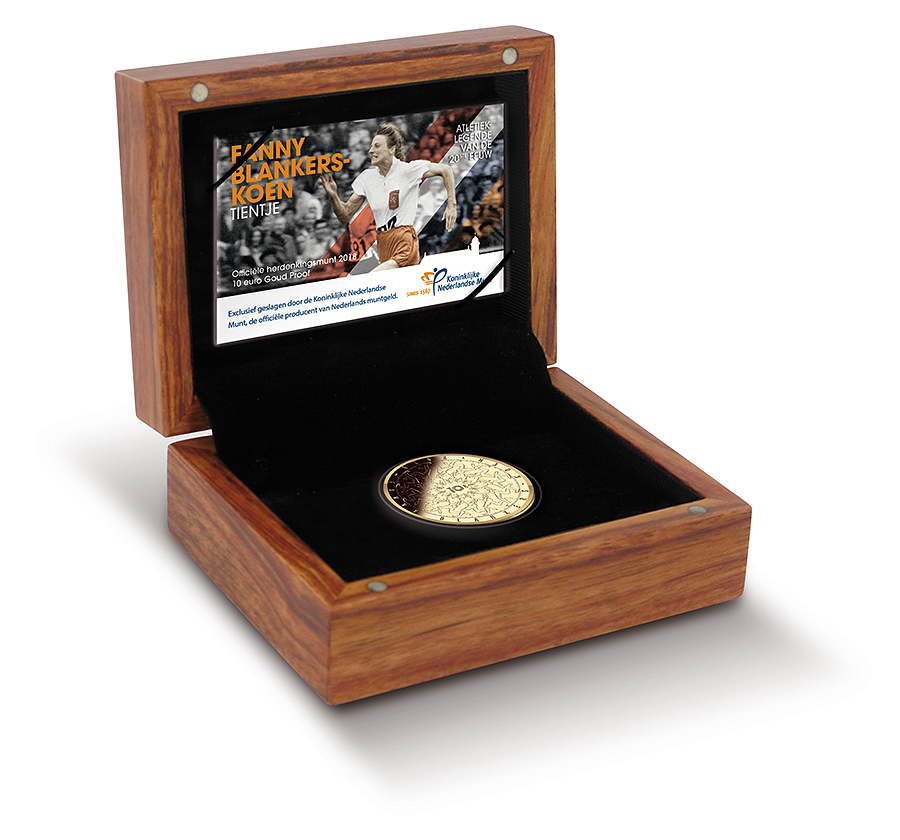 Statue of Fanny BLANKERS in ROTTERDAM