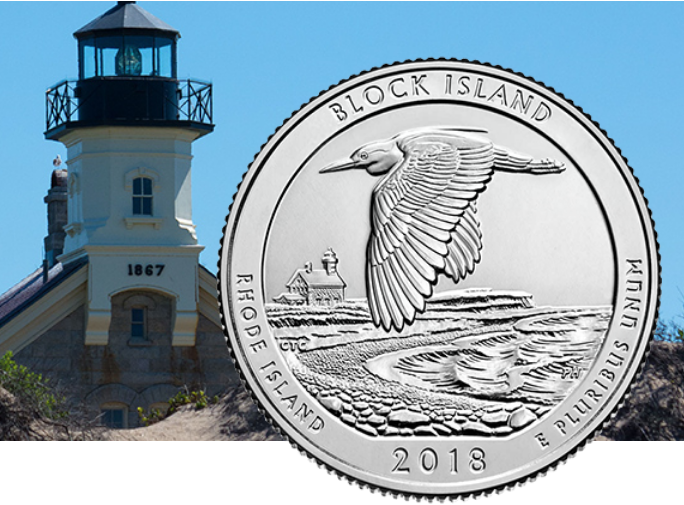 The United States Mint (US Mint) will sell bags and rolls of quarters honoring Block Island National Wildlife Refuge in Rhode Island starting on November 13 at 12AM. This coin is the fifth and final release of 2018 in the America the Beautiful Quarters® Program.

Block Island National Wildlife Refuge is located 12 miles off the southern coast of mainland Rhode Island and sits on a terminal moraine, shaped by glacial till deposits, creating rolling dunes. Covering 133 acres, the refuge is distinctive because the staff works closely with other conservation organizations in an effort to protect the land. One partner, the Town of New Shoreham, operates the adjoining North Light, the island’s first lighthouse built in 1867. It has an interpretive display highlighting the importance of barrier beach habitat and the protection of the piping plover and other migratory shorebirds.

Block Island National Wildlife Refuge is a critical migratory bird stopover point on the Atlantic coast. Fruit-bearing shrubs provide essential food for the species of birds that come to rest there. For many bird species the waxy-gray berry of the native Northern Bayberry shrub holds little nutritional value, but some of the species, such as the yellow-rumped warbler, have a special enzyme that can turn the berries’ wax into energy. These wild lands are also known internationally for spectacular bird watching, and provide a breathtaking walk along the barrier beaches.

The Block Island National Wildlife Refuge quarter reverse (tails) design depicts a black-crowned night-heron flying above a view from the beach at Cow Cove that looks towards Sandy Point. The North Lighthouse is seen in the background.

The inscriptions are “BLOCK ISLAND,” “RHODE ISLAND,” “2018,” and “E PLURIBUS UNUM.” The obverse (heads) features the 1932 portrait of George Washington by John Flanagan and the inscriptions “UNITED STATES OF AMERICA,” “LIBERTY,” “IN GOD WE TRUST,” and “QUARTER DOLLAR.”

The Mint produces the coins in the rolls and bags at three of its six facilities: Philadelphia, Denver, and San Francisco.

The Block Island National Wildlife Refuge quarter is the fifth in 2018 and 45th overall in the America the Beautiful Quarters Program.

Sources: US MINT and NUMISMAG.