On 24 January 2019, the Federal Mint Swissmint will launch three new commemorative coins for coin collectors, enthusiasts and fans. Swissmint is honouring the 100th anniversary of the Swiss national circus Knie by issuing its first coloured coin, which is available for purchase only in proof quality.

100 years of the Swiss national circus Knie on a coloured 20-franc silver coin:

The historical roots of the Swiss national circus Knie go back to the beginning of the 19th century when Friedrich Knie joined a group of performers and thereby founded the Knie circus dynasty. However, it was around 100 years ago that the Knie family laid the foundation for an unparalleled success story and its fame today. The decision was made to buy a tent on credit, and the family celebrated its first show in the 3,000-seater big top on the Schützenmatte in Bern. This opening show was an immense success and drew huge crowds. The idea of having a circus tent was the basis for one of the world’s best known and most important circus companies.

Since then, Circus Knie has been enthusing young and old with opulently staged programmes in its circus ring. Although the Knies lived through some hard times, for instance when the public stayed away for various reasons, the circus family always found its way out of difficult financial situations thanks to mutual family support, strong will and visionary foresight. Circus Knie reinforced its international reputation with various guest shows abroad and innovative shows, for example with the involvement of the Chinese national circus (1984), the Moscow State Circus (1988), Mummenschanz (1988) and Cirque du Soleil (1992). 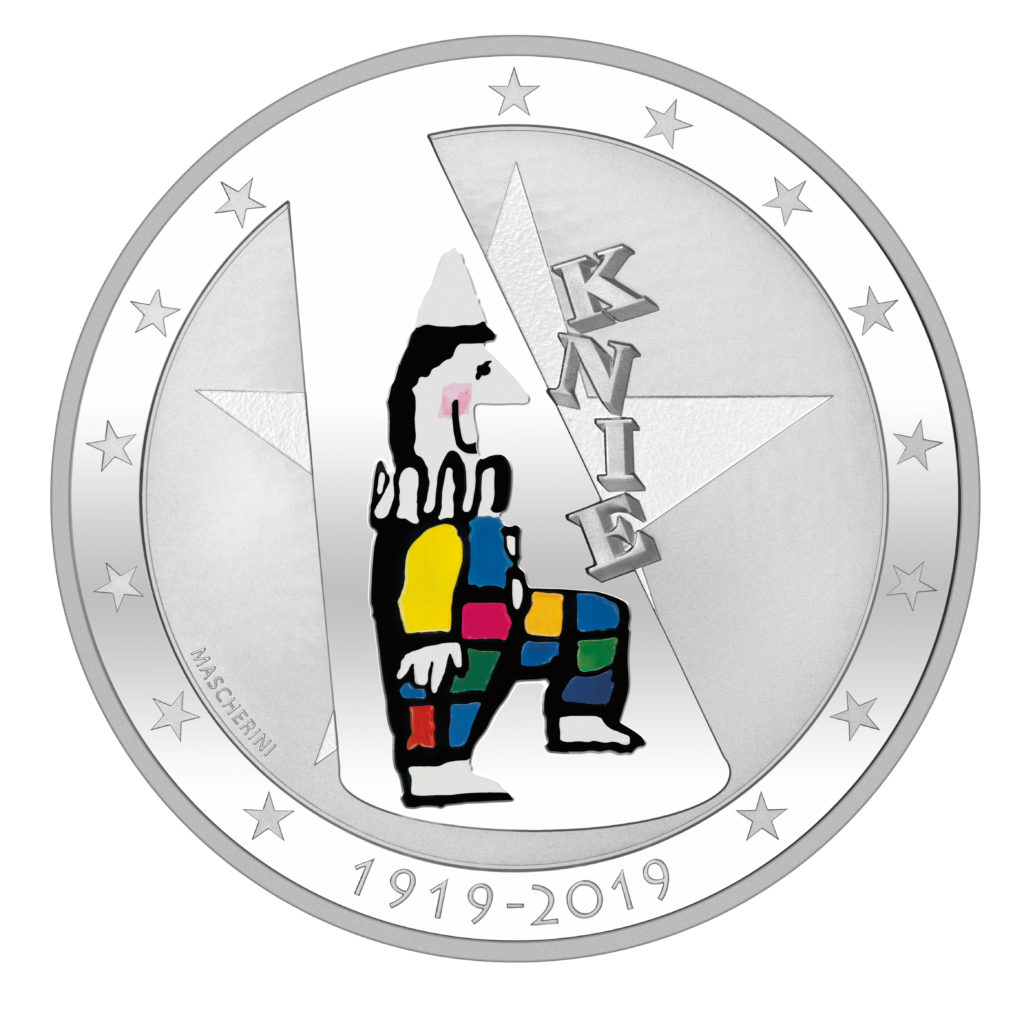 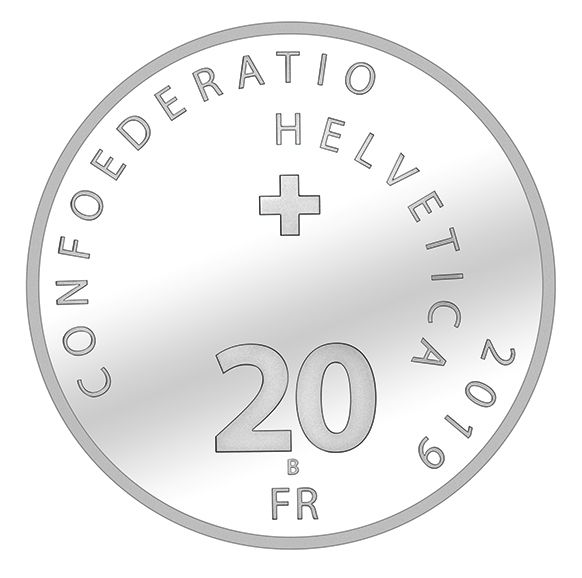 The Federal Mint Swissmint is honouring the 100th anniversary of the Swiss national circus Knie by issuing a silver 20-franc commemorative coin. This is the first multicolour commemorative coin to be launched in Swissmint’s history. This silver coin is available for purchase only in proof quality in a presentation case complete with numbered certificate of authenticity.

The obverse of the  commemorative coin shows a coloured depiction of the famous clown figure created by the advertising  graphic artist Herbert Leupin (1916-1999) in 1956. The clown is juggling a stack of K/N/I/E letters under the spotlight. The coin was designed by Swissmint’s engraver Remo Mascherini.

When she entered into service on 31 July 1906, the “Blümlisalp” steamboat surpassed all other boats on the lakes of Thun and Brienz in terms of size, performance and elegance. The double-deck saloon steamer from the Belle Époque owes its name to the Blümslialp massif in the Bernese Oberland. For decades, the “venerable lady”, as she is affectionately known, was the largest and most luxurious

Thanks to significant private involvement, it was possible to save the “Blümlisalp” and return her to working order. She made her second maiden voyage on 22 May 1992 and has been back in regular service as the BLS fleet’s flagship since then. In winter 2005/2006, the saloon steamer underwent essential renovation at the time of her 100th birthday. At the end of 2012, the Vaporama cooperative steamboat enthusiasts entrusted the operator BLS AG with the “Blümlisalp”, having obtained her in 1989 for the symbolic price of one Swiss franc. Today, the “venerable lady” from the Belle Époque continues to delight passengers with her combination of state-of-the-art technology, stylish ambience and ultimate comfort.

The “Blümlisalp” steamboat is 63.4m long, 13.3m wide and has space for 750 passengers. She has an inclined 650 HP two-cylinder hot-steam condensing  compound engine and can achieve speeds of 25km/h. 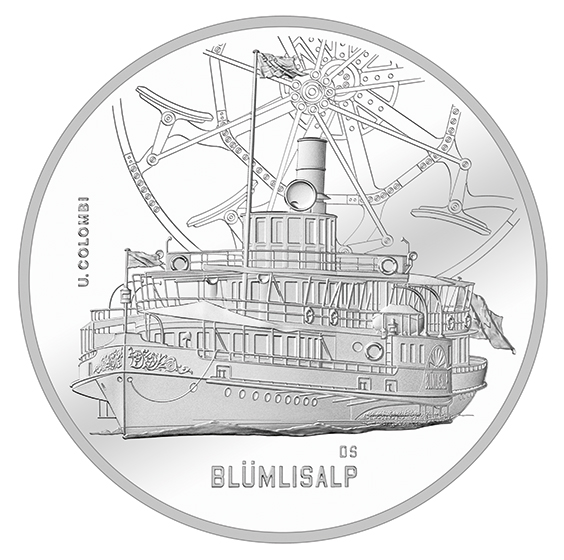 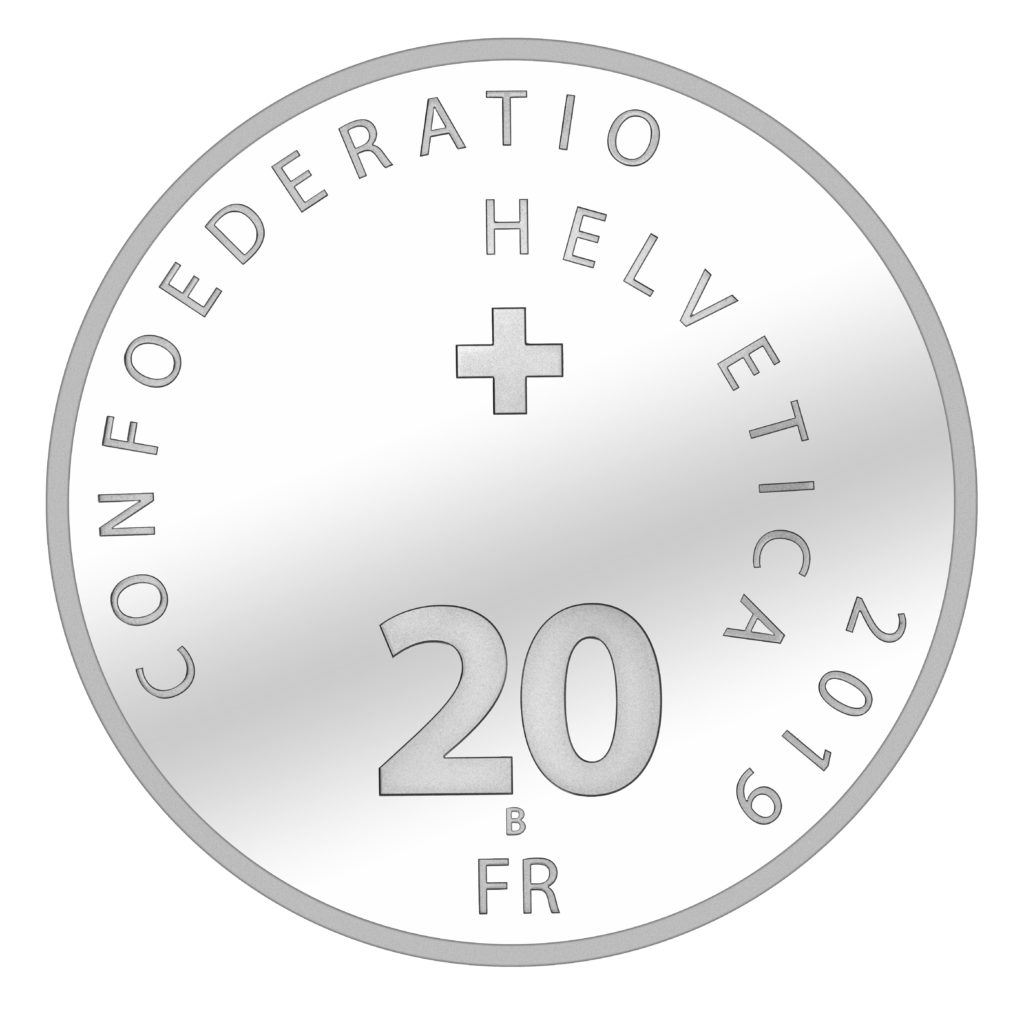 The obverse of the silver 20-franc commemorative coin was designed by marine artist Ueli Colombi from Merligen and depicts the “Blümlisalp” from the front right.

The technical sketches of a paddle wheel can be seen on the top half of the coin. The “Blümlisalp” steamboat silver coin is the last issue in Swissmint’s three-part “Swiss steamships” series.

Its charm, graceful appearance and elegant stotting ensures the shy deer (Capreolus capreolus) a top place in the popularity ratings of native wild animals. But when a deer jumps high and far, it is usually fleeing and has no time to lose. This is how most of us know deer: very shy animals which flee, bolting high and far, at the slightest smell of danger. This is why watching deer grazing peacefully is always a remarkable experience. Roe deer are widespread in Switzerland, mainly in the Mittelland and the foothills of the Alps. The nocturnal animals usually inhabit the edges of woodland and clearings, but increasingly also open farmland. Adult roe deer measure between 93cm and 140cm, and have a shoulder height of between 54cm and 84cm. They weigh between 11kg and 34kg depending on their nutritional status. Roebucks have antlers, whereas female roe deer, or doe, do not. As ruminants, roe deer are exclusively herbivores that prefer high-energy and nutrient-rich plants. The deer is the motif of the first bimetallic coin in the three-part “Swiss forest animals” series. 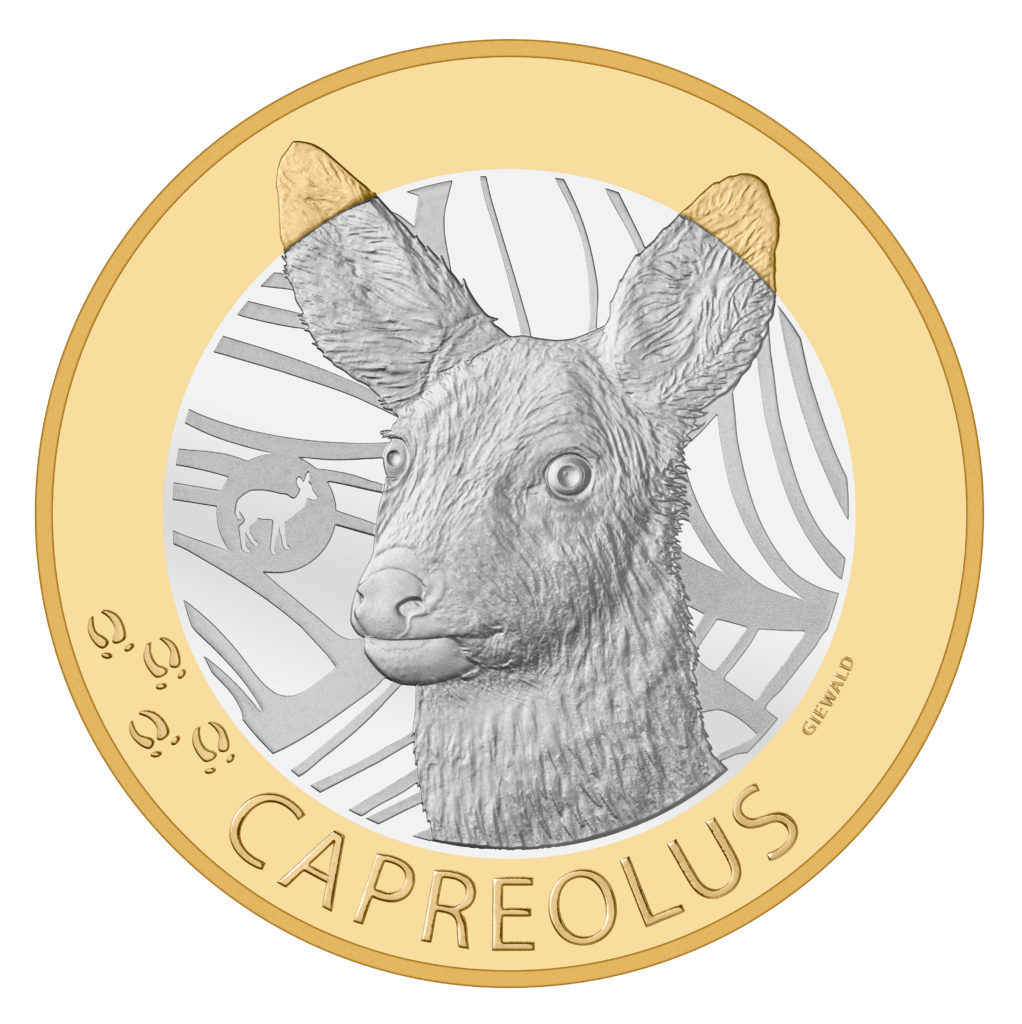 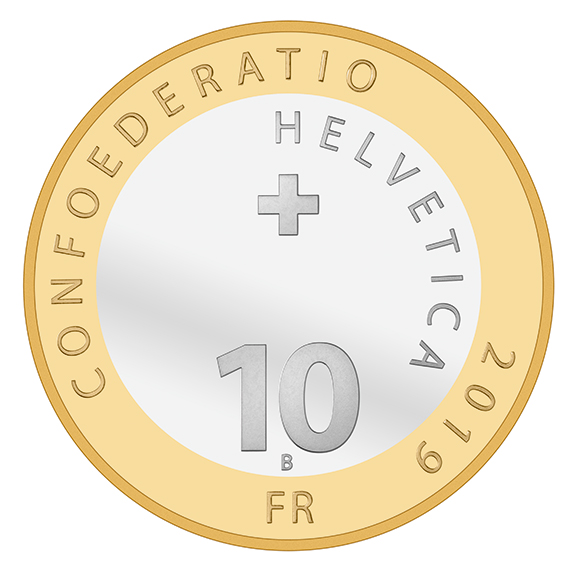 The obverse of the commemorative 10-franc bimetallic coin was designed by graphic artist and designer Naomi Andrea Giewald from Eastern Switzerland. In the centre of the image is a roe deer’s head in profile facing left, to the right the veins of a leaf. A deer’s hoof prints can also be seen on the outer ring.