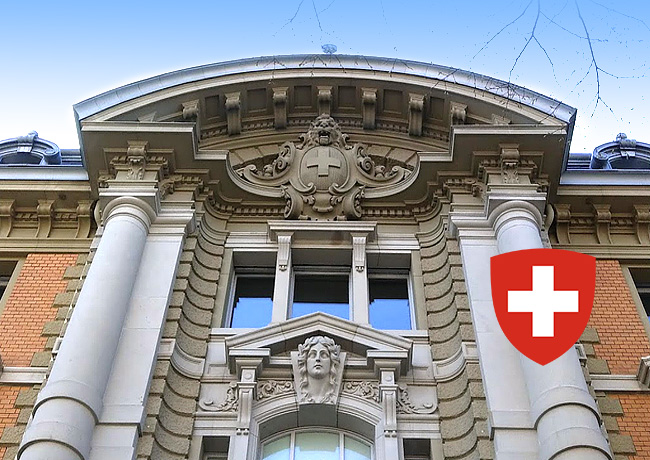 The Swiss Federal Mint, created in 1850, is a small structure in the world of coin issuing institutions in Europe. However, the context in which the Swiss Mint operates has changed at the beginning of 2019. Since this year, SWISS MINT is able to work for other clients than the Swiss Confederation, i. e. the Swiss State itself. 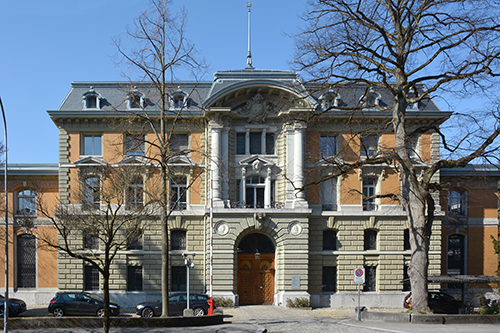 From now on, at least in theory, it can respond to calls for tenders other than those of the Swiss State for coins or medals. There are, if only in Europe, a significant number of countries that issue invitations to tender for the minting of their circulation coins (Estonia, Latvia, Malta, Cyprus, Slovenia or microstates such as the Vatican, Andorra, Monaco and San Marino are among them).

“SWISS Mint wants to develop a private and rather local institutional clientele,” says Christophe TANNER, Head of Marketing at the Swiss Mint. “We would like to present the Swiss-made medal to the public as a corporate gift or as an element of internal memorabilia for large national companies,” says this young executive from the dynamic retail sales sector.

“What we want to highlight is the high numismatic quality of our products”.
It is true that Swiss numismatic productions are renowned among collectors for their minting quality.

The Bullion coin market, on the other hand, does not seem to be attracting SWISS MINT’s attention, although it can boast of having put the first investment coins on the market in Europe in 1935 with the 20 francs gold “VRENELI”, technically named coin-ingots, according to the Swiss legal definition and whose yearmark is therefore preceded by the letter “L”.

“In this market, margins are too low and very large quantities would have to be sold for this to be of real economic interest to the Swiss issuing institution,” continues Christophe TANNER.

The workshops of the Swiss Mint are in any case very rational and the equipment ranges from the classic money press to the latest packaging robot. 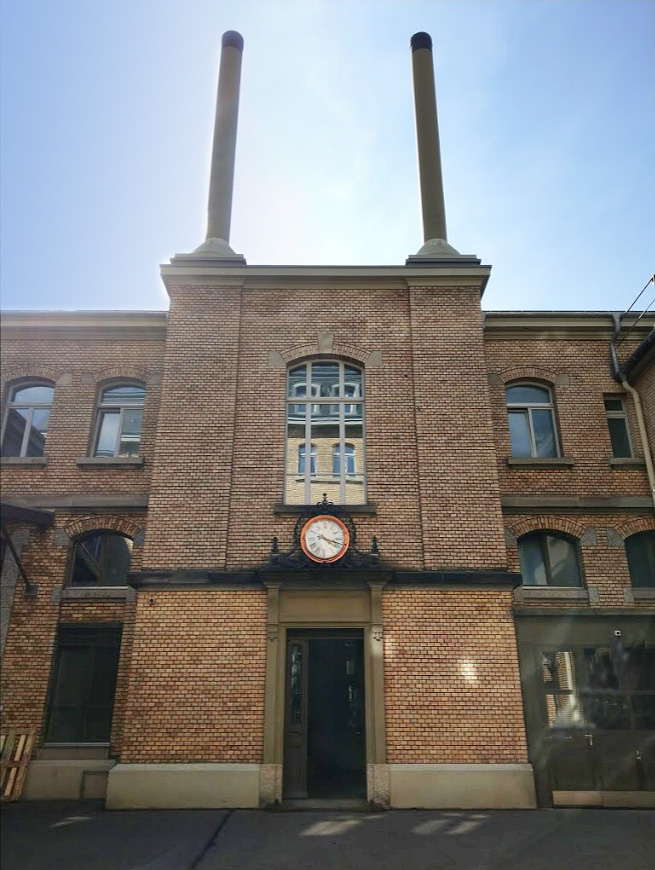 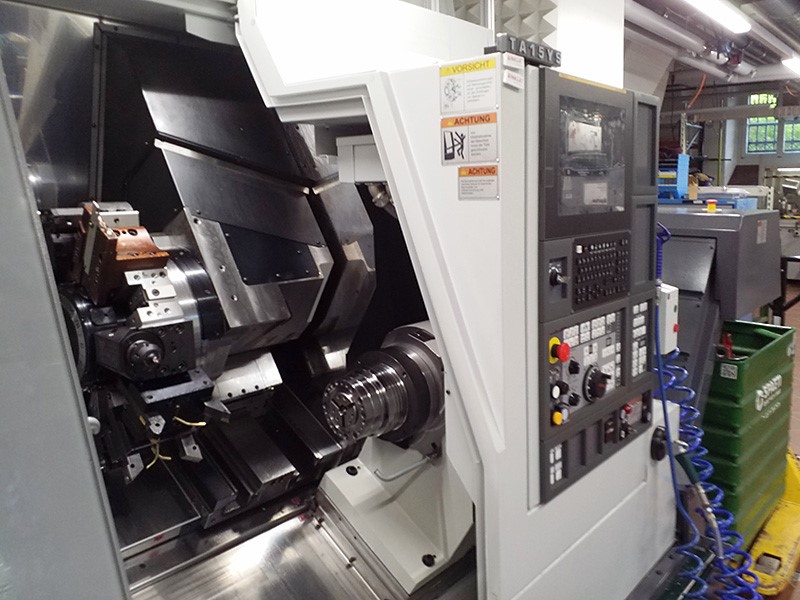 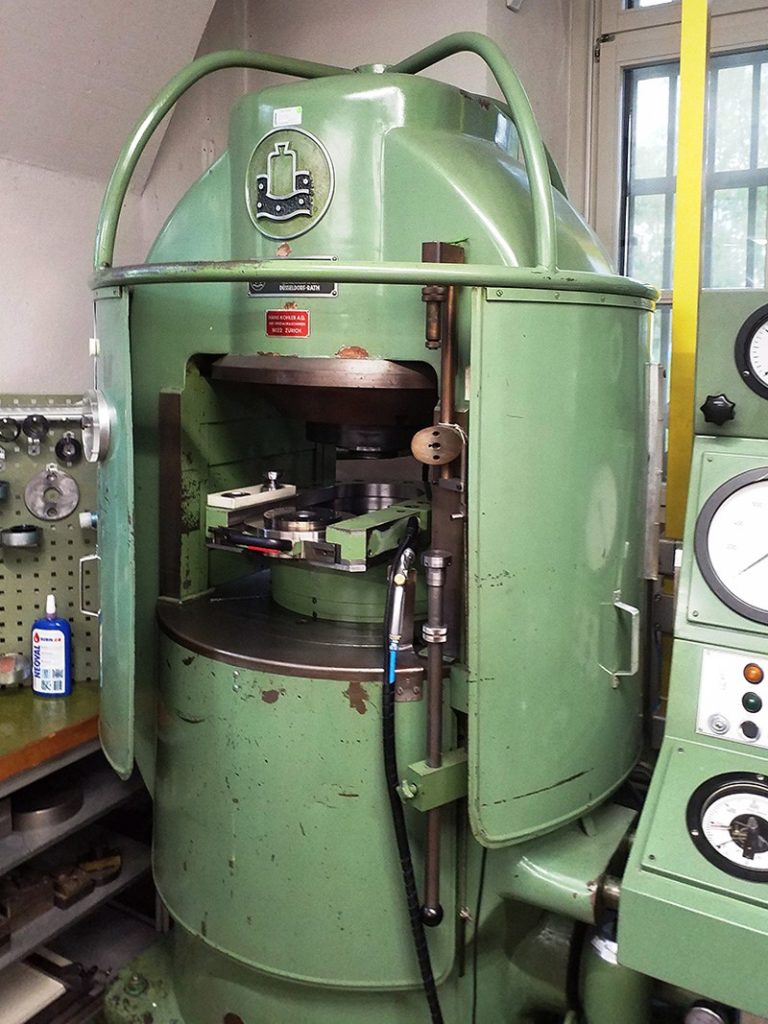 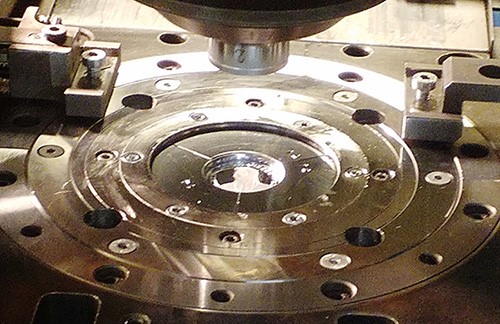 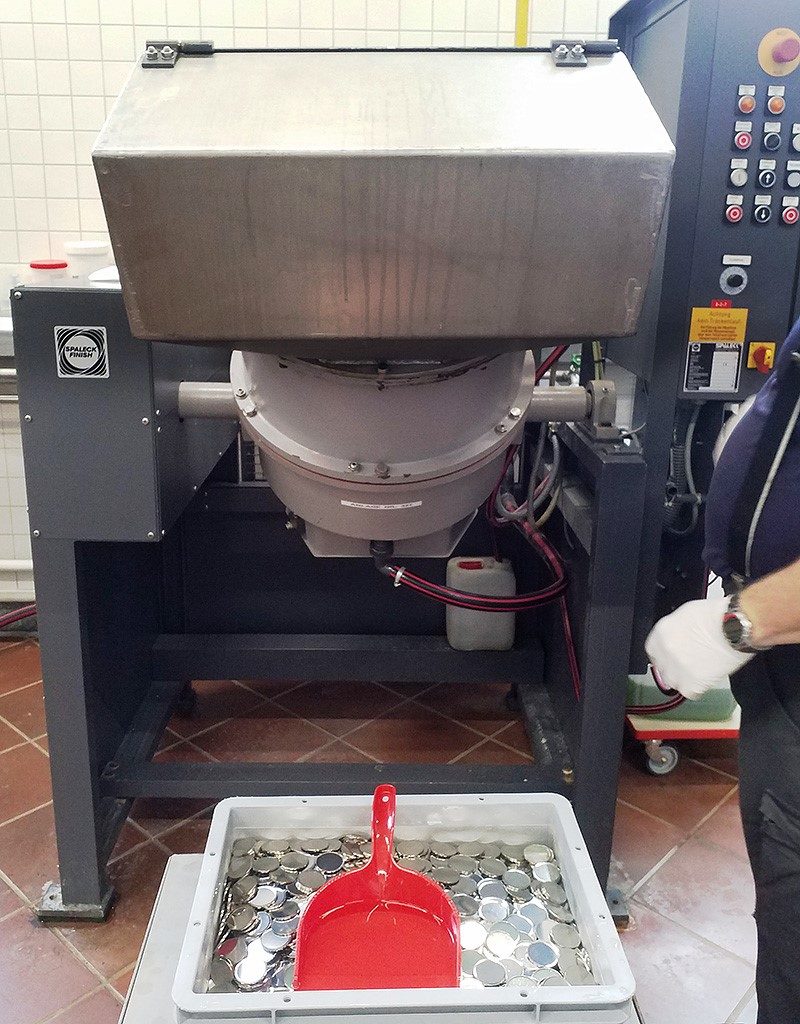 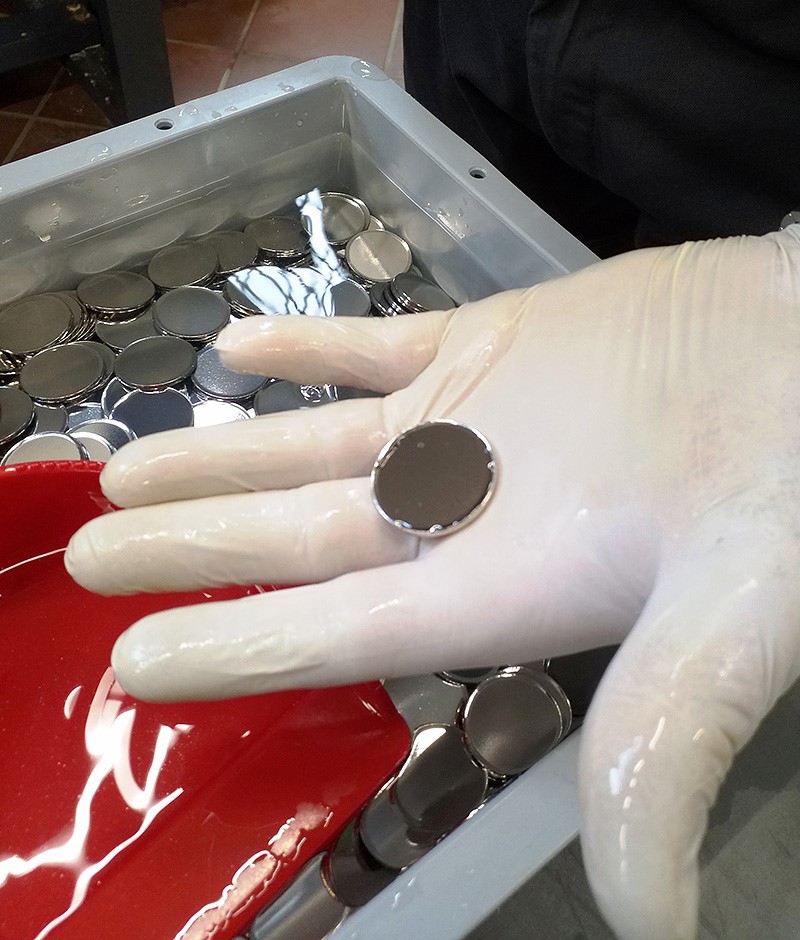 The result of polishing step on proof blank 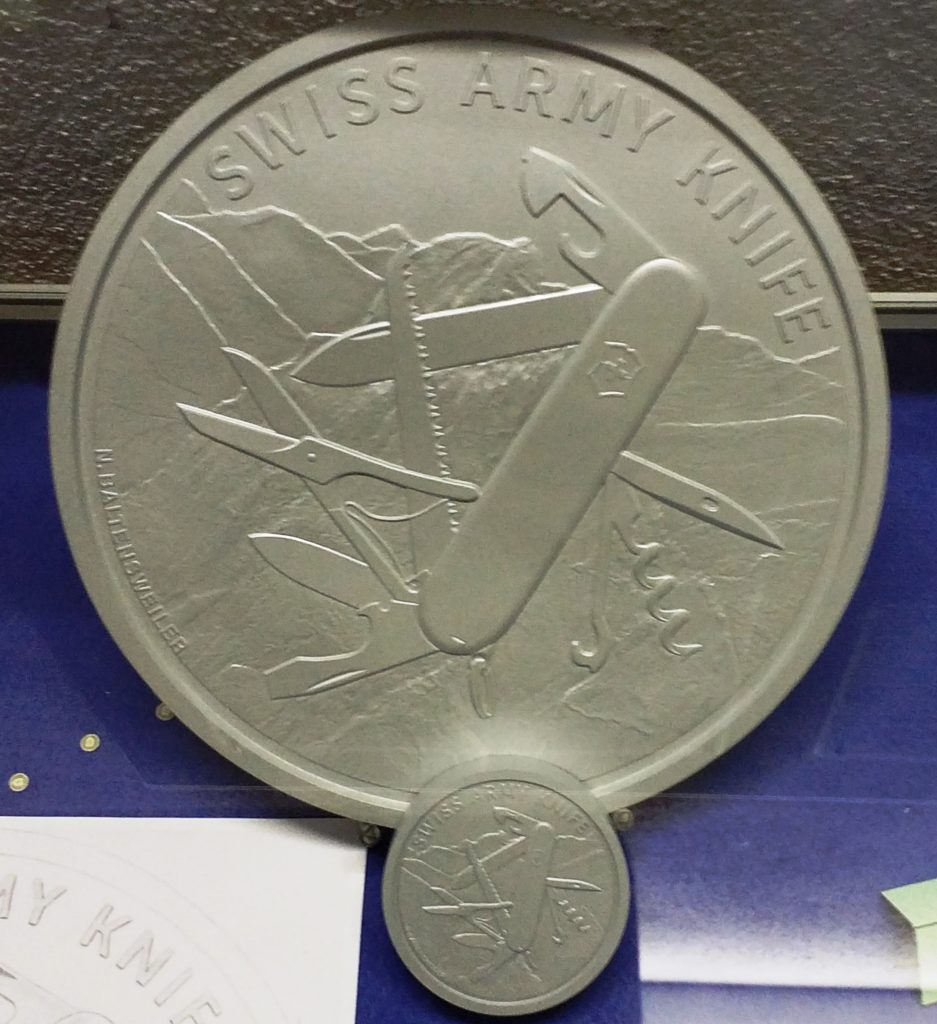 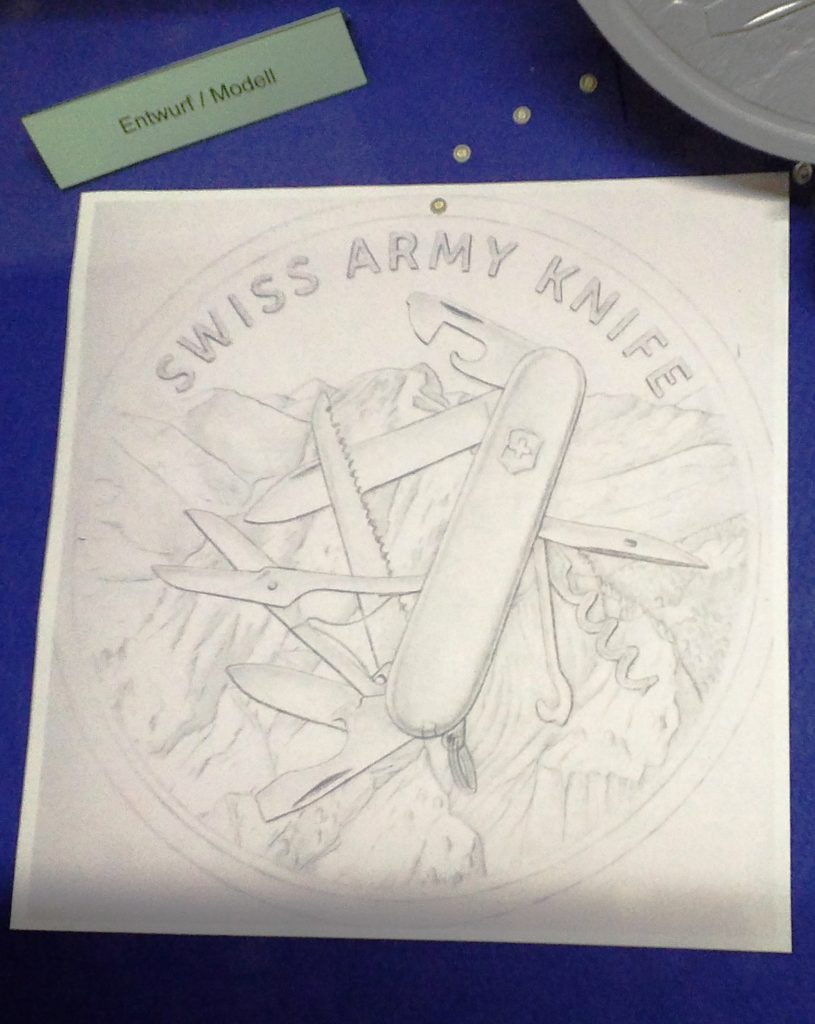 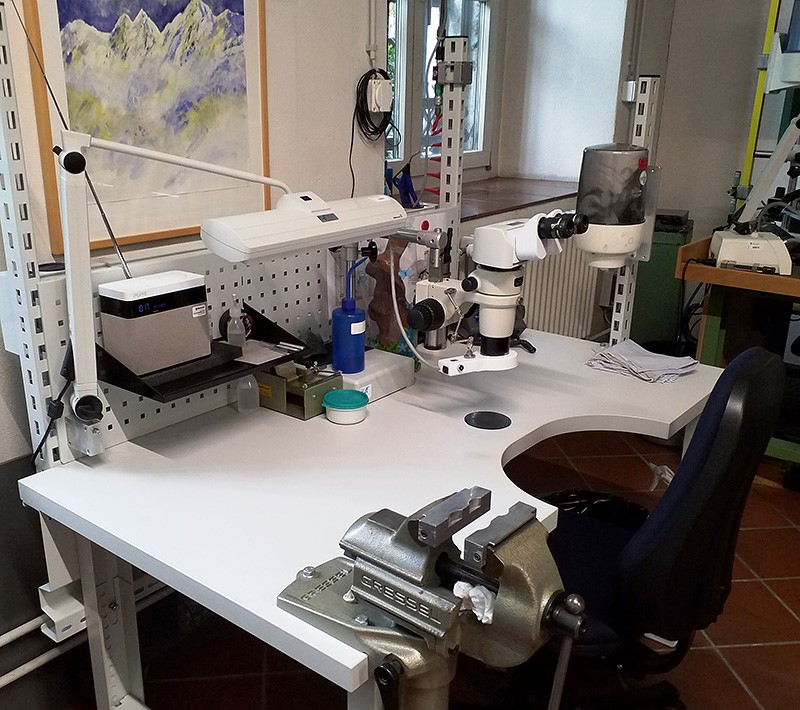 We also had the opportunity to meet Mr REMO MASCHERINI, engraver of the Swiss Mint. The design of Swiss coins is generally outsourced to an artist, outside SWISS MINT. But it remains for the Mint engraver to translate the artist’s 2D drawing into volume and to add relief. On a silver blank such as those used by the Swiss Mint for its commemorative coin creations, the relief impression is created in a shallow depth, in the order of one or two millimeters. We can therefore only be admiring the Appolo XI moon landing 2019 coin and the rendering of the relief on the obverse of the coin, especially with regard to the lunar ground. 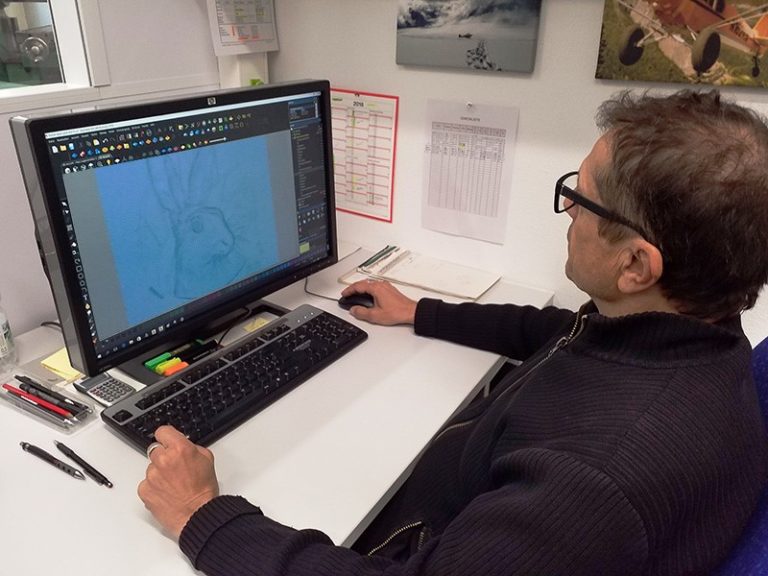 Remo MASCHERINI at his engraver’s bench, computerizing a coin project 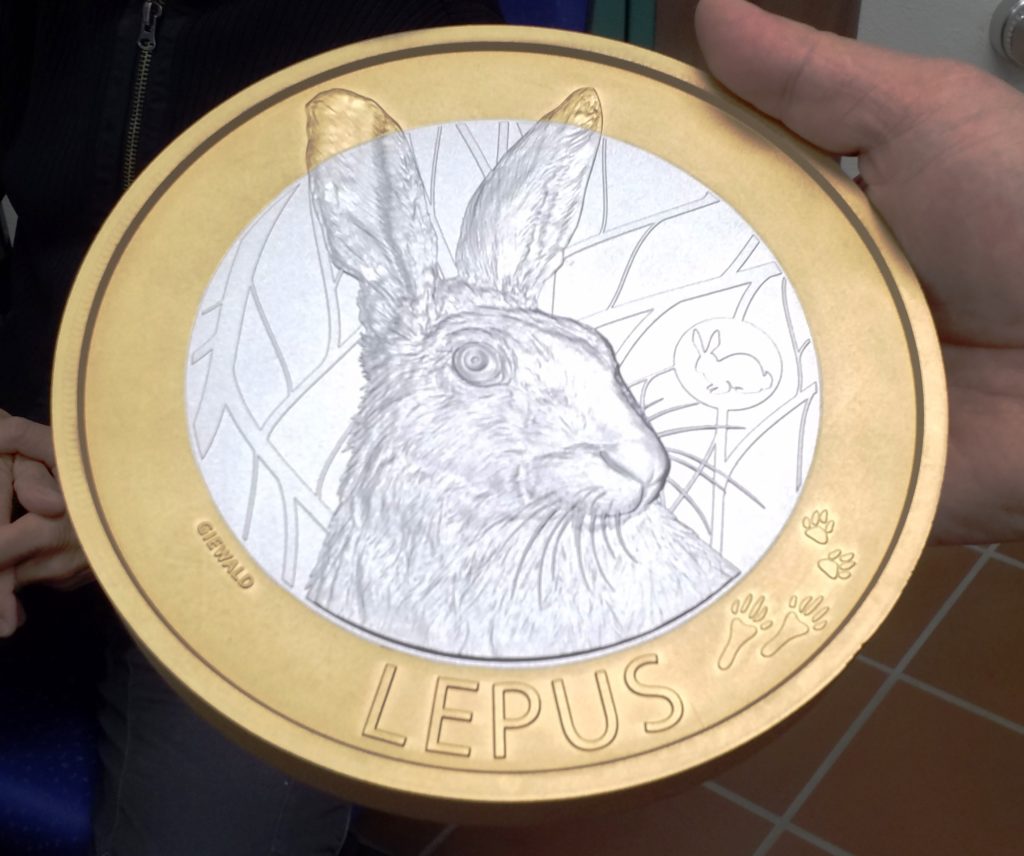 Plaster model of the coin project

We were also able to take pictures of the coin dies for the gold coin dedicated to the crocodile locomotive and the Appolo XI moon landing coin.

On May 9th 2019, the SWISS MINT Federal Mint will issue two new non-circulating commemorative coins. With a coin dedicated to the crocodile locomotive, type 6/8 II, it honorates the centenary of the electric locomotive. 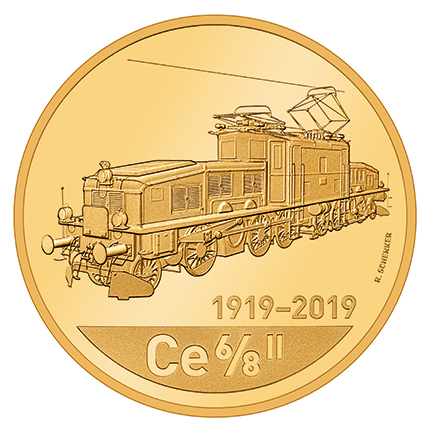 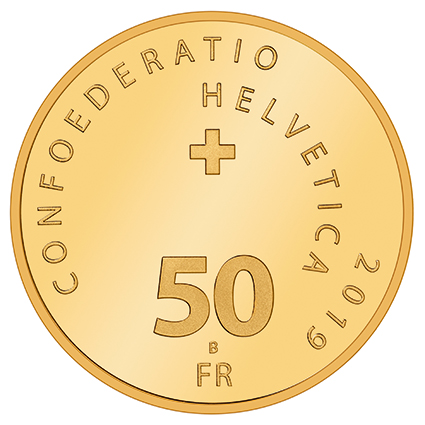 Ten of these robust locomotives had been ordered by the Swiss Federal Railways in 1918 to tow freight cars on the GOTHARD line.

The specifications at the time specified that the locomotive had to be able to tow a freight train twice in 28 hours on the Goldau-Chiasso route, for a total weight of 860 tonnes for each train. 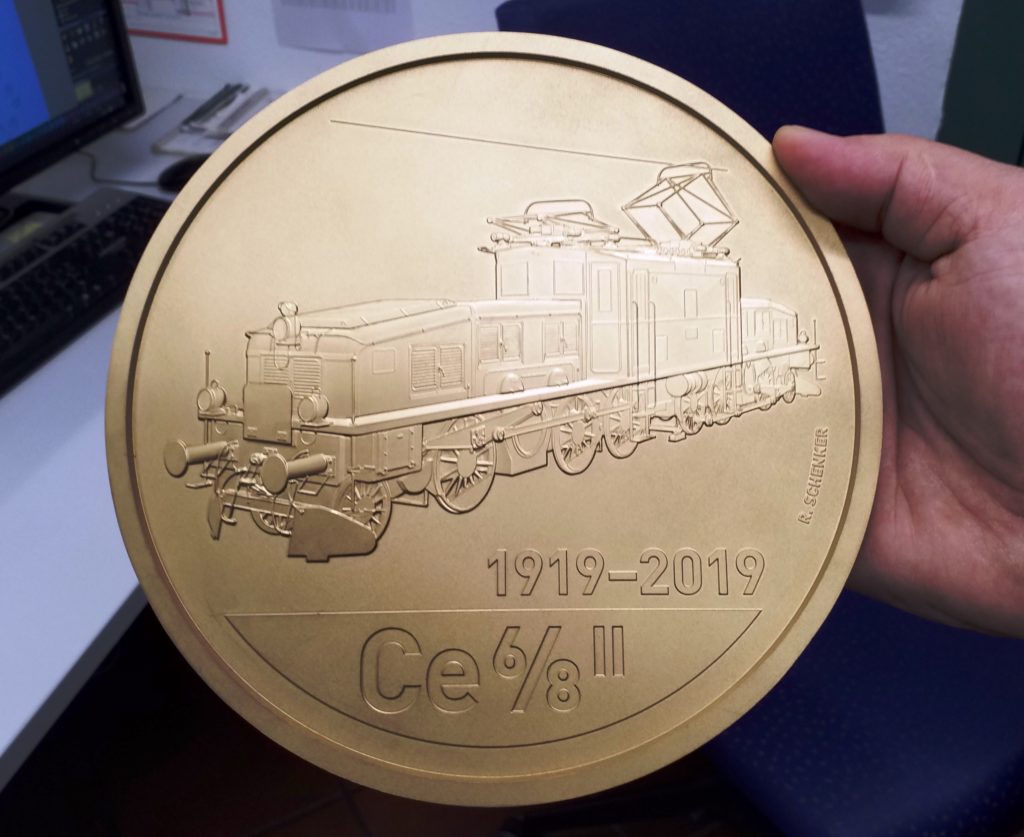 15 new units were to be ordered between 1919 and 1921. The originality of the locomotive for the time was the articulation of the two power sections in relation to the central cab. 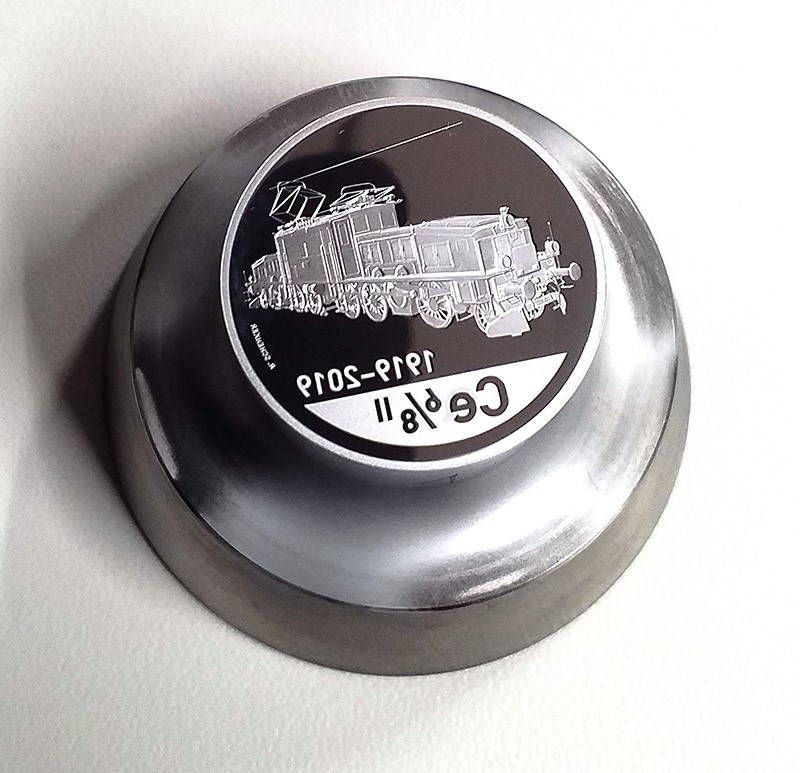 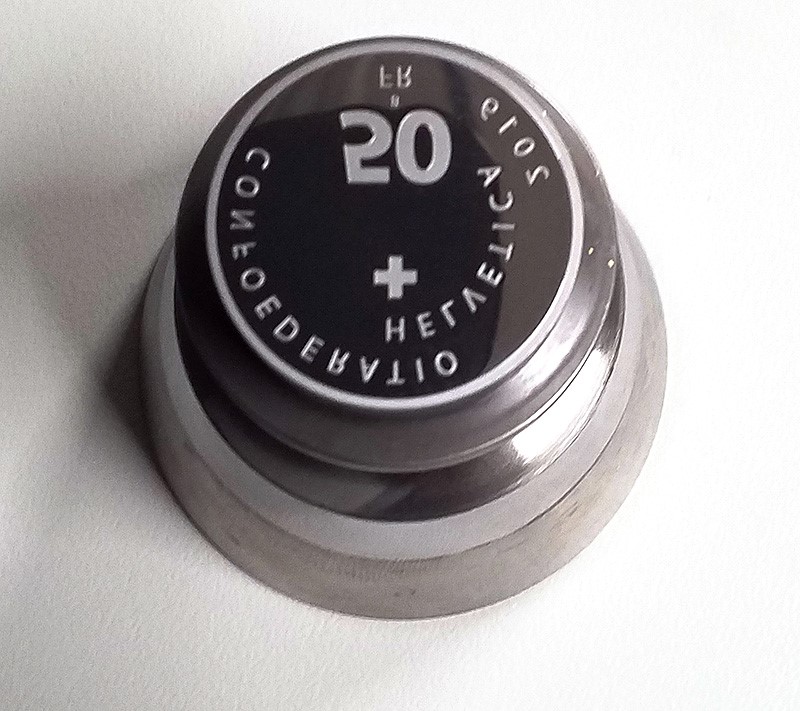 They were finally replaced in the 1950s on the Gotthard line. They continued to tow gravel trains weighing up to 1200 tonnes. A copy of these locomotives is on display at the Swiss Museum of Transportation, while the Swiss company SBB Historical offers special trips on board of another Crocodile locomotive.

The Swiss Mint is commemorating another event. These are Man’s first steps on the moon. This coin was designed by Remo MASCHERINI, engraver of the SWISS MINT. The drawing was then digitally reworked to give its relief, particularly on the lunar ground, the solar sail and the astronaut’s suit, which were well rendered by the engraver’s work. 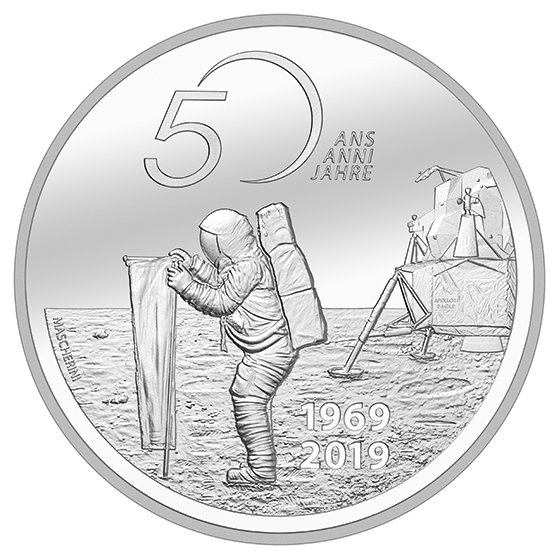 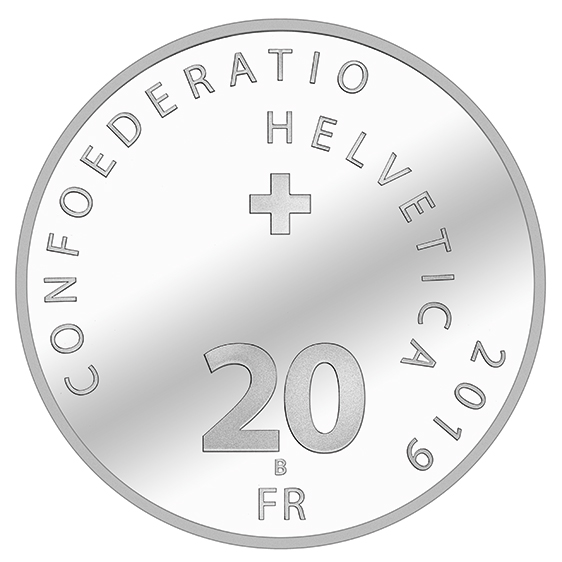 This coin recounts the adventure of Buzz Aldrin and Neil Armstrong who were the first men to walk on the moon, on 07/21/1969. On board the Appolo XI mission was a solar sail designed and manufactured by the University of Berne, SWITZERLAND. Its purpose was to highlight the existence of the solar wind that was suspected to exist but could not be measured from the earth.

The sail was made of aluminium foil that had undergone various treatments to trap possible particles of the solar wind. Once back on land, the sail was analysed by the laboratory of the University of Berne. This experience will be repeated several times during the US space adventure. 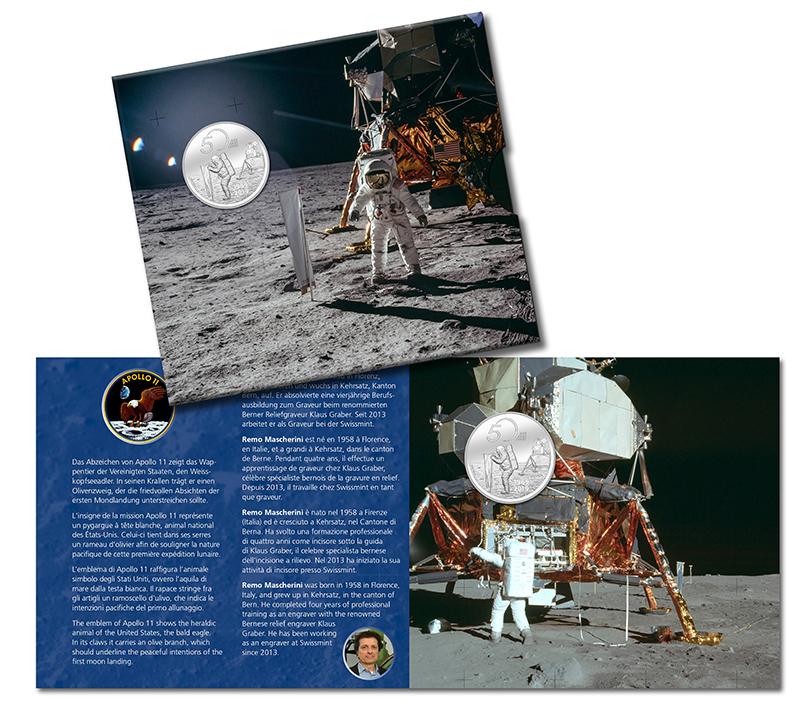 Centenary of the crocodile locomotive:

As far as circulation coins are concerned, the Confederation’s order in 2019 is falling but remains quite high with a global minting quota – all face values combined – of 70 million coins.

All values of the divisional circulation series are expected to be struck in the coming years. Unlike the euro zone, the Swiss government does not seem to want to remove the smallest face value, the 5-cent or 5 rappen coin, which is equivalent to 0.043 euro cents. 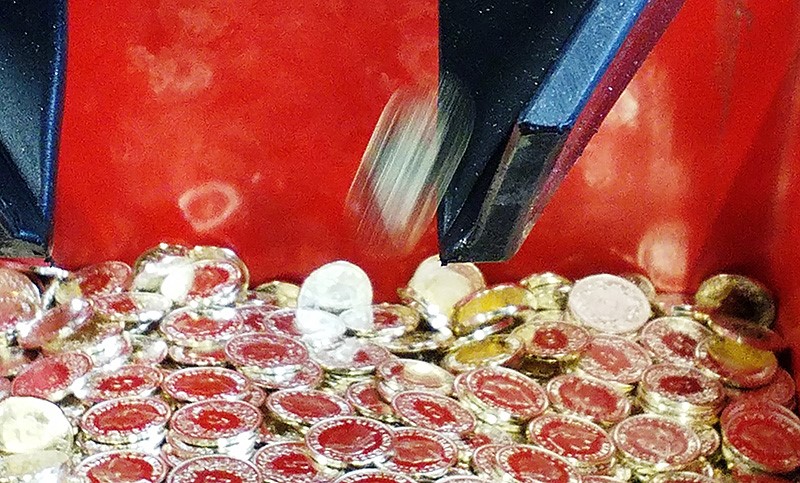 The Swiss government does not seem to be in favour of a cashless society, a model that prevails in countries such as Sweden and that the European Commission would like to see become widespread in the euro zone.

Switzerland will issue a final commemorative coin in 2019 dedicated to the FURKA pass. This coin is part of a series dedicated to high altitude mountain passes in Switzerland.

The Swiss Mint will issue its last collector in september 2019. It is a “pattern” coin dedicated to the KNIE circus. A first coin  was broadcast on this theme, earlier this year. Unlike the initial coin, the “trial” version, or rather the first strike – limited edition, will not be coloured.

This traditional collector in Swiss numismatics is generally very popular with collectors. 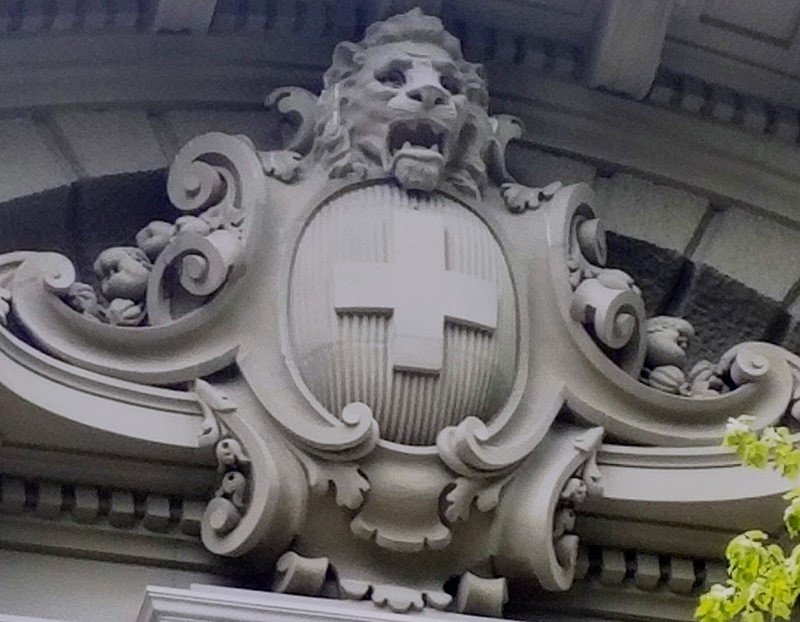 heraldic lion on the pediment of SWISS MINT main entrance