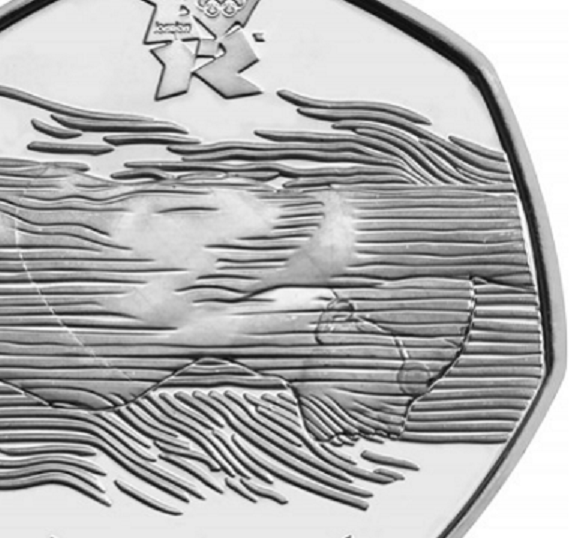 We are back to the year 2011, the Royal Mint struck an early version of 50 pence swimmer coin that will become the “must have” in 50 pence coins collecting, because it became the rarest 50 pence coin, since 1969.

In October 1969 the 50 pence coin joined the 5p (shilling) and 10p (florin) coins in circulation, leaving only the three copper coins – to be introduced on 15 February 1971 – to complete the new series of decimal coins. The design on the reverse of the 50 pence coin features a symbol of Britannia that has appeared on UK coinage since 1672. While this design may have been traditional, the shape of the new 50p coin, an equilateral curve heptagon, was revolutionary at time. This made it easily distinguishable from round coins, both by feel and by sight, while its constant breadth allowed it to roll in vending machines.

With the introduction of smaller 5p and 10p coins in 1990 and 1992 respectively, the 50p became the largest coin in circulation. In October 1994 the Government announced a further review of the United Kingdom coinage. The results revealed a requirement for a smaller 50 pence coin, which was duly introduced on 1 September 1997.

Since its issue the 50p has been used on several occasions to celebrate important events, each being commemorated by a new reverse design, from United Kingdom’s accession to the European Economic Community in 1973 to physicist Stephen HAWKING in 2019.

The Royal Mint was the official licensee for the manufacture of coins for the London 2012 Olympic and Paralympic Games. The popular London 2012 sports collection of 50p coins was part of licencee’s products.

The Aquatics 50p was the first coin in the series of 29 coins and depicts a swimmer submerged in water, with the London 2012 logo above and the denomination, “50 PENCE”, below. 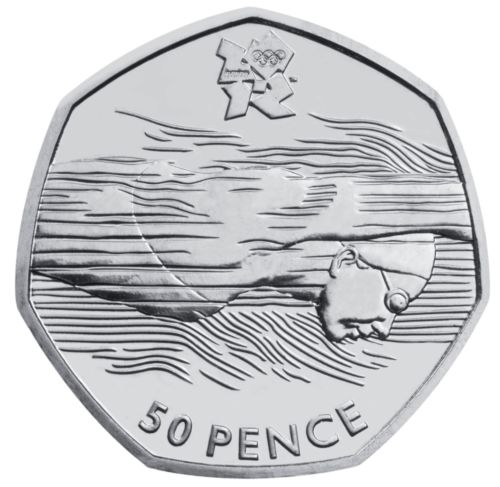 The common circulation version of 50p coin,  without waterlines on swimmer face

The rarest 50p coin, with waterlines on swimmer’s face

Issued By: The Royal Mint

The price indicated above is for a coin from general circulation, however the coins were also available from The Royal Mint website in a BU coin pack (number 1/29) and had an original price of £2.99.

But, only 600 of the Aquatics 50 pence coins were issued with the water symbolized with horizontal lines covering the face of the swimmer, before it was changed to a version without water lines across the face.

What is worth of the early version of the coin (full waterlines version)?

Due to the very low mintage of the early versions, prices on coin market are quite impressive for such a coin. 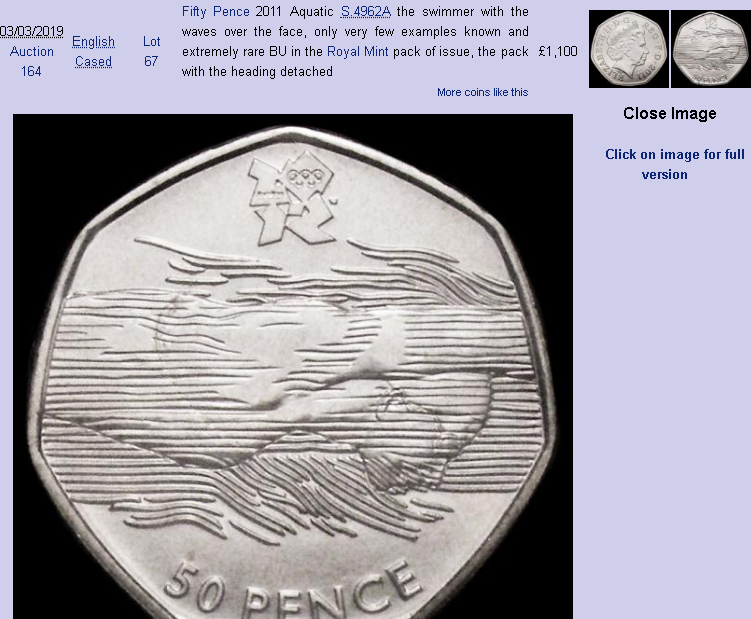 An older sale on ebay, the coin stays very valuable through time!

This coin appear to be one of the masterpiece of post 1969 coins collectors, especially for monographic collectors that is to say people that only do collect modern 50p coins.