Artist Wineke Gartz is the designer of the Jaap Eden commemorative coin. The Netherlands are proud of their skating champions. That certainly applies to Jaap Eden. On the ice rink next to the Rijksmuseum in Amsterdam, the current museum square, he became world champion on January 14th in 1893. He could not have imagined that, at only 19 years old, he would stand at the beginning of a long tradition which has become part of dutch identity.

Jaap Eden was not only the best in the world on the ice, but also on a bicycle. Powerful, fearless, and headstrong. His name is synonymous with victory. Whoever is voted the best sportsman or sportswoman of the year in the Netherlands wins the “Jaap Eden Trophy”.

Jacobus Johannes Eden (Groningen, October 19, 1873) became one of Netherlands’ greatest sports legends at the end of the 19th century. Although that was more than 100 years ago, his exceptional achievements are still widely recognized in our country. For example, the annual sports prize “Athlete of the Year” was named after him and the Jaap Eden Ice Rink was opened in Amsterdam in 1961. 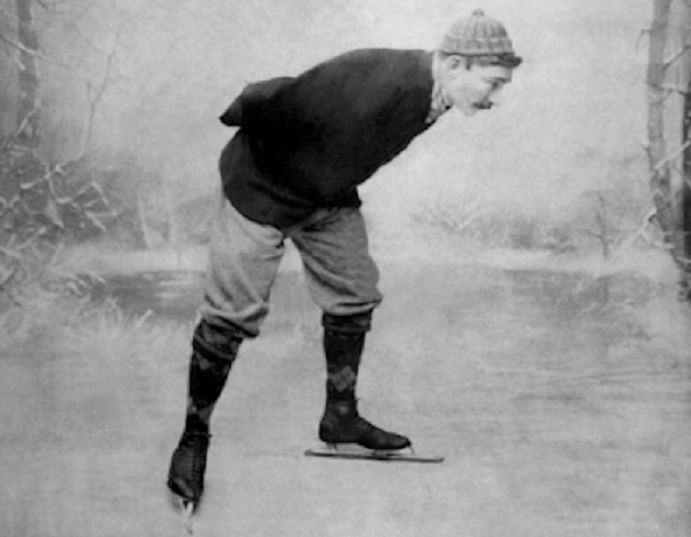 As a child, Jaap Eden was very active in sports in and around the Kennemer Dunes. At the age of 15 he was discovered by Klaas Pander, who became his skating trainer. In December 1890 he won his first speed skating competition. His international debut followed a year later and in 1893 he won his first world title at the age of 19. The following year he broke two world records, of which his record on the five kilometers lasted 17 years. He improved his own world record with the 10 kilometers, a year later. In 1895 (Hamar) and 1896 (St. Petersburg) he won the world title, again. Jaap Eden was also successful as a cyclist with a world championship (1894) and a world record in the 1,000 meters (1896). 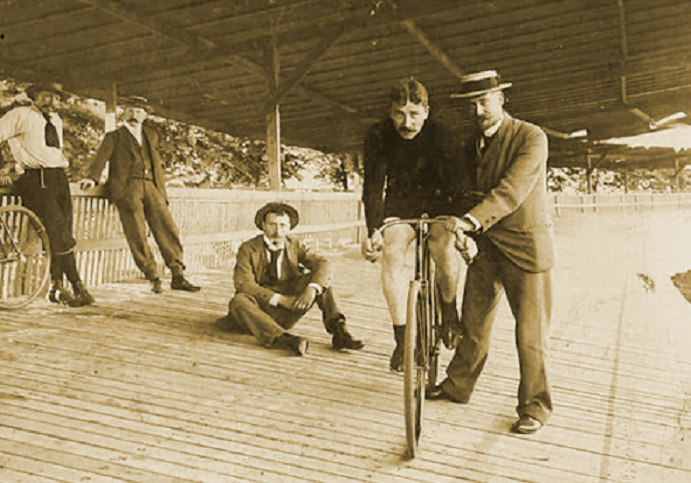 Jaap Eden was very popular with the public and, without knowing it, laid the foundation of our identity as a skating country.

Unfortunately, this success also became Jaap Eden’s downfall. He died at the age of 51, destitute and lonely.

The artist Wineke Gartz explains “In my design for the Jaap Eden commemorative coin, I opted for a simple but powerful image, based on an old drawing of him skating on natural ice. We see Jaap Eden who comes to skate towards us in the manner of a great champion: strong and unyielding, but also calm and self-evident. We see the bent posture of the winner who goes his own way, through storm and struggle, driven by the will to be the best. It even reminds me a bit of the harsh winters of the past.

The scratches in the ice not only give the feeling of a Dutch landscape, but also symbolize the impression that Jaap Eden has left as an athlete. I chose to keep the scratches deeper within the coin. The lines themselves are shiny fond. This gives a strong graphic image on the coin.

His name is on top of the coin. This makes his name an image in itself”. 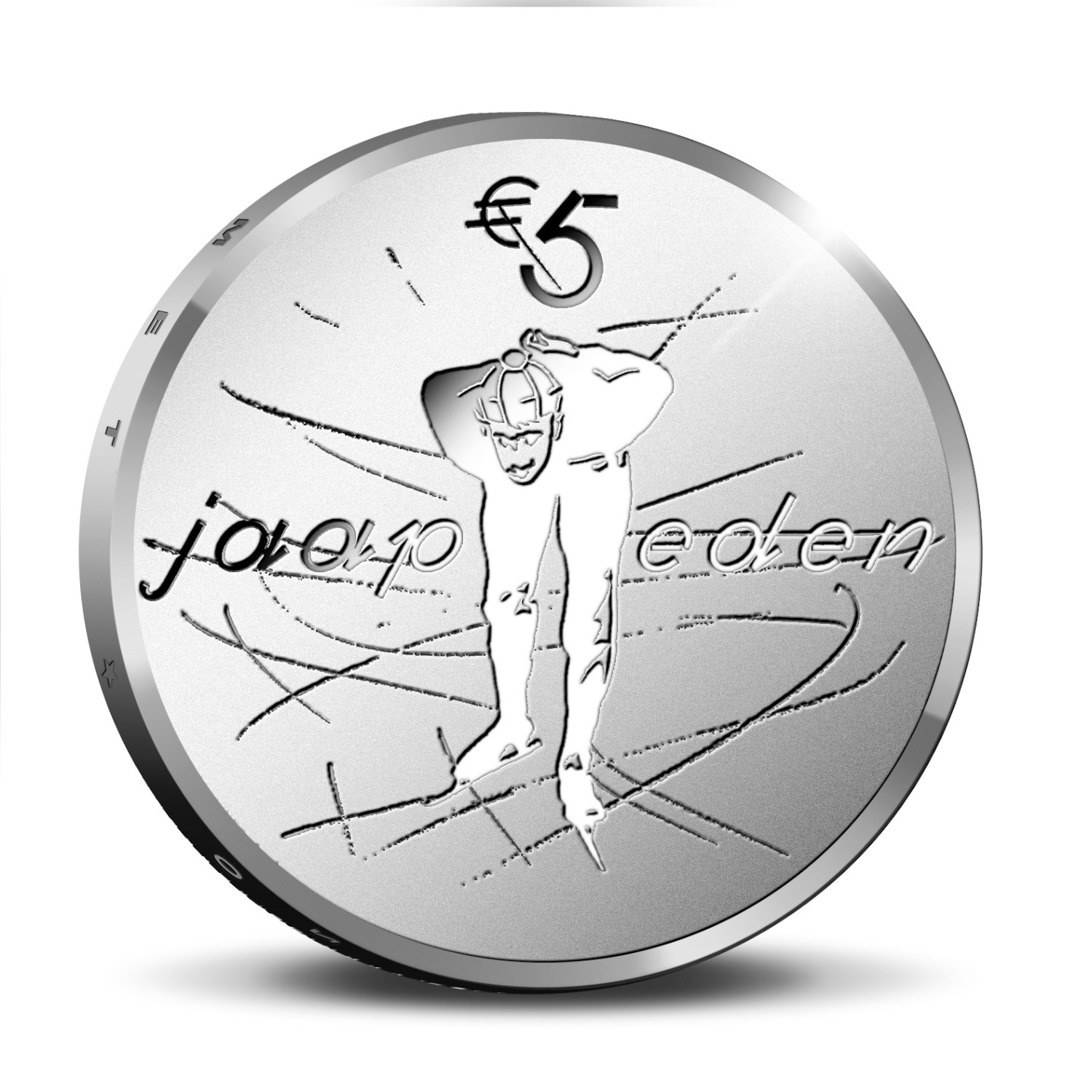 “On the obverse (front side) we see the same scratches, but mirrored. The impact of Jaap Eden literally presses through to the present. The scratches are placed here on the shiny fond, and form a festive, radiant background for King Willem-Alexander. The King is personally very connected with sports in general and skating in particular. He is often present at important competitions and then visibly enjoys the performance of the athletes. And with his participation in the Elfstedentocht many years ago, he is also part of the Dutch skating history.

I have drawn the King based of illustrations where he’s in office. In addition, I searched for a joyful and powerful appearance: the King enjoys himself, but he also exudes confidence and pride. It is as if he is sitting in the stands and looking at Jaap Eden. The King is proud of the past. At the same time, he focuses on the future, symbolized by looking in the direction of the year 2019.

The scratches in the ice connect both skaters (Eden and the King) on opposite sides of the coin, each with their own meaning”. 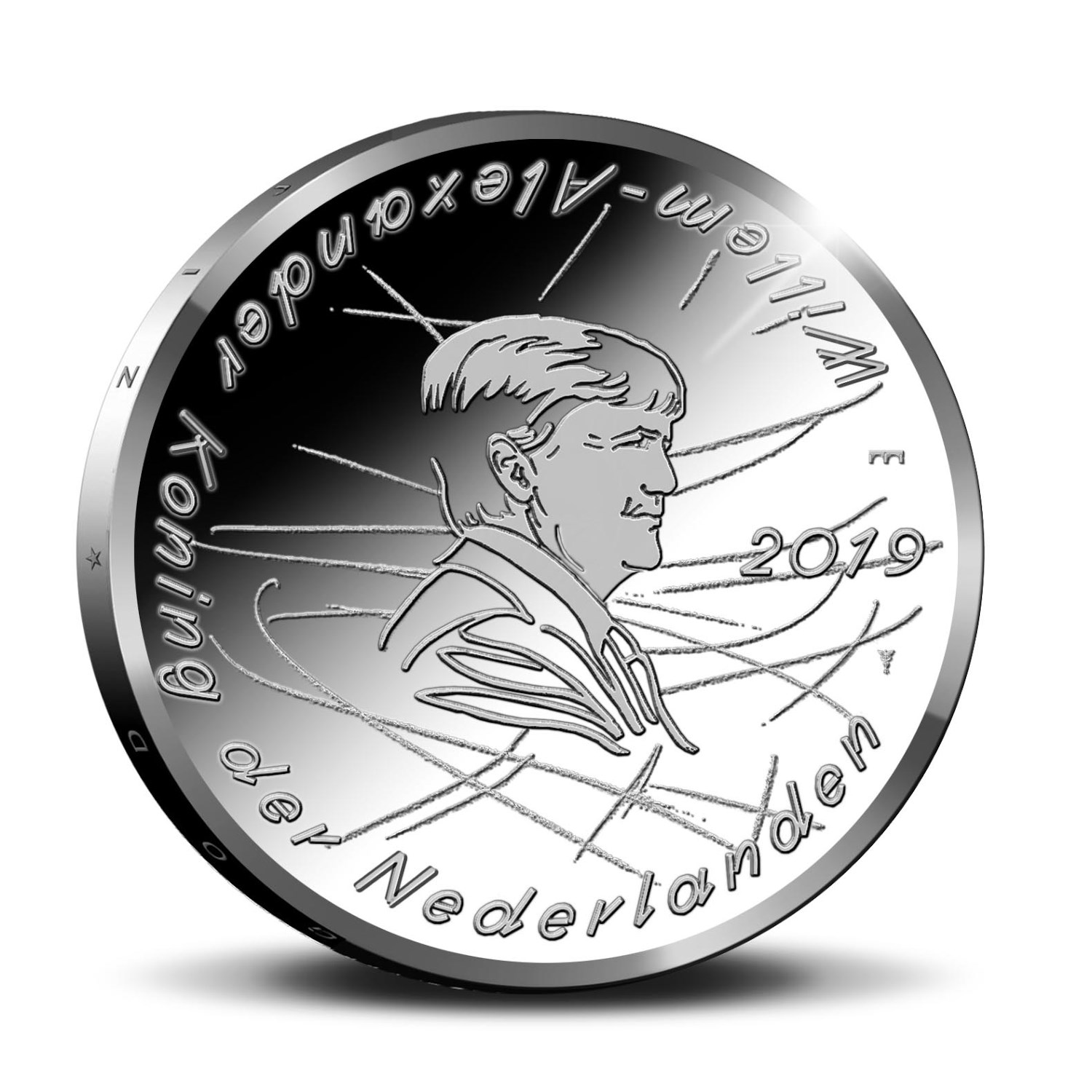 The chosen font LAYUP is by designer Jan Horčik (HG). The round font emphasizes the fun surrounding sports and refers to the character of Jaap Eden as an athlete and bon vivant. It is a very contemporary font that gives the design a fresh, contemporary twist. 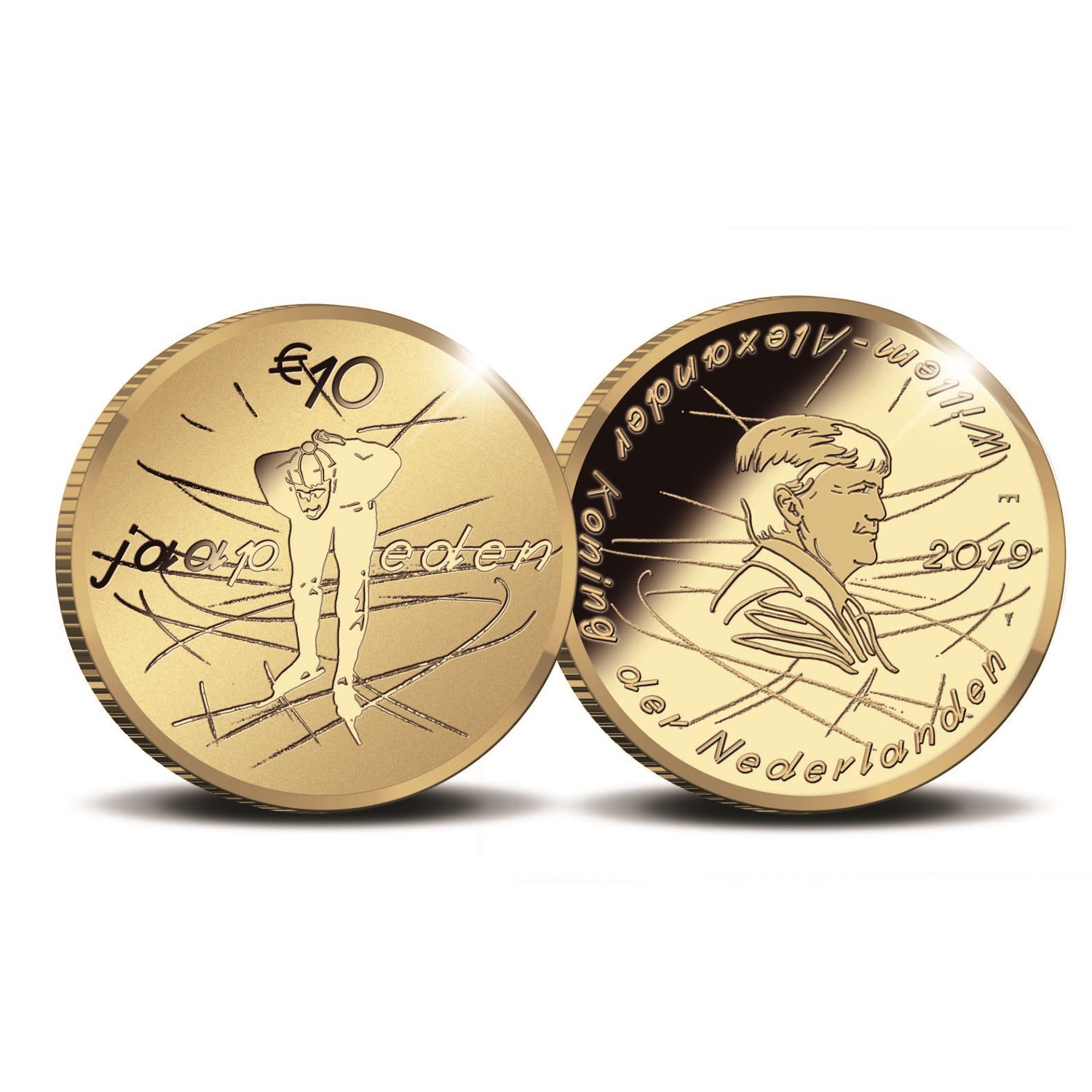 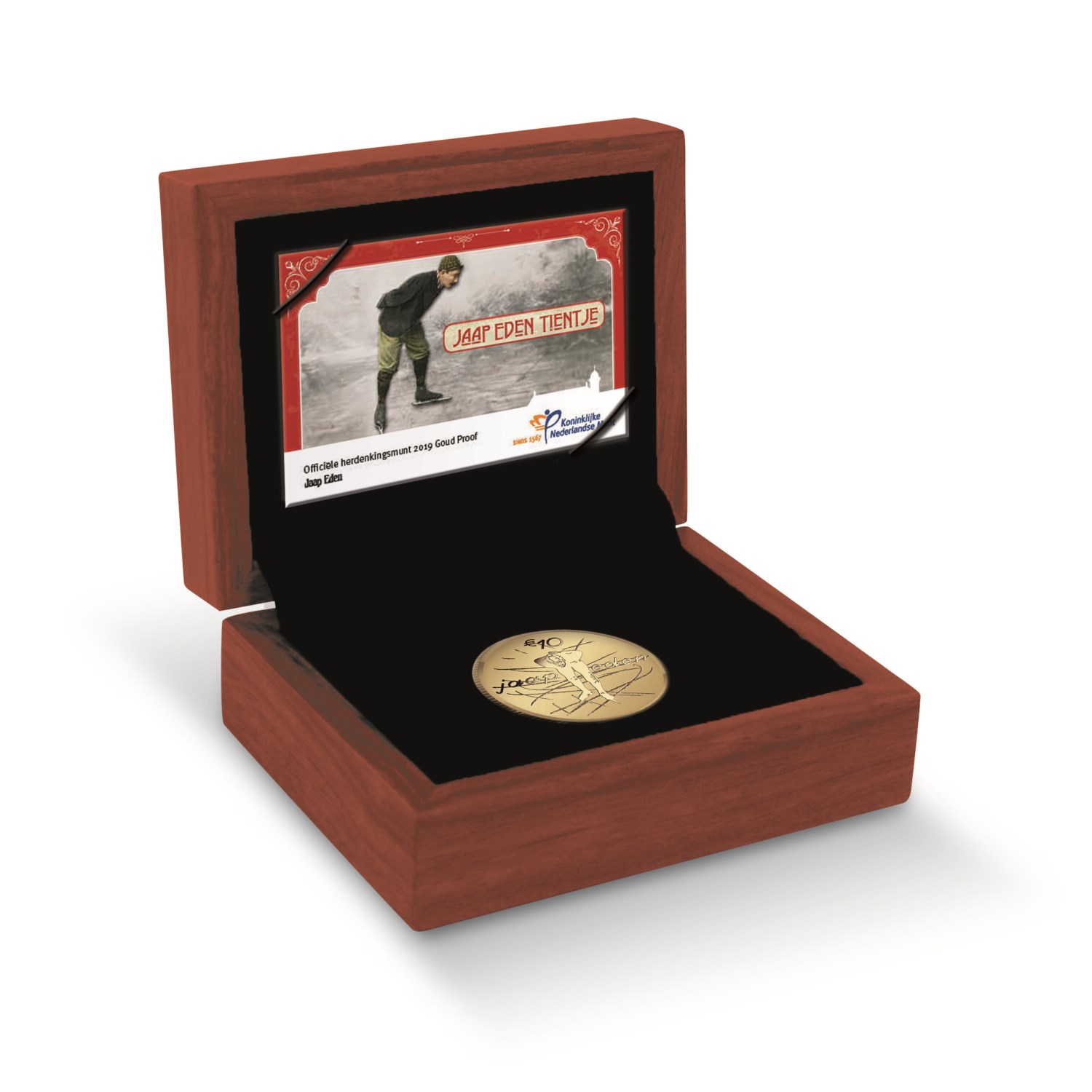 (with 500 coins for commemorative sets) 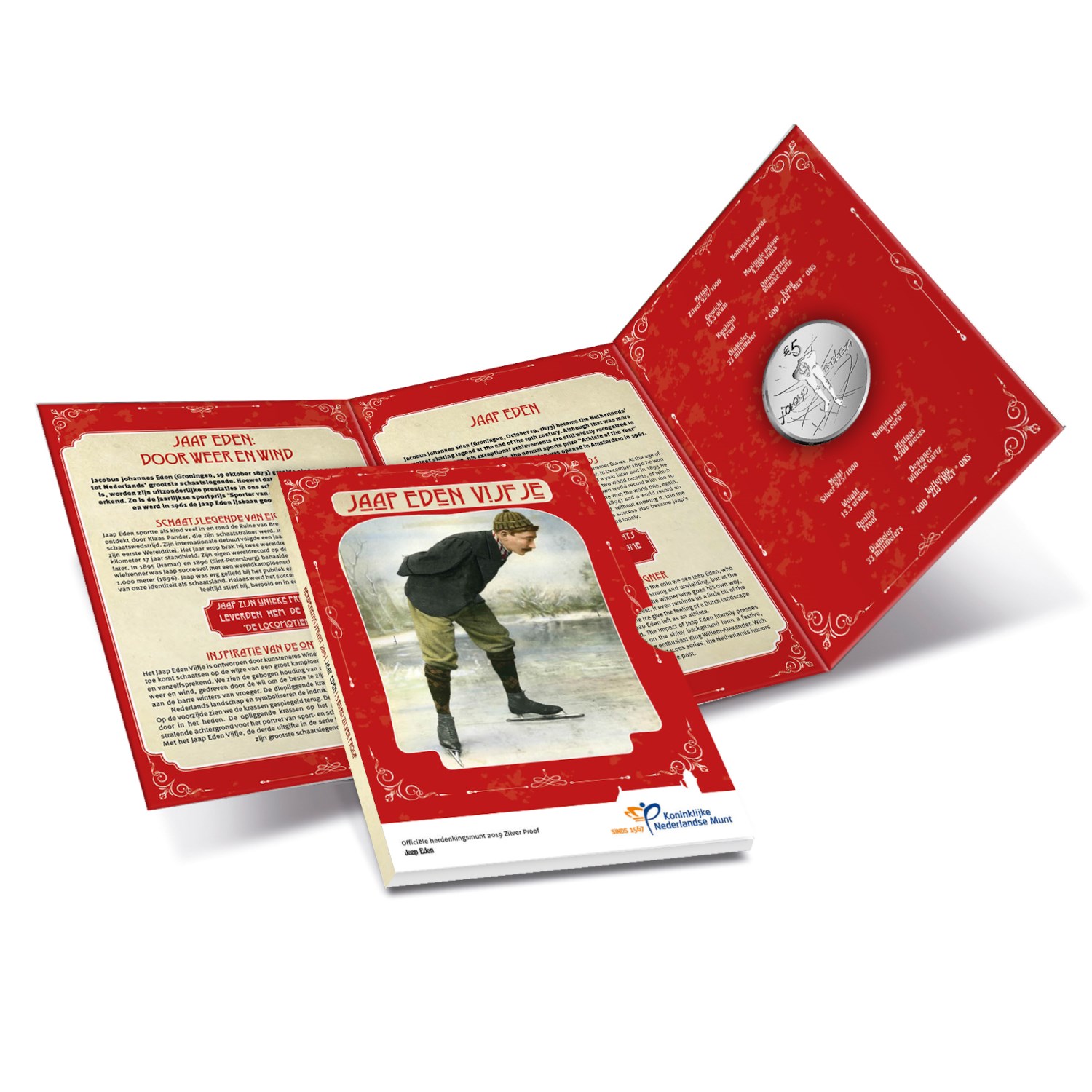 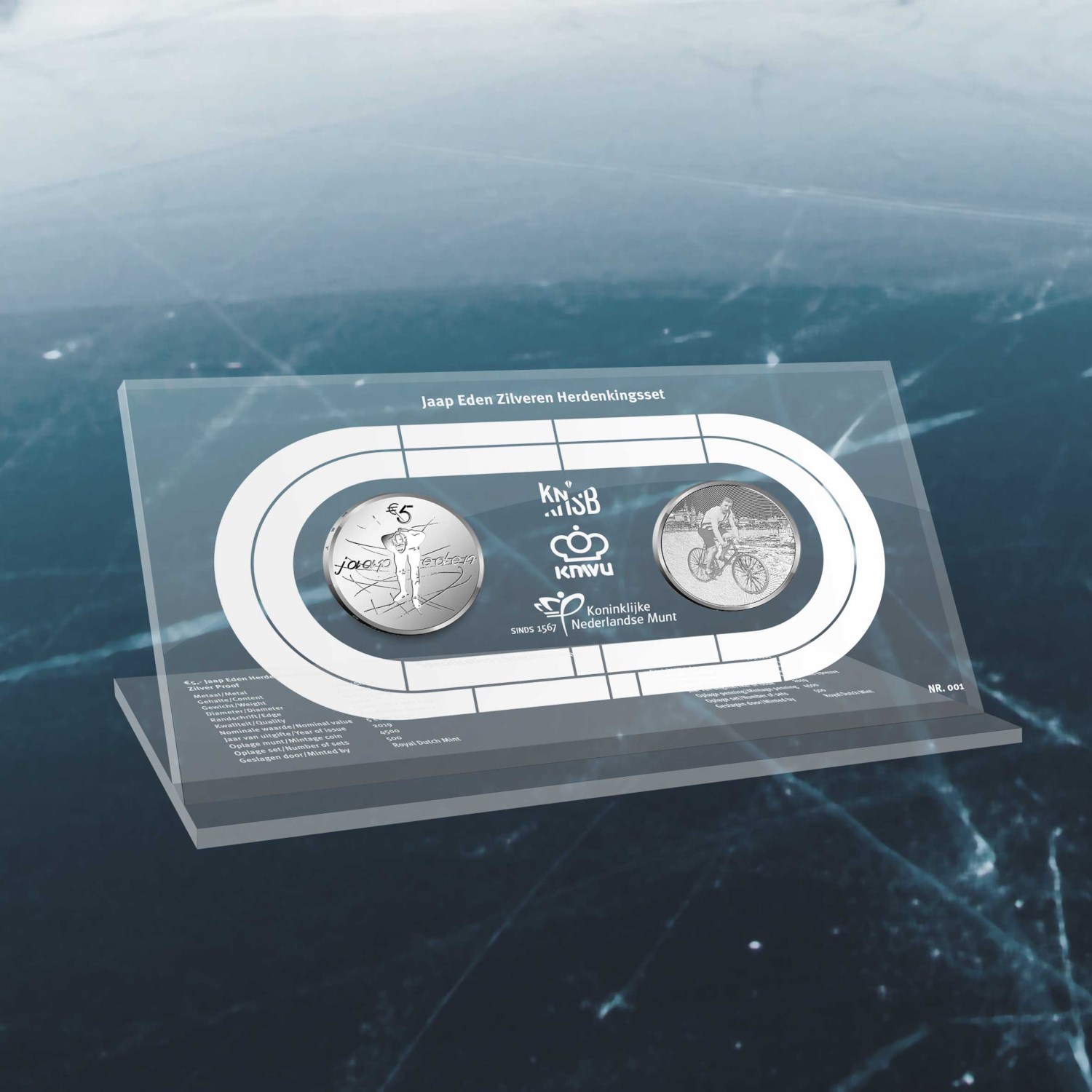 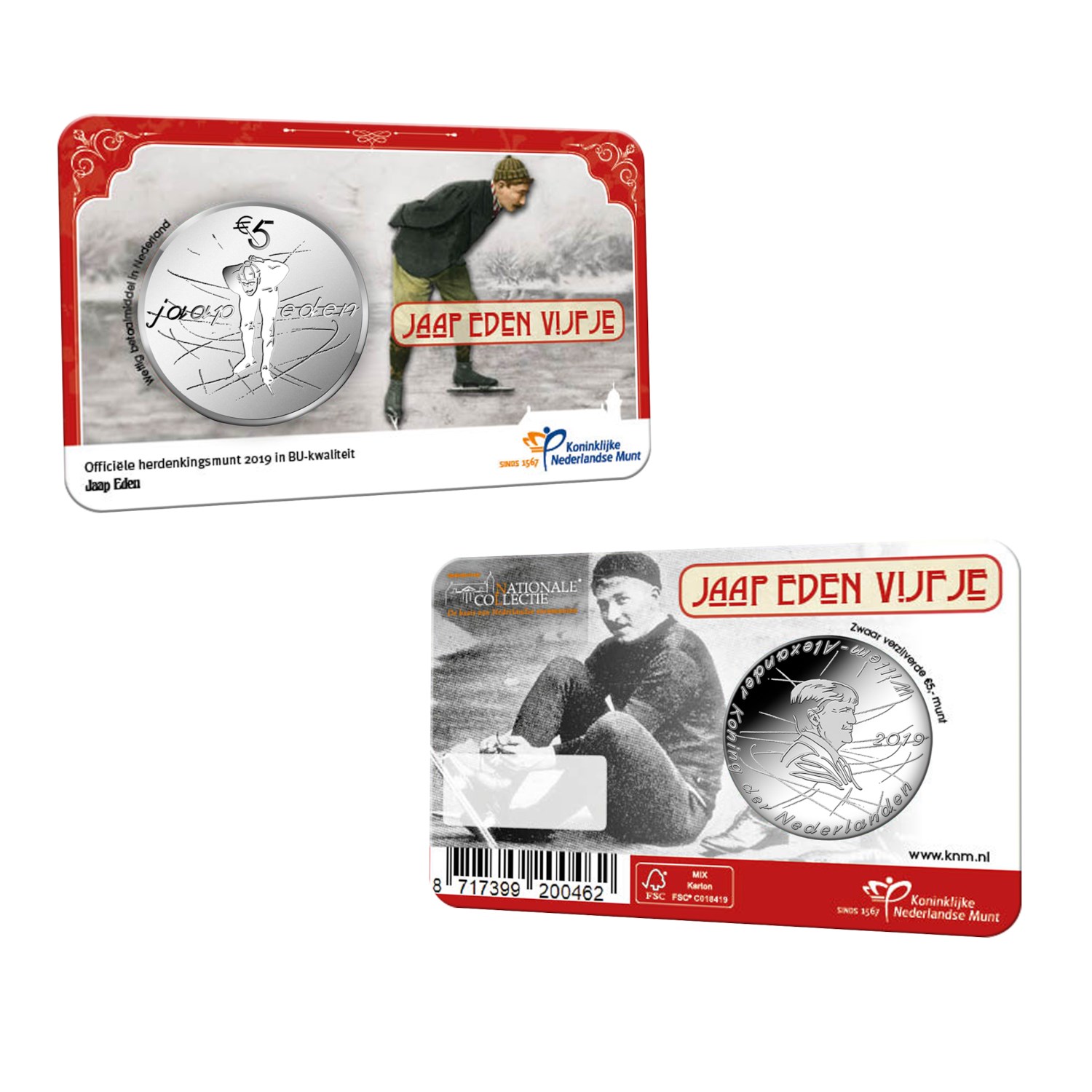 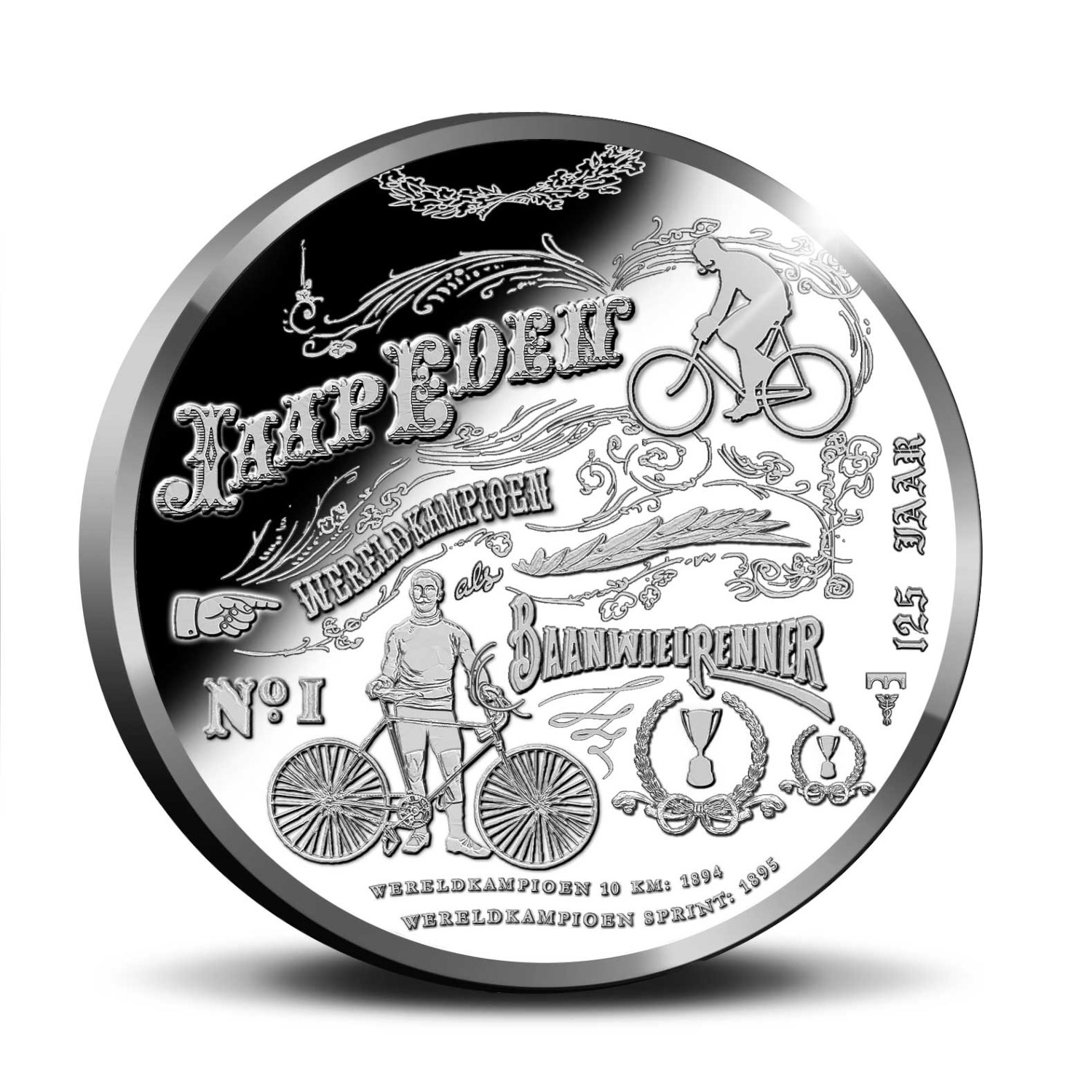 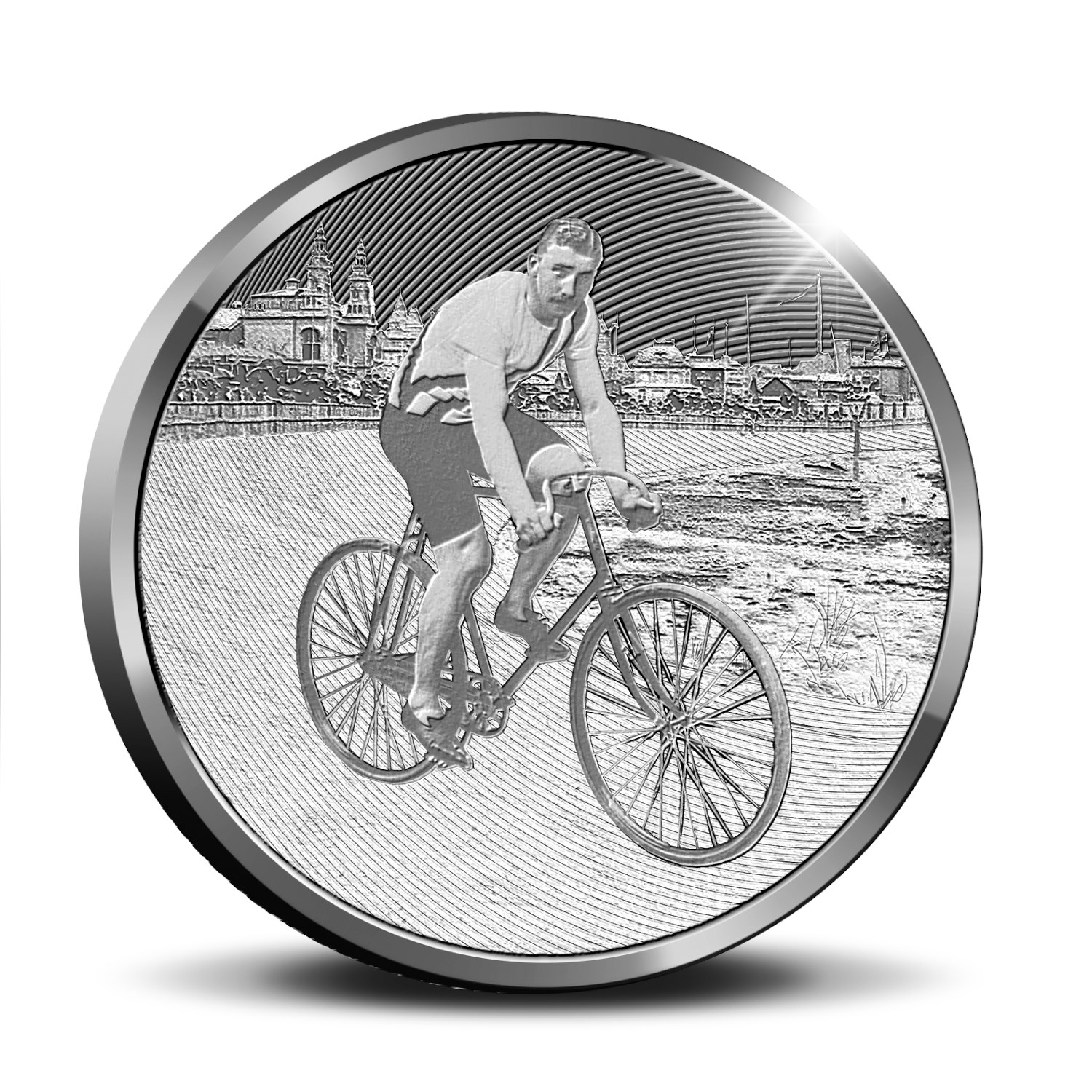 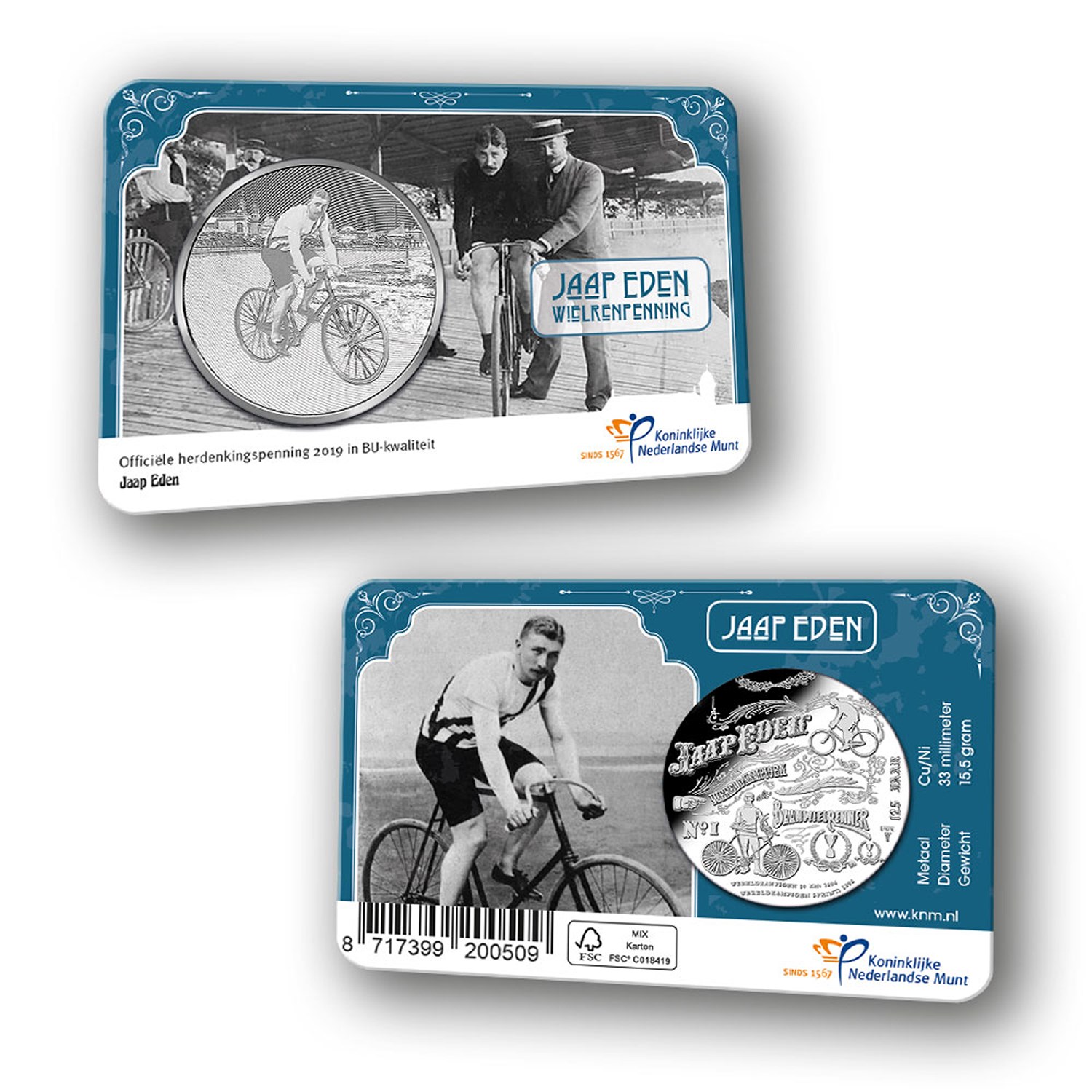