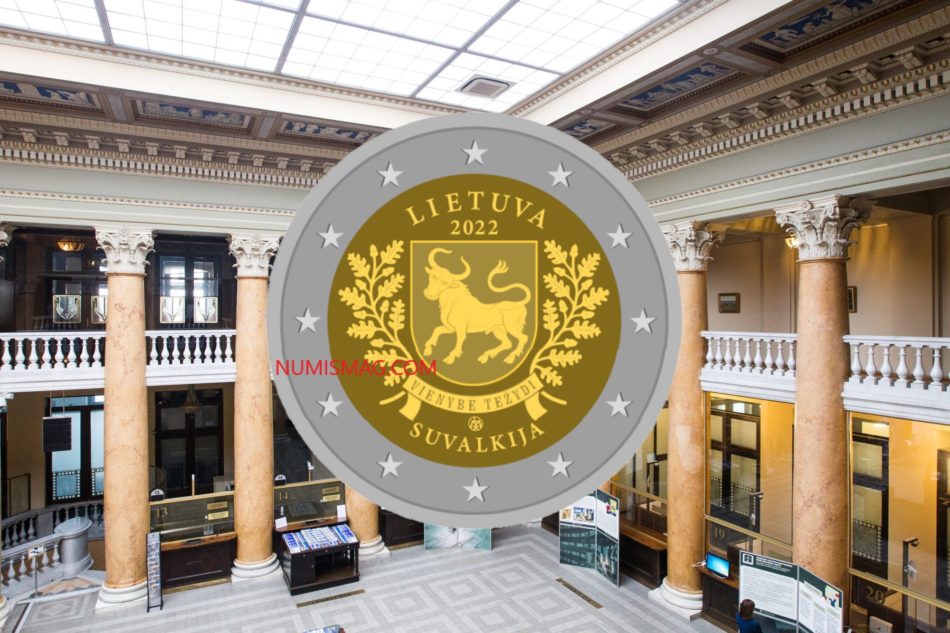 The 2022 Lithuanian €2 commemorative coin “SUVALKIJA” region has been officially announced this summer by the lithuanian central bank. This is the opportunity for NUMISMAG to come back on this coin and to interview its designer, Rolandas RIMKUNAS, about the creation of this coin and its various projects.

This coin is part of the multi-year series dedicated to the regions of Lithuania.

NUMISMAG: ROLANDAS, may you give us some informations concerning the 2021 lithuanian €2 commemorative coin dedicated to Suvalkija?

ROLANDAS RIMKUNAS: The 2 euro coin dedicated to Suvalkija (Sūduva) will be released in 2022 by the bank of Lithuania. It is the fourth coin of the series intended for Lithuanian Ethnographic Regions.

NUMISMAG: May you explain us in a few words the reasons of your graphic choice and the symbolysm of the different elements (coming from lithuanian Heraldry, I guess).

ROLANDAS RIMKUNAS: The coat of arm‘s of Suvalkija region which was approved by decree by the Lithuanian president Gitanas Nausėda in 2021 became the basis of the circulating €2 coin design.

As a domain „Zudua“ (Süduva) was first mentioned in the literature source in XIII century in the book „Liber censuum Daniae” (around the year 1202—1241).

After the third division of Polish-Lithuanian Commonwealth in the year of 1795 Suduva region was allocated to Prussia. Later in 1867-1915 the region became a part of a newly made Suvalkai province of the Tsarist Russia until the German occupation. The city of Suvalkai was the center of the province. Therefore, the region formerly called Suduva acquired another name, Suvalkija(1).

On the national side of 2 euro circulating coin dedicated to Suvalkija (Sudūva) an auroch in the shield is depicted. The shield on both sides is decorated by oak branches with acorns and connected on the bottom with a silver ribbon. The slogan on the ribbon in red says „VIENYBĖ TEŽYDI“. The words chosen for the slogan are the last line of the Lithuanian National anthem. The decision for the chosen slogan was made based on the Lithuanian National anthem‘s author Vincas Kudirka who was born in Suduva. Oak branches symbolise a deep history of the region, dating back to pagan times of Lithuania (2).

In the Baltic mithology oak was the most important tree, growing in most of the sacred places. Ancient Baltic tribes (including Lithuanians) believed that spirits lived in oak forests and especially old and thick oaks were the abodes of gods. The aurochs in heraldry symbolise nobility and magnanimity. The auroch (bos primigenius), now an extinct animal, once was richly widespread in Suduva region. Aurochs were hunted in Lithuanian forests since the Neolitic times (3). 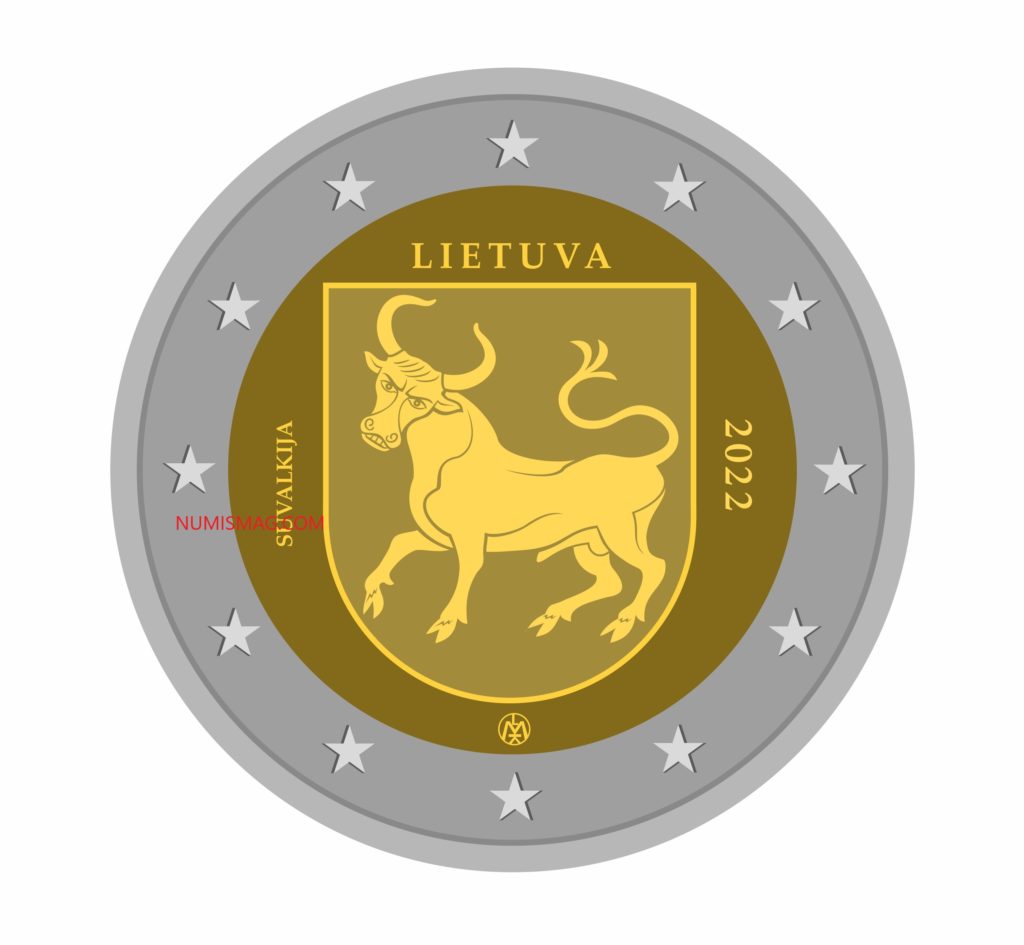 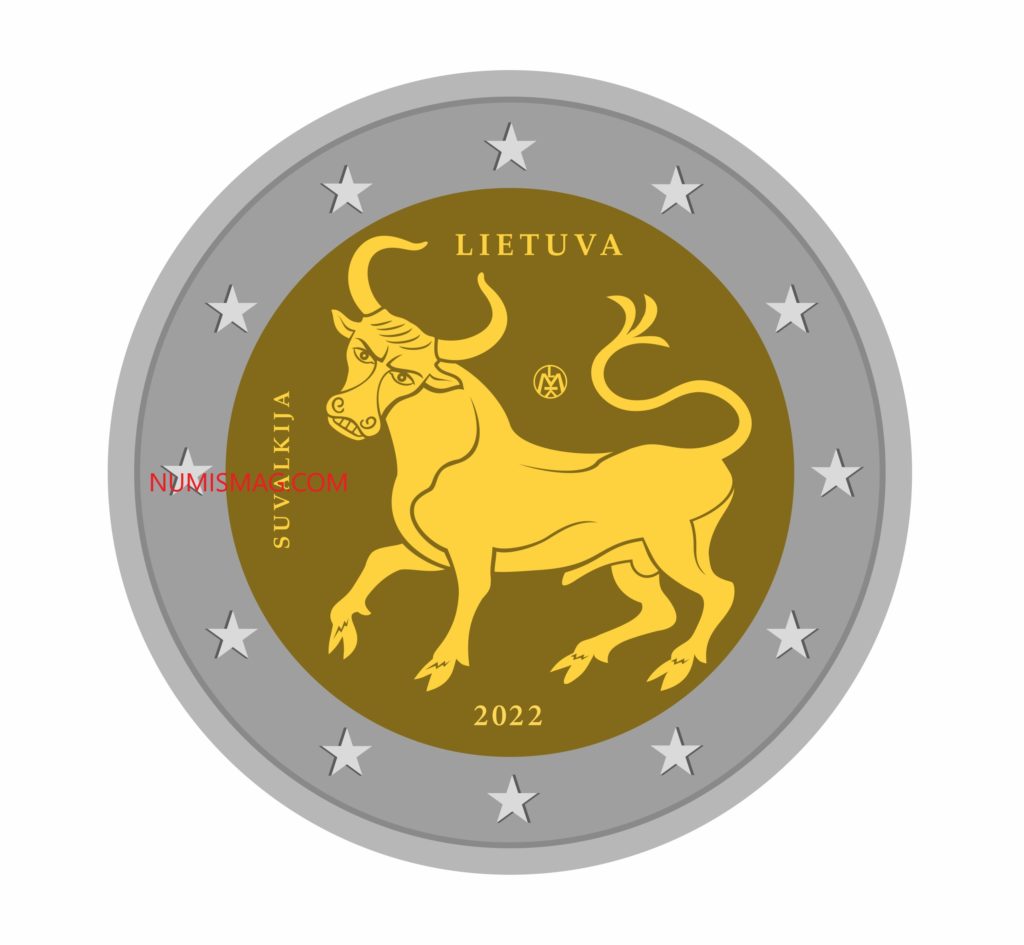 Final project of ROLANDAS, confirmed by Bank of LITHUANIA

Descriptions of Heraldry of the Lithuanian Ethnic Regions of the Lithuanian Heraldry Commission under the President of the Republic: “The coat of arms of Suvalkija (Süduva) (author Agnė Railaité-Bardé) 11 birželio 2021; Vilnius (https://alkas.lt/wp-content/uploads/2021/07/Suduvos-Heraldikos-legenda.pdf).