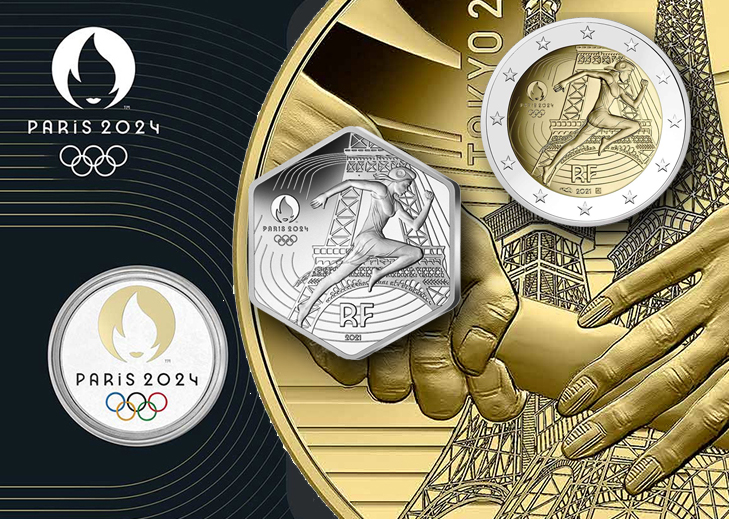 On the occasion of the Paris 2024 Olympic Summer Games, Monnaie de Paris is launching a collection celebrating sport, its values, the athletes but also the heritage of the host country. Olympism and Paralympism are celebrated on this range. The year 2021 officially marks the beginning of the countdown to the Paris Games. It is the handover of the Olympic flag at the closing ceremony of the Games that marks the start of a new era of French Games. This transfer of torch will be honored in this collection.

2021 is also the first year of a quadrilogy where sport and its values will be presented through the collections of coins and medallions. Discover now all the creations of the Monnaie de Paris on the Olympic Games 2024 in Paris.

The face of these coins presents Marianne in full race, overhanging the athletics stadium of the Games. The Eiffel Tower is also featured in the background, symbolizing the city of Paris. This design is also available on the 2€ commemorative coins, available only in proof and BU conditions.

This collector’s coin symbolizes the passing of the baton between Japan and France, two host nations of the Games. We find on the face the passage of baton between a Japanese sportsman and a French sportswoman (that we identify thanks to the decoration of its nails). In background, the tower of Tokyo seems to answer its Parisian consort, the Eiffel Tower. 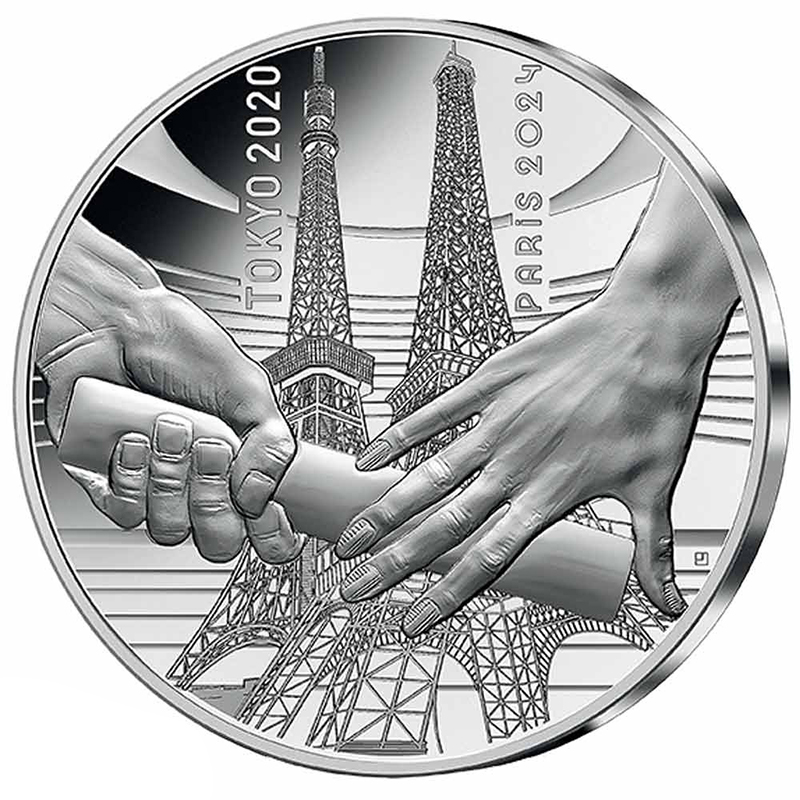 On the reverse, the Japanese and French flags are side by side and the central circle of the Japanese flag moves to the right to become rings, a reference to the Olympic rings. The emblem of PARIS2024 completes this composition. 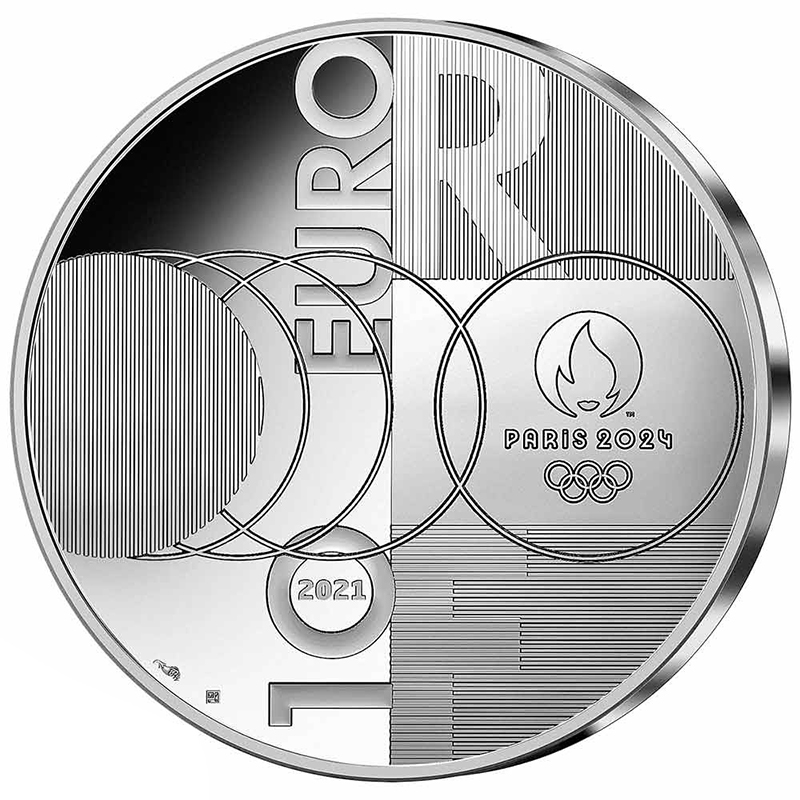 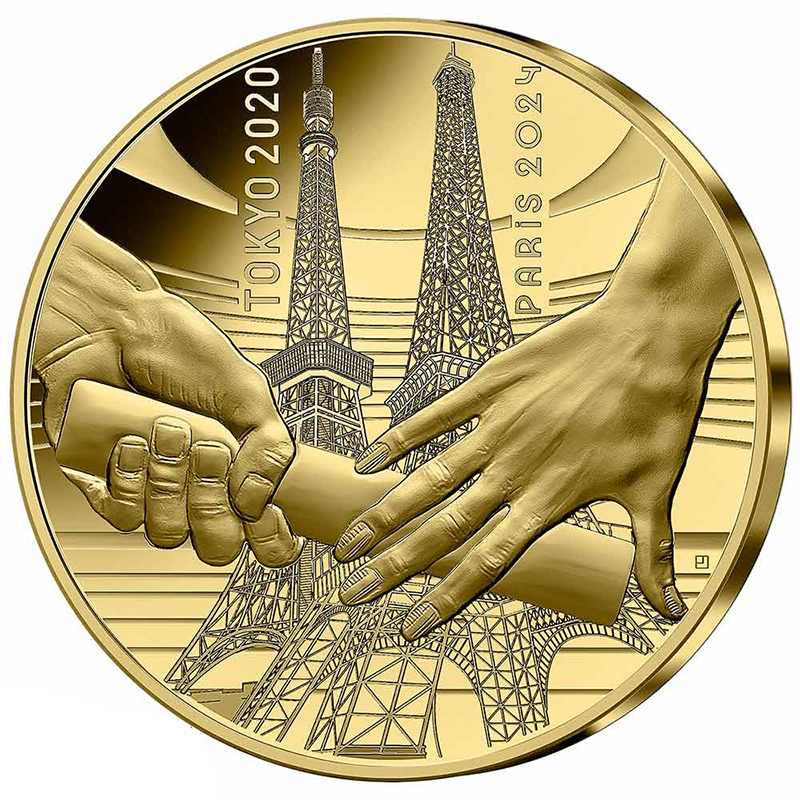 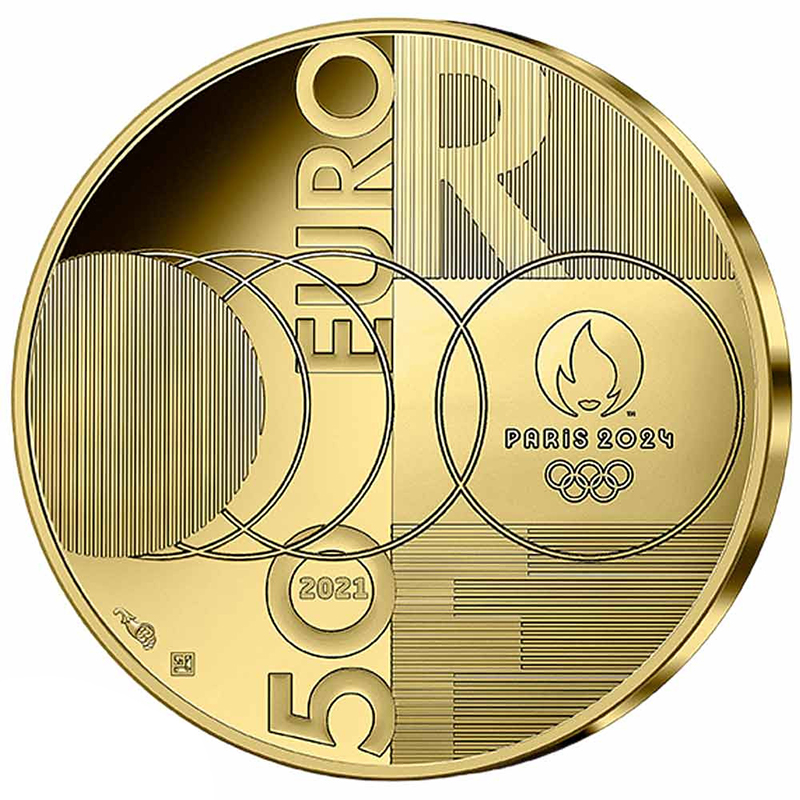 This exclusive blister contains a colored medallion featuring the emblem of the Paris Games.

For the first time, the Olympic and Paralympic Games share the same symbol. This one is itself made of three strong elements: the gold medal for the surpassing of oneself, the flame for the energy of sharing and of course the Marianne, icon of the republic and symbol of France. 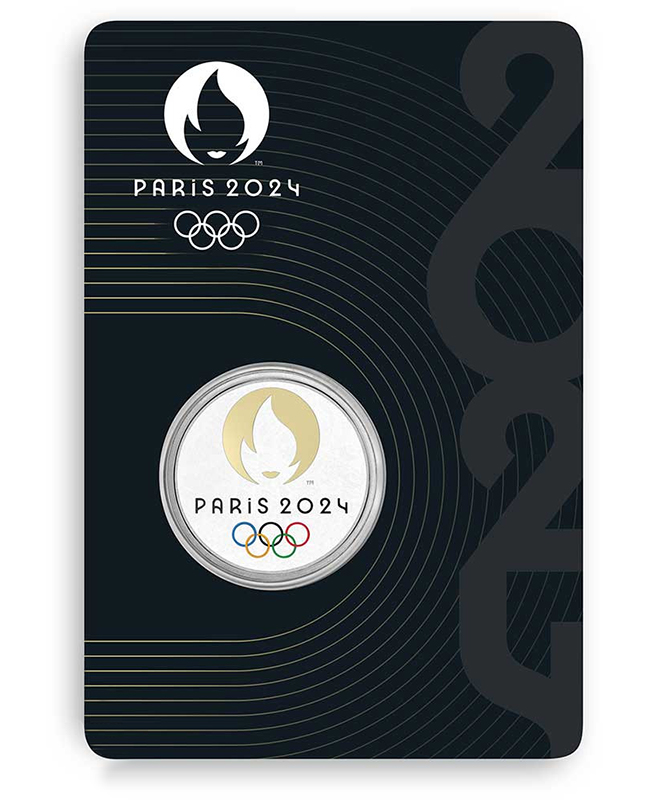 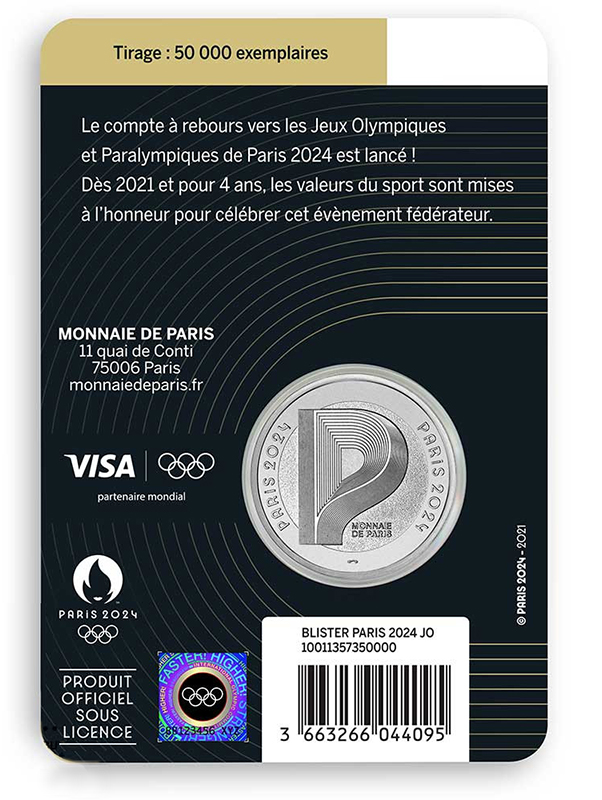 The obverse depicts an athlete in the foreground, the Eiffel Tower and an athletics track in the background, with the logo of the Paris 2024 Olympic Games at the start. Below is the monogram “RF” of the French Republic and below that the year of issue “2021”. On the left, the mark of the mint and on the right, the mark of the general engraver. The twelve stars of the European flag are represented on the outer ring of the coin. 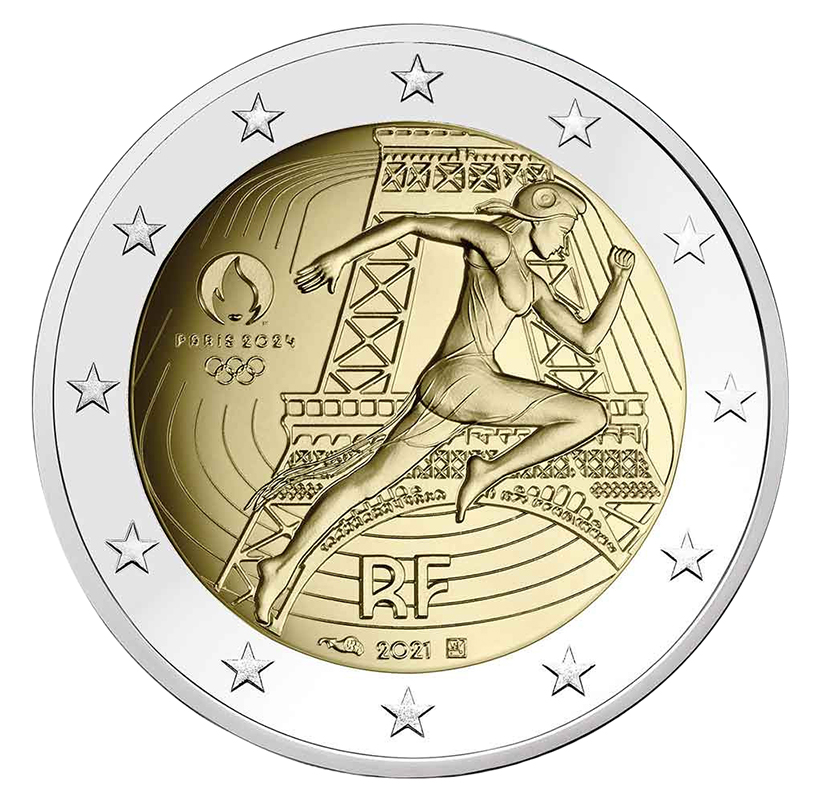 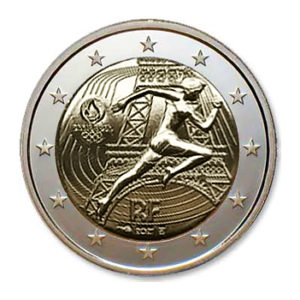 Mintage: 10.000 coins for proof version
No circulation version for this €2 coin

The theme of the first of the four pieces of the series “Summer Olympics Paris 2024” in coincard is “The Olympic flag”. 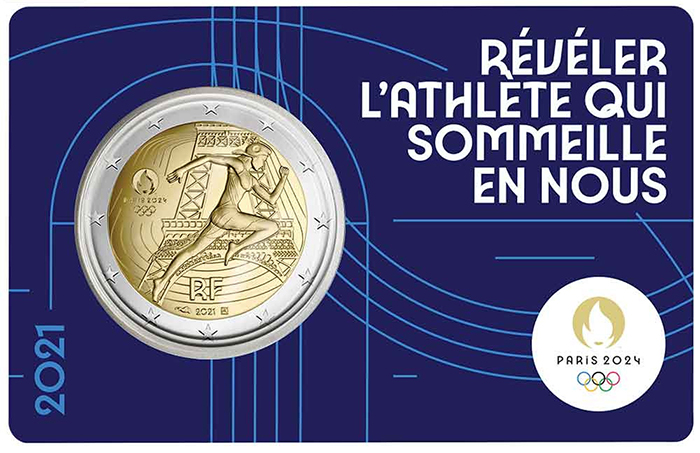 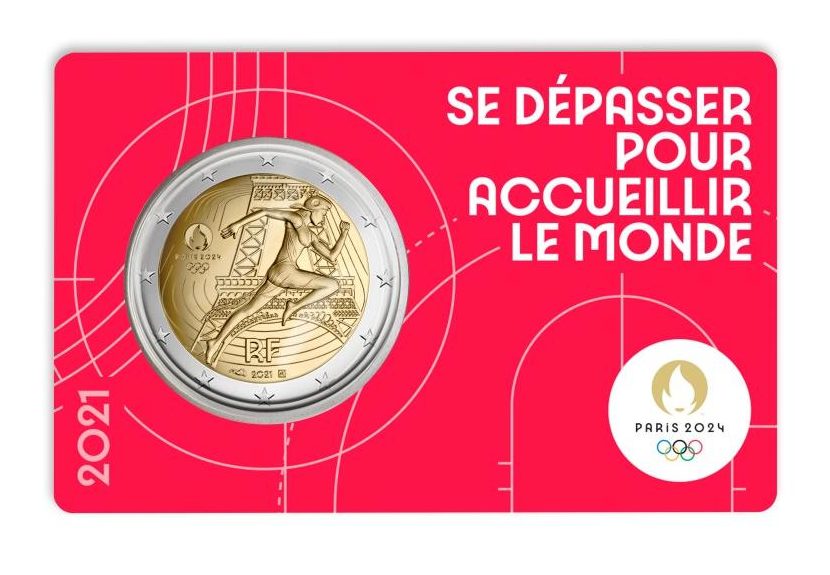 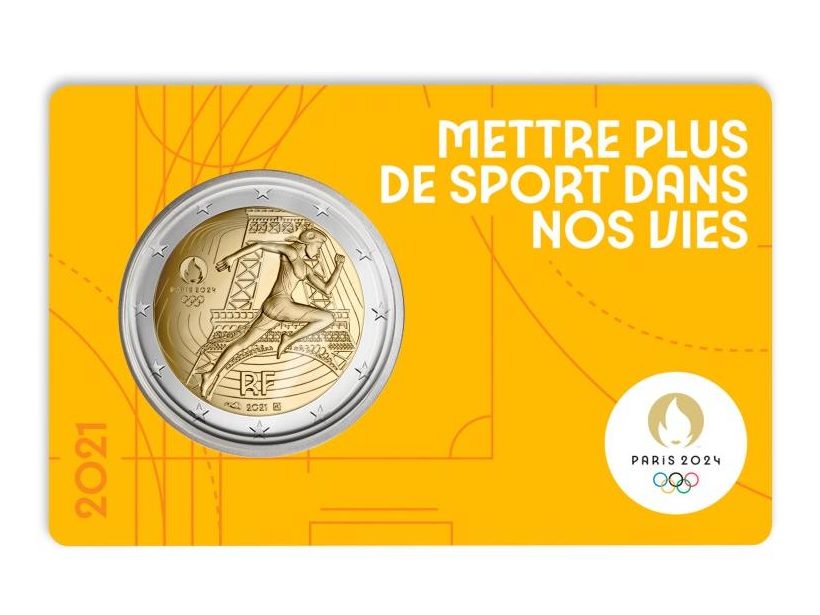 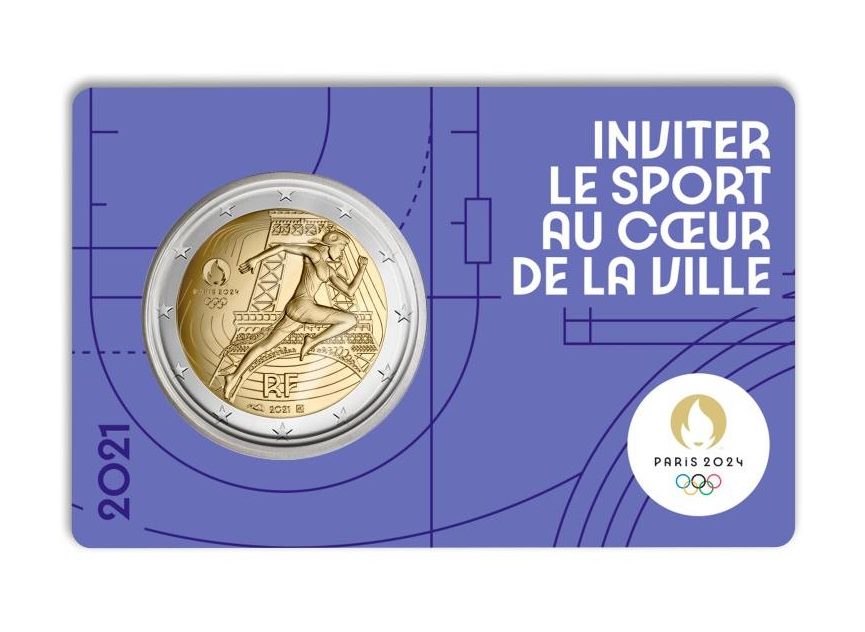 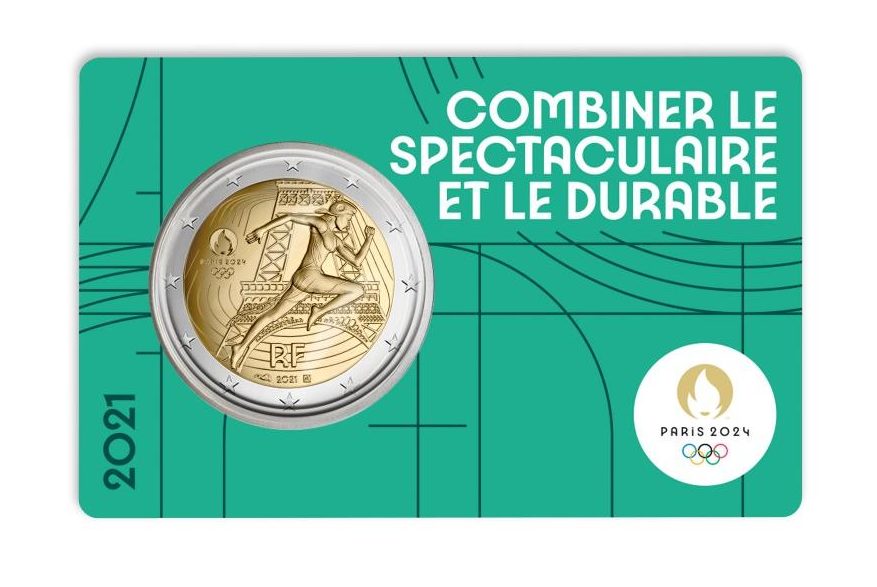