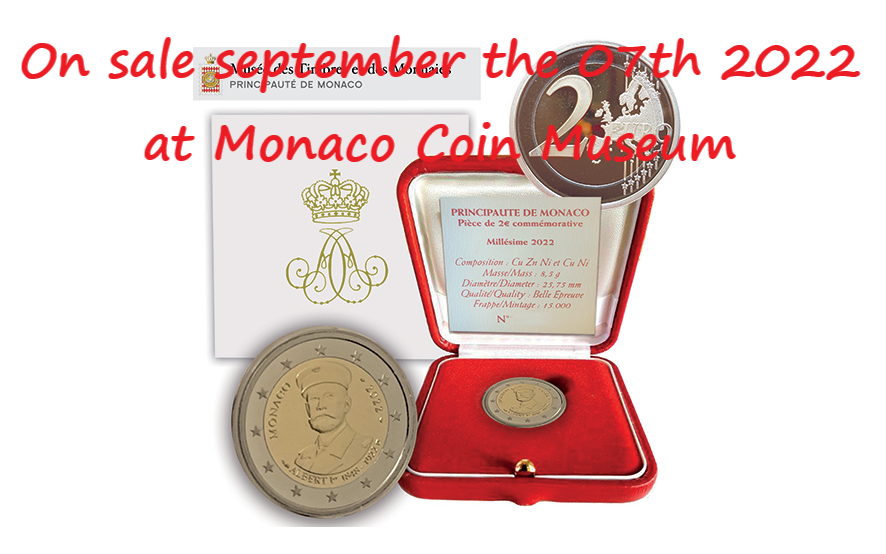 Last update 09/22/2022 – The Principality of Monaco will issue and sale on september 7th 2022 a commemorative coin of €2 with 2022 yearmark commemorating the 100th anniversary of the death of Prince Albert Ist of Monaco. During the commemorations at the beginning of 2022, Prince Albert II recalled the importance of the inner work of his predecessor Prince Albert I in the construction of the Principality of the 20th century. He mentioned in particular the creation of the hospital, the port and the high school. Albert II also visited the municipal library, now called “Prince Albert I”. He unveiled a large photographic portrait of his great-great-grandfather, who had also founded the municipal library and refurbished the library of the Princely Palace.

He also pointed out that yesterday’s issues often intersect with today’s and tomorrow’s challenges, calling for the legacy of Prince Albert I to be constantly revitalized and made our own, based on the requirements of the rule of law and the continuous adaptation to the changes in the world.

The mintage is 15,000 coins in proof condition and was on sale september 7th 2022 from 10AM on the e-shop of Monaco Coin Museum.

All coins were sold out before the end of the day. 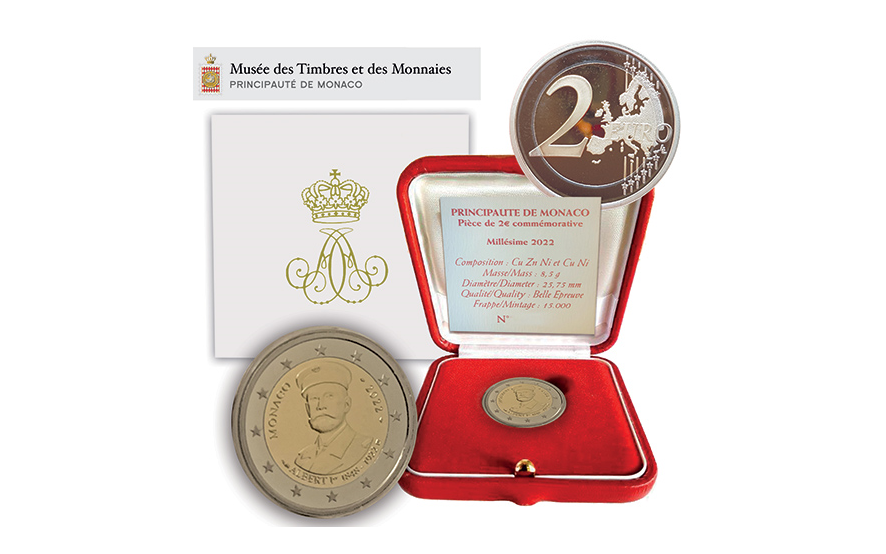 This highly sought-after coin is now available for pre-sale at over €500. For the record, the coin will be sold in principle around €120 by the Monaco Coin Museum (+ shipping costs). Currently, the coin is worth about €600 on the coin collector’s market. 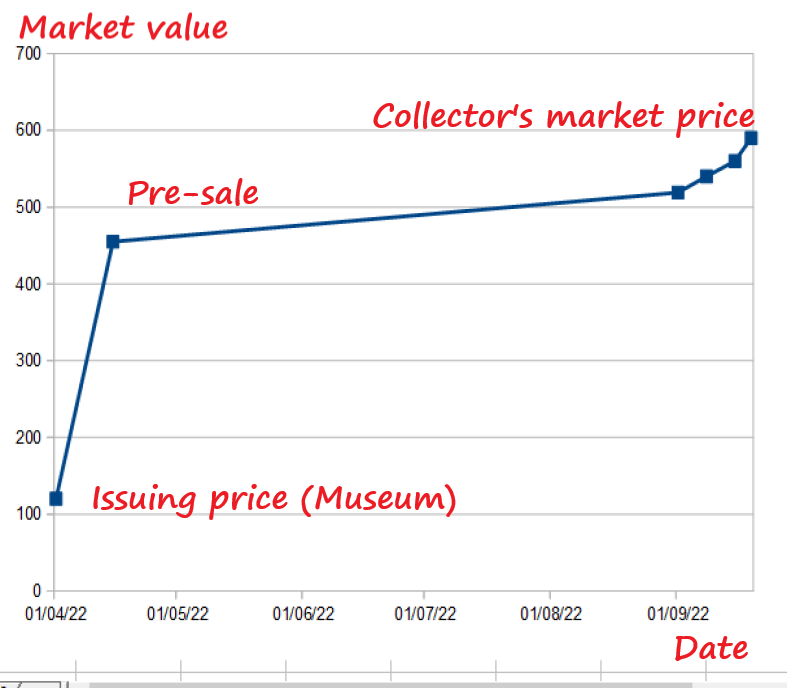 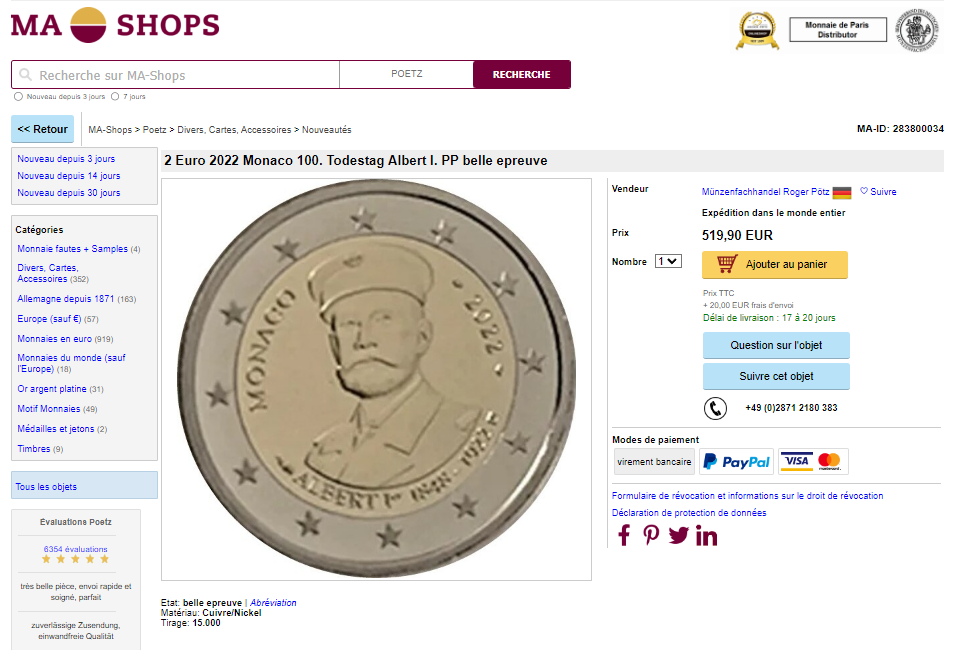 Pre-sale of a german coin dealer

BIOGRAPHY OF ALBERT the Ist 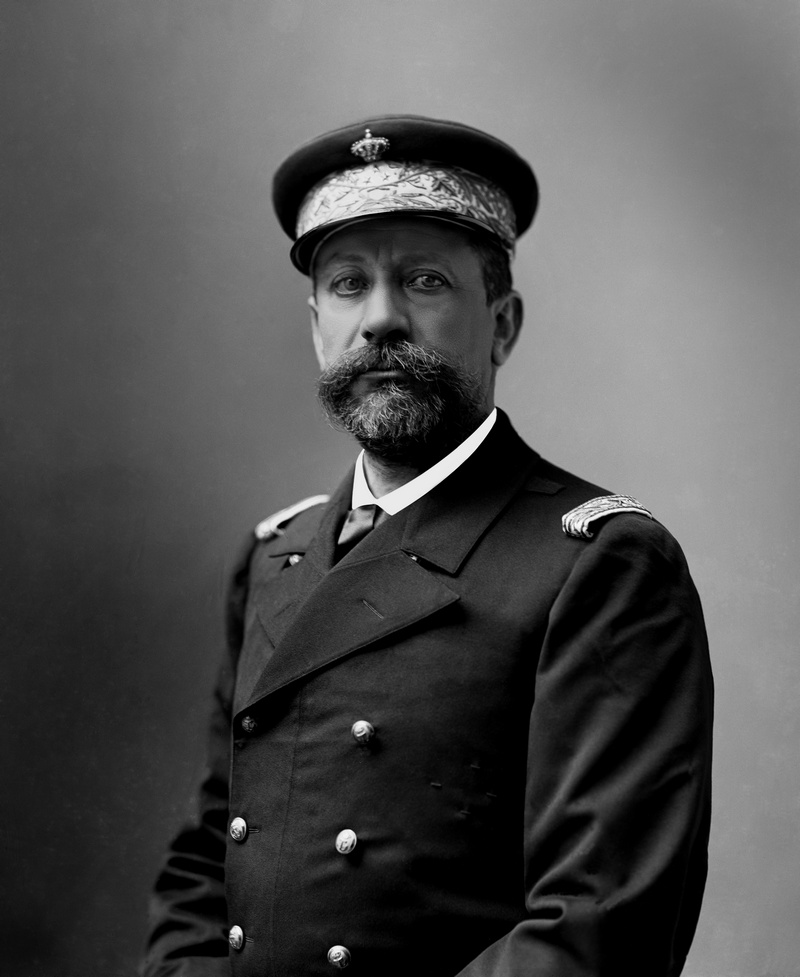 Prince Albert begins his training to become an officer in the Imperial French Navy in Lorient.

Prince Albert purchases a small cutter. He names it the “Isabelle II” and sails it along the French and Italian coasts.

In England, the Prince purchases a schooner built in 1862 by Camper & Nicholsons, and changes its name from Pleiad to “Hirondelle” (swallow).

This allows him to indulge his love of travel and become an increasingly experienced sailor.

Hereditary Prince Albert of Monaco, now in his thirties, arrives in Madeira for the first time on 28 February 1879, on board his schooner, the first “Hirondelle”, aboard which he spent five years sailing the Mediterranean for his own enjoyment. During the few days he spent mixing in high society, he met Alice Heine (1857–1925), who had been married to the Marquis of Jumilhac since 1875.

The original “Hirondelle” completes its first scientific expedition (stations 1 to 37).

During the Universal Exposition in Paris, the Principality of Monaco used its pavilion to present the collections acquired by Prince Albert on board the “Hirondelle”, as well as the equipment used and the publications detailing the results of the expedition.

Monegasques swore an oath of loyalty to Prince Albert I in the Royal Courtyard of the Palace.

Dreyfus Affair: In his correspondence with his friend Flore Singer, a Parisian salon host, Prince Albert showed himself to be sympathetic to Dreyfus from the outset of the Dreyfus Affair.

Starting in 1898, the Prince regularly attended Kiel Week (held since 1892) though he did not take part in the regattas, for which his yacht was not designed.

In response to Zola’s “J’Accuse” letter, he wrote to the author: “Your statement contains the most wonderful sentiments that a soul could express. It honours humanity, it adds a ray of light to the glory of France. For all those who admire independence and sincerity in patriotism, you have risen higher than the renown of your talent.”

“The Career of a Sailor”, a collection of autobiographical accounts, was published as a book for the first time.

Context: This expedition illustrates the Prince’s fascination with the Arctic: “The challenges and the joys experienced in these regions improve a cultured man when he discovers all the treasures they hold. You are certain to retain, for the rest of your life, something of the heightened sensations that moved us so deeply.” Letter from Prince Albert I to Dr Ferdinand Louët, 15 October 1906. Paris Coll. part.

nauguration of the Oceanographic Museum of Monaco.

Launch of the first tourist rally, known as the “Rallye Automobile”, organised by the Sport Automobile et Vélocipédique society, chaired by M. A. Noghès.

H.S.H. Prince Albert made available to the French Government, the Oceanographic Institute and the Institute of Human Palaeontology in Paris as well as the use of wireless telegraphy on board his yacht, the “Hirondelle”. He gave the Prefect of Seine a sum of 50,000 francs for the families in need of soldiers who had been called to serve, and offered the French Red Cross use of his Château de Marchais property and the hospital in Monaco.

The series of 28 scientific expeditions organised and led by Prince Albert came to an end. During the course of these expeditions, 3,698 oceanographic stations were established with the help of several dozen pieces of equipment, most of which were created or improved by the Prince and his colleagues.

Official opening of the Institute of Human Palaeontology in Paris (the Institute was established in 1910 and the building was constructed by Emmanuel Pontremoli and Constant Roux between 1911 and 1914, rue René Panhard). The opening was attended by President Alexandre Millerand, Minister of Public Education André Honnorat and several leading figures from academia.

Prince Albert gave his Speech on the Ocean before the National Academy of Sciences at the United States National Museum Auditorium de Washington, D.C.

Prince Albert I died in Paris on Monday 26 June of an intestinal obstruction.