On October 13th and 14th 2022, MDC MONACO auction house offers for sale a unique proof cameo set of coins dating from 1889, presented in a box issued on the occasion of the Universal Exhibition of 1889 held in Paris.

The Paris  Universal Exhibition of 1889 was the tenth event of its kind organized in the world. It was held from May 5th to October 31th 1889. It was organized around the theme of the French Revolution, as part of the 100th anniversary of this event. The Eiffel Tower was built for this event. The purpose of the exhibition was to introduce the world to French creative and industrial genius.

This is why the Monnaie de Paris had installed coin presses on the site reserved for it. In addition to the medals dedicated to this event, the legend was until very recently that the few known coins struck on proof blanks with the yearmark 1889 had also been struck during the World’s Fair. “The latest research on this subject suggests that these coins were struck in the parisian establishment of the Monnaie de Paris (editor’s note: the french Mint), Quai CONTI” says Stephan SOMBART, numismatic expert of the  MDC MONACO auction house for a little over 2 years. 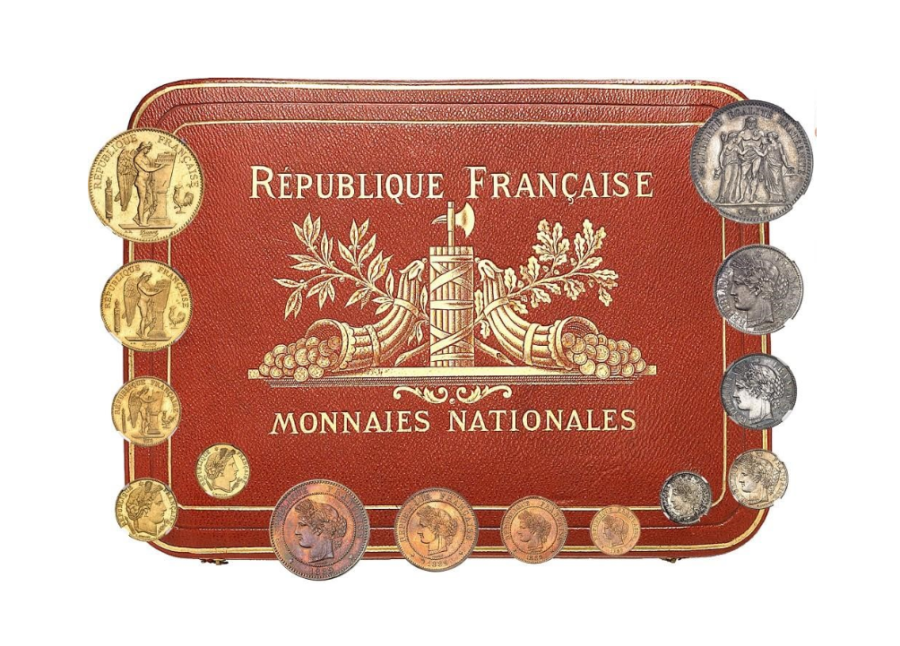 He adds, “These coins are neither trials nor tribute coins intended to be given to distinguished guests of the Fair. It is clear that these coins were sold during the exhibition. It is estimated that 10 complete sets were sold as well as a number of individual coins. The rarest coin is the silver 5 franc coin that the author E. DEWAMIN estimates to have been struck in about twenty copies. The archives relating to this coin issue having disappeared, it is difficult to advance figures for the other face values. Moreover, it is more than likely that most of these sets have been broken up over time, so that this complete set constitutes a rarity already from this fact alone”.

It is thus a unique set which is proposed during the sale with coins of exceptional strike and conservation qualities.

Stephan SOMBART adds “This box was part of the collection of a wealthy amateur established outside Europe. We have not been able to retrace the path of this box before its acquisition by its last owner, our client. In any case, he kept it for a very long time in his collection. Considering the price of the set as a whole at 205 800€, it is very likely that it will join the collection of another wealthy collector in the United States or in Asia. French 19th century coins of high quality are indeed very appreciated in China and Japan. This interest in the land of the rising sun for late 19th century French numismatics is due to the success of a numismatic book translated into Japanese and dealing with French numismatics under Napoleon III reign”.

The set consists of the following currency denominations: 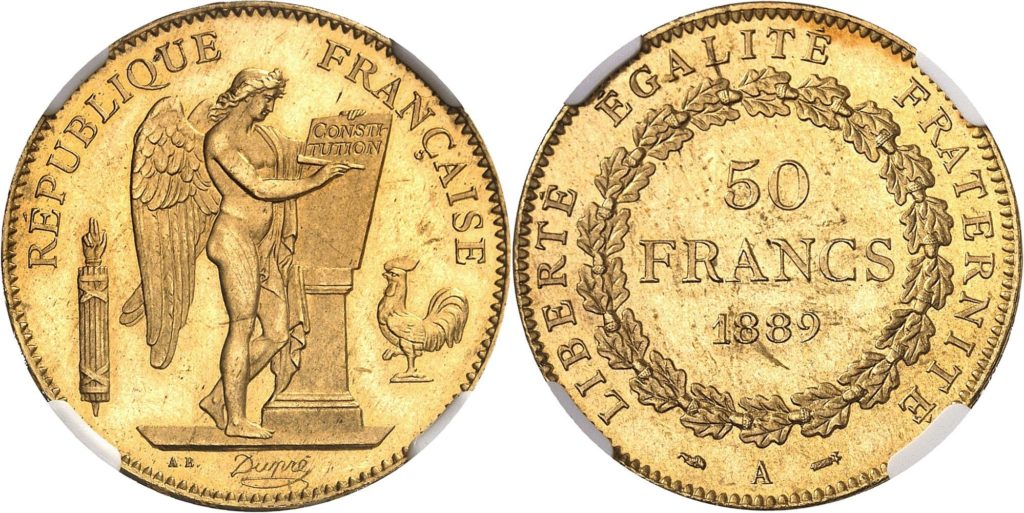 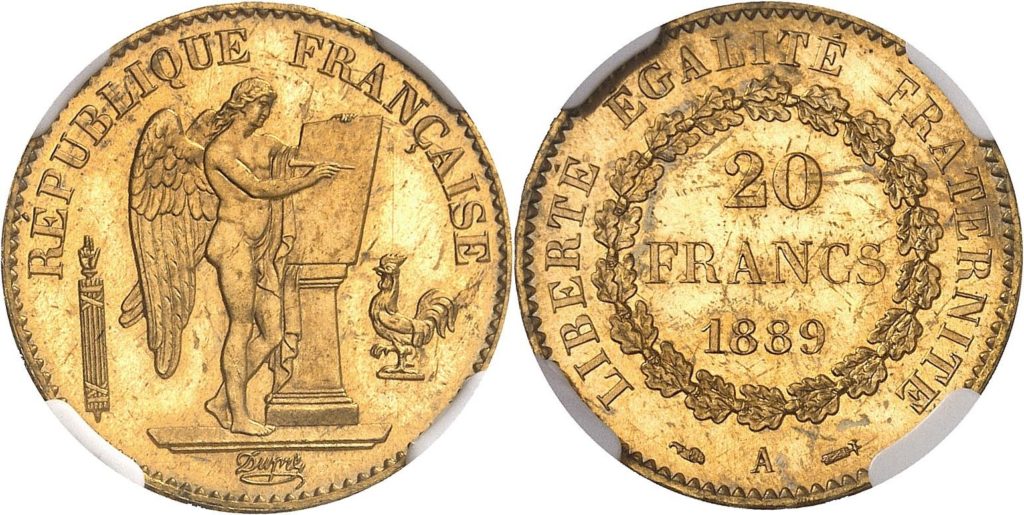 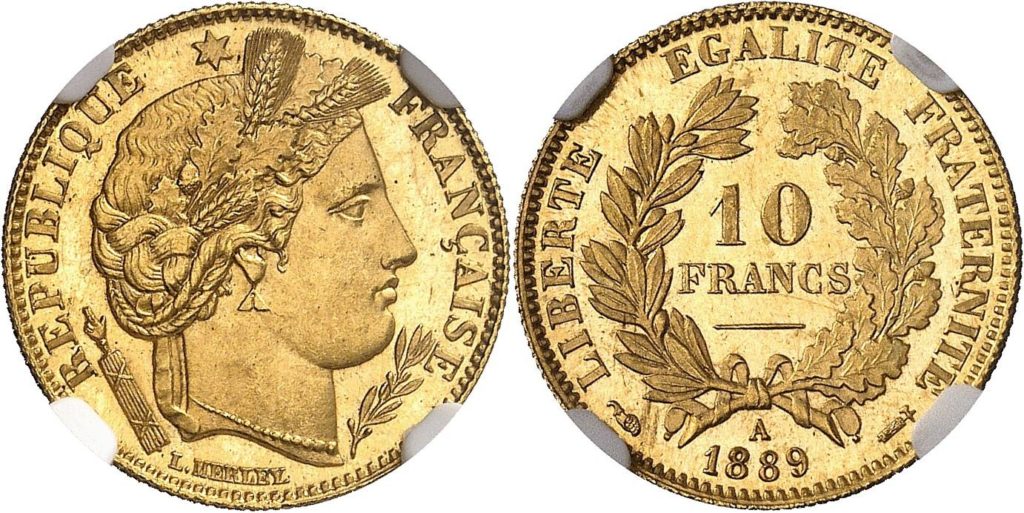 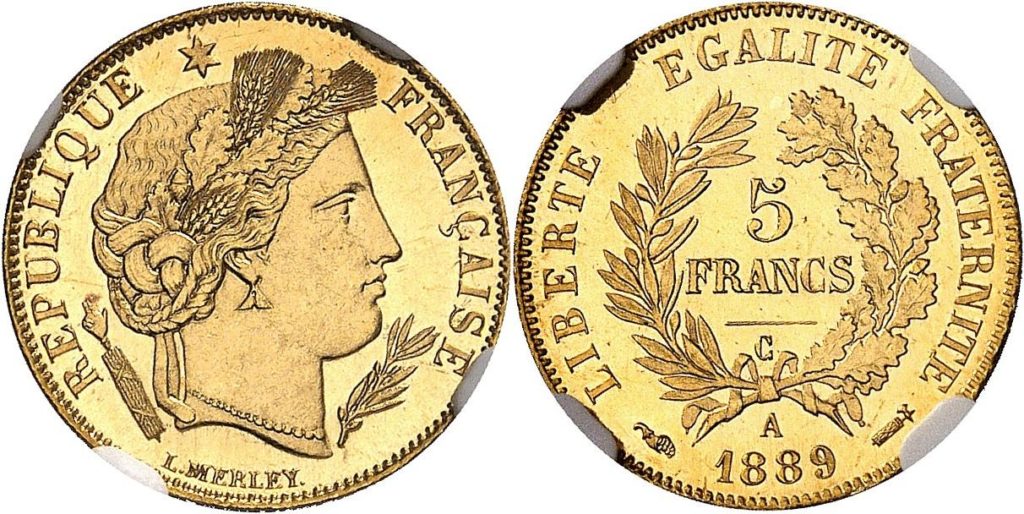 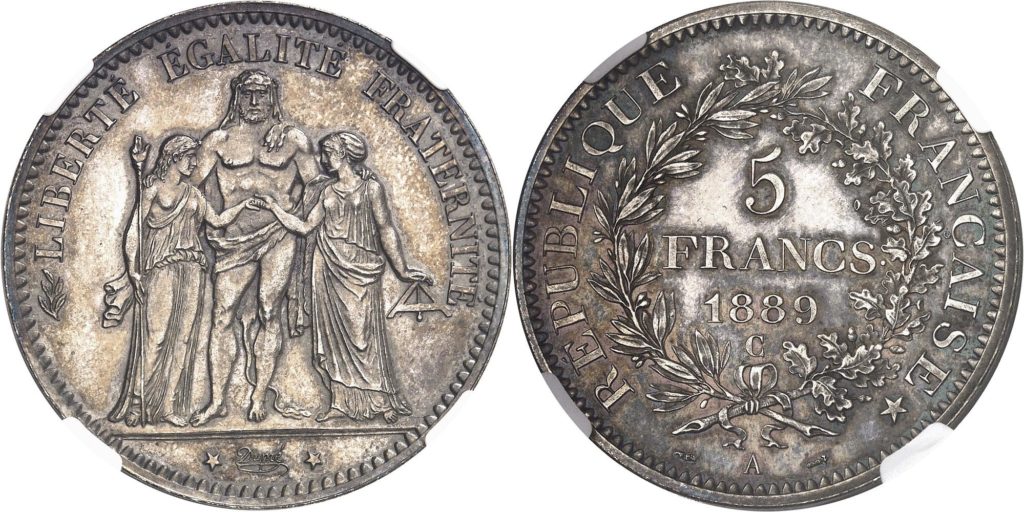 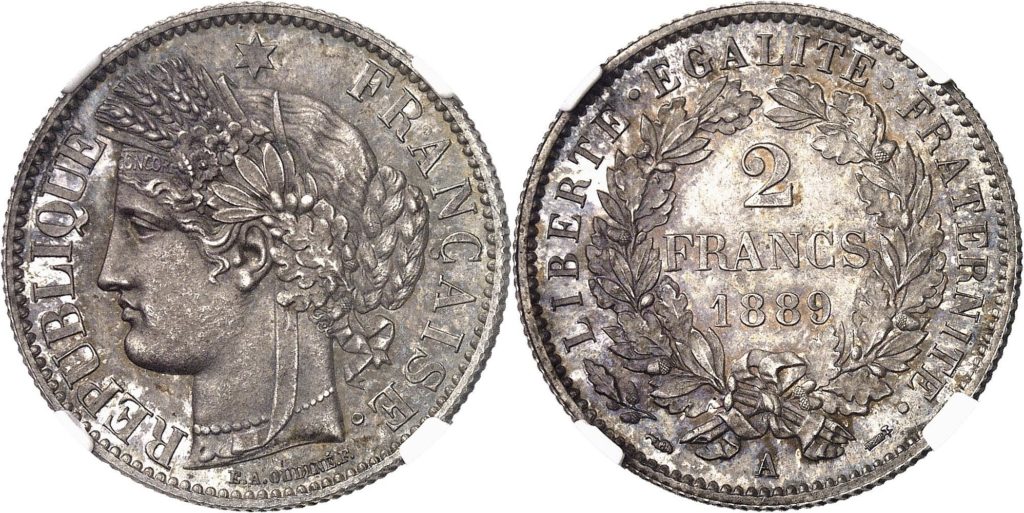 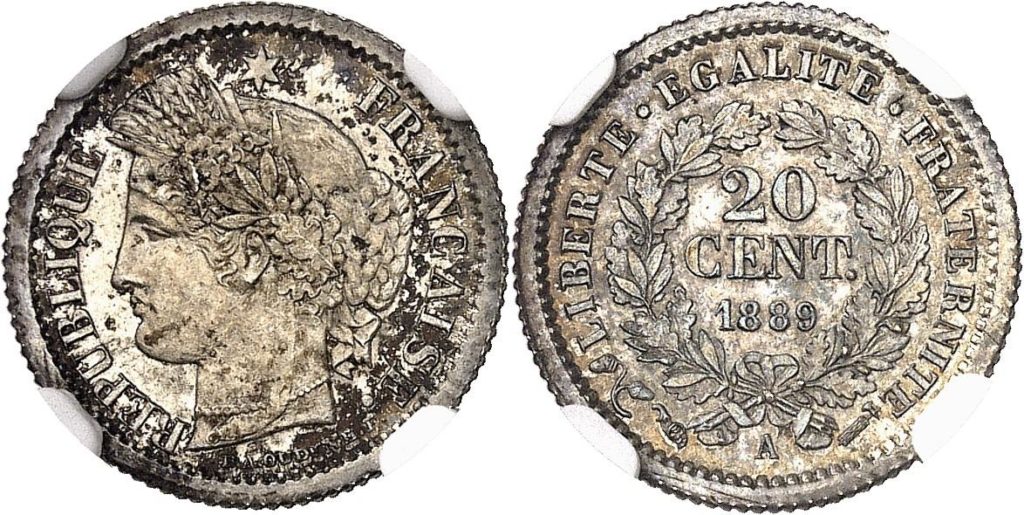 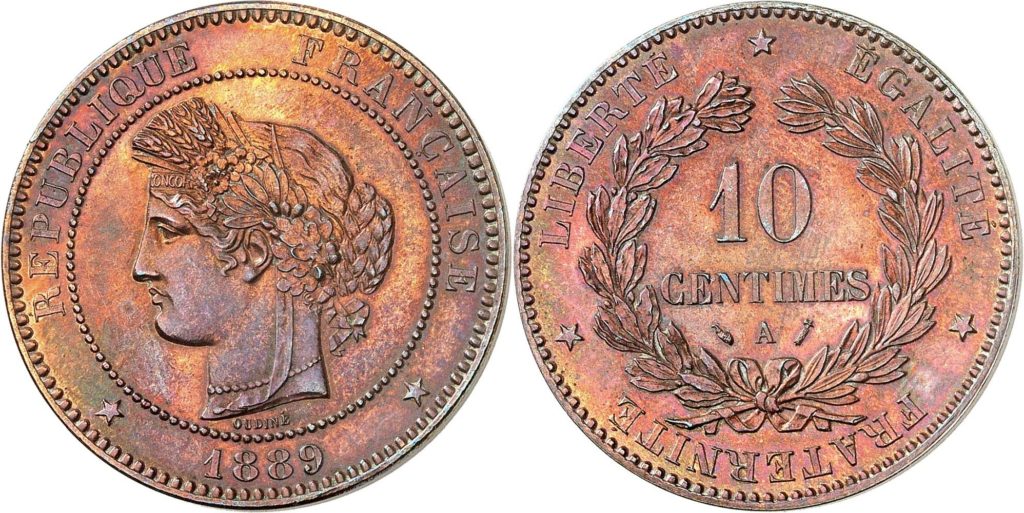 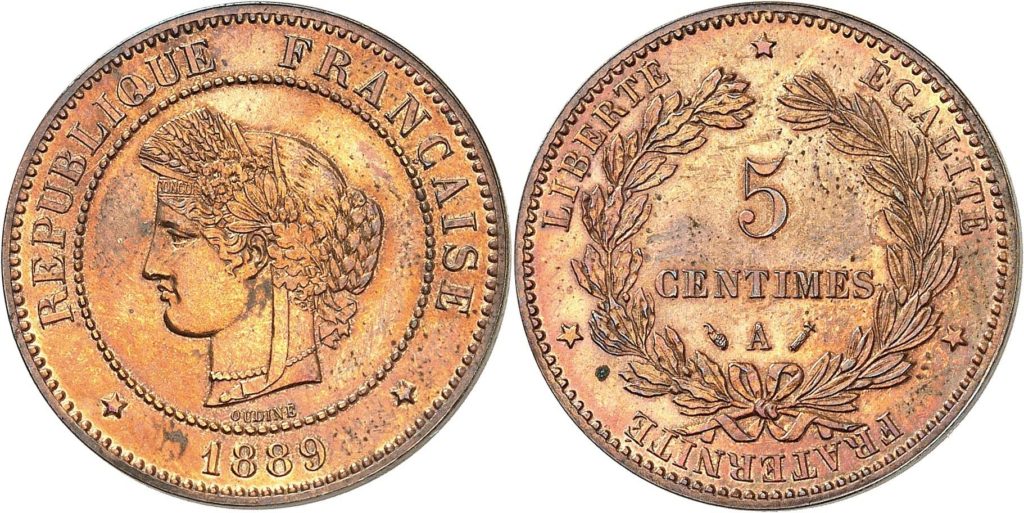 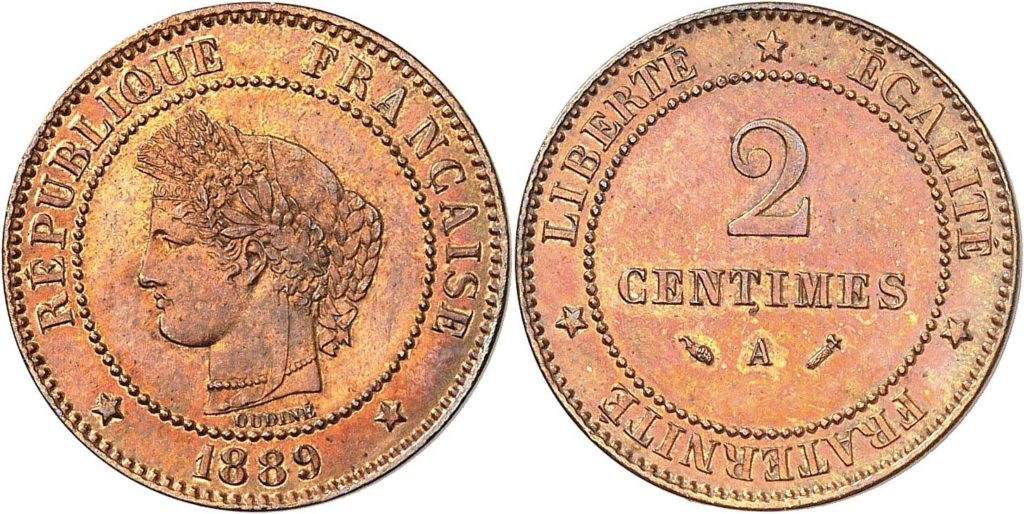 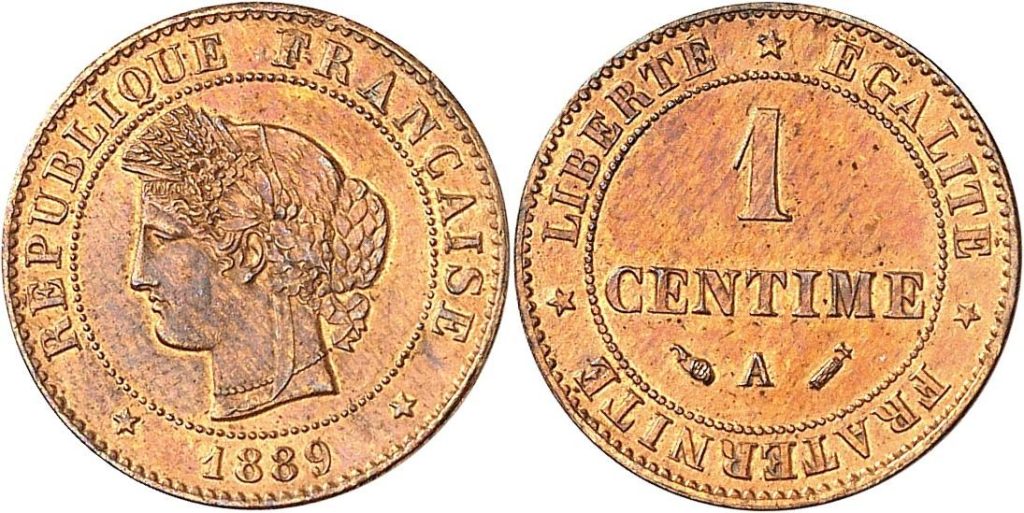 Obverse: FRENCH REPUBLIC / NATIONAL Coins. On an entablature, a lictor beam in the center, flanked by two horns of plenty pouring coins, and two branches, of laurel and oak, in saltire.

Reverse: Green velvet interior, the lid with a pull-tab that reveals the synoptic table of national coins.

Each piece of the box and the empty box will be sold individually at auction. Then, the complete box (with the coins) will be sold, under cover of a “faculty of meeting”, with a minimum bid of 205 800€. The reserve bid will be the sum of the bids made for each of the individual lots, if it is higher than the initial reserve bid of €205 800.