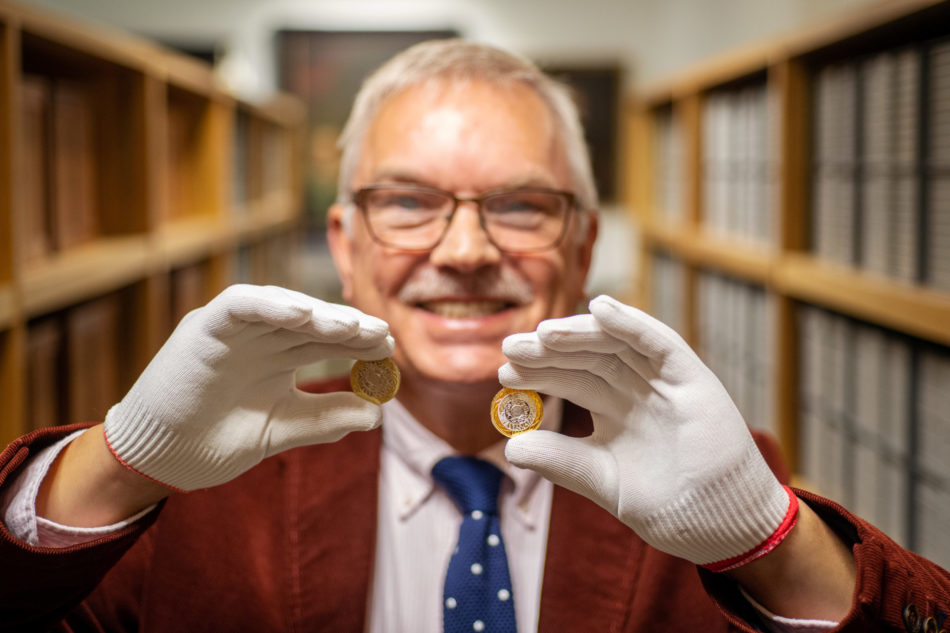 In celebration of the launch of the collectable 25th Anniversary coin, designer Bruce Rushin visited The Royal Mint to share his memories of the original design and to hear about the latest technological advancements involved in producing the commemorative coin. The artist said: “It was an astonishing feeling when my design was selected to appear on the first ever UK £2 coin. Twenty-five years later, it is an honour to have my design feature once again on the collectable £2 coin celebrating its anniversary. Visiting The Royal Mint to see the coins being struck has been fascinating. Being able to see the level of skill and craftsmanship that goes into making a collectable coin these days was very special. When compared to how the £2 coin was first produced, it shows just how much the technology has developed and was a real-eye opener for me.” 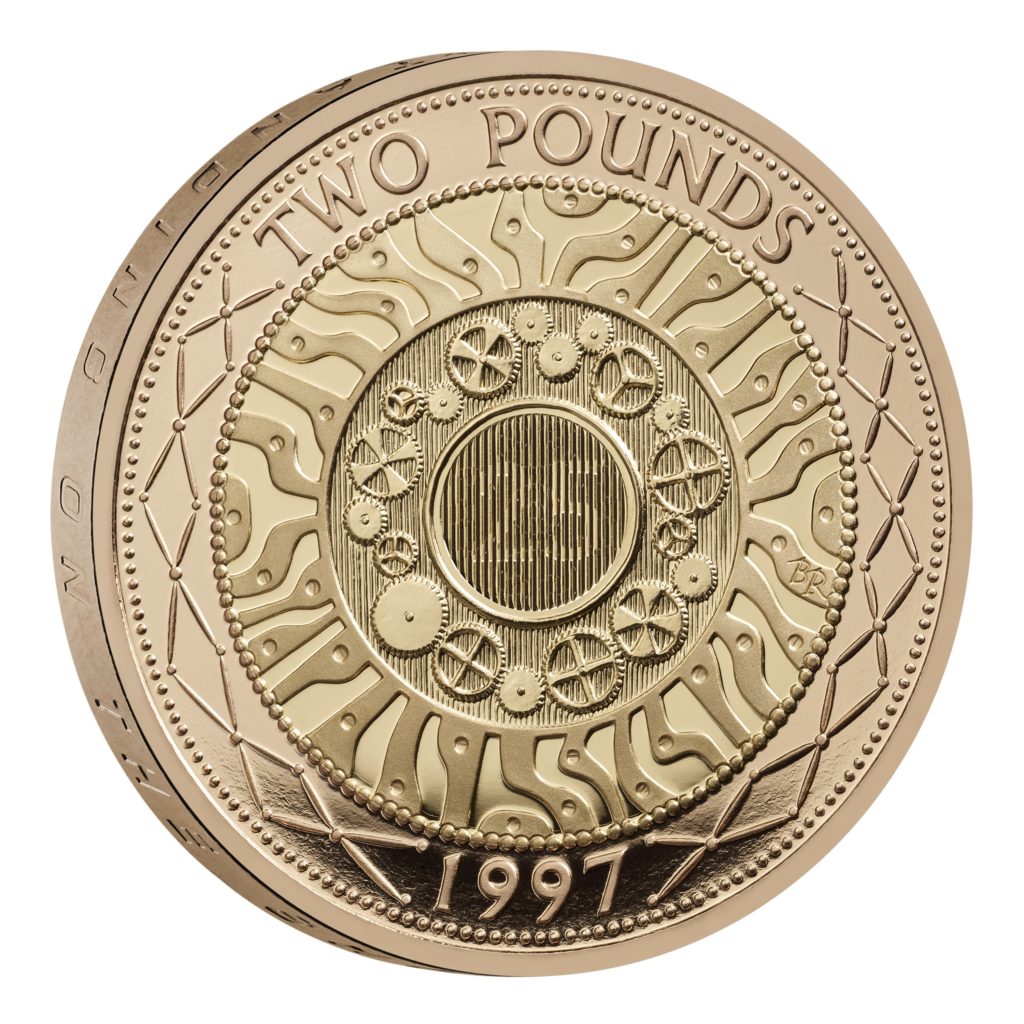 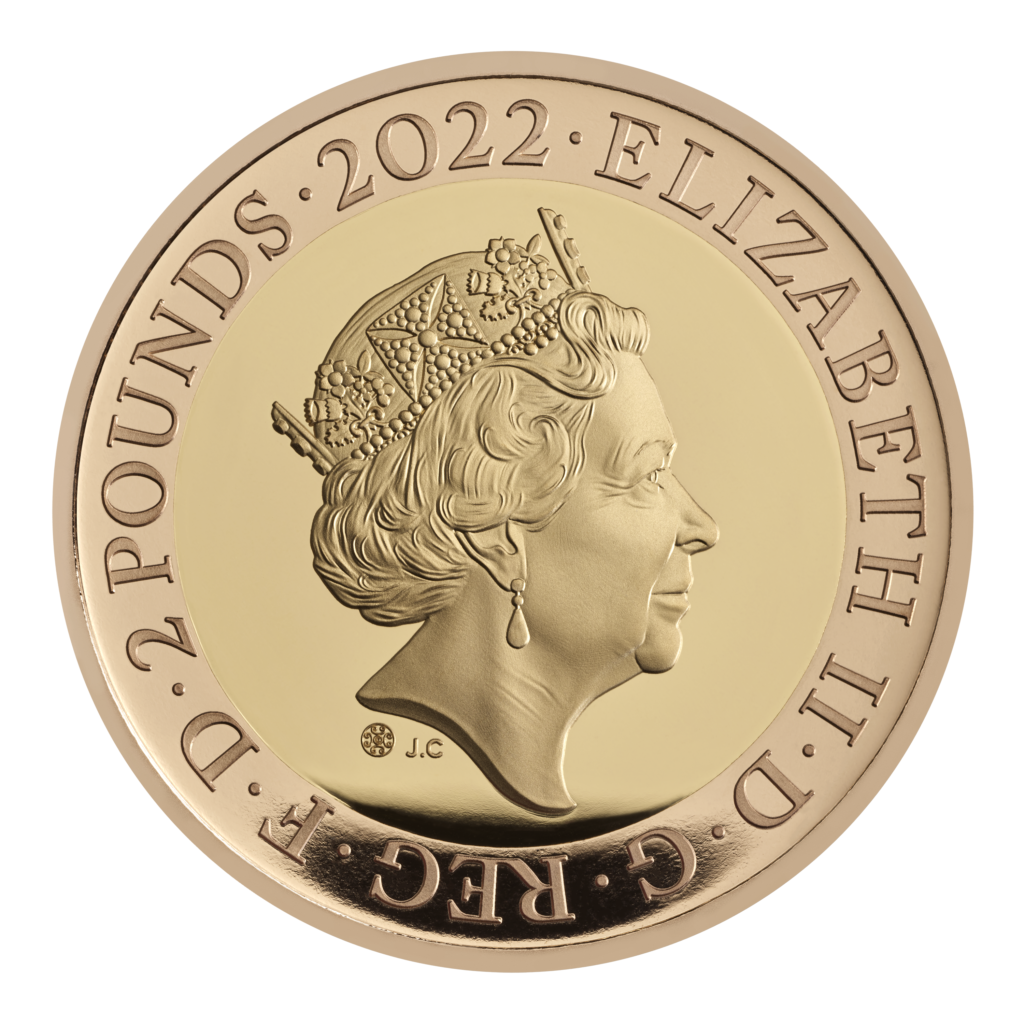 Since it was first struck for circulation 25 years ago, the bi-metallic £2 is the largest circulating coin denomination in the United Kingdom and has become a staple of our change. With more than 50 unique designs commemorating significant scientific, technological, sporting, and literary achievements and key moments in British history, it is a popular choice of coin for collectors. 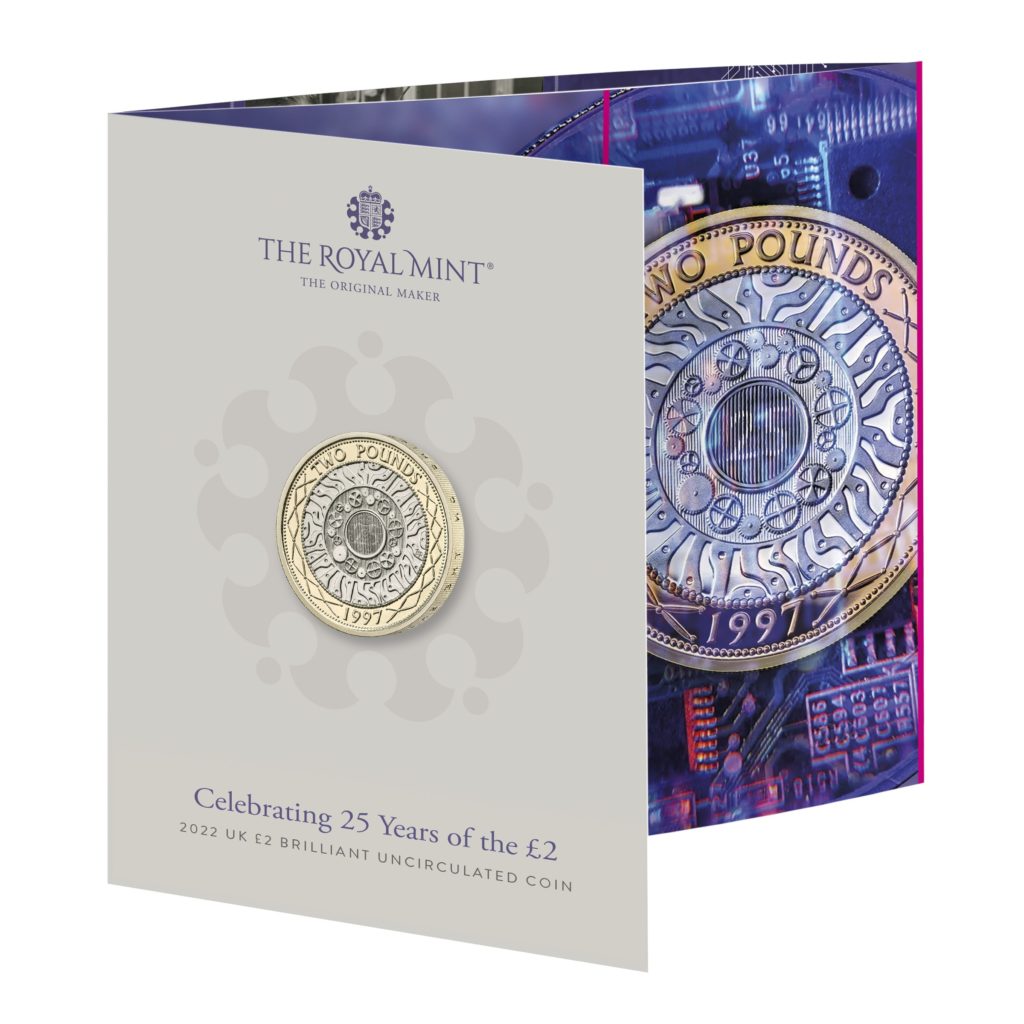 Inspired by the history of technological achievement, Bruce Rushin’s 1997 design features four concentric circles, depicting industrial and technological progress from the Iron Age to the Internet. The ‘Technology’ design features on circulating £2 coins dated 1997 to 2015 and has been released on the new commemorative edition and enhanced with special features in a nod to the anniversary.

Combining tradition and technology, a latent feature has been added to the design to reveal the number ‘25’ within the central cog when it catches the light. The original twist represents the evolution of minting technology at The Royal Mint – the special high-security feature is created using state-of-the-art laser technology to achieve a sharper detail than the milling machine used in 1997. 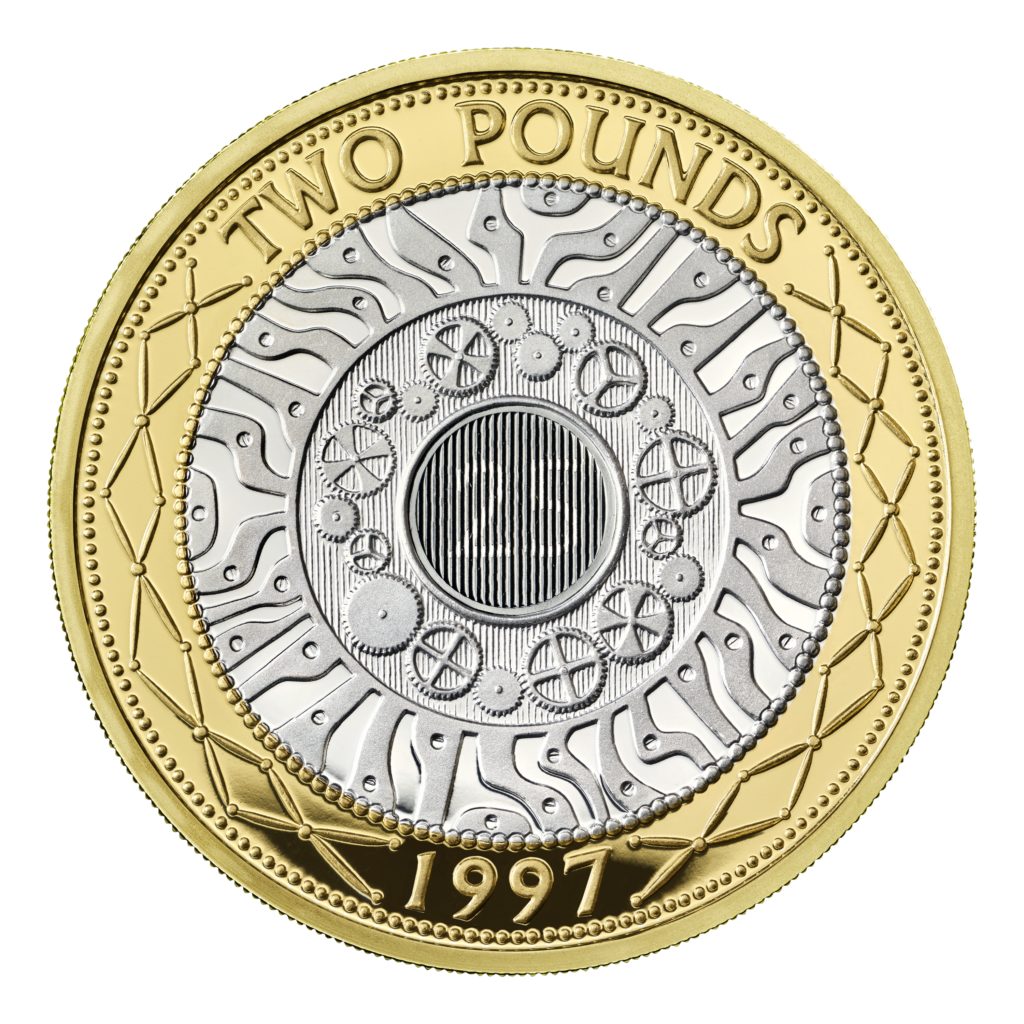 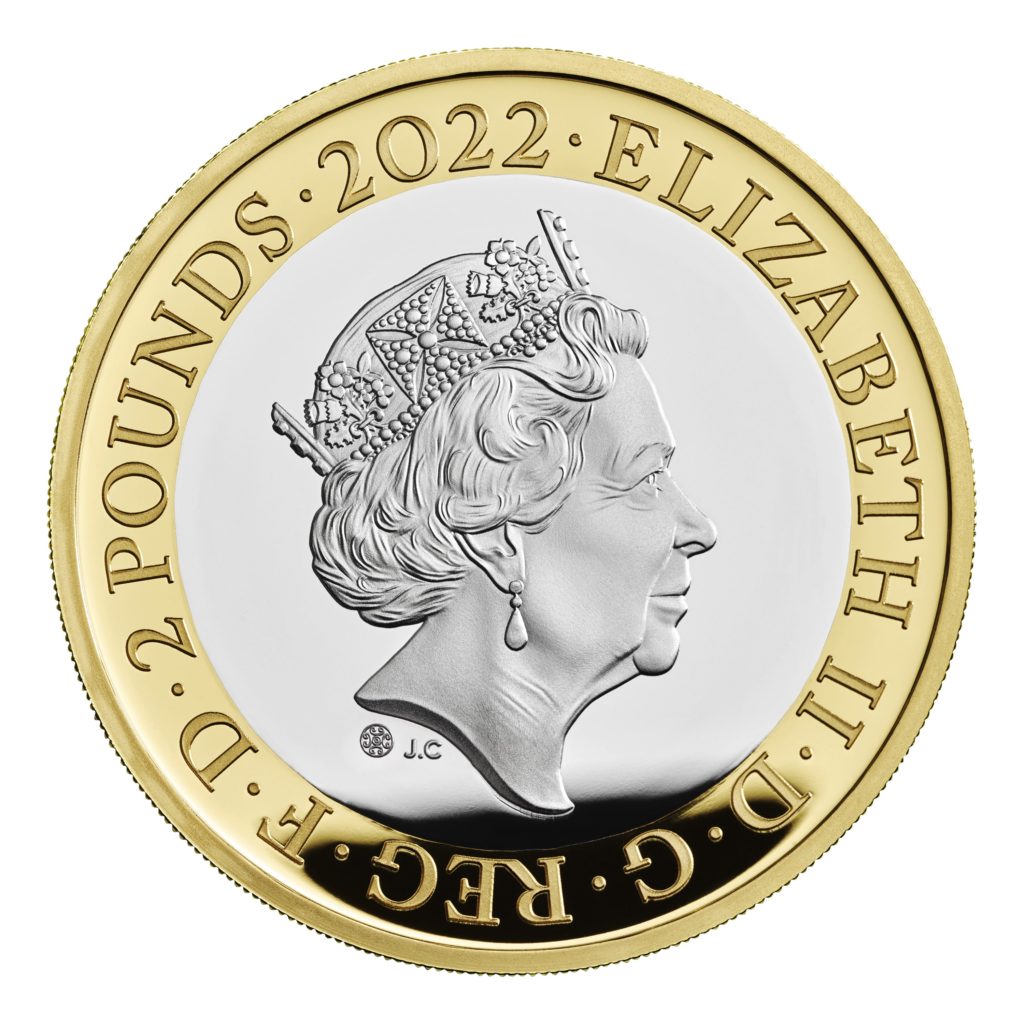 The obverse side of the anniversary coin also features an ‘iron age’ privy mark to the bottom of the portrait of Queen Elizabeth II, a tribute to Bruce Rushin’s contribution. As with the 1997 design, the coin features the edge inscription ‘standing on the shoulders of giants’ taken from a letter written in 1676 by Sir Isaac Newton representing that today’s achievements would not be possible without the discoveries of the past. 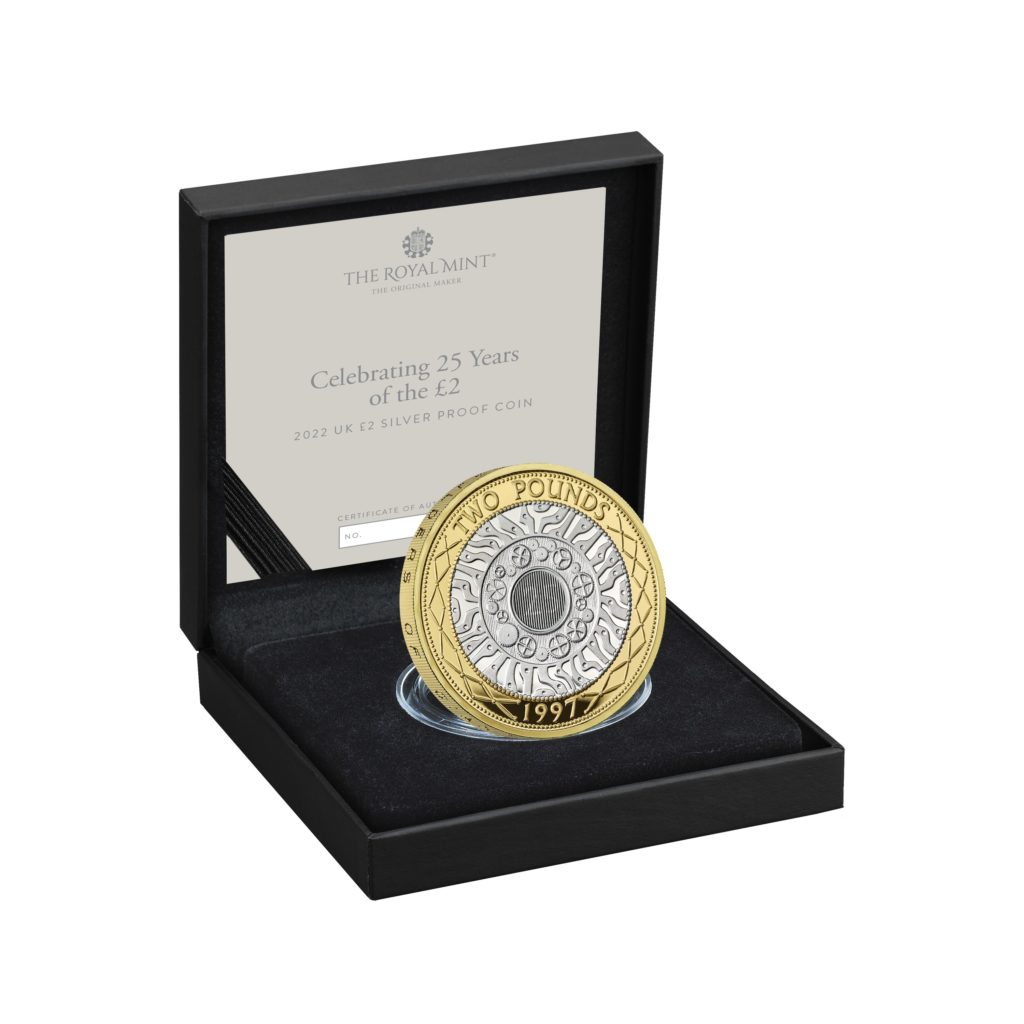 Rebecca Morgan, Director of Collector Services at The Royal Mint said, “It has been twenty-five years since the UK £2 coin was first struck for circulation, we are delighted to be celebrating this occasion with a new collectable £2 coin bearing the same design that first appeared in peoples change. As the largest denomination in circulation, the £2 coin has become a favoured piece amongst collectors, commemorating milestone anniversaries and events throughout the UK’s history.”

Struck for the 2022 anniversary, the commemorative edition bears the fifth coinage portrait of Her Late Majesty Queen Elizabeth II on the obverse side of the coin – This is the first time in the history of the £2 coin that the definitive portrait by Jody Clark features on the opposite side of the ‘Technology’ design. The Royal Mint has committed to releasing coins dated 2022 bearing Queen Elizabeth II’s portrait to ensure a sustainable transition to the coinage of King Charles III.

In addition to the collectable £2 coin, two historic £2 coin sets will also be available to collectors to purchase. The twenty-five years of the £2 effigy set features the three definitive coinage portraits of Her Majesty The Queen to appear on the £2 coin, including a coin dated 1997 and a coin dated 2022, the latter of which has been struck specially for the 25-year anniversary and features the original ‘Technology’ reverse design. A special 1986 – 1996 Commemorative £2 coin set will also be available and includes the sought after 1989 – The Tercentenary of the Claim of Right coin. 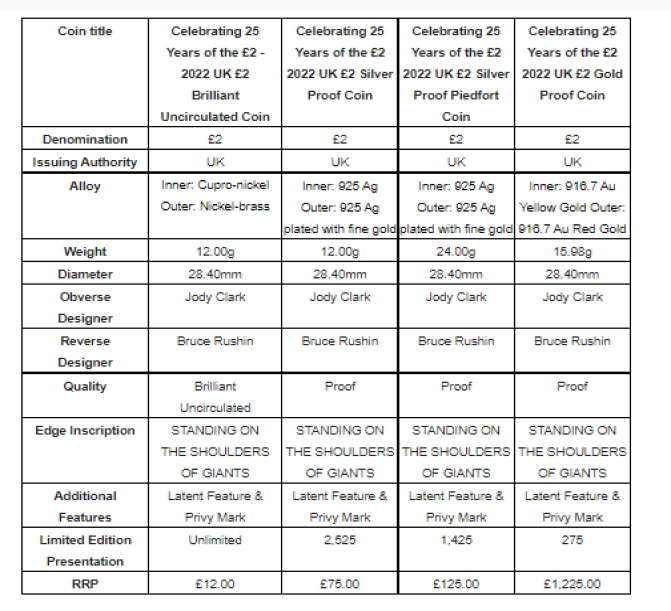