The Federal Ministry of Finance presented some elements of its 2020 Numismatic Program.

Germany is proposing a new feature this year, however, with a partially coloured official coin.

The Federal Government has decided to mint and issue a €20 commemorative coin in May 2020 to mark the 300th anniversary of Baron von Münchhausen.

BU minting quality coins will be put into circulation at their face value (20 euros).

PROOF quality coins will be issued at a selling price higher than their nominal value.

The coin was designed by the artist Frantisek Chochola, Hamburg.

The obverse of the coin is illustrated by the Baron riding a cannonball, which appears as a flight through space and time. The coin is partially colored on this side.

The reverse side shows an eagle, the lettering “BUNDESREPUBLIK DEUTSCHLAND”, the number and designation of the face value, the mint mark “A” of the Berlin Mint, the yearmark 2020 and the twelve European flag stars.

A “SILVER 925” indication has been engraved in relief.

Edge legend: “WITH THE BRAVOURE AND THE PRESENCE OF SPIRIT”.

The German government has decided to mint a 10 euro coin dedicated to sand yacht  and probably will issue it in March 2020.

This coin is the second of a series of three “Air Movements” coins, which began in 2019. It focuses on sports where air and wind are the only means of propulsion.

The 10 euro coin consists of an inner copper-nickel core, an outer red bronze ring and a translucent plastic ring inserted between the two metal components. This second coin in the series differs from the first with its bronze outer ring. It is a bimetallic with two different metals, cupronickel and coin bronze.

The coin weights 9.8 grams. It is produced in both BU and PROOF qualities.

The coin was designed by the Berlin artist André Witting.

The obverse presents a sand yacht, a sport that takes place on the border between water and land

The reverse shows an eagle, the lettering “BUNDESREPUBLIK DEUTSCHLAND”, the face value and the euro designation, the year 2020, the twelve European stars and – depending on the Mint facility that engraved the coin – the mintmark “A” (Berlin), “D” (Munich), “F” (Stuttgart), “G” (Karlsruhe) or “J” (Hamburg).

The edge of the coin is smooth.

The wolf and the seven small goats 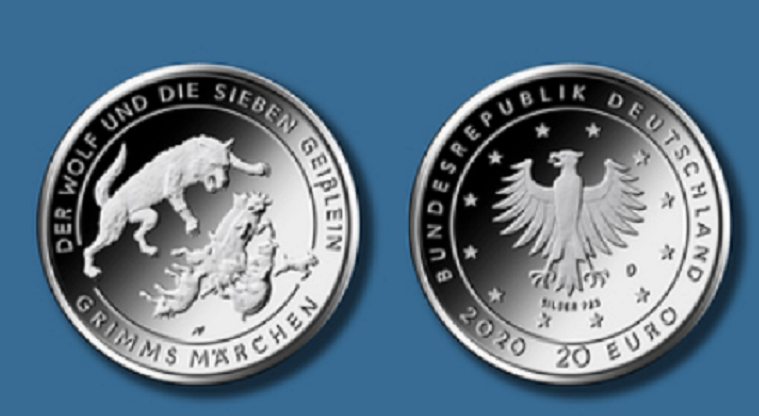 The obverse of the coin “The Wolf and the Seven Little Goats” shows the dominant figure of the wolf and the small goats frightened by the dangerous predator. The design is from the artist Adelheid Fuss of Potsdam.

2€ “Brandenburg” designed by the artist Jordi Truxa from Neuenhagen shows the castle Sanssouci.