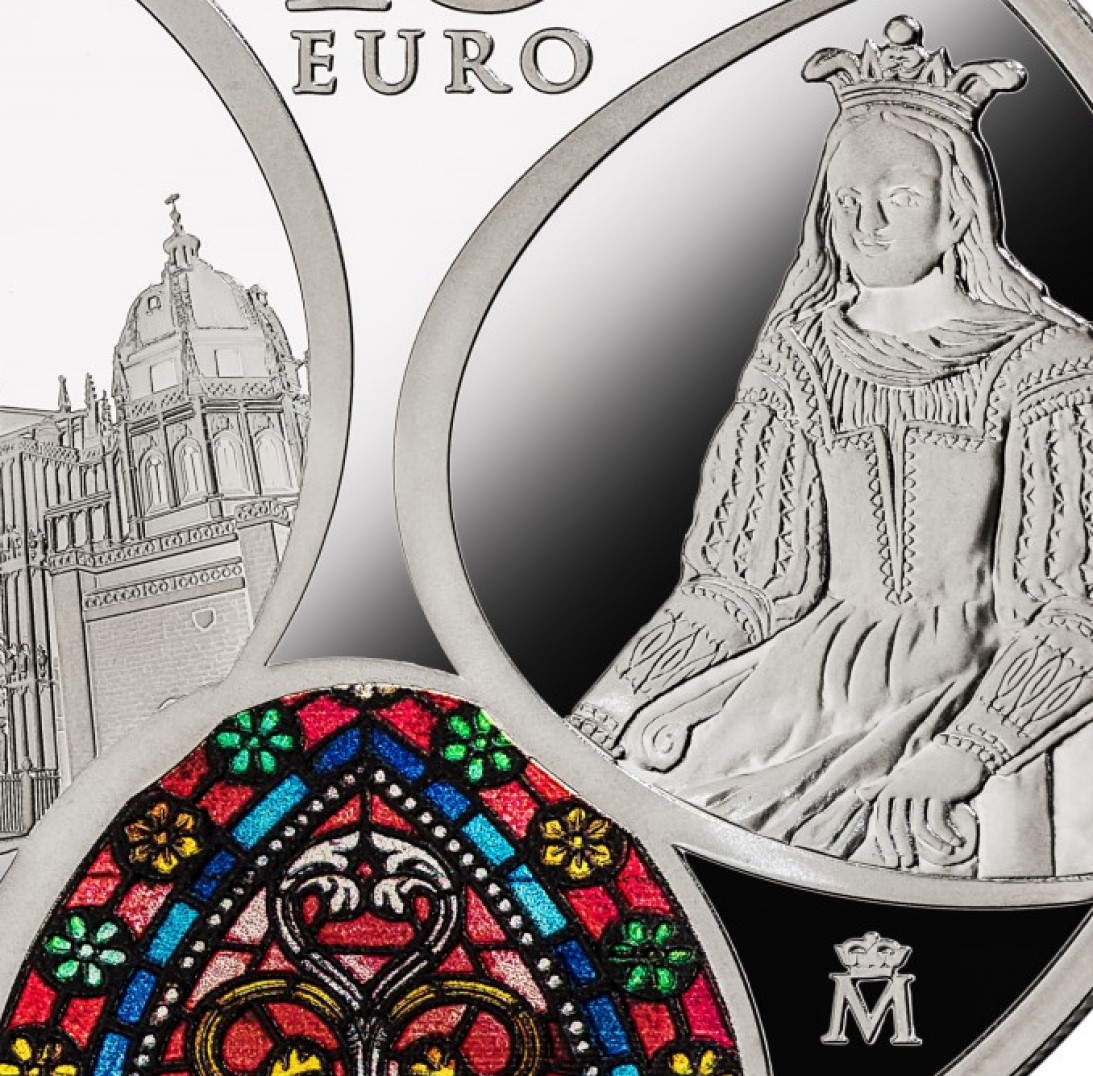 The spanish Mint (FNMT) has announced its numismatic program for 2020 (this article will be updated over the time, with the informations disclosed by the FNMT).

For 2020, the FNMT (Mint of Spain) foresees the following numismatic issues.

The first Coin Set to be issued for year 2020 is the one dedicated to the World Money Fair. This special collection is limited to a maximum of 2,000 sets.
In the blister of this set appears in the Spanish side the Mudejar tower of San Salvador in Teruel, northern Spain, and in the German side the city hall of Stralsund, from the Middle Ages, in the north of Germany.

Sets contains 8 annual coins and the 2020 €2 commemorative coin dedicated to the Mudejar tower of San Salvador in Teruel. 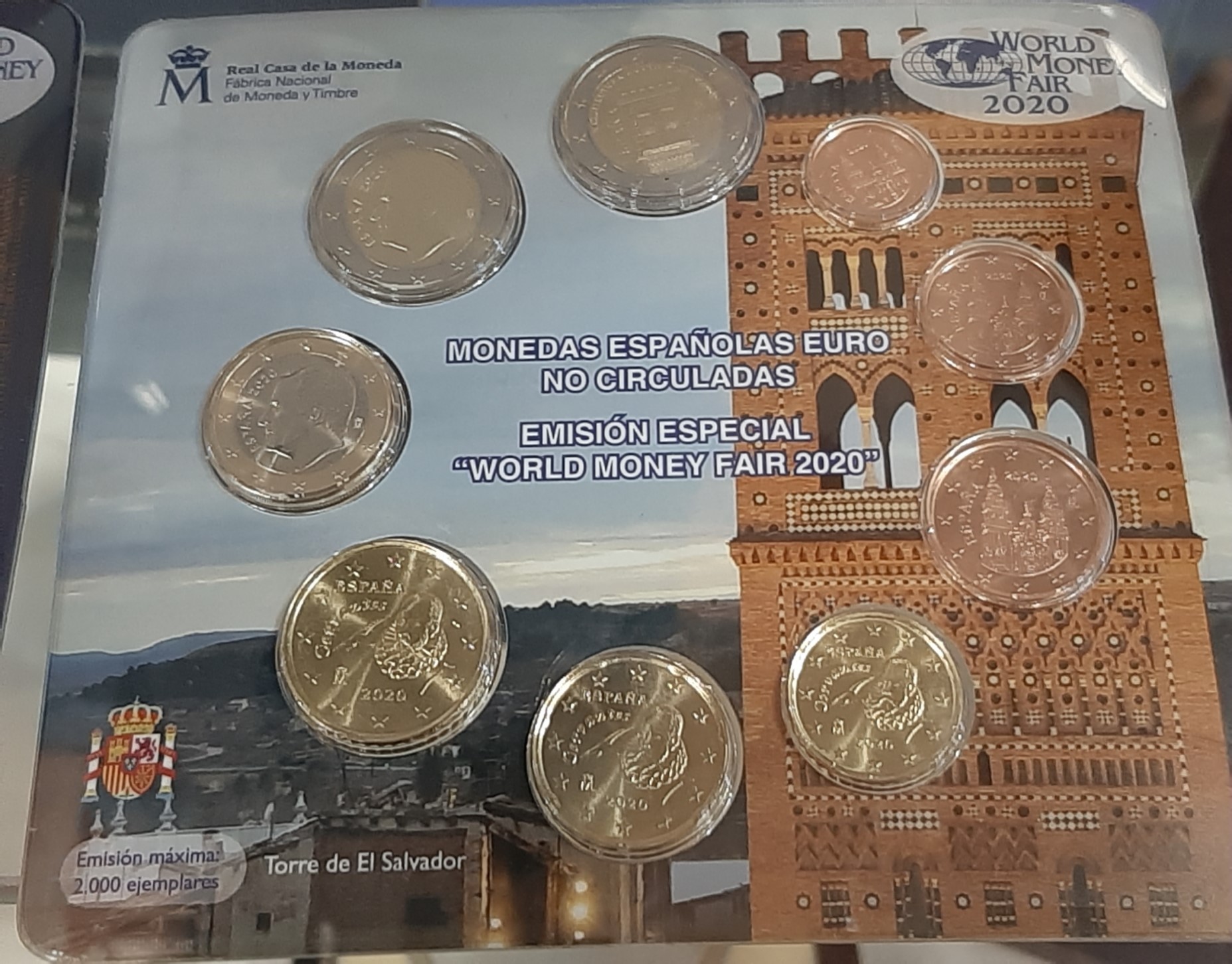 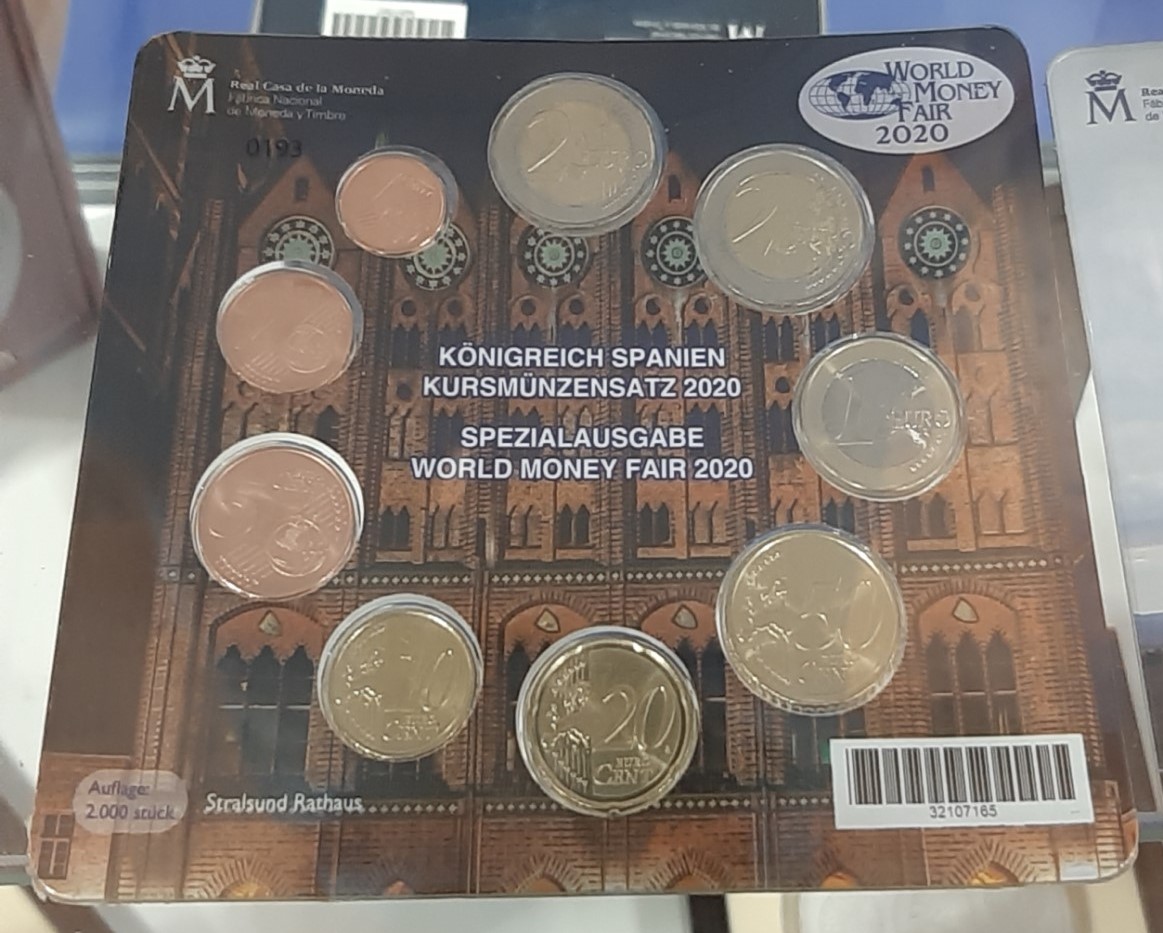 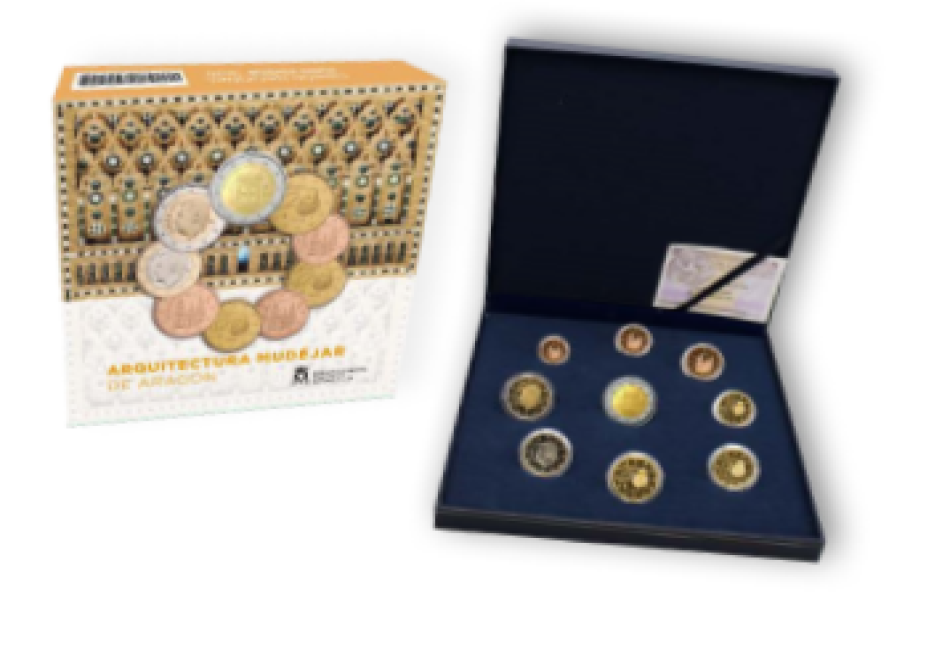 The regular 2020 BU Circulation Coin Set is limited to 15,000 sets. The blister includes information of Mudejar Architecture in Aragon as well as some details of the San Salvador Tower in Teruel. 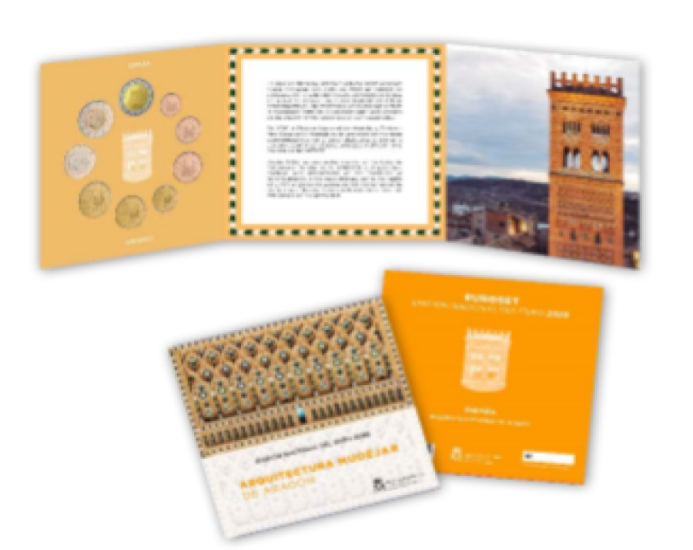 The 2020 issue is dedicated to the Mudejar Architecture of Aragon. The development in the 12th century of Mudejar art in Aragon was the result of a particular political, social and cultural conditions that prevailed in Spain after the Reconquista.

This art, influenced by Islamic tradition, also reflects various contemporary European styles, particularly the Gothic. Present until the early 17th century, it is characterized by an extremely refined and inventive use of brick and glazed tiles in architecture, especially in the belfries.

The coin is included in BU and proof 2020 euro Circulation Coin Sets and in proof quality in the special blister pack that is limited to 7,500 sets. 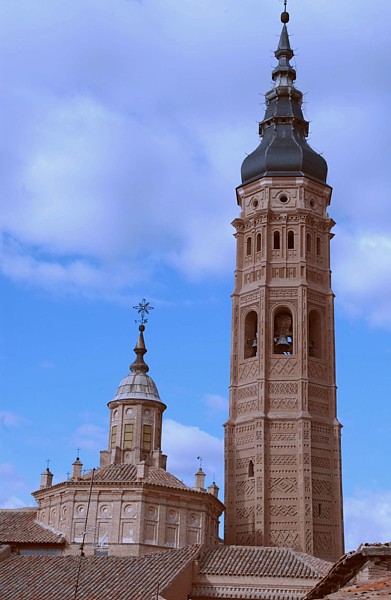 This coin is dedicated to Juan Sebastian Elcano(1519-2019) – In 1519 two hundred and thirty-nine men and five ships left Spain searching a route westward to the Spice Islands (called nowadays Moluccas Island in Indonesia). They crossed the Atlantic Ocean, then rounded the southern tip of South America through the Strait of Magellan, and then sailed the Pacific Ocean, arriving in the Philippines, where Magellan died in 1521, and finally reaching the Spice Islands on November 6th 1521.

The second one, within 2020, will be dedicated to the crossed of Strait of Magellan. The third one to the arrival to Spice Islands in 1521 and the fourth one to the arrival of Juan Sebastian Elcano to Spain The four coins will be housed in a blister and it can be ordered with the second coin.
To commemorate this event the Royal Spanish Mint will release four coins of 8 Reales during four years (one per year). It started in 2019with the 8 reales silver coin called “The Departure”.

It took them over two years to reach the Moluccas since their departure from Spain, and with only two of the original ships remaining. On September 6th 1522, the Victoria returned to Spain, led by Juan Sebastian Elcano. The Emperor Charles V named him as “PRIMUS CIRCUMDEDISTI ME” The first man to circumnavigate the world, as it appears in his coat of arms. 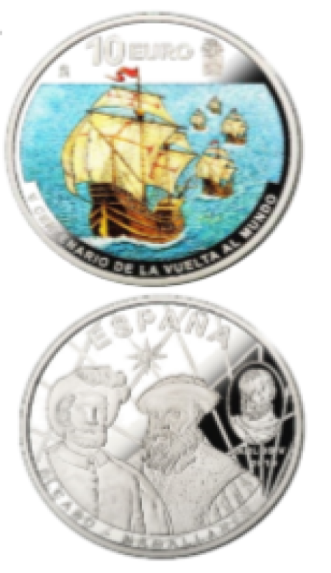 UEFA invited the Royal Spanish Mint to participate in the official collector coin programme for the UEFA European Football Championship that are set to be held in 12 cities in 12 European countries from 12 June to 12 July 2020.

For this event, we will issue one silver and one gold coin both depicting on the obverse the effigy of H.M. the King Felipe VI. 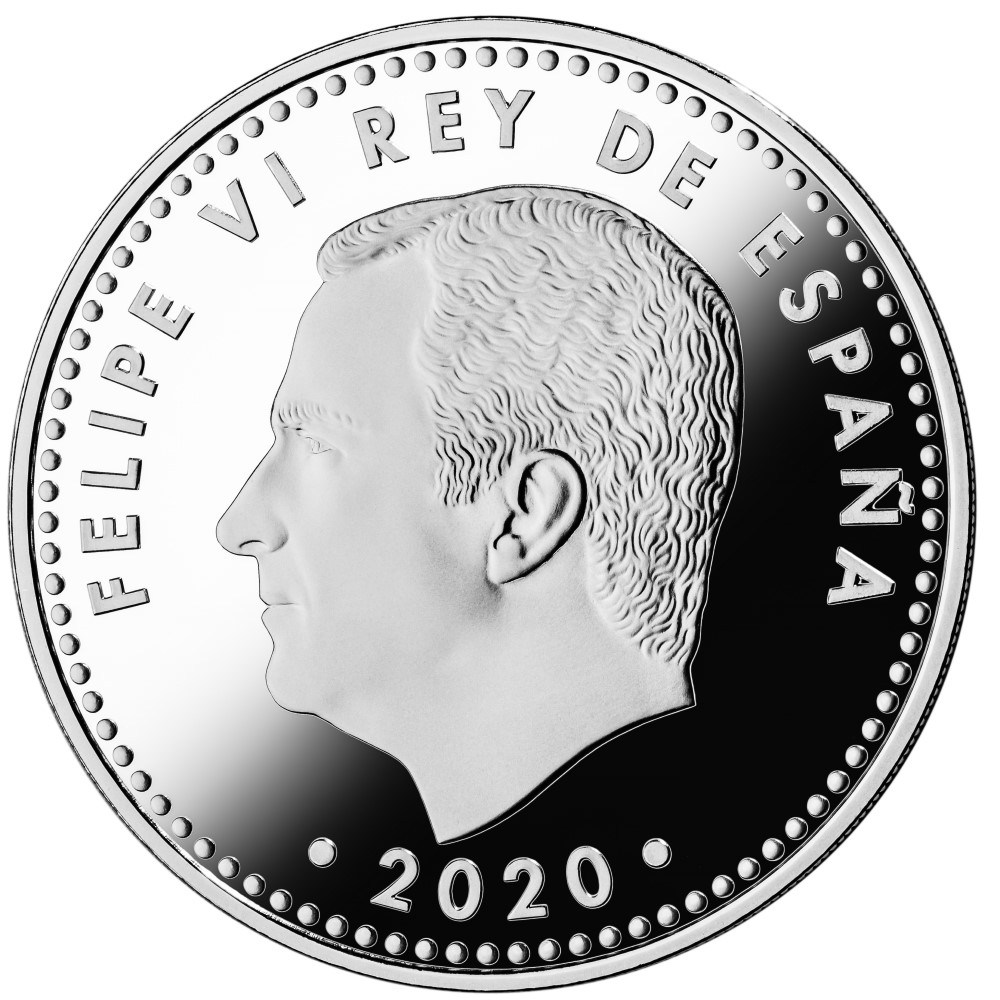 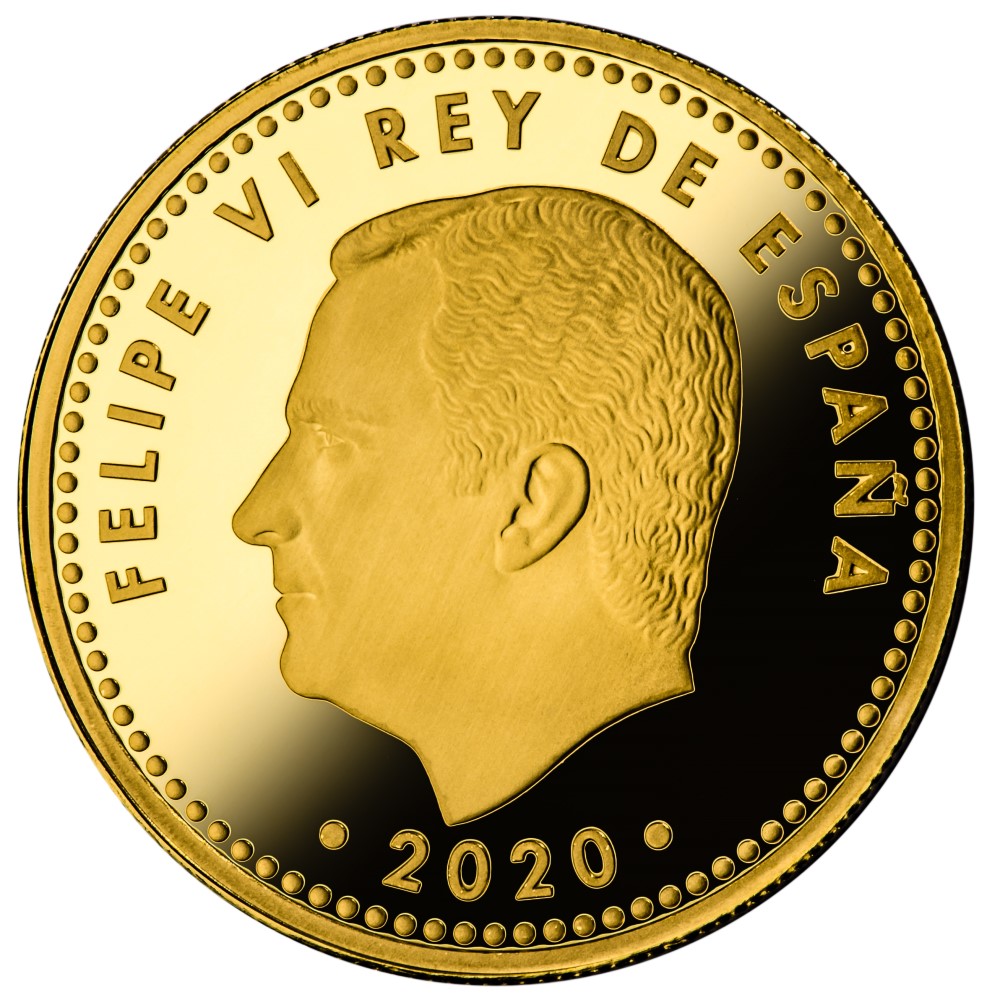 The reverse of the silver coin shows part of a football stadium as a background and a scene of a football game between two players. 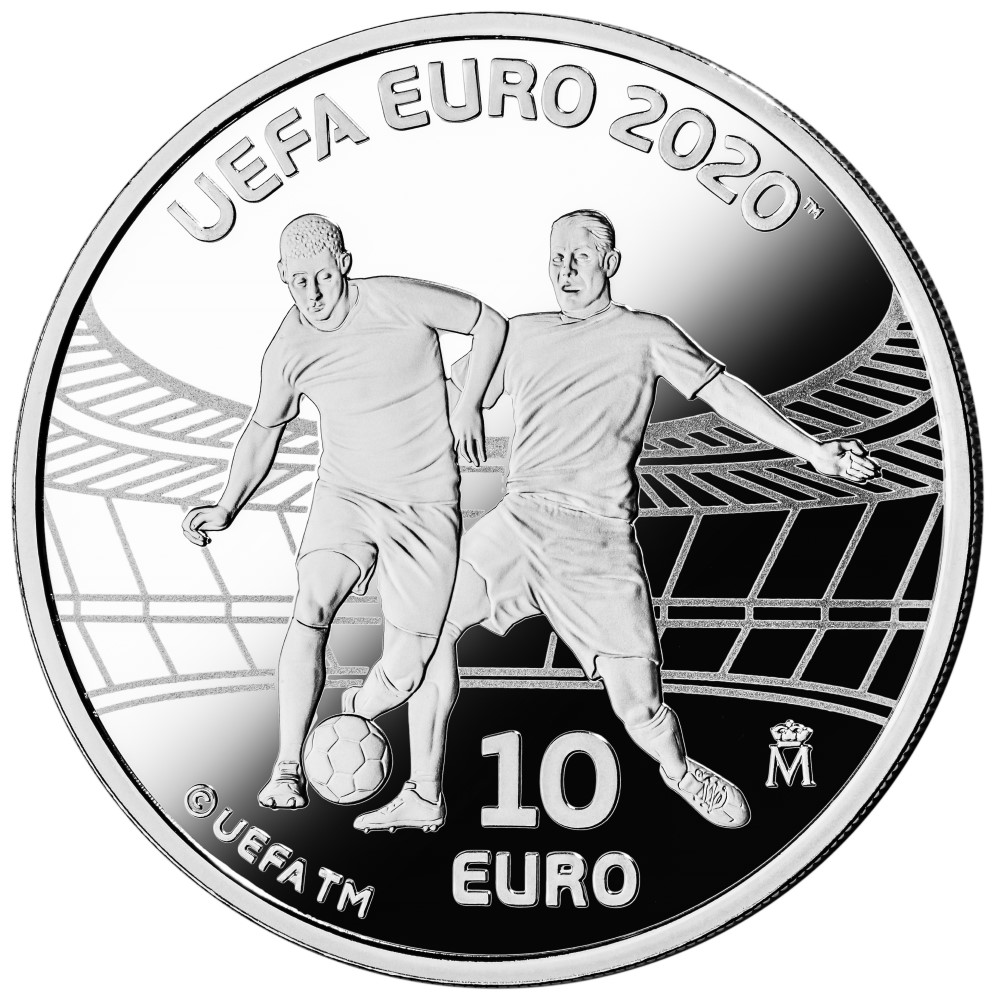 On the reverse side of the gold coin, on a ball of football as a background, there is an image of the San Mamés Stadium in Bilbao, located in the north of Spain, where four matches of this competition will be played. 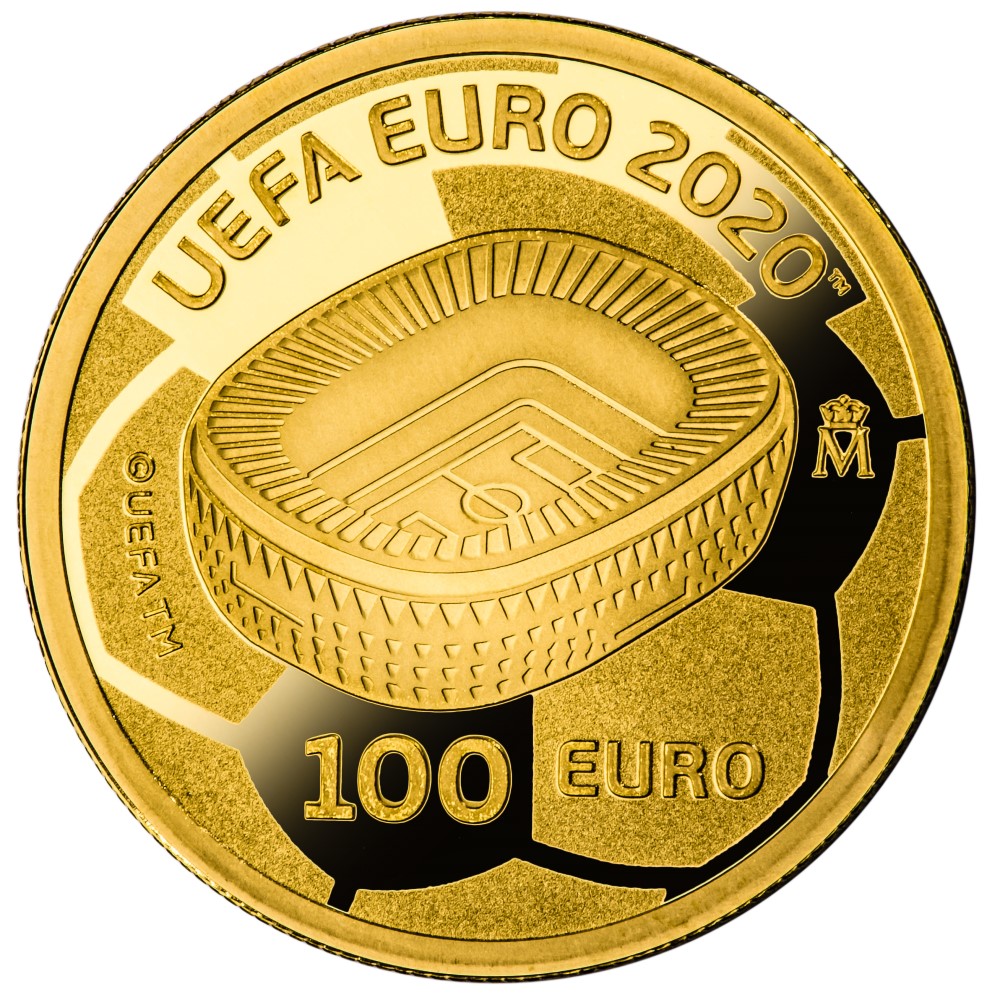 Since its creation in 1920, the Spanish national football team has been the team that represents the Royal Spanish Football Federation (RFEF) in the official competitions. The team is familiarly known as “La Furia Española” (The Spanish Fury), “La Furia Roja” (The Red Fury) or lately as “La Roja“ (The Red) due to the red uniform they wear and the bravery of the players in every game. It has won the FIFA World cup Championship in 2010, and three times the UEFA European Championship (1964,2008 and 2012).

To commemorate this centenary, the Royal Spanish Mint will issue a €30 face value silver coin that will be distributed loose for its face value through the branches of most financial entities in Spain and it will be also available in a special numbered blister pack limited to 5,000 coins.

The reverse depicts a football player in action, the Spanish football team coat and a QR code. In the obverse appears H.M. the King of Spain Felipe VI, together with H.M. the Queen Letizia. 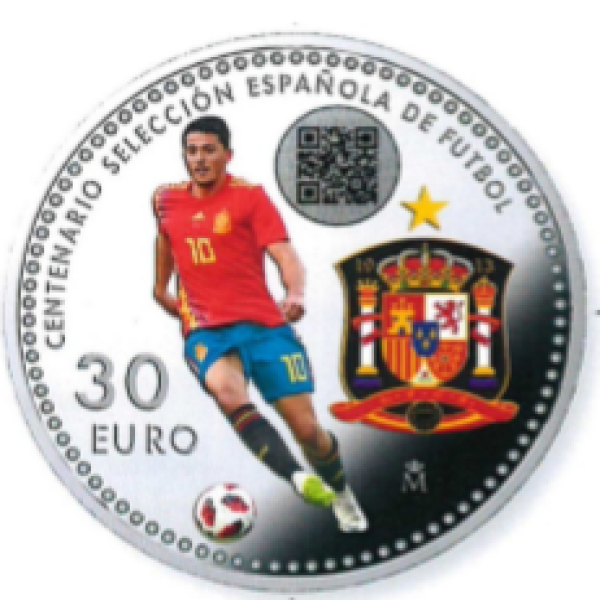 The EUROPA STAR is a unique programme that brings together several European mints around a common theme. This year the fifth and LAST issue continues with Gothic period as we go back through the Ages of Europe.

This issue comprise two coins, one made in gold and another one made in silver. The Spanish coin shows an image of Toledo’s Cathedral, a portrait of Maria de Molina, and a detail of one of the stained glass of Leon’s Cathedral. 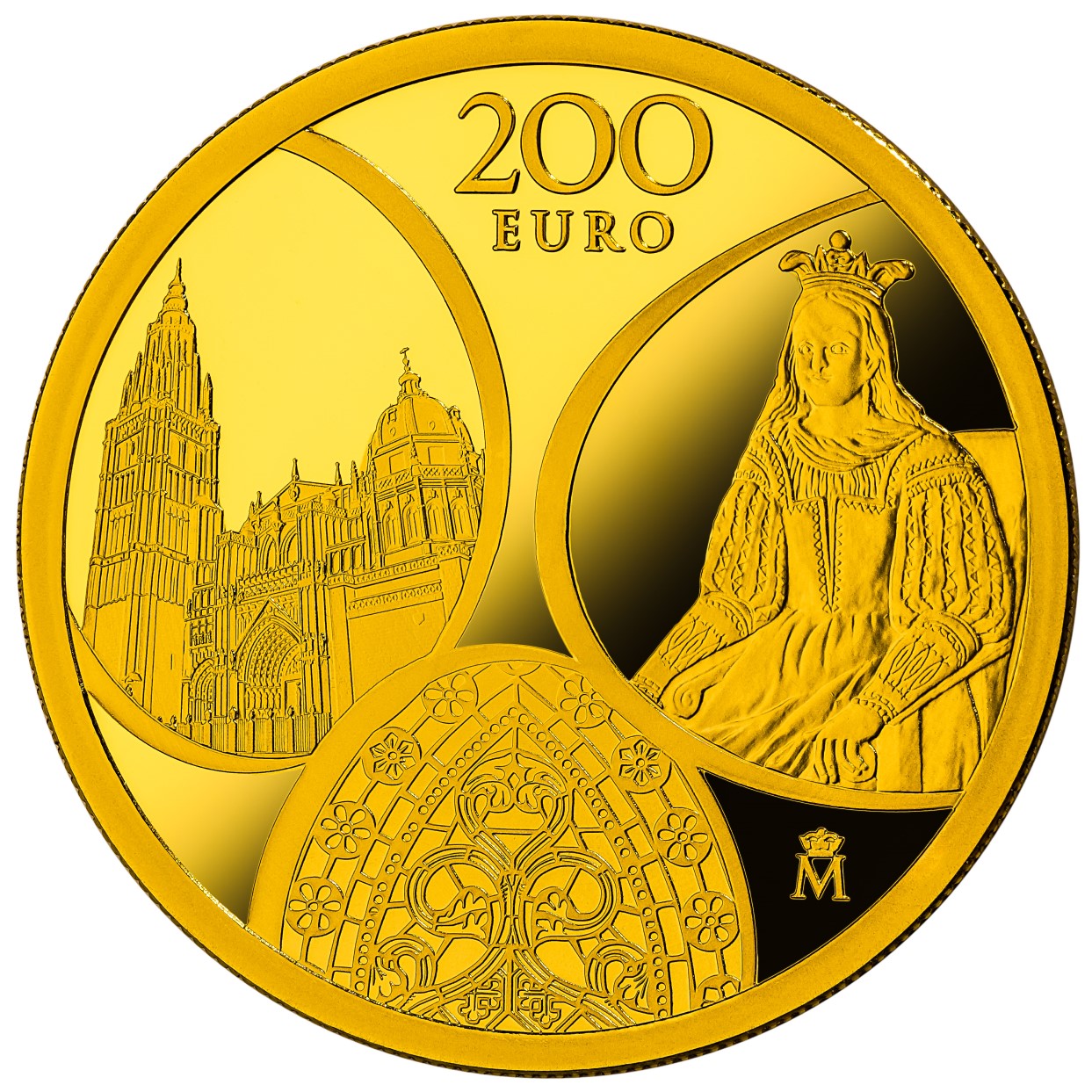 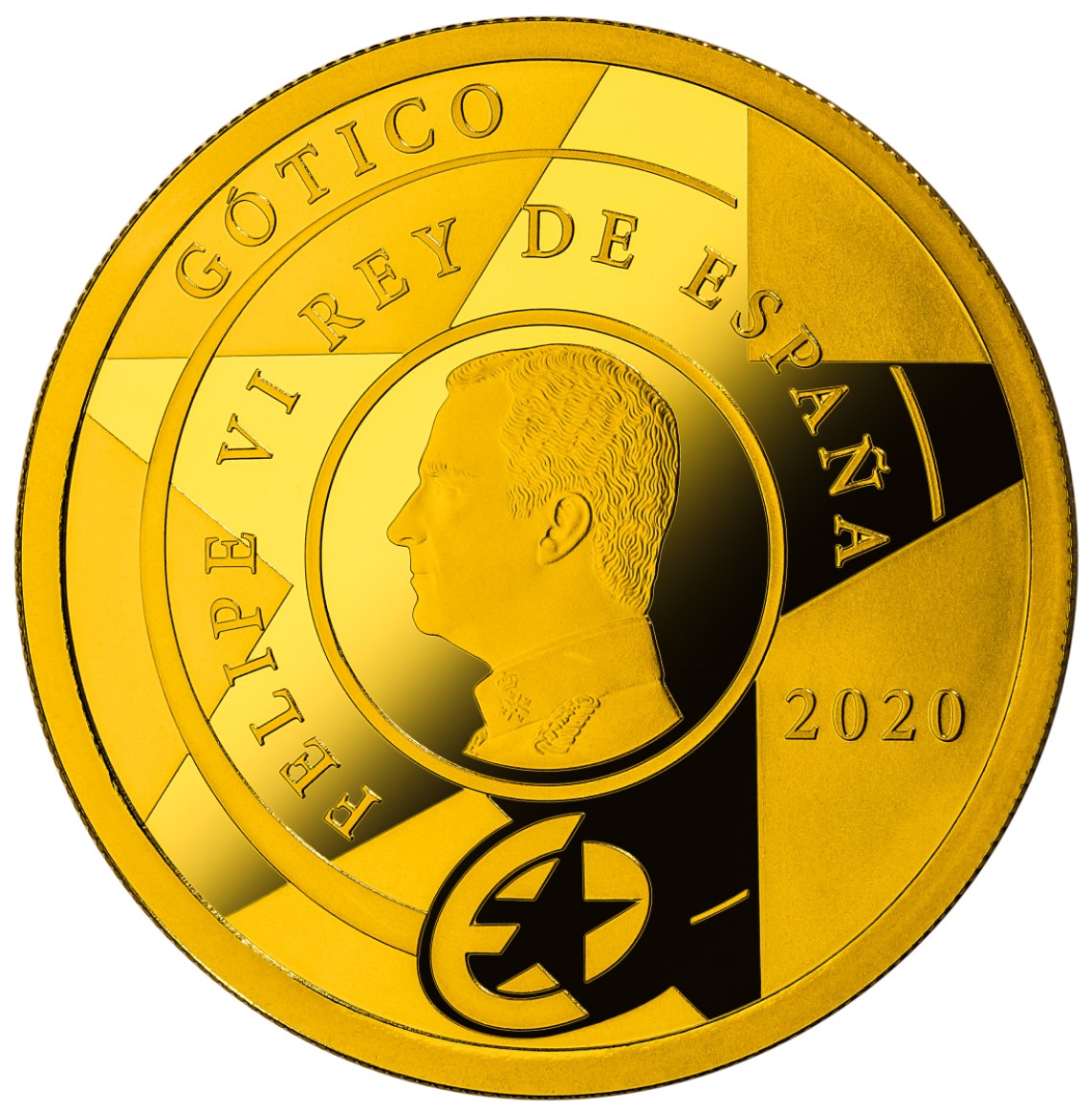 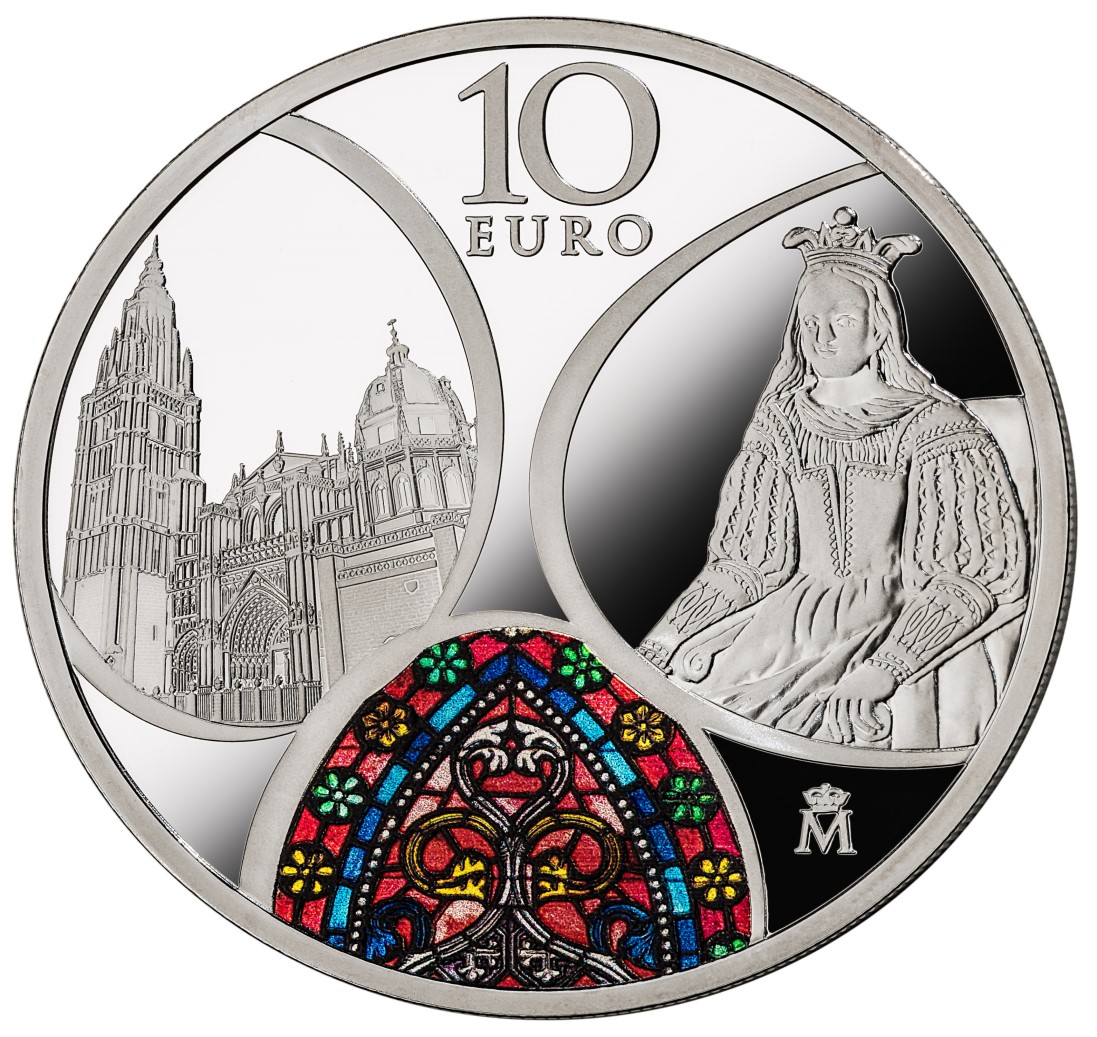 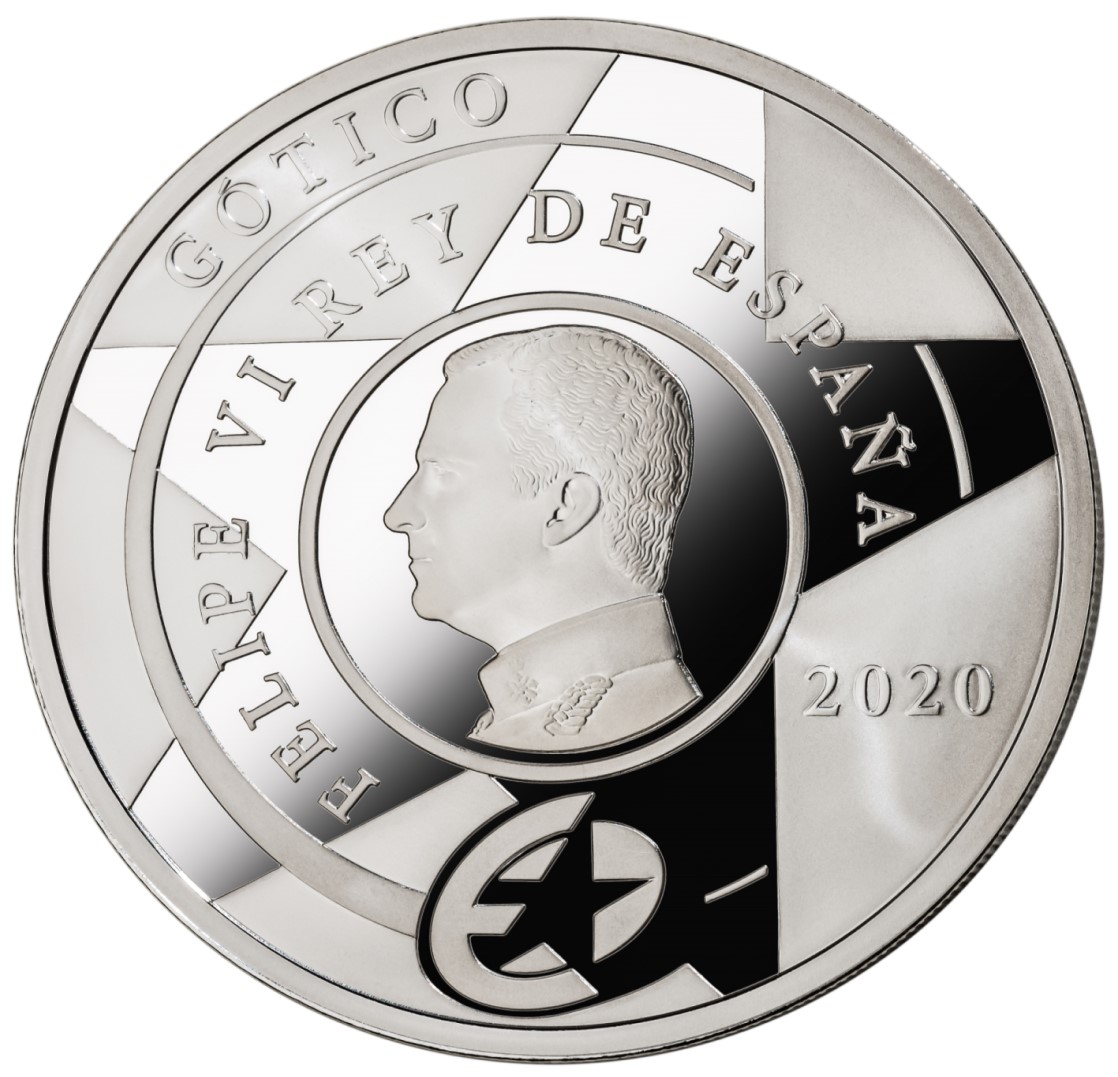 The Cathedral of Saint Mary of Toledo is a Roman Catholic church in Toledo, a well known city located in the center of Spain. The cathedral of Toledo is one of the three 13th-century Gothic cathedrals in Spain and is considered to be the “Magnum Opus” (the masterpiece) of the Gothic style in Spain. It was begun in 1226 under the rule of Ferdinand III and the last Gothic contributions were made in the 15th century when, in 1493, the vaults of the central nave were finished during the time of the Catholic Monarchs.

Maria de Molina. A woman of great importance in the Middle Ages. She was Queen Consort of Castile during the reign of her husband Sancho IV “El Bravo” (son of Alfonso X the Wise), as well as double regent with her son Fernando IV and her grandson Alfonso XI. That is to say, a woman who contributed to three different reigns throughout her life, and whose political performance was decisive for the continuation of the Castilian Crown and the consequent drift to the kingdom of Spain. She was more than a queen, mother or grandmother of kings, she was a woman with a great sense of state, who knew how to win the respect of her subjects and the consideration of the rest of the monarchies of the time. 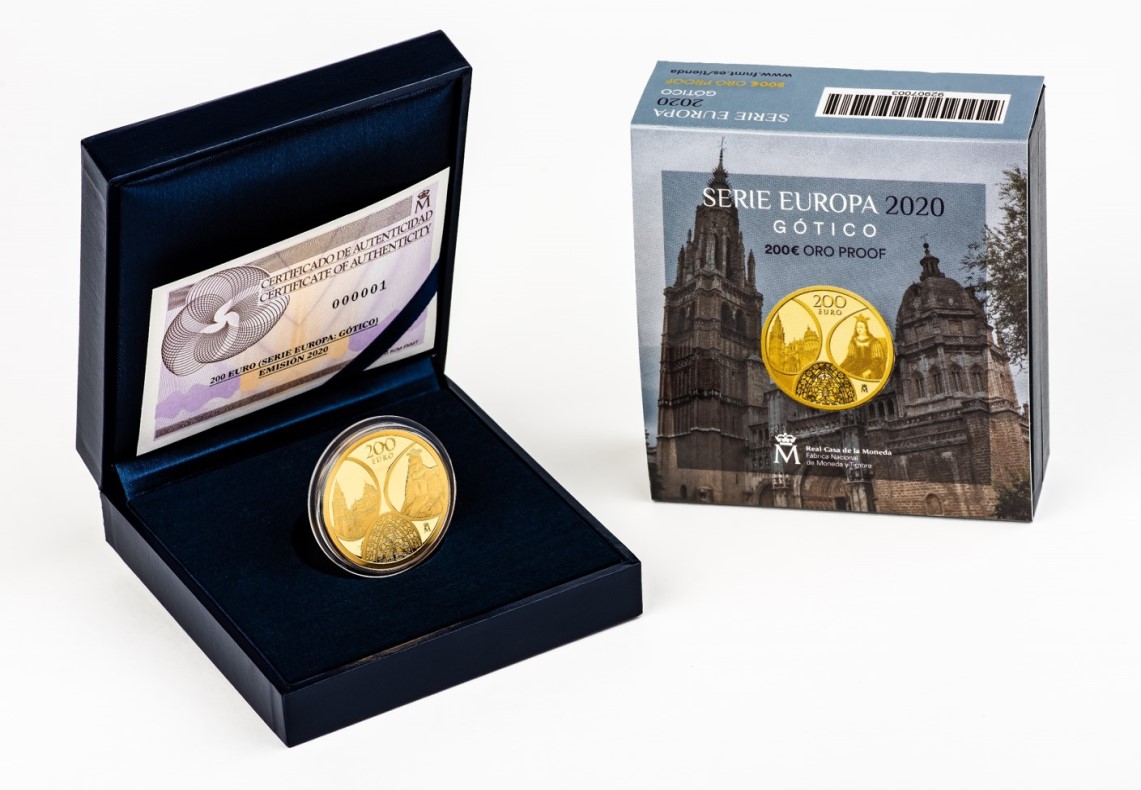 The selected joint theme for the 12th issue of this series is “Historical Trains”. The coins shows some classical trains of the seven different participating countries: Ecuador, Guatemala, Nicaragua, Paraguay, Peru, Portugal and Spain. A commemorative silver medal is included in the collection with the same technical specification as the coins.

The obverses of the coins depict the national coat of arms of the country that issue the coin surrounded by the remaining ones. In the figure you can see the obverse of the Spanish one.

The reverses depict a classical train from each participating country.

Other numismatic issues will complete this 2020 collection such as:

HISTORY OF AVIATION
Royal Spanish Mint will issue a collection of cupronickel coins with a 1,5 € face value dedicated to the History of Aviation. The collection will include 20 coins, Each one dedicated to one plane with a common reverse.

All of them are colored in one side. An album will housed the 20 coins together with some information of every coin, in the same line as our collection History of Navigation.

TREASURES OF SPANISH MUSEUMS
Every year, the Royal Spanish Mint issues a series dedicated to the Treasures of Spanish Museums depicting some masterpieces housed in a well known Spanish Museums.
It is stood as a modern and contemporary art museum.

The permanent collection together with the temporary exhibitions makes it one of the world’s largest museums of 20th Century art. The masterpiece “Guernica” by Picasso is housed there.
This year the paintings will come from Museo Nacional Centro de Arte Reina Sofia, populary known as “El Reina Sofia” This museum is part of the “Golden Triangle of Art“ in Madrid, which also includes the Prado and the Thyssen Museum.

It is stood as a modern and contemporary art museum. The permanent collection together with the temporary exhibitions makes it one of the world’s largest museums of 20th Century art. The masterpiece “Guernica” by Picasso is housed there.
This year the paintings will come from Museo Nacional Centro de Arte Reina Sofia, populary known as “El Reina Sofia” This museum is part of the “Golden Triangle of Art“ in Madrid, which also includes the Prado and the Thyssen Museum.
The collection will comprise three 8 reales silver coins (27 g.), one cincuentin (5 ounce silver coin) and one 8 escudos gold coin (27 g.)

100 ANNIVERSARY OF THE DEATH OF BENITO PEREZ GALDOS
Benito Perez Galdós was a Spanish novelist, playwright and politician. He is considered one of the best representatives of the realist novel of the 19th century. He was nominated for the Nobel Prize in Literature in 1912.
In 1978he appears in the 1000 pesetasbank note.
It is intended to strike a rectangular silver coin

150 ANNIVERSARY OF THE DEATH OF GUSTAVO ADOLFO BÉCQUER
Gustavo Adolfo Bécquer was a Spanish poet and novelist who belonged to the Romanticism movement in literature. His most famous work is “Rhymes and Legends”, a collection of scattered poems and stories, gathered in one of the most popular books of Hispanic literature.
His image appears in the 100pesetas bank note of 1970.
It is intended to strike a rectangular silver coin.