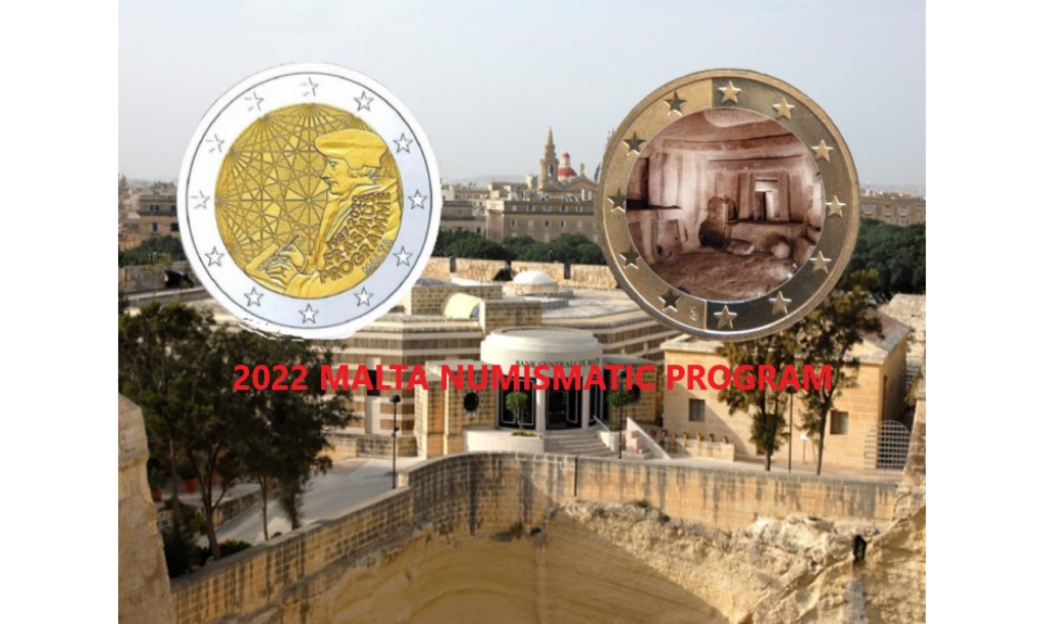 Malta has announced the program of the different coins and coin sets that will be issued in 2022. The Maltese authorities will issue no less than three commemorative €2 coins in 2022. One coin will have a mintage of over 100,000 coins. The second and the last one will have a much more confidential mintage, well below this well-known psychological threshold of the €2 commemorative collector coin market.

Note that Malta will issue a €10 collector coin dedicated to Louis PASTEUR, for the 200th anniversary of his birth!

Malta dedicates in 2022 its annual set and one of the three €2 coins issued to the prehistoric site of Hal Saflieni. The Hal Saflieni Hypogeum is a large structure dug into the ground in Malta. It has multiple chambers or rooms. It is a unique case of a prehistoric underground cemetery, built between 4,100 and 2,500 BC. The Central Bank of Malta plans to issue 150,000 UNC coins and 20,000 coincards. To these mintages, you must add 10,000 coins contained in the annual set, containing itself the 2022 annual divisional series (from 1 cent to €2 coin).

This coin was designed and engraved by NOEL GALEA BASON and minted by the KNM (Netherlands Mint). The coin will be issued in May 2022.

The second coin is part of the joint european issue dedicated to the 35th anniversary of the European exchange program ERASMUS. The Bank of Malta plans to mint 62,500 coins for circulation and 20,000 coins for collectors in coincards. This coin will also be minted by the KNM. The issue date has been set for July 2022.

It should be recalled that the design of the obverse of this coin is the work of J. JIMENEZ, engraver in chief of the Monnaie de Paris (french mint).

The last €2 coin of 2022 is dedicated to the United Nations resolution for security and peace for women in the world.

The Maltese NCB will issue 3,000 coins in BU quality boxes and 50,000 coins in coincards. The latter coin is therefore intended for the collectors’ market only. It was designed and engraved by Antonella NAPOLIONE. The KNM (Netherlands Mint) will ensure the minting of this coin.

The Maltese NCB will issue a silver coin of 10€ and a gold coin of 50€ dedicated to MAGELLAN’s world tour by sea.

Agostino LEVANZIN (1872-1955) worked as a journalist and tried to set up a Labour Party on the island of Malta. But this last attempt failed. He was above all a professor of philosophy of Maltese origin who taught in the United States. He had acquired a certain academic reputation there, notably by publishing articles and a book devoted to fasting.

An amusing adventure concerning him is reported in the April 29th 1934 issue of “L’Ouest-Eclair” (a french local newspaper). This daily newspaper reported a persistent rumor within the walls of the city of Saint-Malo. The famous Russian revolutionary Leon Trotsky was said to be residing in the city under an assumed identity, that of Auguste Levanzin. This major Breton daily reconstructed the schedule of the presumed Moscow leader, interviewing many witnesses and thus substituting itself for the police.

But the very next day, the Rennes-based newspaper was forced to backtrack by reporting “the unpleasant misadventure” of a foreign scientist.  Auguste Levanzin was in fact Agostino Levanzin, a philosophy professor of Maltese origin. Far from being the dangerous seditionist presented on April 29th 1934, the man’s only internationalist commitment was his practice of Esperanto. The misunderstanding is perhaps due to his physical appearance, similar in many ways to that of the Russian revolutionary…

€10 and €100 dedicated to the Maltese National Anthem

“The Innu Malti” is the national anthem of Malta. It was written by Dun Karm, one of the greatest Maltese poets, and composed by Robert Sammut. The anthem was originally a school song in the form of a prayer. It was first played on February 3rd 1923, was declared Malta’s anthem in 1941 and became the official national anthem at independence on September 21st 1964.

€10 dedicated to the 200th anniversary of Louis PASTEUR

The 2022 annual set is also dedicated to the prehistoric site of Hal Saflieni. It contains the annual series of 8 circulation coins with 2022 yearmark and the €2 commemorative coin 2022 dedicated to this same topic.

Queen Elizabeth II is celebrating her Platinum Jubilee as Queen of the United Kingdom and the Commonwealth this year. It is the first time that a British monarch has reached this milestone. To celebrate the anniversary, the Royal Dutch Mint is minting two official commemorative coins in collaboration with the Central Bank of Malta.  Queen Elizabeth has a special bond with Malta.  Apart from the fact that she was Malta’s Queen until 1974 before the Island became a Republic, she lived there from 1949 to 1951, when Prince Philip was stationed in Malta as a naval officer.The Malta Coin Centre will be offering you on a first come first served basis, the possibility to pre-order the below coins and coin cards.

Seventy years ago, on 6 February 1950, Queen Elizabeth II ascended the throne of the United Kingdom and the Commonwealth of Nations. To celebrate the platinum anniversary, the Royal Dutch Mint shall mint an official commemorative 2.5 euro in coin card, in collaboration with the Central Bank of Malta. 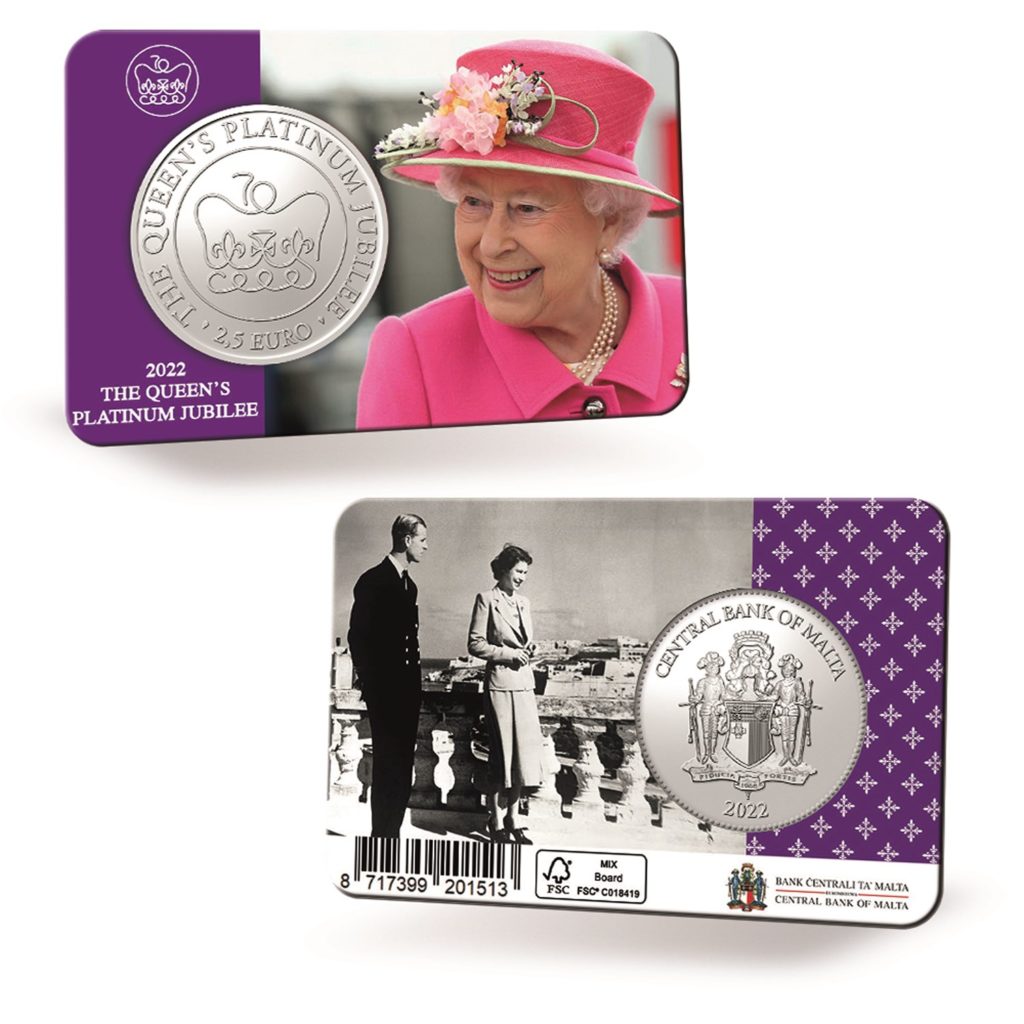 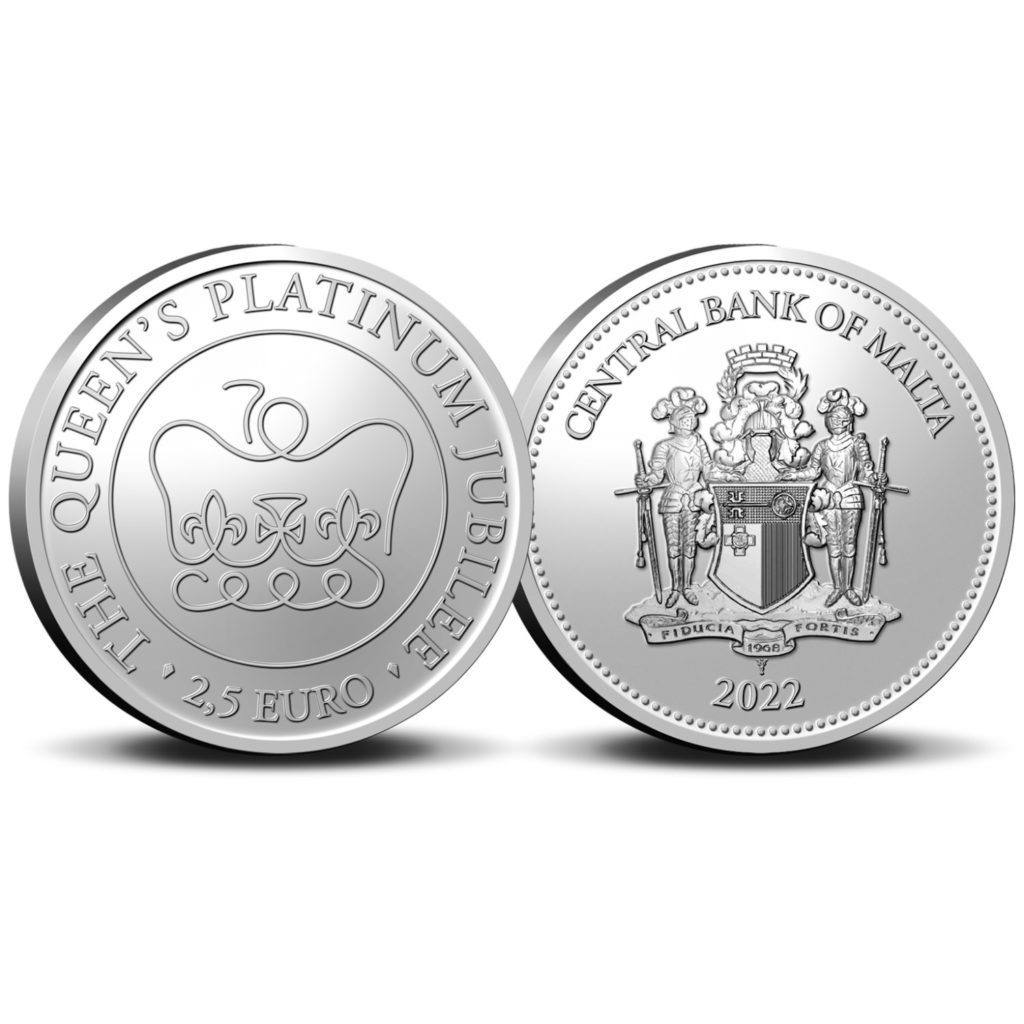 The silver issue is entirely dedicated to the Jubilee and comes in a purple wrapper with the official Jubilee emblem. The obverse of the coin also features the purple Jubilee emblem surrounded by the inscription “Queen’s Platinum Jubilee” and the denomination. The reverse features the Central Bank of Malta logo, the mintmark and the year. 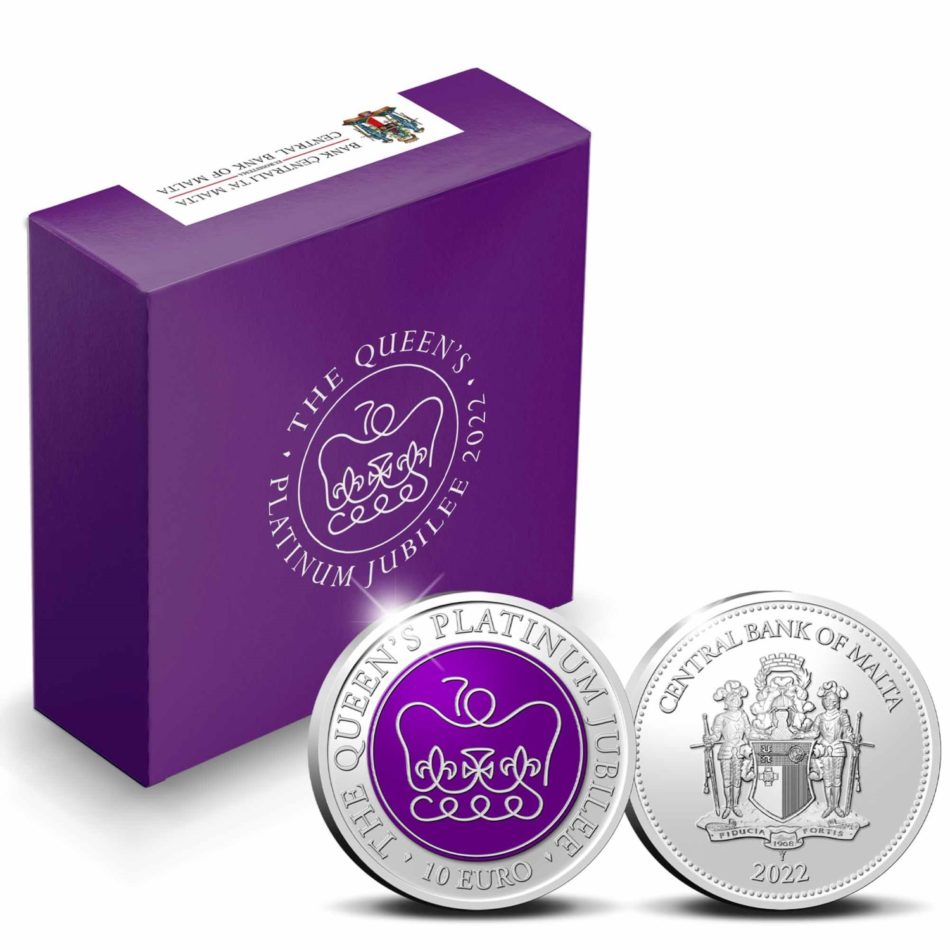 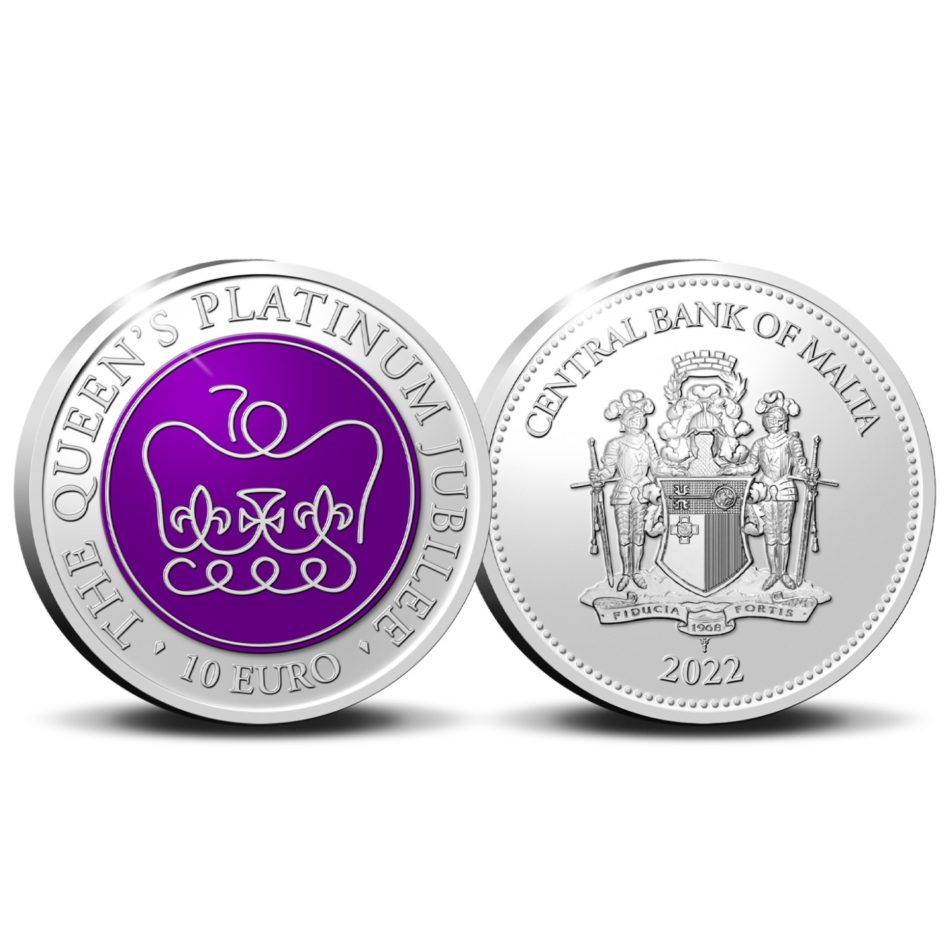