A few days before the opening of 2020 Berlin World Money Fair, the south african mint unveiled some of its numismatic issues for year 2020.

A new chapter in the award-winning Natura series began with the introduction of the palaeontology theme in 2018, in recognition of South Africa’s significance to this field and study of plant and animal fossils. The first instalment of the palaeontology-themed 24ct gold coins focused on ‘Rise of the dinosaurs – Archosauria, and as a response to popular demand, the South African Mint release the very first silver Natura coin under this theme in 2019.

The South African Mint is proud to introduce the 2020 silver Natura coin, the second ever silver coin to join the Natura series. This coin also focuses on the ‘Rise of the dinosaurs – Archosauria’ theme and bears the same image as the 2018 1oz 24ct gold coin – the Coelophysis rhodesiensis

This R25 fine-silver coin features the Coelophysidae which were highly successful primitive theropod dinosaurs that lived worldwide from the late Triassic to early Jurassic. Coelophysis rhodesiensis, a small, agile dinosaur which preyed on small animals, inhabited South Africa and Zimbabwe during the early part of the Jurassic period. This slenderly built, bipedal dinosaur grew up to 3 m long and weighed about 32 kg. The obverse depicts the fossilised skull, neck and shoulder of an Erythrosuchus africanus. The words ‘Rise of the dinosaurs’, ‘Archosauria’ and the year 2020 as roman numerals ‘MMXX’ complete the obverse design.

Struck for the first time on 3 July 1967, with the aim of marketing South African gold, this legend in the coin industry was conceived when the concept of a legal tender gold coin linked to the daily gold price was introduced in South Africa.

The effigy of Paul Kruger, the first President of the Zuid Afrikaansche Republiek (ZAR) is depicted on the obverse. The reverse was originally designed and engraved by the famous sculptor, Coert Steynberg, and features one of South Africa’s national animal, a Springbok. 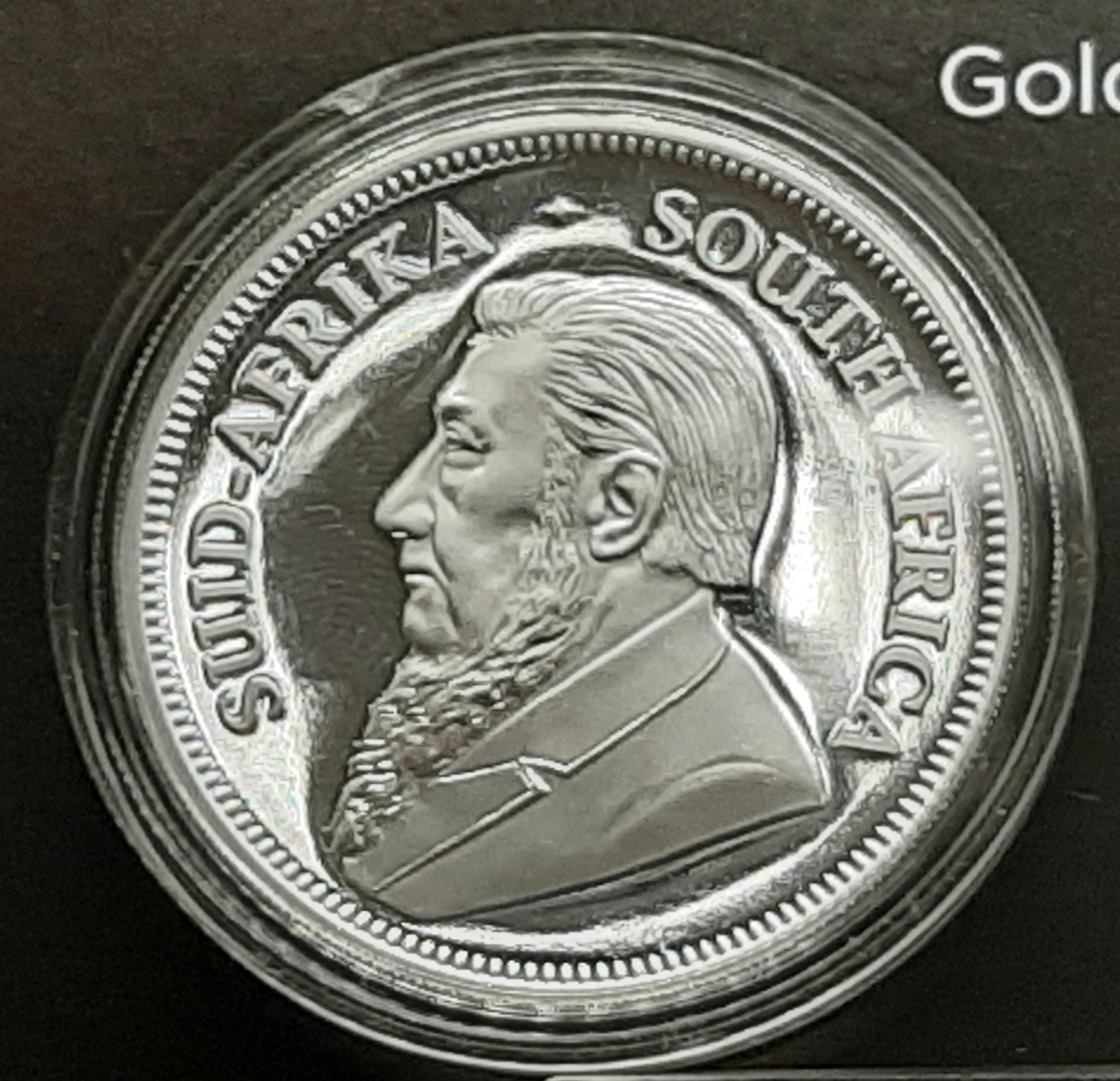 The 2oz silver Krugerrand makes its debut in 2020, after the popularity of the 2oz gold Krugerrand, introduced in 2018. 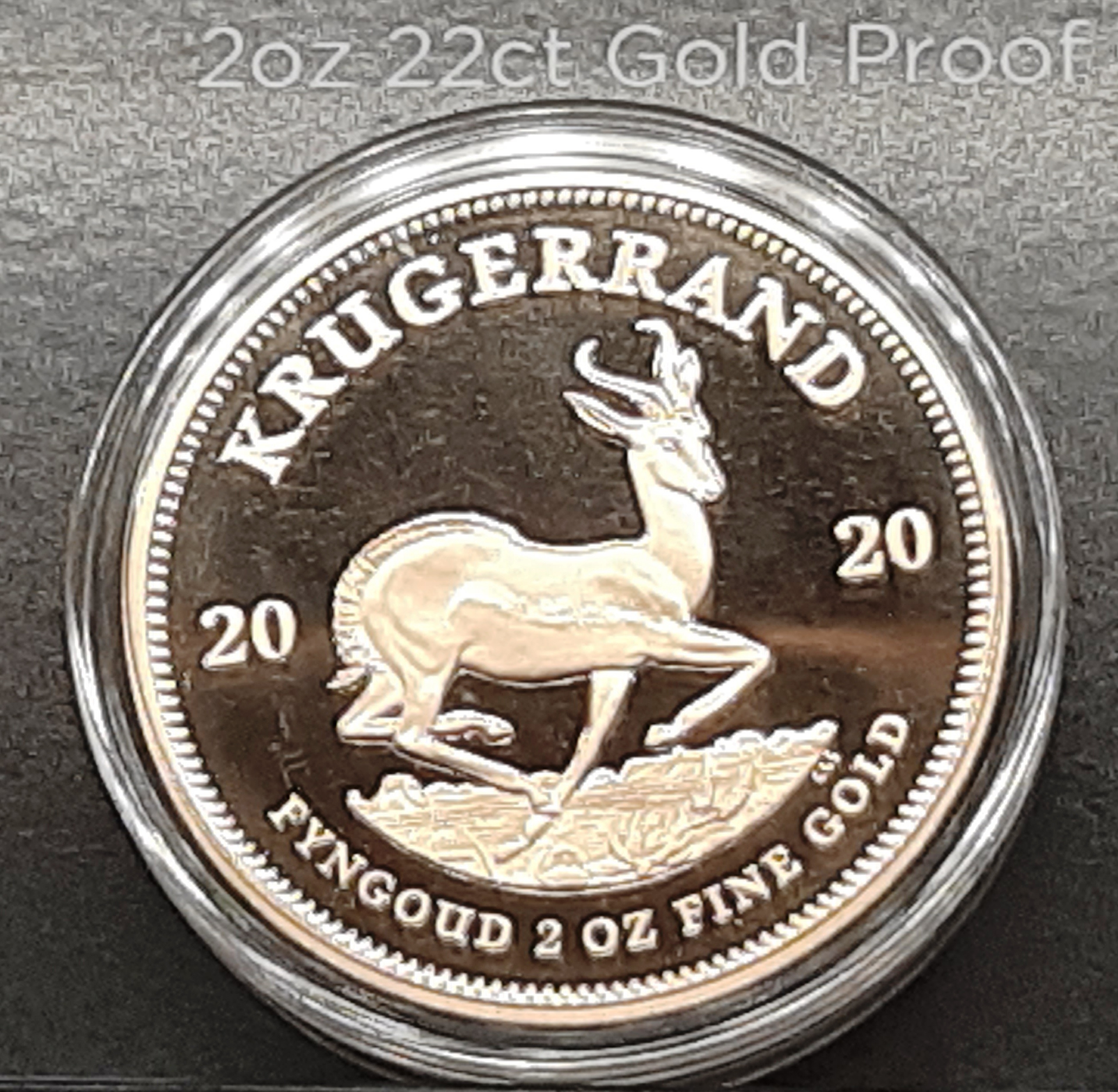 Limited Edition: 400Launched in 2018, the 2oz gold proof Krugerrand has been highly popular and is back in 2020 by popular demand.

Introduced for the first time as part of the 50th anniversary range, the 1/20oz gold coin makes a return in 2020, but only as part of the ‘Prestige Set’

The smallest gold coin available from the South African Mint and introduced for the first time with the 50th anniversary range, the 1/50oz coin also forms part of the various Krugerrand sets available in 2020.

The obverse design of these coins bears the breath-taking design of the African Rhino, which fills up much of the surface area of the coin. The words ‘South Africa’, ‘Big 5 2020’ appear below the image, with South Africa’s national coat-of-arms in the centre. 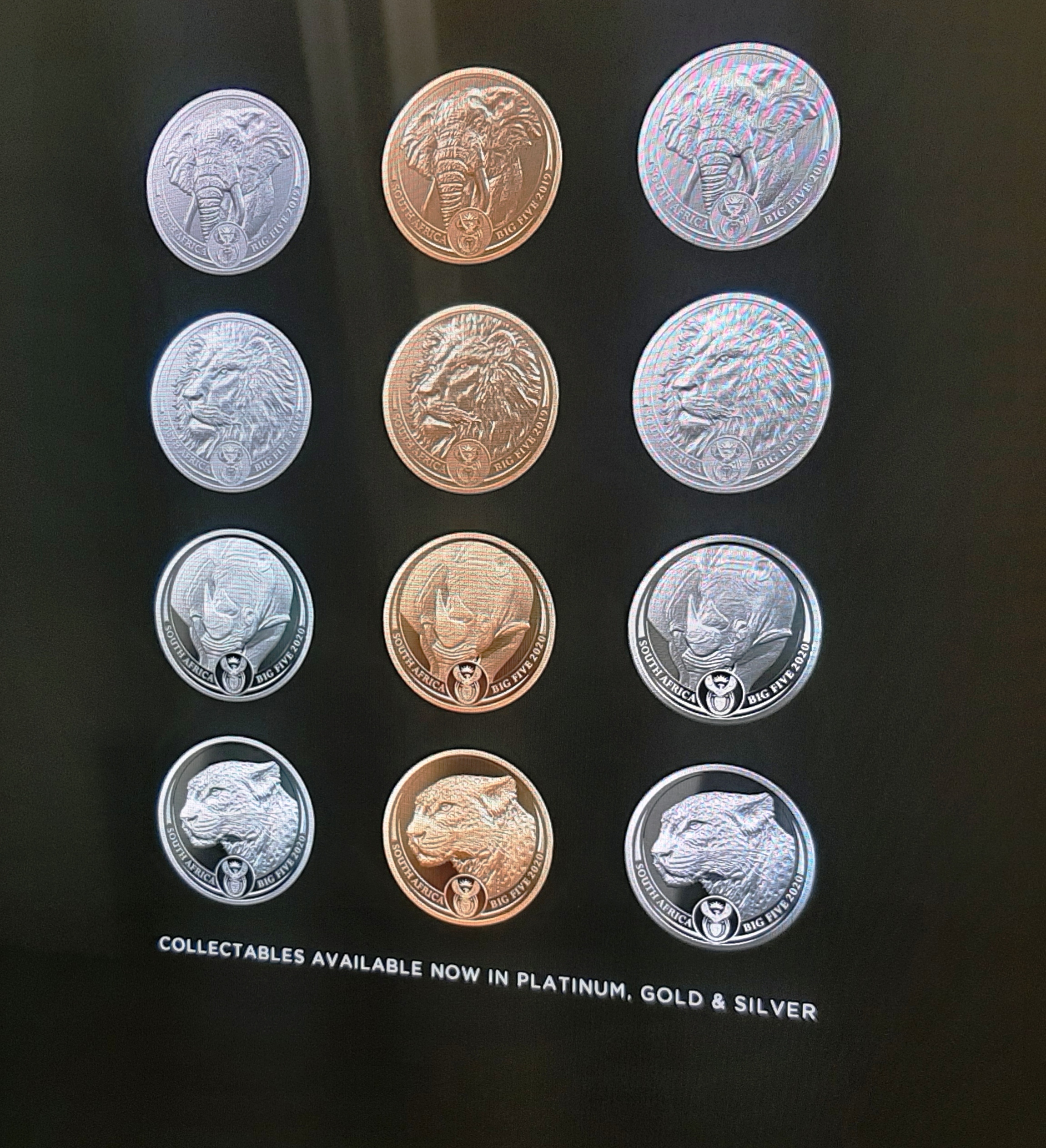 The reverse of the coin features two halves of the rhino’s face, detailing its eye, ears and horn. This ingenious design allows for a complete close-up of a rhino to be seen only when two of the coins are placed next to each other. 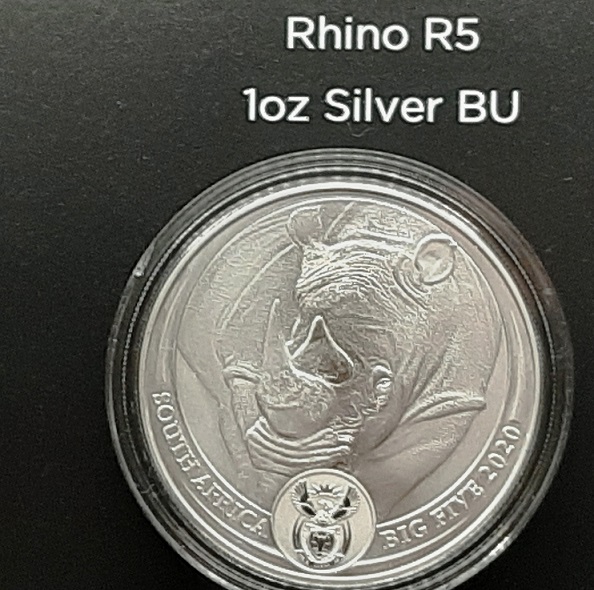 First pictures of the two next coins of the series have been presented in Berlin, during 2020 World Money Fair. 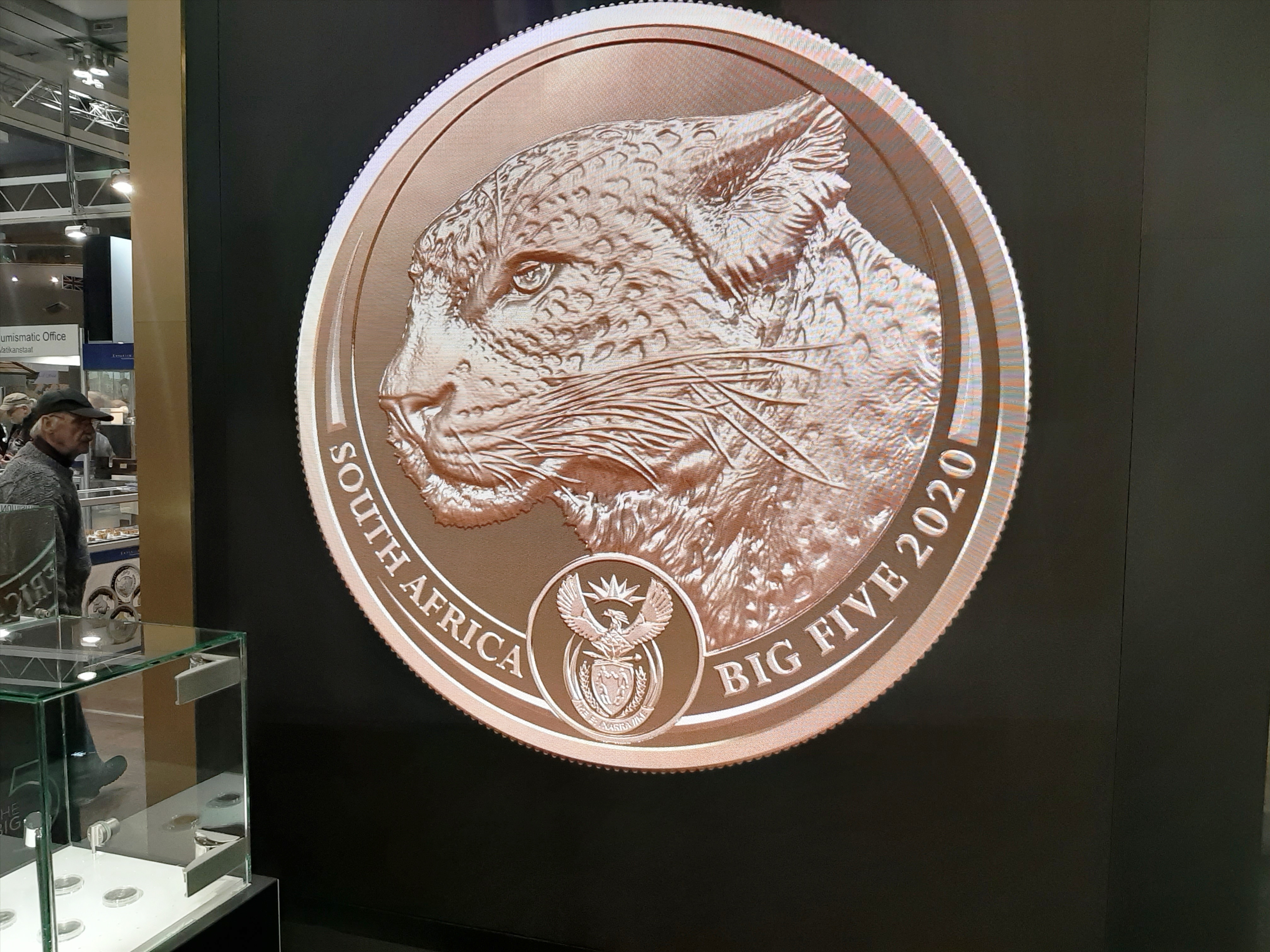 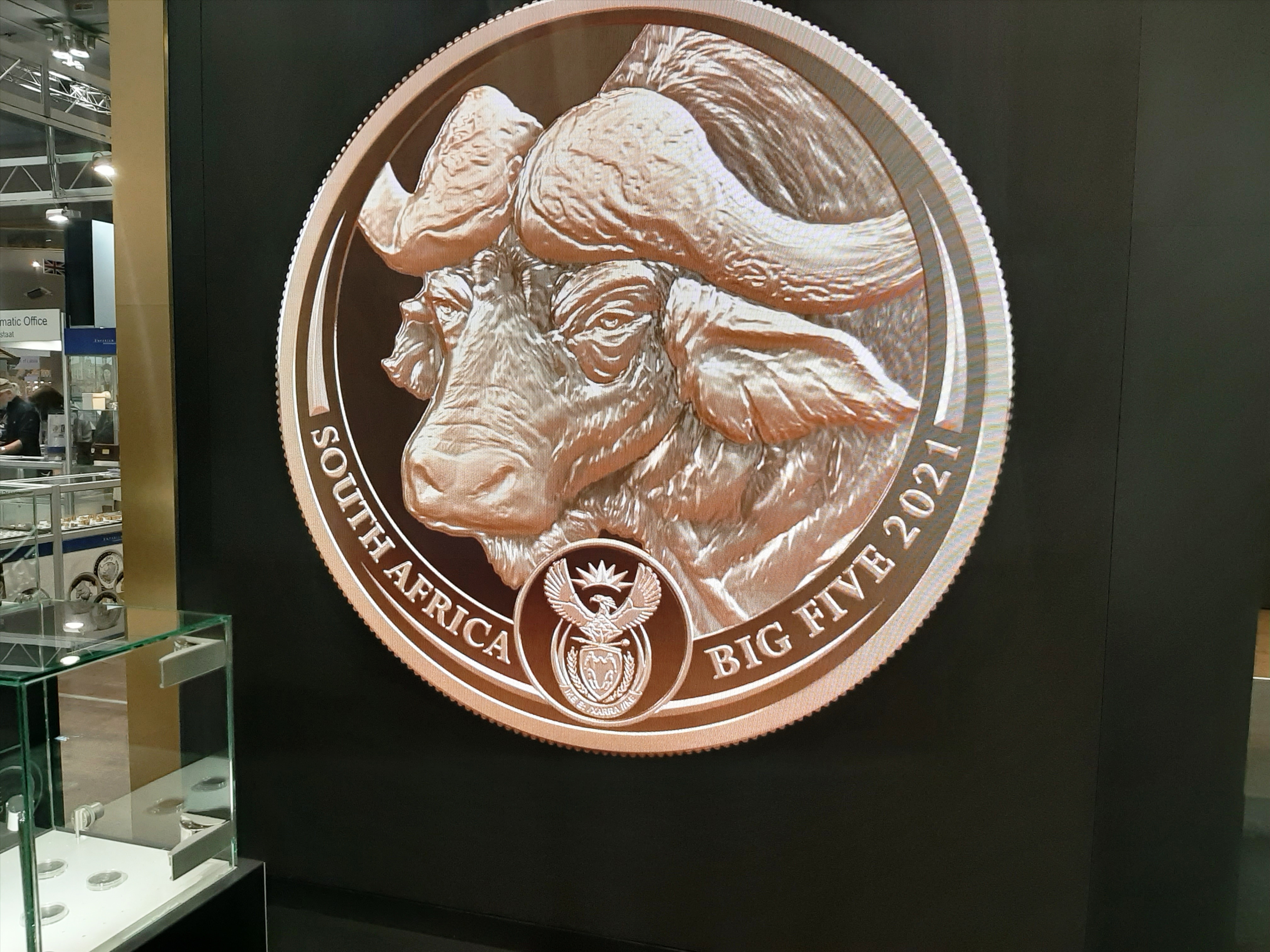 For this series, South african mint trade one ounce coins made of silver, gold or platinium. 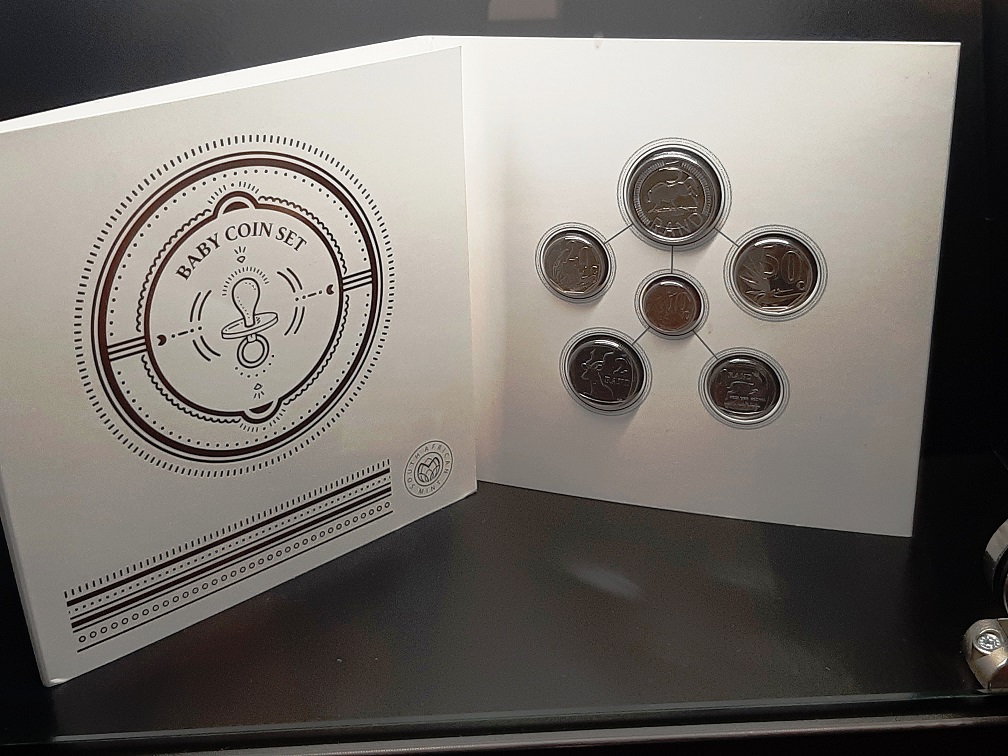