During the 2020 World Money Fair, NUMISMAG met the head of the bank of Latvia for the numismatic department.

She gave us the main lines of the Latvian 2020 numismatic program.

The Bank of Latvia announces 5 commemorative coins for:

On this leaf-shaped piece was reproduced a part of the street network of the city of Riga. It was designed for its inhabitants, connecting them to places in the urban environment, such as the veins of a leaf carrying substances through it.

The shape of the piece is that of a linden leaf. It is one of the most common and resistant trees to be found in Riga. This tree, which lives between 200 and 300 years, symbolizes one of the city’s most valuable resources.

Lime trees capture large amounts of dust and in return give city dwellers clean air. In one year, a healthy tree produces oxygen for at least 10 people.

The graphic design of the collector’s piece was created by the artist Mārcis Kalniņš, and the author of the plaster model is Ligita Franckeviča.

The coin was minted by Koninklijke Nederlandse Munt (Netherlands Mint) and the announced mintage is 5,000 coins.

This collector’s item is dedicated to art in Latvia in the 1960s, known as the “thaw period”, associated with the political developments of that time.

The thaw raised hopes for a greater degree of freedom and well-being among the population.

This piece features graphic elements taken from the works of some of the well-known authors of that time such as the architect Marta Zigrīda Staņa, the artists Zina Ulste, Gunārs Kirke and Uldis Razums.

The graphic design of the collector’s piece “Modernism in Latvia – The 1960s” was created by the artist Sandra Krastiņa. The plaster was made by Jānis Strupulis.

The Latvijas Banka silver collector’s item is dedicated to the fossilized remains of the “Ventastega curonica”, found in the basin of the Venta River near Skrunda in Kurzeme.

The Ventastega was a four-legged predator with a length of a little more than one meter. It lived about 365 million years ago. At that time, the territory of present-day Latvia was located a few degrees south of the equator, at the southeastern edge of the Eurasian paleo-continent.
The rocks and fossils of animals and plants preserved here are the only evidence of those ancient times. Only a few discoveries of Devonian tetrapod fossils are known today.

On this piece, the skeleton of the ventastega is marked by a photo-luminescent impression.
The graphic design and the plaster model of the collector’s piece were created by the artist Ivars Drulle.

A tetrapod Ventastega curonica comes out of shallow water on land. Its skeleton is marked with a photoluminescent impression.

The course of time over millions of years has been represented in a stylized way by dots and lines.

The approximate date around which this prehistoric animal lived is shown on this side of the coin.

This coin was minted by Koninklijke Nederlandse Munt (Netherlands Mint).

The maximum announced mintage is 3,000 coins. 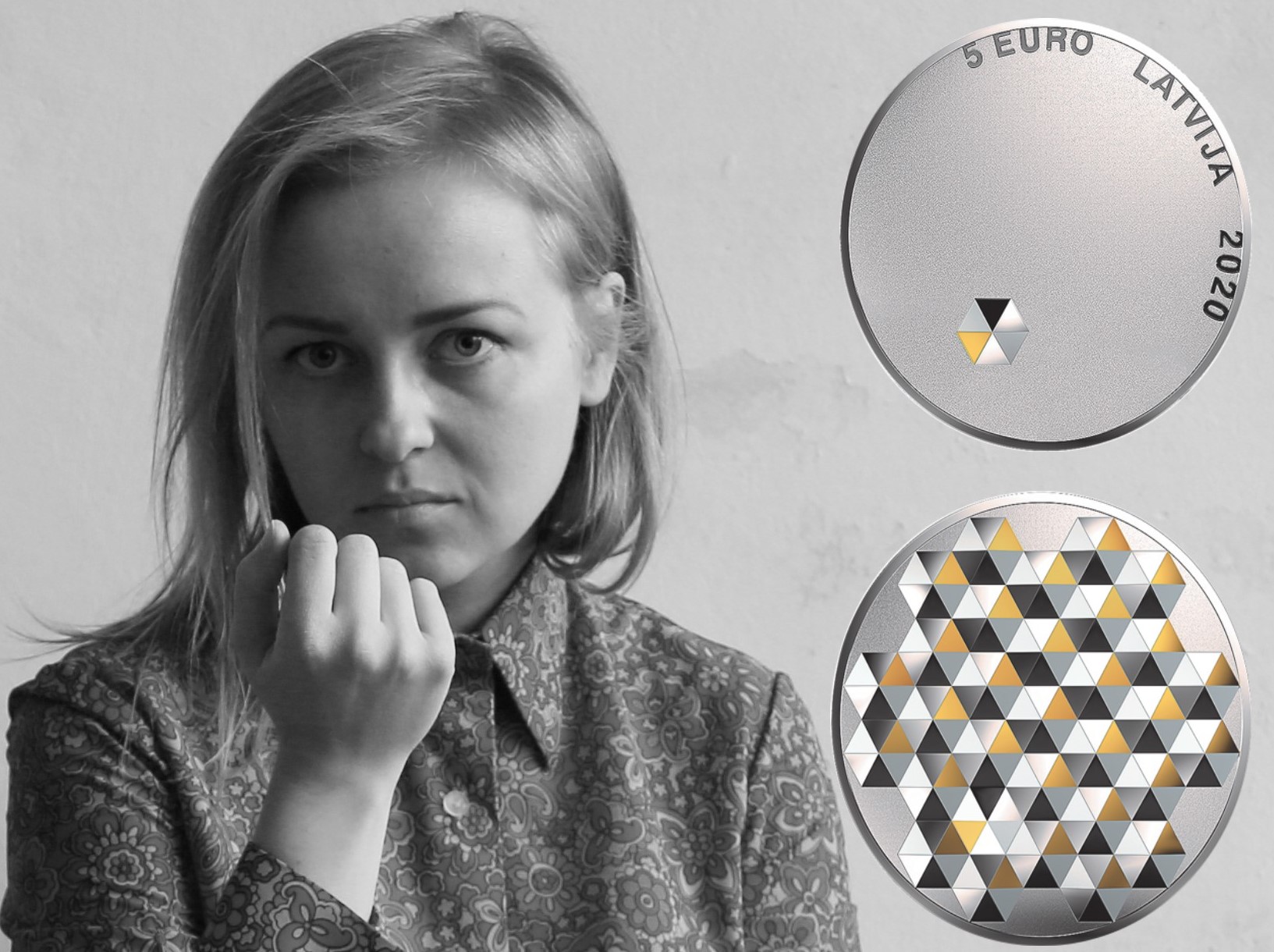 The Bank of Latvia is planning to issue next spring a 2 euro commemorative coin “Latgalian Ceramics” dedicated to Latgalian pottery.

Latvian pottery is part of the Latvian cultural canon.

The new commemorative coin features a candelabrum – a typical Latvian ceramic candleholder. Latgale and Kurzeme saw the traditional pottery making develop over a long period of time. But it is in Latgale that it has been preserved over the ages and passed on from generation to generation.

The engraver of the national side of the new commemorative coin is the artist Gundega Rancāne, while the author of the plaster model is Jānis Strupulis.

The coin “Brilliant Uncirculated” in coincard was minted in the amount of 5,000 coins.

The national side of the commemorative coin bears the inscriptions “LATVIJA” (“Latvia”), “LATGALES KERAMIKA” (“Ceramics of Latvia”) as well as the year of the coin (2020).

The edge of the coin, like all other 2-euro coins in circulation in Latvia, bears the inscription “DIEVS * SVĒTĪ * LATVIJU *”. (“God bless Latvia”).

The €2 coin was struck by the UAB Lietuvos monetų kalykla (Lithuanian Mint). 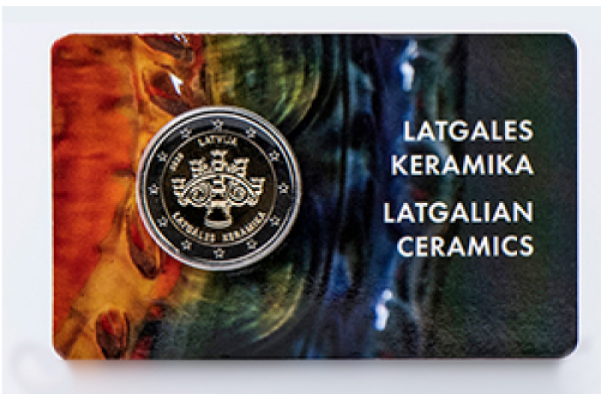 400 000 €2 commemorative coins will also be struck for circulation. 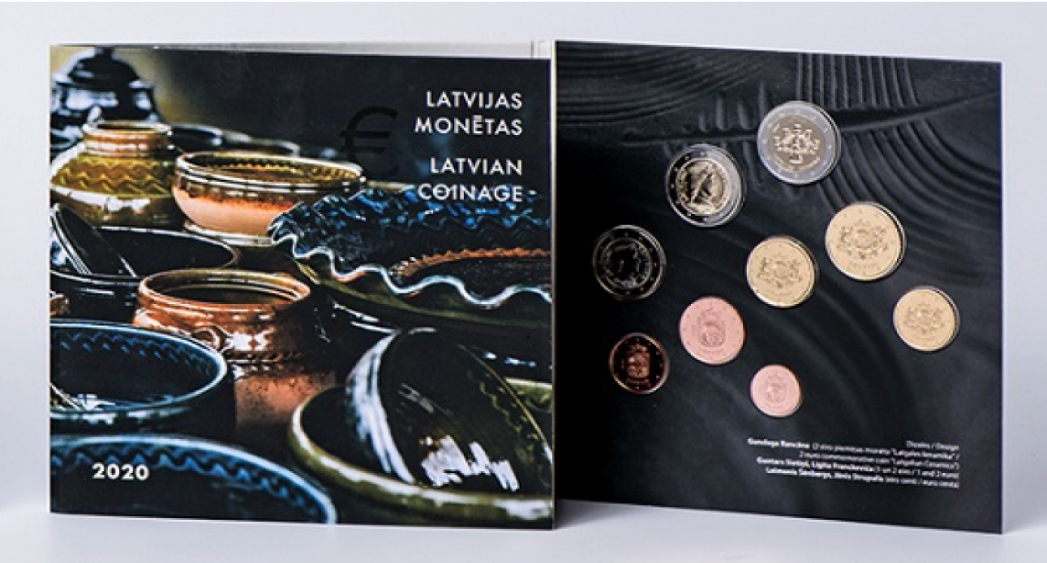 All the coins are minted by the Mint of Lithuania, a neighbouring country of Latvia with proven experience in coin strike.

All the coins are outsourced by the Bank of Latvia to local artists.