Malta unveiled in february 2020 its numismatic program for year 2020.

AS usual for several years now, the Central Bank of Malta will issue two €2 commemorative coins. The first one is the fifth coin of prehistoric sites series. The second one is part of coin design competition series.

The CBM will also issue gold coins with a very low mintage.

The rarest will be the one once gold coin dedicated to 75th anniversary of peace in Europe. Only 100 coins will be minted!

250eme anniversary of the birth of Beethoven 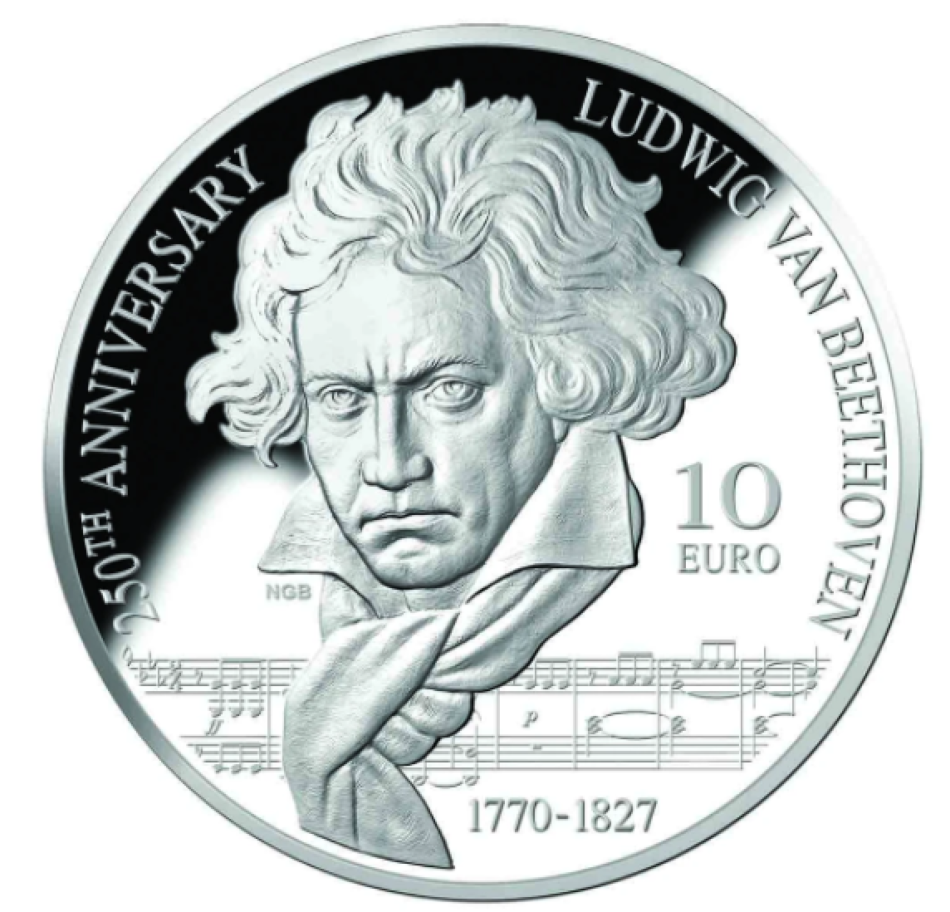 It is the 5th coin of the series.

Skorba is a UNESCO World Heritage Site found in the hamlet of Żebbiegħ at the limits of Mġarr. The temple ruins – which are believed to date to around 3,500 BC – were built on top of an earlier settlement dating to around 5,000 BC.

The site was first brought to the attention of Temi Zammit in the early 20th century. Some archaeological investigations were conducted in 1937, but the site remained virtually untouched until the excavation campaigns undertaken by British archaeologist David H. Trump in the 1960s.

This coin is the fifth in a series of seven dedicated to the Malta’s unique prehistoric sites.

The coin reverse shows the common €2 side. The obverse (national side), designed by Noel Galea Bason, shows a representation of Ta’ Skorba Temples.

Coins will be struck by Monnaie de Paris. 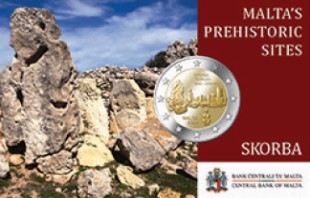 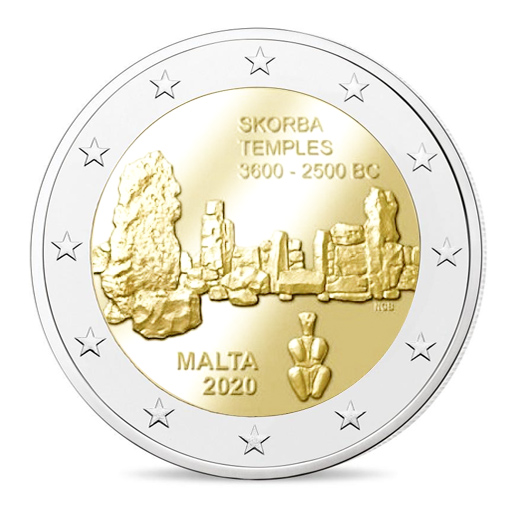 The Central Bank of Malta has issued numismatic coins in gold and silver depicting an illuminated letter from the L’Isle Adam Graduals. The coins form part of the Europa Programme with the theme ‘Gothic’ and bear the Europa Star logo.

The obverse of the coin features the coat of arms of Malta and the Europa Star logo. The reverse of the coins depicts an illuminated letter O found in the L’Isle Adam Graduals, which are housed in the museum of St John’s Co-Cathedral. Colour printing techniques have been used on the coins to reproduce the chromatic and aesthetic qualities of the original artwork.

The L’Isle Adam Graduals, which date to around 1533, are considered to be Malta’s finest illuminated manuscripts. They consist of a set of ten choir books commissioned from a French scriptorium by Grand Master Philippe Villiers de L’Isle Adam. These graduals were produced quite some time after the advent of printing, epitomised by the Gutenberg Bible of 1455. This reflects the complexity of printing music scores, which ensured that the production of manuscript choir books – largely using medieval techniques – survived into the 16th century.

The annual set is dedicated to Skorba prehistoric site. 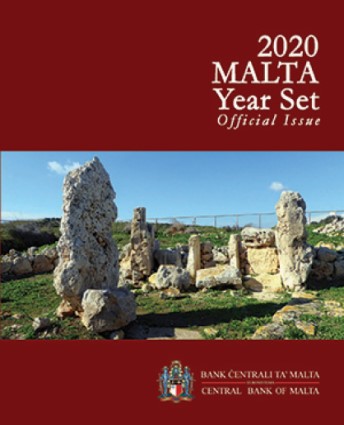 The Malta Armed Forces Act, which came into force on 22 September 1970, made provision “for the raising and maintenance of armed forces in Malta and to provide for matters connected therewith or ancillary thereto”. With this instrument, Malta could set up its own standing armed forces.

On 1 October 1970, 500 Maltese officers and men of the Royal Malta Artillery, an old and distinguished regiment, ceased forming part of the British Army and became part of the Malta Land Force, which some time later was designated as the Armed Forces of Malta.

The coin design was made in collaboration between the Central Bank of Malta and the Armed Forces of Malta.

On the reverse, the coins feature the regimental badge of the Armed Forces of Malta on a red-on-blue coloured background. On the obverse is the coat of arms of the Republic of Malta together with the year of issue. 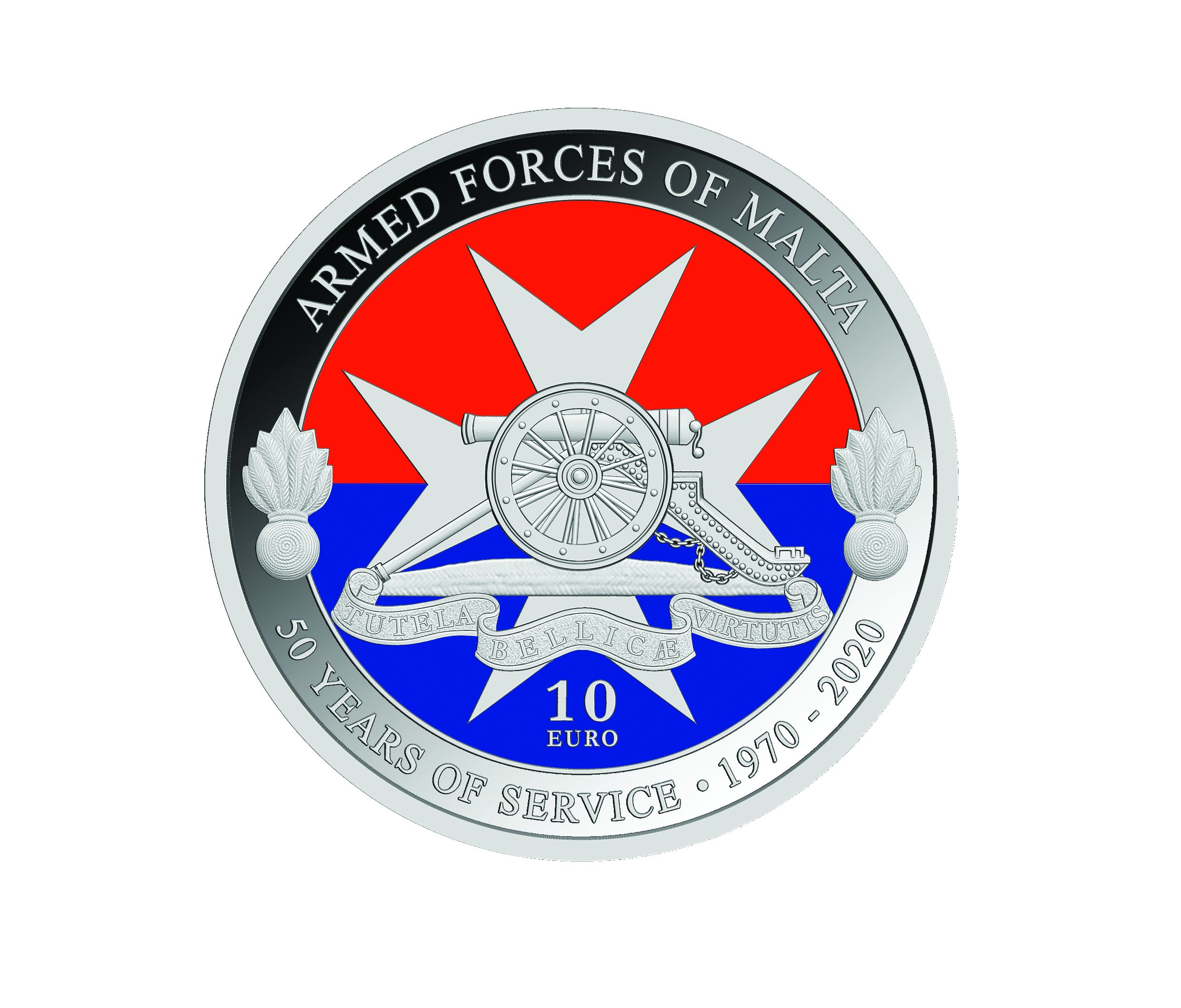 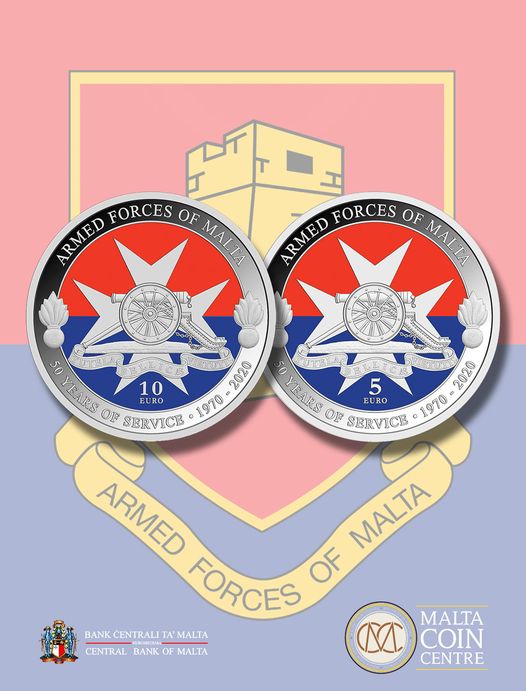 This important historic milestone will also be marked with €10 silver coin and a special limited-edition gold coin weighing one ounce. This coin, which is limited to a hundred pieces, was exclusively available to platinum package holders.

World War II broke out on 1 September 1939 following the invasion of Poland by Nazi Germany. Malta, which formed part of the British Empire, remained relatively unaffected until Italy declared war on Britain on 10 June 1940. Malta suffered the first air-raid the following day. This was the start of a three-year ordeal during which Malta endured more than 3,000 air-raid alerts in the course of which some 16,000 tons of bombs were dropped on the islands. Malta was incessantly bombed, isolated and almost starved into submission. Nevertheless, the people and defenders of Malta prevailed in the face of adversity, death, loss and privation.

The obverse of the coins features the coat of arms of Malta, while the reverse depicts three Gloster Gladiator bi-planes in flight over the Maltese islands. The artist – Noel Galea Bason – chose these aircrafts, dubbed Faith, Hope and Charity, as they epitomise Malta’s unequal fight against the might of the Axis forces, and remain one of the enduring symbols of Malta’s wartime experience.

Another €100 gold coin is forecast on the same topic. 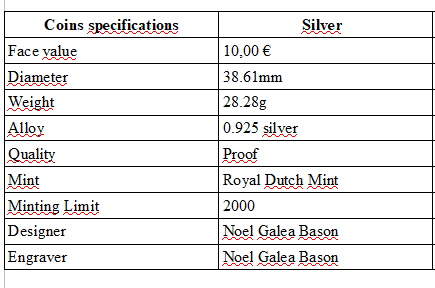 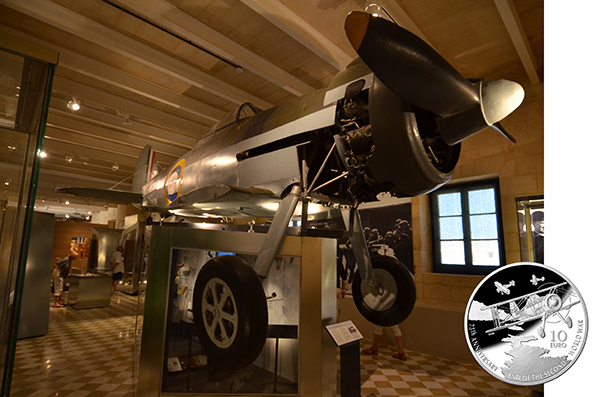 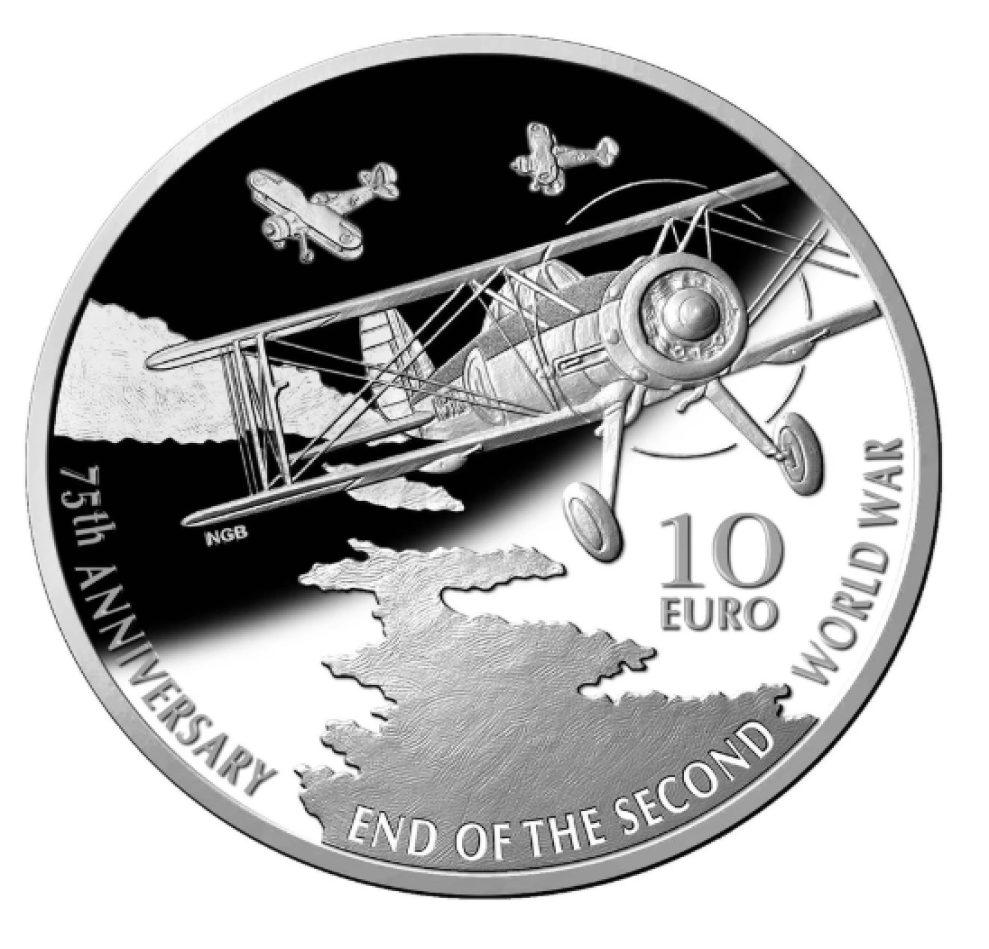 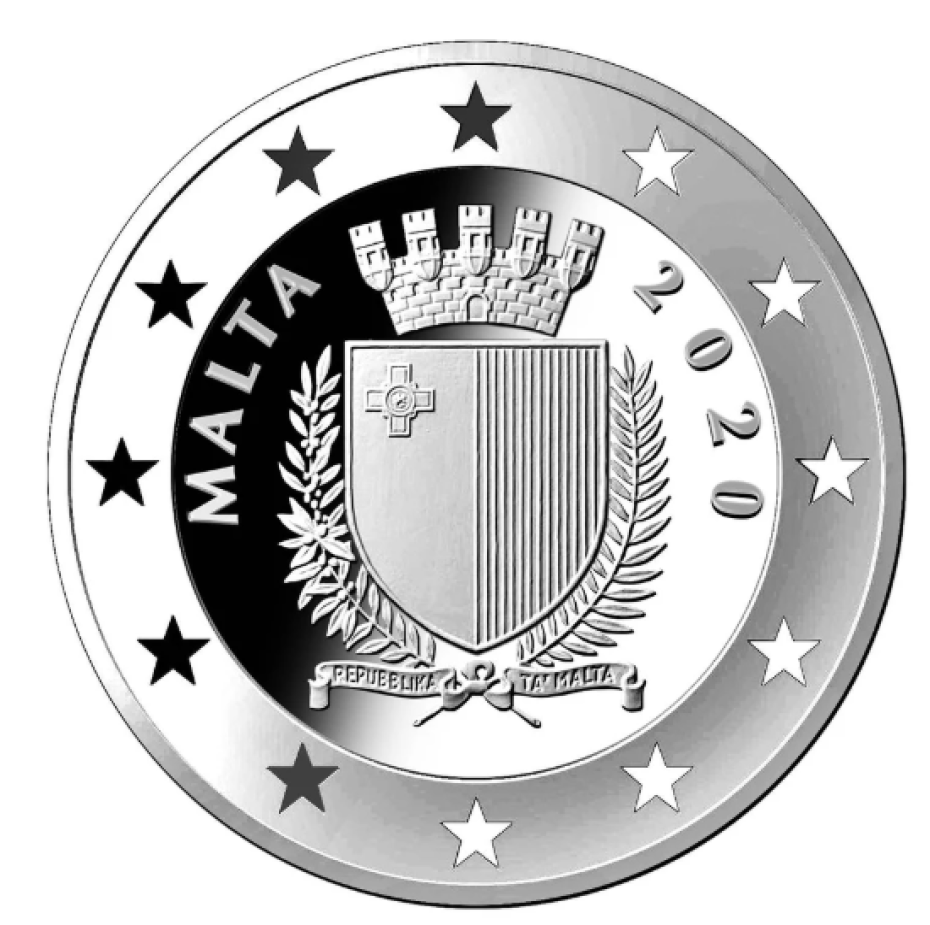 Gold bullion coin, named Melita, after Malta’s ancient name. This coin is issued by the Central Bank of Malta, in collaboration with Lombard Bank plc.

The coin features the figure allegorical of Melita on the obverse and the emblem of Malta on the reverse.

It is possible to order the coin by internet or at central bank counter in LA VALETTA. 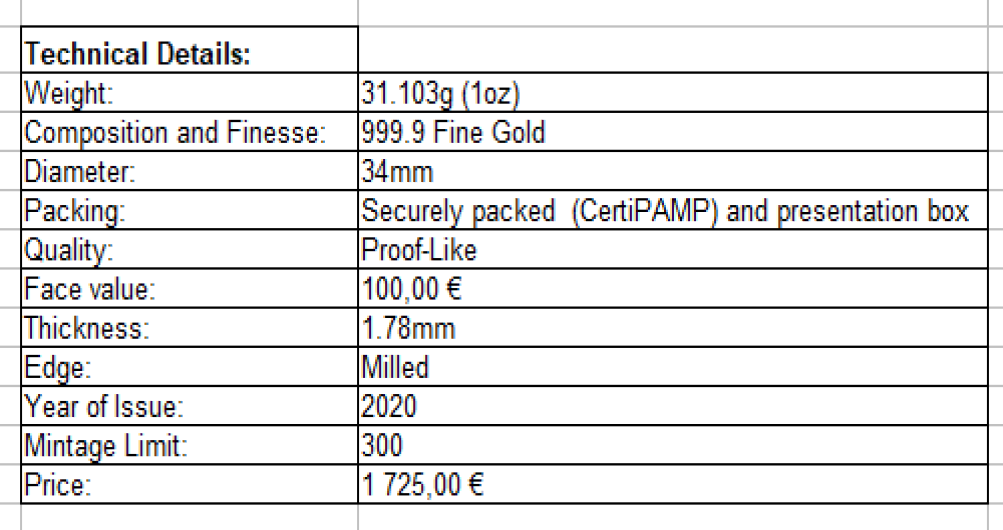 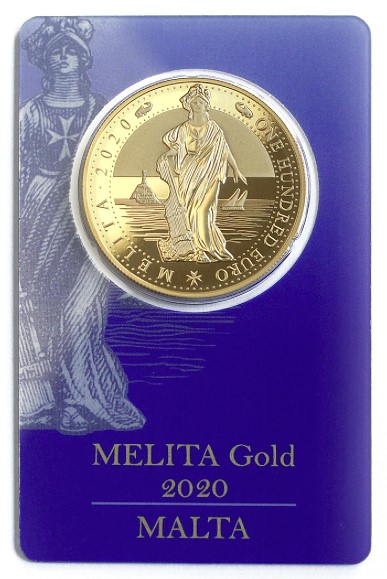 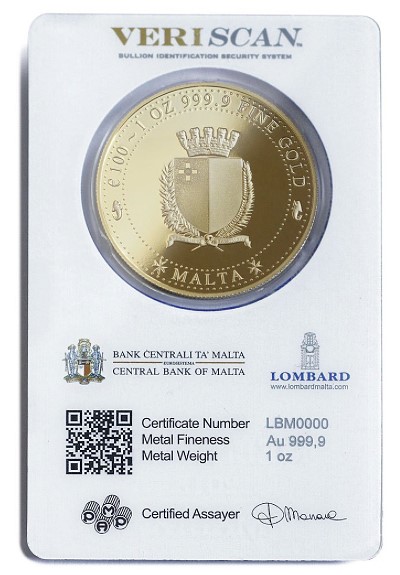 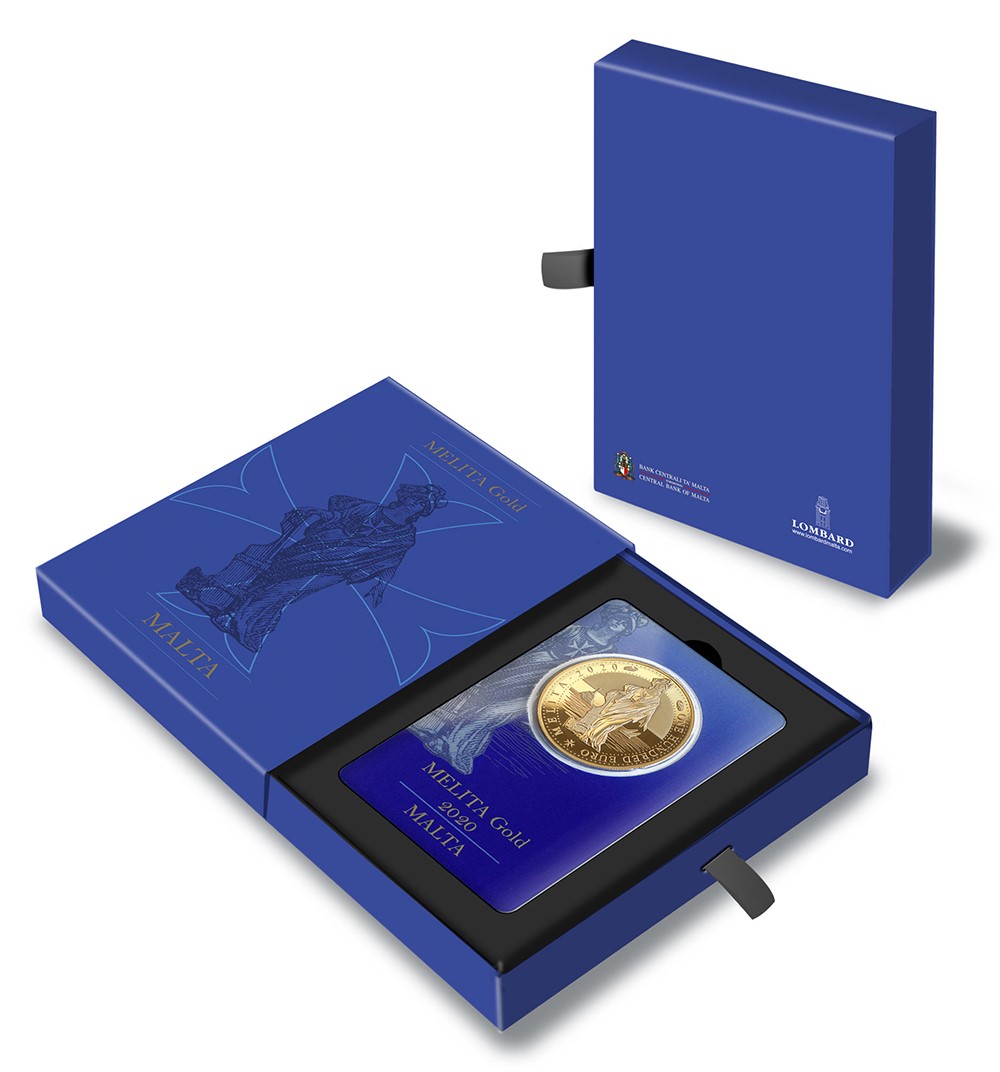 The designer of this coin, Ymen Riahi, was the winner of a competition held for secondary school students.

Coins are struck by Monnaie de Paris, the french mint.